Last year, my old friend Jimmy James decided to leave the sweltering heat of the Arizona desert to go live in France for a while. Best I can tell, he has been making pretty good use of his time over there in true drunkcyclist style. Riding bikes a whole bunch and trying to drink the countryside dry. He text me from Mt Ventoux the other day and I told him he better give me a full report once he finished his little tour and sobered up.

It seems like things may have gotten a bit foggy by the end of the day. But here is a good little story nonetheless.

We arrived at the base of Ventoux well after dark the night before the stage. But our late ascent of the mountain meant that the people there had enough time to already have enjoyed a few cold beverages. They were excited enough to chase and cheer on a couple of North American scumbags rolling up with lights and camping gear as if we were in the last few kms of the race itself. Spoiler alert – that was about the most extreme excitement I would witness for the whole adventure. It was fun though. I, for a moment, felt like I was almost as good at riding bikes as I am at skulling beers. 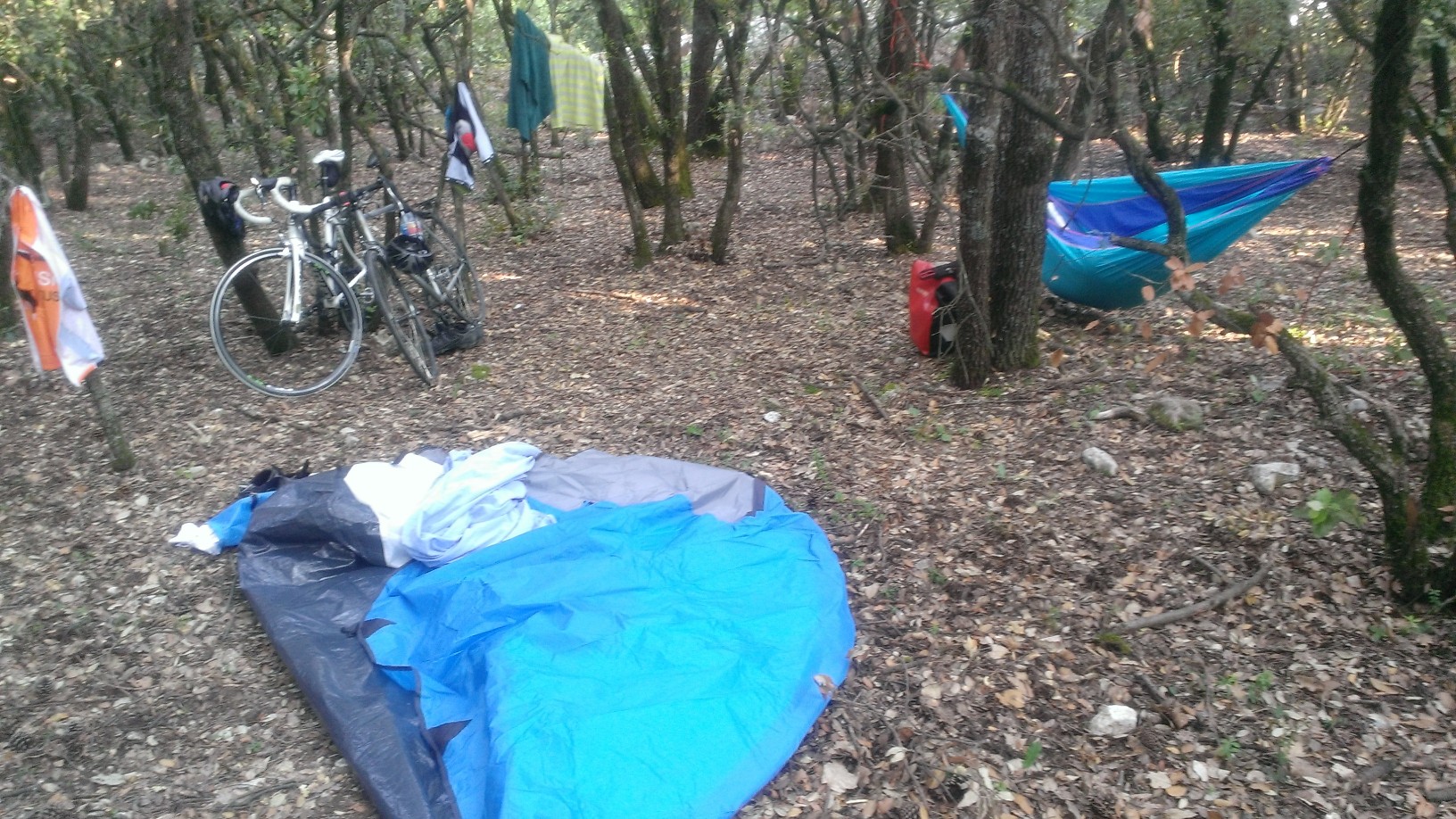 The ol’ campsite was just a few meters from the route and we woke up bright and early to the last few smog spewing camper vans and cars trying to make it up the Ventoux before the Le Police shut down the road at 8am. It felt a lot earlier after not getting camp set until after 1am. It was time to get motivated, strap on the spandex and bury in the bushes anything that wasn’t coming the rest of the way up the mountain with us. 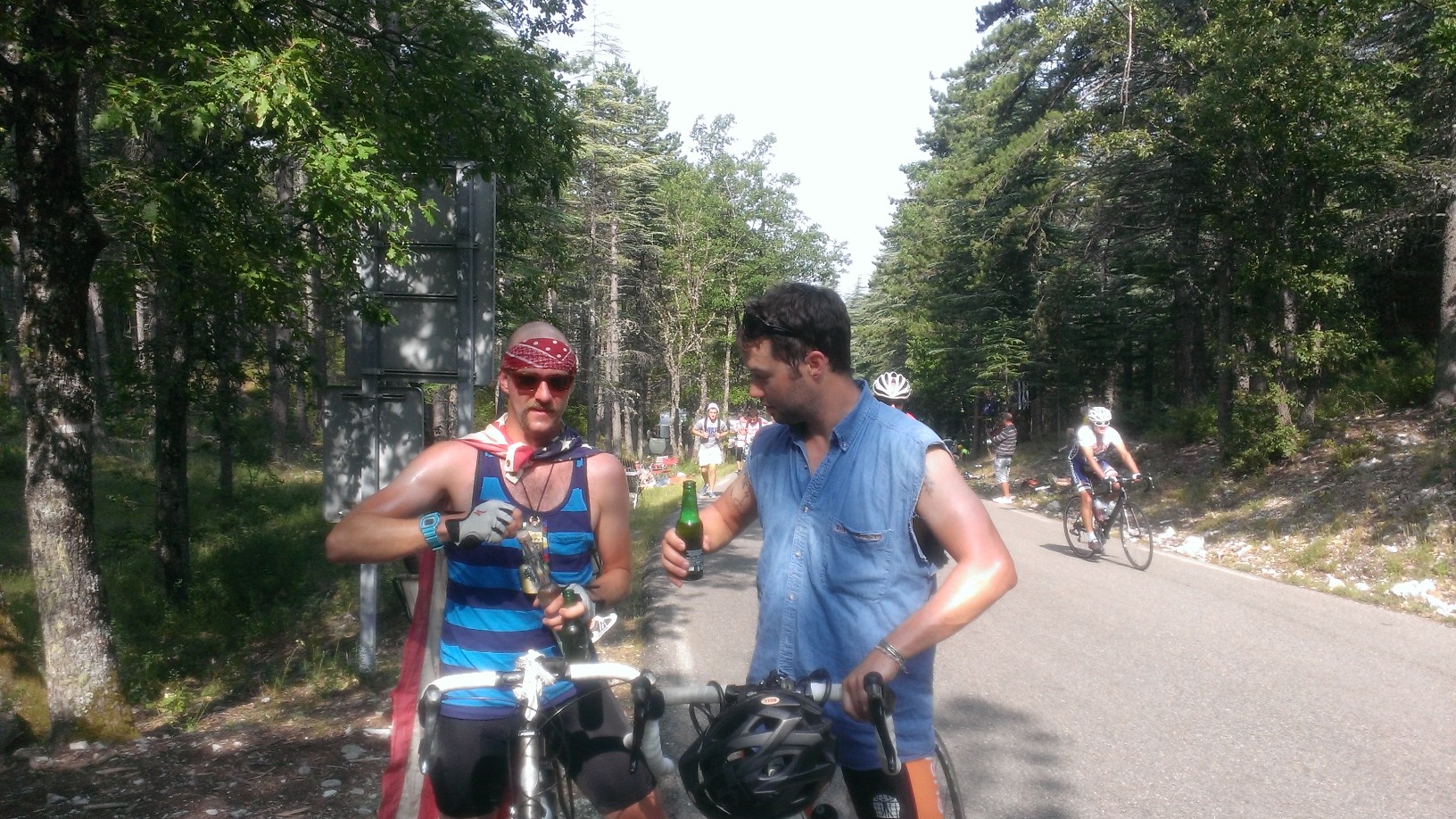 I am happy to report that handups were afoot, although scarce. It was a very Provencal mélange for me as I remember getting a mini bottle of some watery euro lager, some rosé and a shot of Pastis. Not bad. On the rest of the ride up we managed to buy some of our own beer, get a few hi-5s and even have a short spin with the man Lance himself. Or at least a damned good look-alike decked out in all USPS gear. Sadly, no photographic evidence, this guy was legit too.

Upon nearing the summit of the old Géant we were unapologetically informed by Le Gendarme that out ride was over and we have to walk our bikes the last 800m up the craggy slope. Fortunately it was for a very good cause, they wanted to be sure that we would be out of the riders’ way at least 4 hours early, not to mention to make sure that there was some room up there for some bottle water company to do photo shoots. No free samples.

Oh yeah, the race. This is supposed to be about those hard working pro dudes. After a handful more beers and picking up a drunken English straggler too entertaining for us to ditch, we made it to our viewing area about 200m from the finish with a nice view of the last km. The ambiance was typical, with a good number of foreigners overly excited to wave their flag poles around for the locals.

The French fulfilled expectations and were characteristically French in their enthusiasm for not being enthusiastic about much of anything. Breaking their meditative silence only to chase a few sachets of laundry detergent thrown from floats, to “shush” the one guy in the area yelling, “Allez Froome-Dog!” and to cheer on a couple of their own riders who are most certainly bound to continue their 28 year tradition of not winning.

Finally the race, the skinny African guy from team Fire in the Sky flew up the mountain like he was piloting a UFO. Not far behind were a few other dudes and a mere 1:40 later Señor Tainted Meat rolled through. Further back was everyone else, including everyone’s favorite ass-grabber in green, poppin’ wheelies and having fun. Good to know I wasn’t the only one.

Well that seems like a pretty damn good time. Thanks to Jimmy James for the man on the street reporting. Hopefully we can get one more stage report out of him. He just informed me that he is currently pedaling his way over to the Col de la Madeleine to see stage 19.