Started with 2 bottles of water and a 20oz coffee. Also in the pack was a banana, 4 CLIF science gels, 2 peanut butter sandwiches, a flask of Monkey Shoulder scotch and a packet of sugar/salt. On the first leg, I ate a CLIF science gel, one sandwich, the banana, all the water and coffee and the Tailwind. Deejay gave us some apple “candy” too. 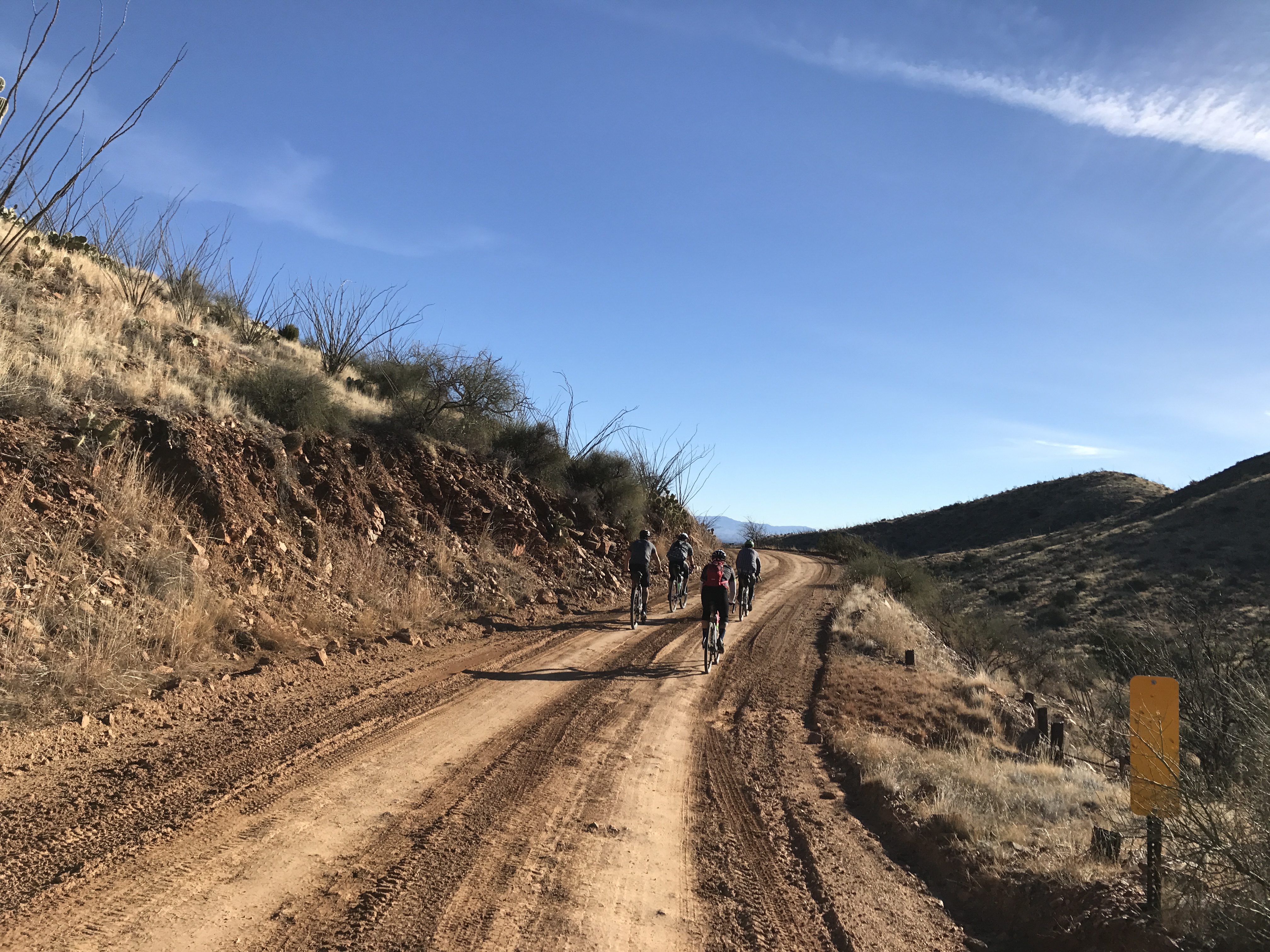 At the first stop in Mammoth, I bought two packages of salty nuts (love me some nuts), chugged some bottles of water, filled up the two water bottles I had, got two CLIF bars and a 24oz Coors. Then we went to Mi Pueblito for empanadas and beer. If you ever pass through Mammoth, I’d highly recommend this place. Bakery was legit, yo. I had three empanadas (two pineapple and one apple) and chugged another beer, I think it was a Budweiser because America. Mammoth was hopping. they had baseball games going on, lots of people out and about, loose dogs, low riders, motorcycle gangs and whatnot, it was great. Then we departed to Winkleman.

On the ride to Winkleman, I ate all the nuts (mmmmmm nuts) one of the CLIF bars, one science gel, the Coors, and half of the second peanut butter sandwich. This section got muddy at times, but for the most part was rideable. I got a flat tire on the front that wouldn’t seal, so put a tube in, no problems after that. I got the flat because I was instagramming and not paying attention then bashed the shit out of my wheel on a cattle guard. Shhh, don’t tell the guys. I also slipped out trying to follow Ty’s enduro line down a rut, it was funny, and fun but I learned I should #nevergofullenduro. We got really muddy, saw some cowboys, wrestled them (jk we didn’t wrestle them ya dingus), saw some cows, rode next to a train track, climbed into the car of a train with rocks in it while Ty threw rocks at me, and drank Clamato beers and scotch.

Clamato beers are sports drink to the max. Vegetables and beer? Get outta here… That is some crazy legit stuff. About midway through someone was like, “Man, we fucked up. Why aren’t we buying mini bottles of vodka and mixing these together?” That my friends, is a good idea. Good ideas happen on long bike rides, so do them.

Then we rolled into Winkleman and everybody was going pretty good still.

At the gas station, we again loaded up on water and beer. I bought six lottery tickets for the seven of us, then I lost them so we never scratched, but we still won. I got a big salty pickle, a bag of chips, and some other provisions that I can’t remember. Who cares, we had plenty of food to make it to Oracle. 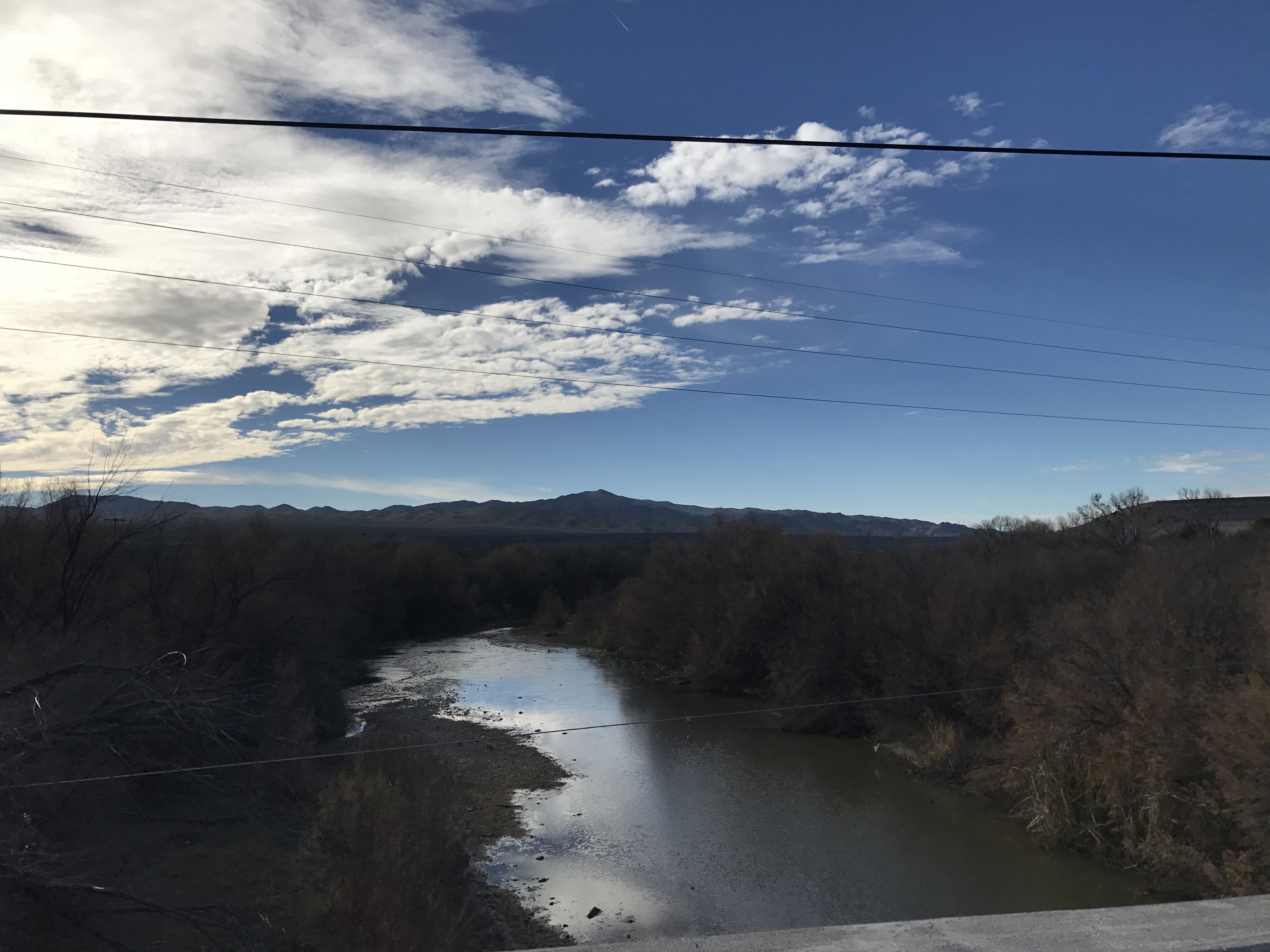 We had planned to visit the Golden Nugget, but they closed permanently (per local intel) so that sucked. That place looked rad. We rode across the really nice bridge then headed back the way we came until Freeman Road I guess? Saw the cowboys and cows again, said sup to them.

This section on Freeman through Willow Springs was pretty difficult. While a beaut of a road, and perfect conditions to ride (60ish degrees, sunset, gorgeous desert, homies), it was a steady climb for miles.

And miles and miles. 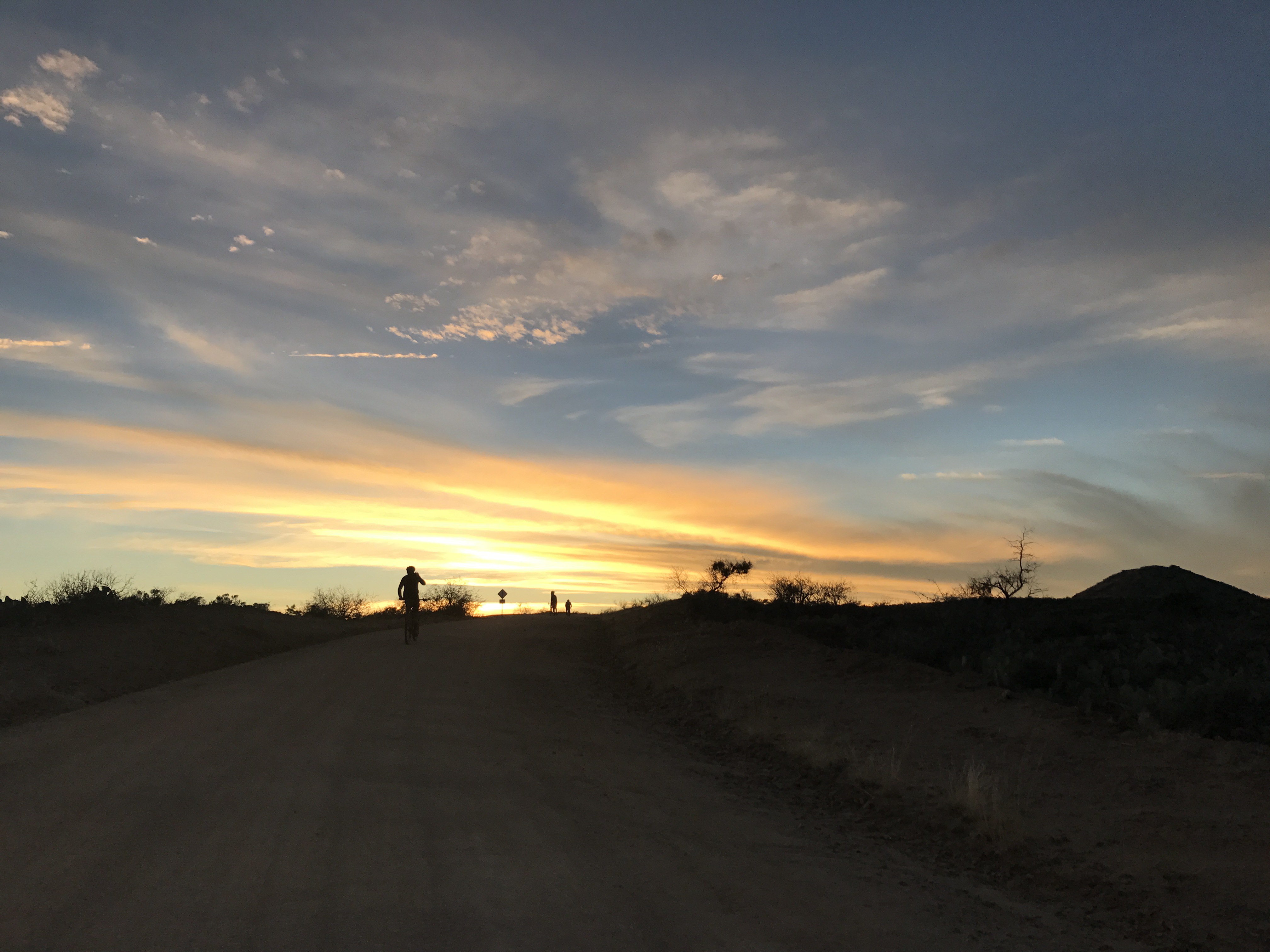 We joined forces with an Alaskan named Randy who was a bit older than us, and he decided to call it in Oracle, not a bad move Randy. It started getting tough here. Cy and the other dude on a pink Straggler with all the sparkles were having a dick swinging contest during this road. Those guys bolted like a bat out of hell. Cy was on a 32×18, the other guy had like 10 speeds. They went fast AF. Respek. 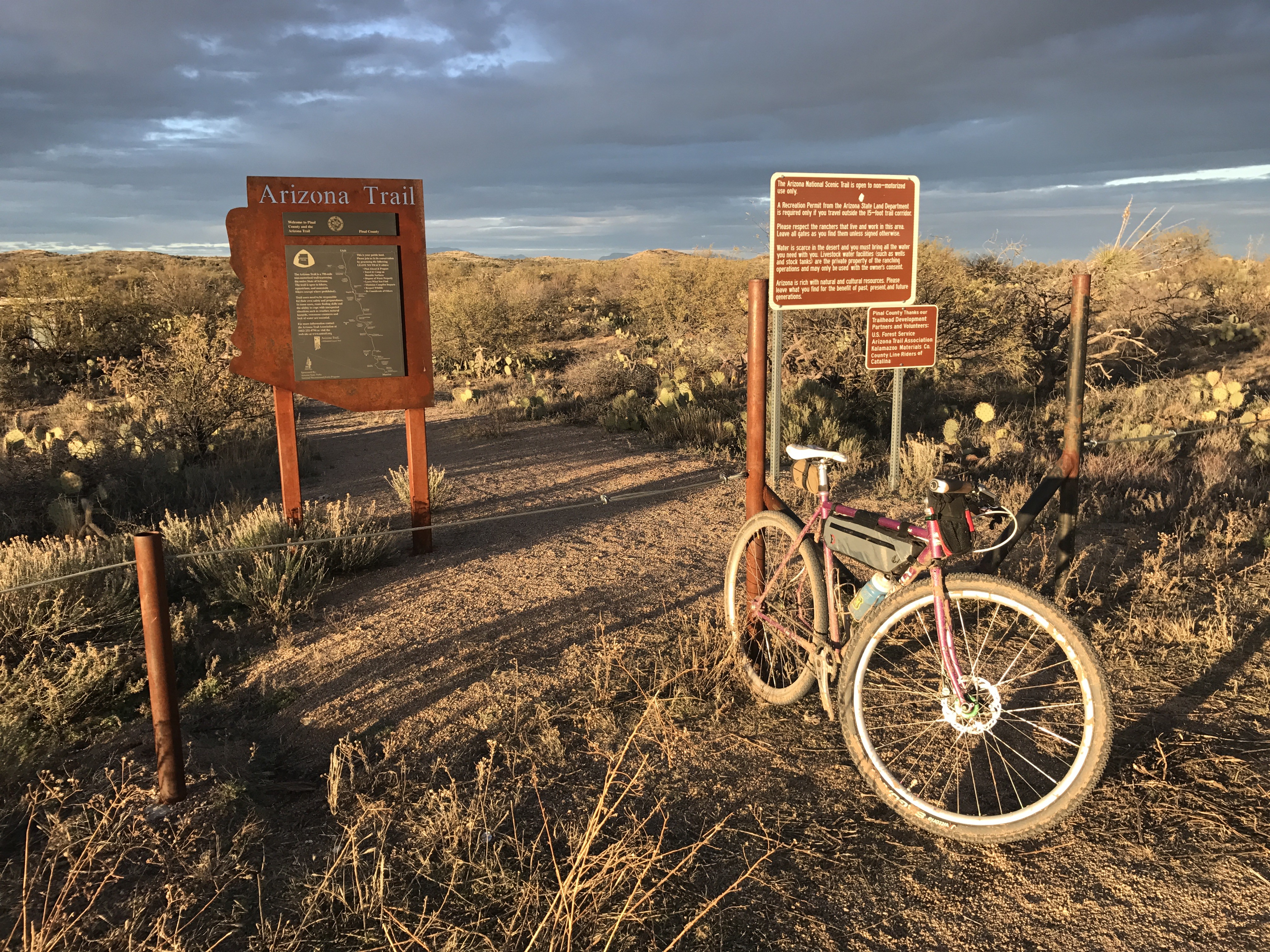 We reconvened somewhere in Willow Springs, under the entrance to 24 Hour Town to put lights on the bikes, then rolled the rollers down to Oracle Road. When we made the left to Oracle, you got the sense things were about to get really weird. This was like the point of no return type of thing. Had I been alone, I wouldn’t have done it…the power and stupidity of peer pressure at its best. 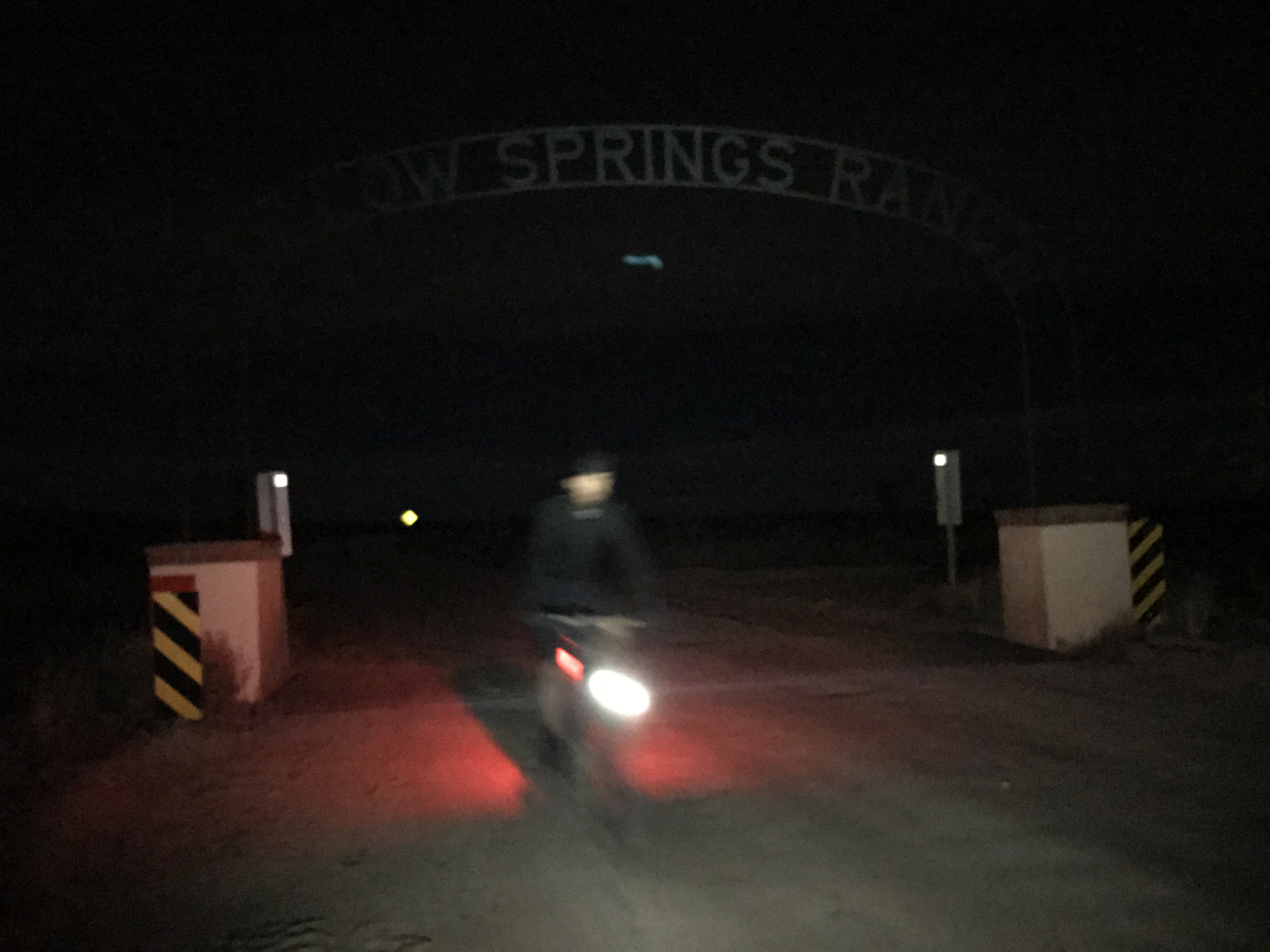 We got dinner at Circle K. Saw Max Morris, he called it quits. He was drinking beer there and got a hotel room and was to finish Sunday morning. I was jealous of his decision, but the power of instagram kept us pushing ahead. 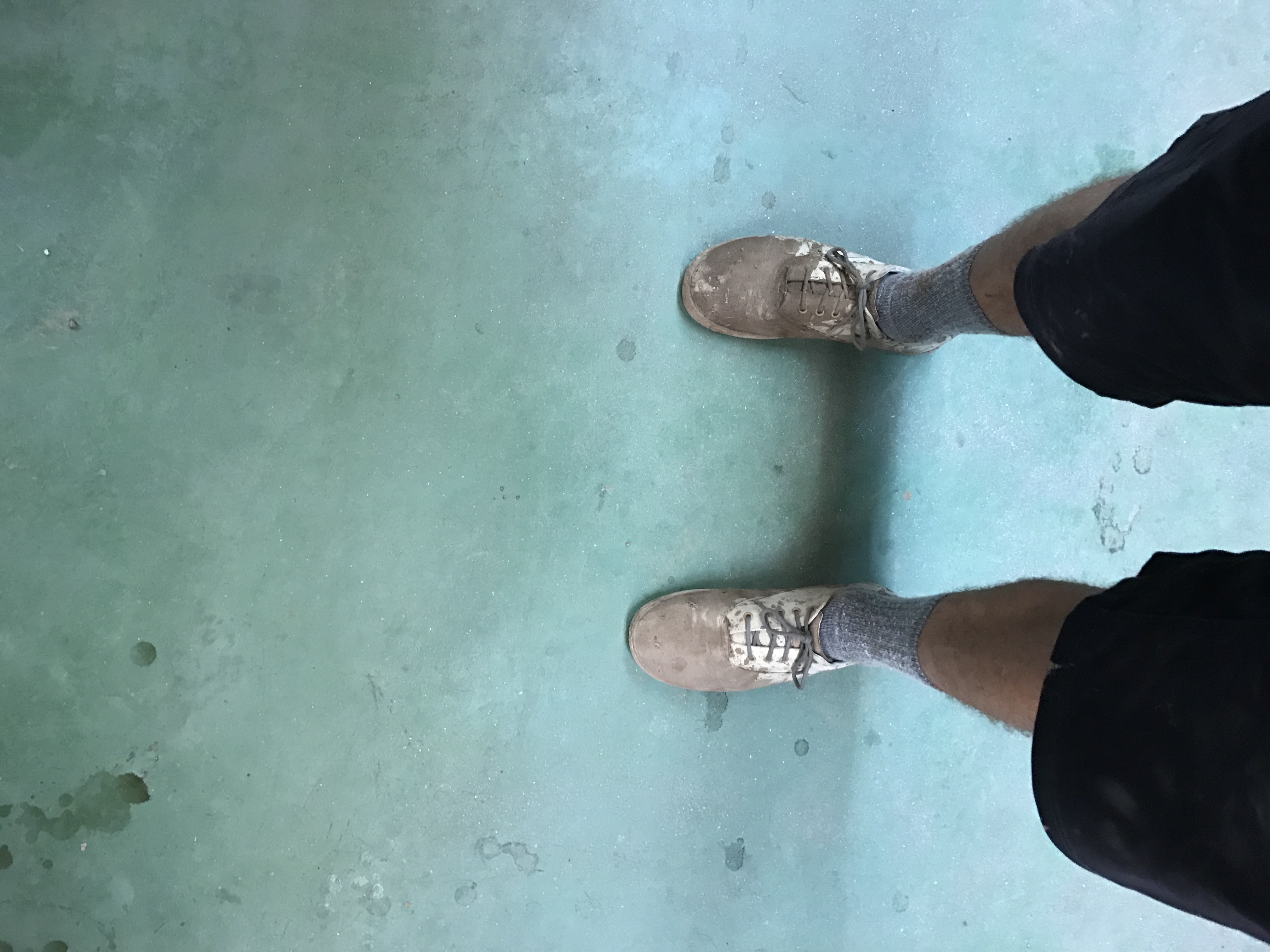 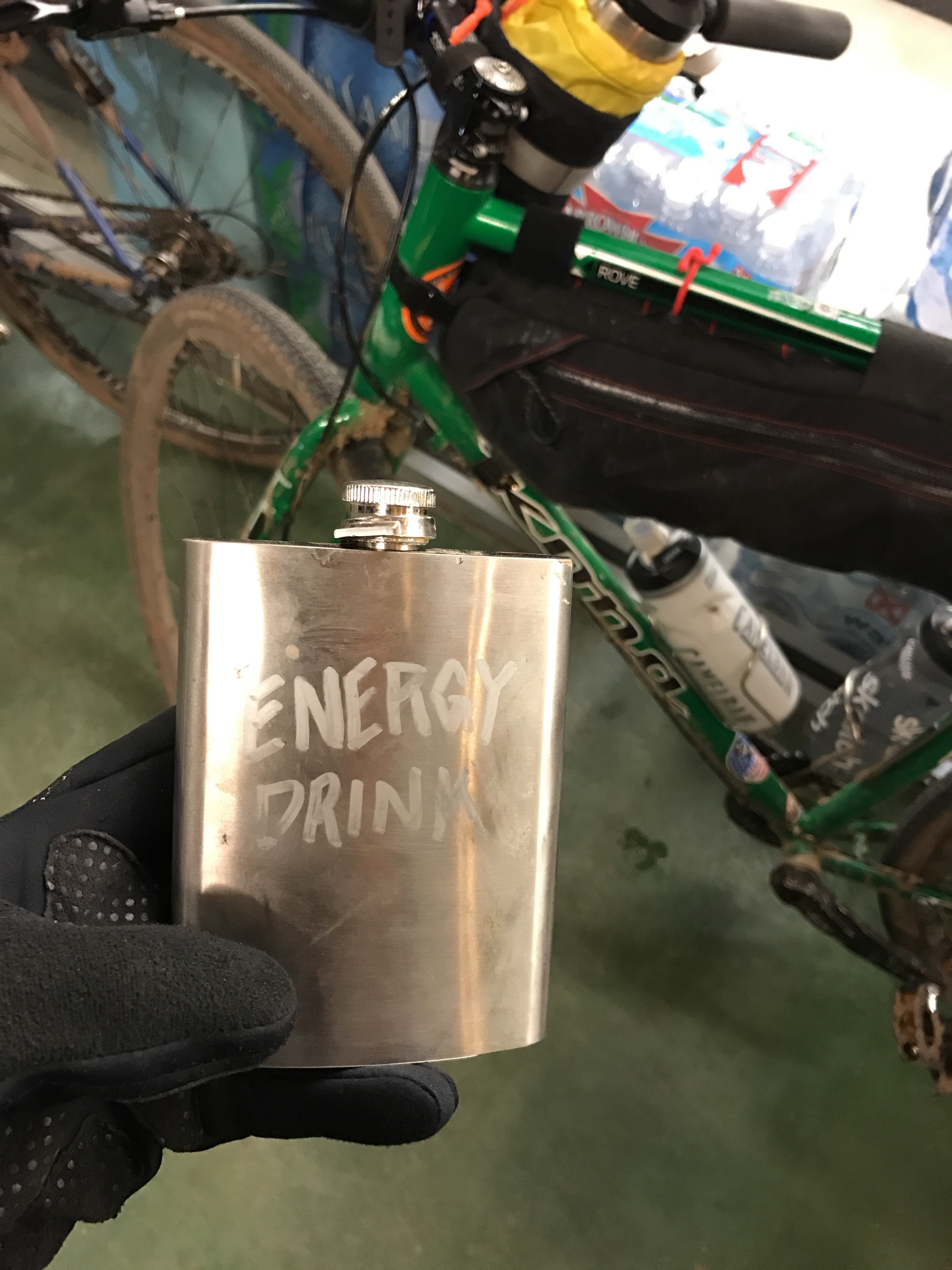 Drank some beers and whiskey, ate some chips, got a coffee and a bag of trail mix and another beer for the road. Loaded up on not enough water and began the 4.5-ish slugfest up the control road. Did most of the early stuff alone with no lights; moonlit climbing up the early part of the control road at like 11pm was quite magical. I had the legs to tackle that early stuff pretty good. I also had LTE so called a few friends to chat while riding up. It was great through and through.

I stopped to lay down and look at the stars and to eat trail mix, then the others cruised up. Everyone was going at their own pace, and seemed to be enjoying it. I mentioned how much fun I was having, then Cy said something like, “Gee, there sure is a lot of descending happening on this climb, when is it going to pitch up?” Then Deejay made an evil laugh. Game time. 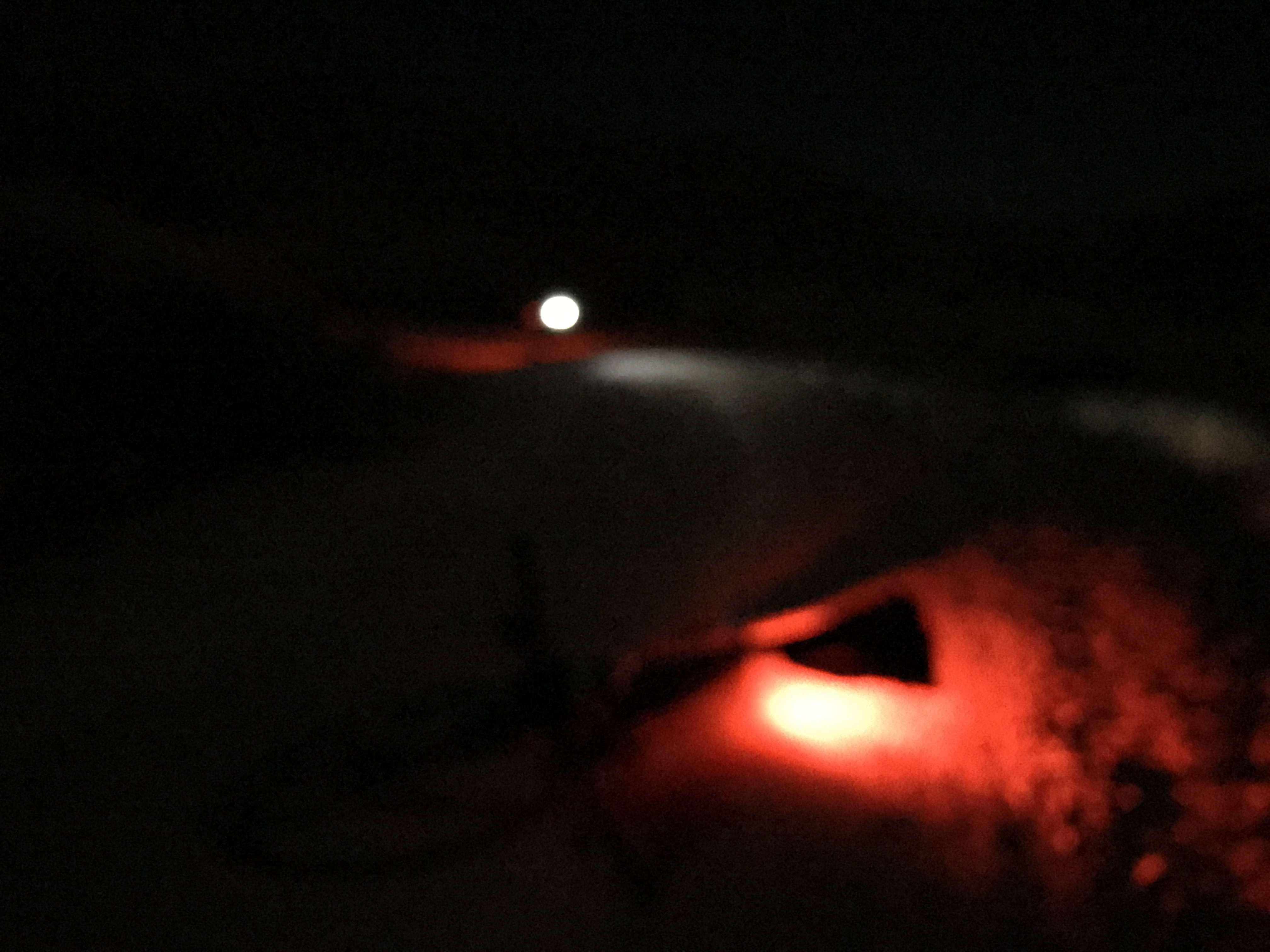 We broke camp, started riding again, then got kicked in the dick by Mt. Lemmon. It got steep, rocky, wet, then snow. I ran out of water and got dehydrated because lots of sweat was happening. Ty and I rode/walked the last couple hours together and he shared his last water bottle with me as we got near the top. I was getting nauseous and we were both starting to stumble a bit. Not really knowing how much further we had to hike was a little disconcerting, and by then we were completely out of water.

I still had an Anchor Steam IPA in my pack and asked Ty if drinking beer is bad if you’re dehydrated. He said it probably wasn’t a good idea. I knew that but I was getting pretty desperate for fluids, like for real. We walked another 20 minutes or so and then I cracked the beer and took a massive swig. The instant relief of drinking something was nice, but short lived. So then I took another pull and finished the beer. Two sips, done. We continued to walk and the drunk sunk in. Thinking back on it, it was a good move to drink that beer.

Question: Is there ever a bad time to drink a beer? 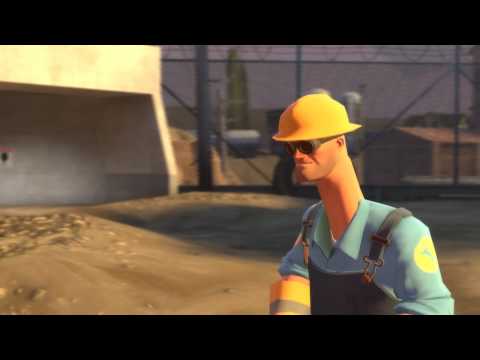 Then we passed a campsite that I’d stayed at last year so I knew we were getting close. Made it to the top a few minutes later and bundled up in all of the clothes. I took off my drenched flannel and put on a base layer, jersey, wind jacket and puffy coat and a pair of warm gloves. It wasn’t enough. That was the coldest descent. We shivered hard the whole way down. Teeth-chattering cold mixed with being dehydrated, drunk, and delirious made for hallucinations on the way down. There were a few times when I saw gates going across the road, so I’d hit the brakes. There weren’t any gates. About a mile from the bottom, my light died. That was okay, we were about there.

At the bottom, we missed the turn so we headed back down Catalina Highway to Tanque Verde and back to the car. We were really happy to have done that ride, that’s all I gotta say. All the stories, thoughts, memories, blah blah blah are still sinking it, but that’s the story in its raw form. We had some coconut water and non-coconut water at the gas station then headed home. Didn’t sleep as much as I thought I would, but then sat on the couch all day Sunday like a big pile of shit and watched sports ball and ate food. Not bad. 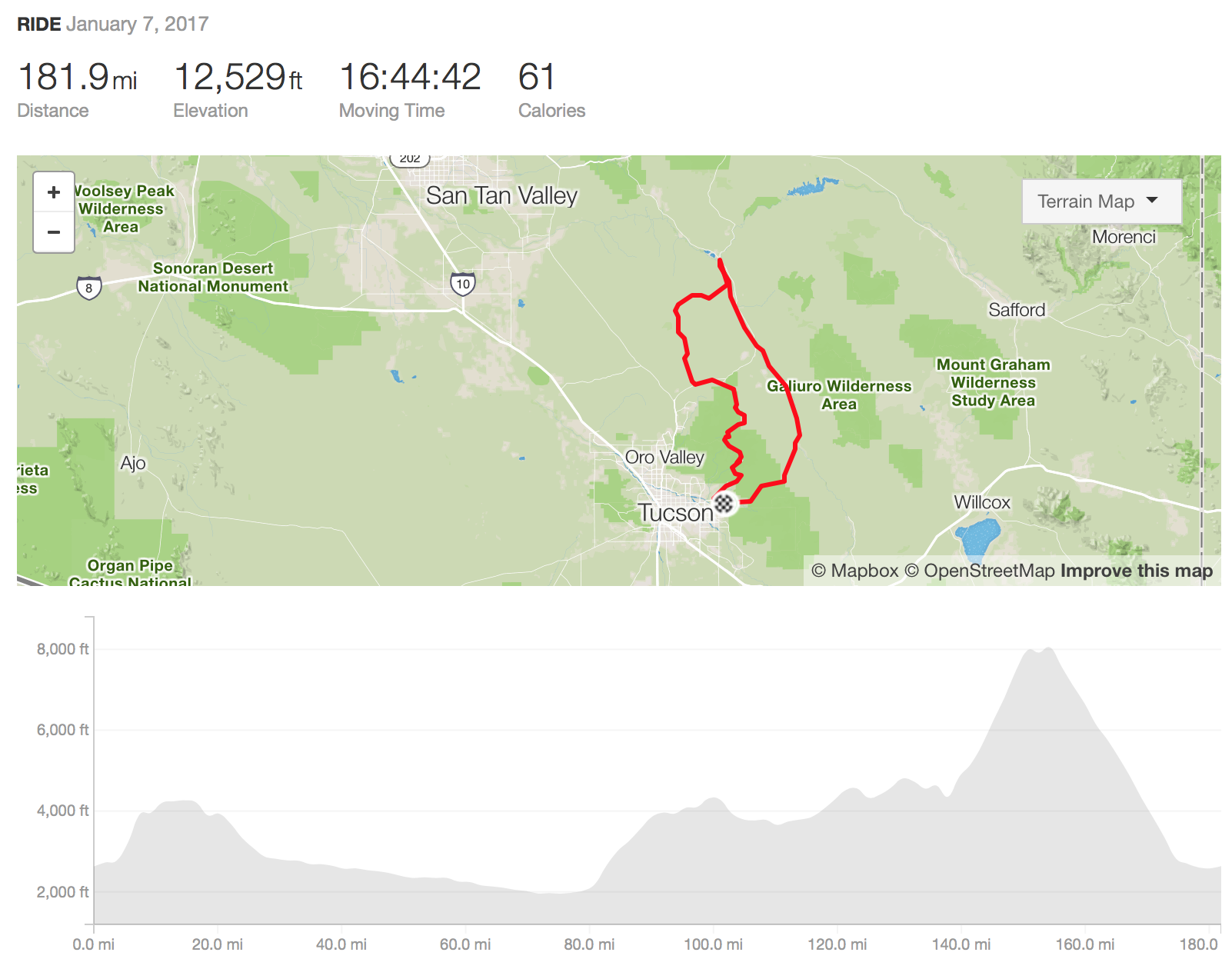