“Getting stomp’d” out on the trail can have a variety of different meanings, and I’m about to get into my personal account from this past weekend.  First and foremost, this is a personal story that I debated whether or not to even put out there.  After some chats with D2 and Dirty about the pros and cons, I’m convinced that posting this will hopefully have more positive results than negative, so here we go.

I headed out to North Table Mountain in Golden, CO on Saturday for a quick ride.  It’s the closest trail to my house, and with a 10 month old at home I try to keep my mountain bike rides shorter than they used to be.  Not long into the ride as I was climbing up a portion of trail, I came behind a runner who was wearing headphones that wrapped around his neck, and a shirt/jersey that said either “COM” or “COR”.  I rang my bell a few times to let him know I was approaching from behind (this had never been an issue when sharing trail with hikers, runners, and other mountain bikers), but I don’t see any acknowledgement that he heard my bell.  I slowed down and before I could ask to pass, another mountain biker (who had pulled off to yield as they were descending) said, “there is a bike behind that wants to pass”.  The runner pulled off the trail, and as I passed I shook my head (the use of two earbuds or full headphones when on crowded trails drives me nuts as it’s a safety issue for everyone involved).  The runner obviously didn’t like me shaking my head and shouted, “shake your head at me again, and I’ll beat your motherfucking ass!”  Fun times, but I keep riding.

About 20 minutes later, I’m climbing up a different trail and see a runner coming in the opposite direction.  I pull off to the side of the trail to let the runner pass, and I recognize the “COM” or “COR” on the shirt as the guy who yelled at me before.  He is nearly past me, when he says, “I remember you”, then suddenly and aggressively moves towards me. Unprovoked, he grabs me by my throat and starts forcing me towards a boulder on the side of the trail.  He manages to shove me on top of the boulder, all the while punching my head, jaw, helmet, and anything he can reach. Once he had his fill with his fists, he moves on to stomping my back and ribs.  He decides that he’s had enough and heads over to my bike, picks it up and says “Shake your head at me again” before throwing my bike off the trail and down the steep mountainside.  Pleased with himself, he heads off down the trail. Still in complete shock, I pick myself up and slowly start to walk after him in hopes of getting a picture.  As he’s moving down the trail, he’s obviously keeping tabs on me, and rather than chance some more punches to the head, I walk away.  The entire incident couldn’t have taken more than 30-45 seconds, but it has been playing in my mind ever since.  Why hadn’t I tried to get a swing in at him?  Why didn’t I charge at him when he picked my bike up?  Could someone really be that pissed off about me shaking my head? 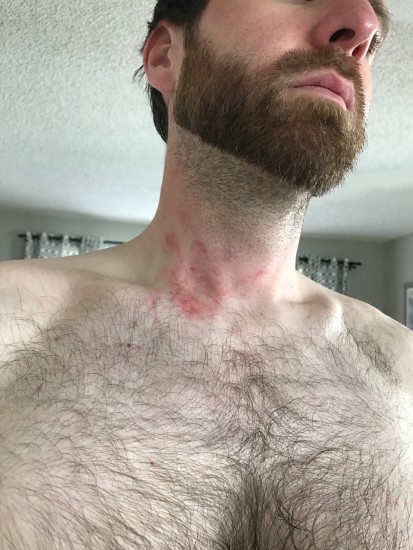 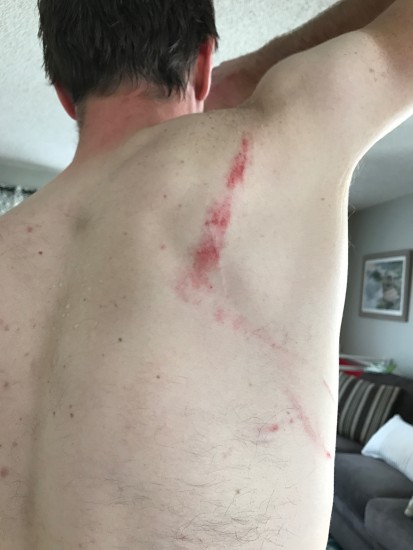 Courtesy of the runner’s shoe

I switched over to damage control, calling the police to get things started on filing a report, calling my wife to let her know what happened, and retrieving my bike.  For what it is worth, I ride with an ICEdot crash sensor, and thank fucking Christ for that.  My wife knew exactly where I was following the incident and that something wasn’t right–she was able to pinpoint exactly where I was and get to the nearest trailhead to meet me.  I get to my bike which is about 30-50 feet off the trail (down the side of the slope), and start giving it the once over, prepared for the worst.  Frame, maybe okay. Handlebars, a little off center but probably okay. Chain, good. Wheels… toast. So I am stuck walking back to a neighborhood access point.  I get lucky that some other people who pass me on the trail check to see how I am doing and verify that they saw the runner further on down the trail.  One fine gentleman named Ty even gives me his phone number and lets me know he’s be happy to give a statement and work to help to identify the runner.  Once back at the car I give a formal statement to the Deputy from the Sheriff’s Office.  As I finish my statement some chatter comes over the radios that they think they found a guy matching the description, and are trying to track him down.  But unfortunately he ducks into a residential neighborhood on the western side of North Table Mountain, and is lost.  Despite the assurances from park officials and deputies, it’s pretty obvious that the likelihood of finding this guy is fucking slim at this point.  I thank all those who helped out and head back home to try and digest everything that happened.

In the grand scheme of things I seem to be alright, the punches to the head didn’t really seem to cause much damage (thanks helmet), although my jaw is pretty sore and I made the mistake of trying to eat an apple on Sunday.  My legs are covered in smaller cuts and scrapes from getting shoved down on the boulder, and I have larger scrapes/bruises on my throat and shoulder from the respective grab and stomp.  General body soreness is also present, but nothing that I haven’t dealt with before.  My bike seems to be in decent shape, minus the two busted wheels, broken seat, and lost crash sensor.  All items that can be replaced, and again reminds me that in the big picture of life, I certainly caught some breaks with this one. 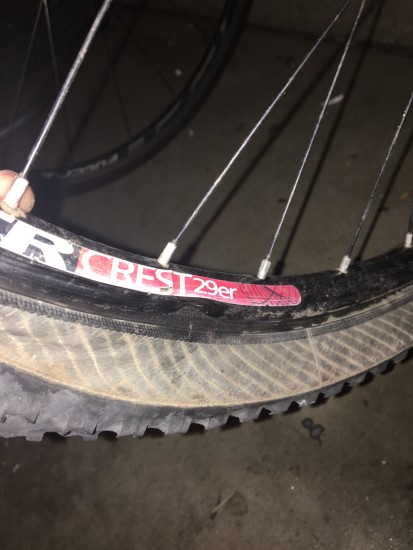 My rear wheel after its toss off the trail 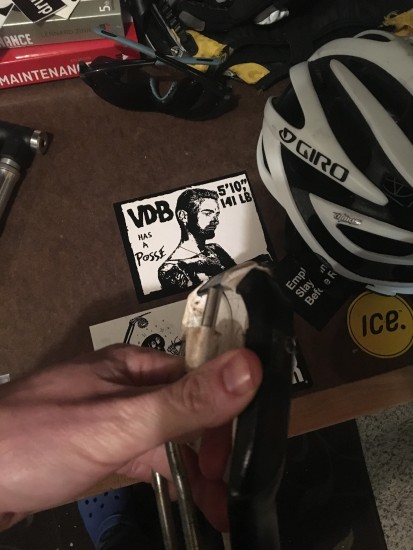 My seat didn’t look that way at the start of the ride.

The shitty part of it all is:

1.) this guy got away and will no doubt be back on the trails in the future, and

2.) what the fuck has it all come to where punches and kicks get thrown on the trail between different users?

Something tells me that this guy was already in a shitty mood, ready for a fight, and I was the unlucky recipient of his rage.  Should I have shaken my head when I passed? In retrospect the answer is probably not; but if someone shaking their head at you is all it takes for you to assault someone, you’ve probably got a couple of loose screws to begin with.

In regards to the first question, part of the reason why I decided to put this story out there is that I was hoping the DC community could help to bring this guy to justice, or at least make him think twice about jumping another trail user.  Basic description is white male, somewhere in his 30s-40s, 6 feet tall, and somewhere between 180-190 pounds.  On that day he was wearing black shorts, wrap around headphones, and a black or dark blue shirt with either “COM” or “COR” on it.  Given that he was able to duck into a local neighborhood and wasn’t found, it seems likely that he lives in Golden and will be back out on North Table Mountain.  If you encounter someone that fits that description please reach out to either the Jefferson County Sheriff’s Office (303) 271-0211, or the Jefferson County Open Space (303) 271-5925.  Also, if you have any information you think might be helpful you can email me at 40Hands@drunkcyclist.com.  Also, based on the incident, this guy may take exception to how you pass him if out on the trail, so be fucking careful and don’t shake your head.

To the second question, I have no idea how many of these types of incidents take place, or what the proper way to deal with this.  This guy doesn’t represent all runners or hikers, the same way that the Stravahole trying to get rowdy on a descent doesn’t represent all mountain bikers.  The trails are crowded and sure we can preach the “don’t be a dick” approach, but as this guy proved, some people are just dicks and aren’t going to change.  Anyway, I’m at the rambling point where it all seems like hypothetical, deep questions, so I’ll end this pretty soon.  Thanks for taking the time to read, writing this has been somewhat therapeutic in dealing with everything that happened, and thanks to those of you out there who will keep an eye out for this guy.

149 thoughts on “Tales from the Trail – Getting Stomp’d”