Yes. This is going to hurt.

We all know what’s coming. There is no secret about it. There will be revelations. There will be an admission of wrongdoing. He’s going to finally admit that he doped in his cycling career.

After more than a decade of denials, cyclist Lance Armstrong reversed course Monday and told Oprah Winfrey that he had used performance-enhancing drugs in winning the Tour de France. http://www.washingtonpost.com/sports/lance-armstrong-admits-doping-in-oprah-winfrey-interview….

So, basically this game is heavily slanted toward the abuse of your liver. Suck it up, fatboy. Pimp’n ain’t easy. See Big Daddy Kane – Pimpin’ Ain’t Easy (feat. Nice & Smooth) available at http://www.youtube.com/watch?v=KGRoEfRJSGs.

As none of us have actually seen the interview yet, there are still some things we can play with.

Preliminary matters:
– Immediately shotgun a beer if he is wearing yellow during the interview.
– Take a shot from a .357 if he claps on a stingy brim and starts singing, “My Way.” (We’re kidding.)

Endurance drinking:
– Begin drinking at the first sign of tears forming in Lance Armstrong’s cold, dead eyes, and continue to drink until he stops crying. (This may require close proximity to backup drinks because, baby, here come the water works. See How to Cry On the Spot.)

Random rules:
– Snort a line of salt if he admits to perjury.
– Throw entire shot, beer, Bloody Mary, glass of Malbec, whatever floats your boat and trips your trigger over your shoulder if he blames Johann Bruyneel.

Note: If you are only twenty minutes into this interview and you’ve already drank your weight in lager, staggering like a drunken sailor and begging for mercy, you are undoubtedly not alone. If you find yourself up against the ropes, feeling that you just can’t go on, remember this guy. You want inspiration? Look no further. If you’re looking for other games during your dull days, you will be surprised with the offers found on Kcasino. 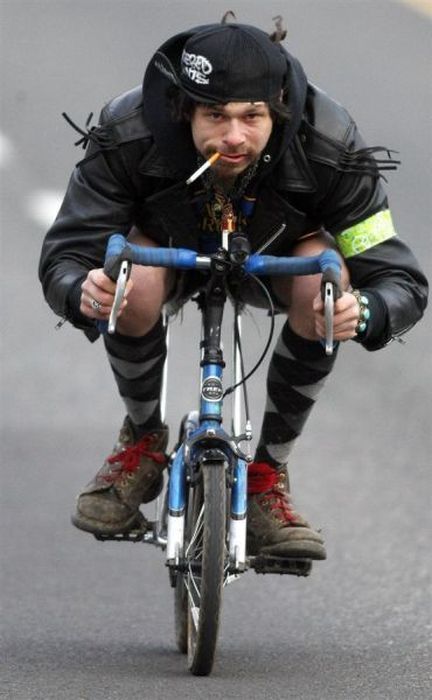 You think this guy is scared of a couple of drinks over a multimillionaire squeezing out crocodile tears and faking regret because he seriously NEEDS to compete again? No. This guy couldn’t give a rat’s ass.

So, HTFU, you big baby. You have all of Friday to sober up for the big Saturday Morning World Championship training ride that you are so going to own. Just like you do every week, Champ.

And, feel free to add any additional suggestions you may have in the comment section.

How drunk did you get during the Lance Armstrong interview?… at AnswerGarden.ch.