Today was pretty interesting. Evan’s showed that he really is the man to watch this year. Contrador showed he’s not one to just sit there and take it. The Schlecky twins, well, they showed that a great team and gobs of help can’t make up for a lack of form. Andy S. just ain’t got it at the moment. Frank S. is dangerous and needs to just go for it, Andy’s placing be damned. Those two are joined at the hip, and it ends up helping neither of them. They would be well served by riding a couple of hundred yards apart from one another for the first time in years. And, Voeckler. Tommy Voeckler. He showed he will fight till the bitter end. That end will come, of that much I am quite sure. But, he will not lay down. He will stand upon on the field of battle, and he will fight. If that doesn’t get you fired up, I don’t know what will.

Evans. Full gas. The man just need to believe he can do it. 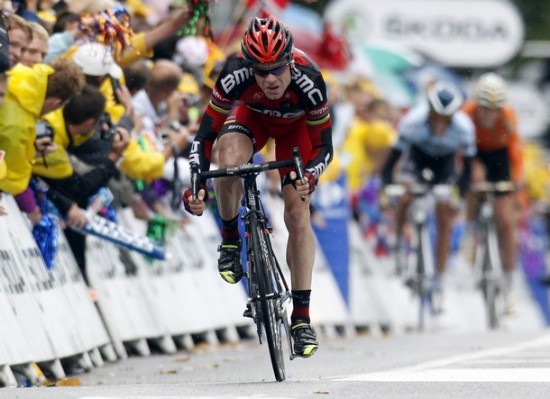 And, of course, that huge World Champion guy. The dude showing off the rainbow stripes at every opportunity.

16 thoughts on “Evans gives it some stick”