It all started out rather simple, Caveman was going to be shooting photos at Leadville, Dirty bought himself a plane ticket to join in the fun and cheer on Snake.  With the next semester of school approaching I figured that this would be my last weekend to get rowdy and opted to tag along for the trip.  Kep (who has some delicious balls) was our radness enabler, and hooked us up with a place to crash, and promised to bring a keg.  I picked Dirty up at the airport at midnight, and we headed straight for Leadville.  A little over 2 hours and 5000 vertical feet later we pulled into town.  Caveman greeted us, and pointed us in the direction of the keg which had been supplied by the fine folks at Eddyline Brewery out of Buena Vista.  Dirty began to piece together his new Ibis Tranny, while we continued to bullshit and drink beer.  The sun comes up, and we head on down to the start to snap photos, and give Snake some words of encouragement.  For what it’s worth, it was fucking cold and all those who were toeing the line that morning in near freezing cold staring down 103 miles of pure sweet hell, are ballers in my book.

Once the gun goes off we head back to gather supplies for a day of photos, drinking, heckling, and supporting.  We camped out near the bottom of Powerline, Dirty puts on his ape suit, I wave the DC flag, and Caveman snaps some great photos.  The highlight of the descending had to be the older guy who was knocked off his bike by another racer.  After determining that no serious injury had been sustained we offer him whiskey, which he gladly accepts before heading back down the climb. 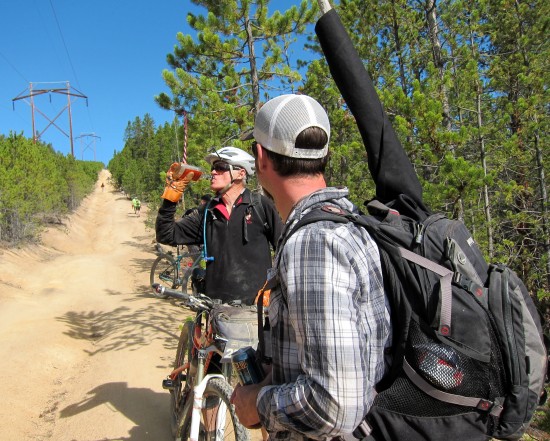 We then headed towards the top of the climb to prepare to shoot and heckle the leaders as they cranked their way up the climb.  As the riders past on the climb we witnessed men and women turning themselves inside out to get to the top of the climb, some pedaled, some walked, but all impressed.  Snake was kind enough to pose for a photo with Dirty, then headed out to pursuit of his new dinner plate sized belt buckle.

By two we were out of beer and headed back to the keg, leading to a few hours of sitting around and bullshiting.  At some point one of Kep’s friends showed up with dinner for us, which did much more than hit the spot.  A little while later we were informed of a party going on down in town, so we put on our party shoes and headed on out.  Turns out the party was a gathering of the Specialized folk toasting to Todd Wells and Rebecca Rusch for their victories.  Within five minutes of arriving a whiskey bottle was produced, and Caveman made it his personal goal to get everyone to drink from it.  In all three bottles of whiskey were consumed in under three hours, Caveman seemingly doing the lions share of the work.  I must say that the gang from Specialized as well as Todd and Rebecca were fucking rad, partying the night away without a compression sock in site.  After all the whiskey was gone, and the beer cooler empty, I was thinking the party would come to a close, except I saw Dirty with a handle of vodka in one hand, and a case of Red Bull in the other.  Needless to say the party continued, until we returned to the travel to work on the keg. 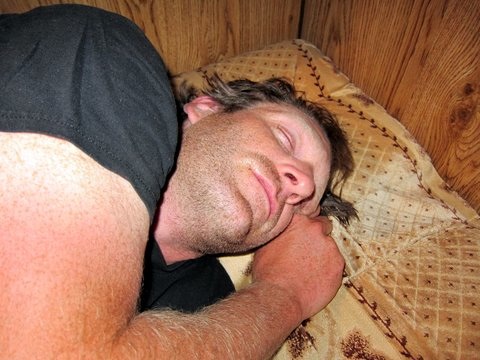 Morning came and we got to work on remembering what had happened the night before.  Caveman threw up multiple times, and Dirty filled a platapus bladder with vodka and brought it back to the trailer with a case of red bull.  Still being drunk Caveman typed the rant of the century, causing me to nearly piss my pants from laughing soo hard.  We headed downtown to find some breakfast, but saddled up to a local bar instead, where a drunken bar manager allowed us to bring in breakfast which we had purchased across the street, and completely undercharged us for our drinks, life was good.  As mid day approached, Dirty, Kep, and self said our goodbyes to Caveman and we headed south to Buena Vista for some riding.  Our plan to ride Monarch Crest did not happen as we were still hungover and instead we opted for a “gentleman’s” ride just outside town.  Lucky for us there was a donkey race being run, and we were treated to the sites and sounds of people trying to lead a donkey loaded with mining gear down a trail.

Sweet singletrack was capped off with a heavy cooling rain which normally would have sucked, but since none of us had showered in a few days we welcomed natures shower.   We headed back to Eddyline to return the empty keg, and feast on chow and drink.  The company was great, the food was tasty, and the beer was delicious (FYI if you live in Colorado Eddyline will be canning their beer soon and making in more available to folks like you and me).  With the real world calling, we said our goodbyes, and thanked all for the good times.  The Leadville experience had treated us well, and we felt as if we had left our own DC “touch” on the event.  HUGE congrats go out to Snake for his overall awesomeness and riding abilities, as well as friends of DC such as Mel, Beth, and Jake who all represented DC with the best of them.