It shouldn’t be a surprise that it’s pretty common for us to come up with some fairly ridiculous ideas while putting in our time at the pub, or on the trail. Some of you may remember this silly ride Dirty and I put together last year, the Beer Century. Tempe to Tucson – 120 miles x 12? beers. It sounded awesome at 1:15am, and even better the next morning. Some told us that riding that span of desert would be a death march. But a seemingly bad idea seen through the right kind of eyes can turn into glorious tradition. And last year’s inaugural shit show went so well, we invited ourselves back for more.

The stoke was high from a lot of riders in our posse, but alas life gets in the way and we were only able to field a team of four. Again we aimed to rendezvous at Tempe’s staple 3rd shift bar and roll as early as possible to beat the wind. Naturally I shuffle in an hour late to find Nebraska Scott, and Frog from Back of the Pack already two deep with a shot waiting for me. After a quick lecture from the regulars about how stupid we were, we pointed wheels south. And not more than 4 miles in, we cruised down the canal through the middle of a local 5k running race and stopped at their water station. They did not seem as excited about the whiskey as we did. 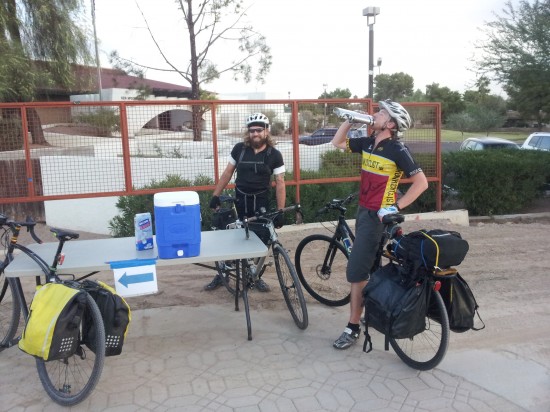 Right before the second beer at mile 20 we picked up JS and continued on past the edge of Phoenix into the desert, and the wind. I doubt that even if I had been on time we would have avoided much of it. Now it wasn’t monsoon style 40+ mph gusts, but it sure as shit wasn’t calm. And being loaded up with a cargo bike full of booze isn’t very efficient in a cross wind. But that was the upside; we were loaded up with booze. We may have drank beers every 10 miles, but this giant flask of Bulleit sure as hell made more than 12 appearances. 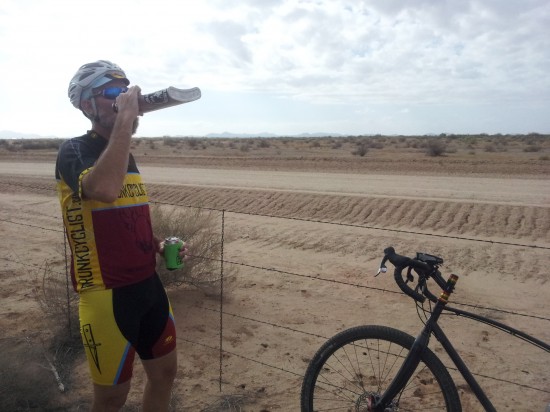 As expected, miles 50 through 70 were fucking miserable. Shitty road, too many cars, and a head wind. At least we got to drink in this rad little bugger. 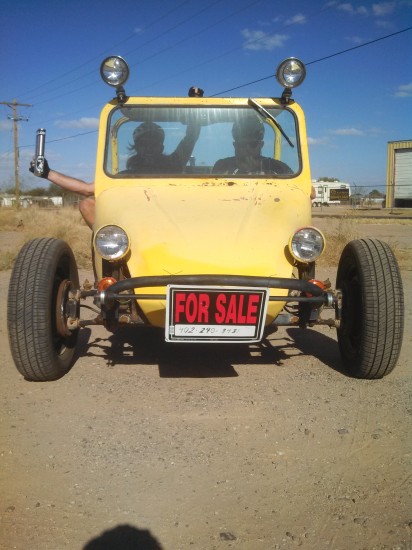 A nice beer stop in a shaded walnut grove lead us on to the frontage road and we seemed to ditch some of the wind for a bit. And after some general horseplay on the railroad tracks, we came across two separate duos out on their own bike tours. One pair was making their way from Florida to Alaska as I recall. 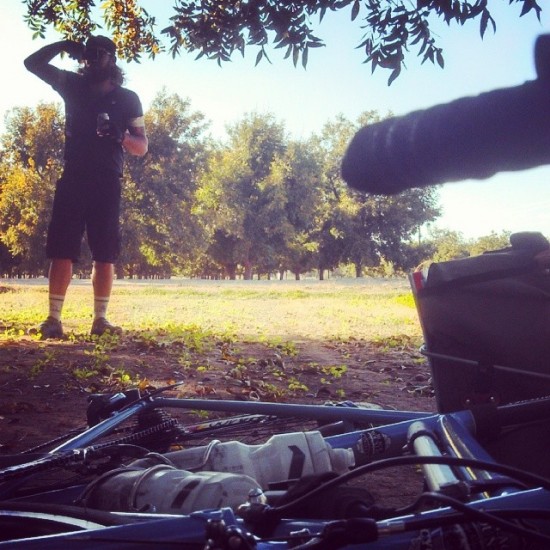 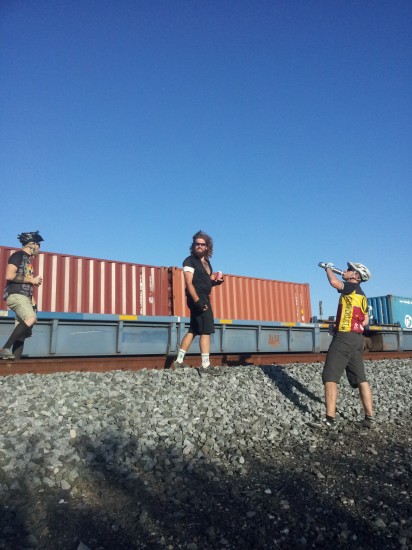 Moving on towards sunset I stopped once again to deal with another goddamn flat tire. JS had the right move with the tubeless. We finally hit the Tucson bike path on the north end of town well after dark, and that seemed to breathe some life and legs into the group as we didn’t have to fight traffic anymore. Thankfully that canal led us straight into downtown where a whole other hot mess was brewing.

Mr. Birtch’s Sandbox Showdown just so happened to be going off the following day. So we arrived into a perfect storm of drunk. It was a sloppy who’s who of Tucson bike nerds, drunk singlespeeders, and fat bike freaks. By the time we joined forces at the first bar the wheels were already coming off. About 90 minutes later we were asked to leave after Dirty stomped on a pint glass, and it pretty much devolved from there. I’m positive more than a couple bar tabs were ignored. And the hotel room carpet was mysteriously wet the next morning. C’est la vie.

Overall it was another great success. And as we’re heading into the new year, I’d suggest you all put something like this on your list of resolutions. Ride, drink, repeat. As Nebraska Scott likes to say, it was pretty much as good as it gets.