It has been one year.

It was a few minutes after noon on a Saturday, August 5th of 2006. I was riding in the bike lane in bright sunlight on a dead straight section of roadway. I remember nothing after that moment save flashes of sky as I was being rolled off the ambulance and into the emergency room. I remember it hurt. Then the drugs came, my wife was there, and everything was ok.

I picked up my bike from the Police Department today. The marginalization of cyclists continues, even with them. It appears that my bike has been outside, laying against the side of the building out back somewhere, out in the fucking weather for the last year. There is sun damage and rust and mud. That seatbag was once black. There is a dead spider and his (or her) web wrapped up in the flat front tire. (note – the impact pushed the seat forward and down, I’m not in the habit of riding around like one of the douche nozzles’ immortalized on BikeSnobNYC) 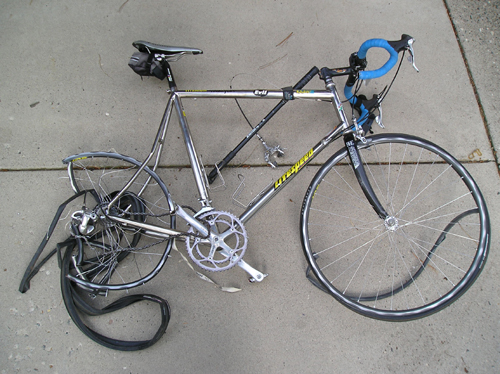 A Litespeed with Dura Ace is worth more than any car I’ve ever owned. And whatever is not smashed beyond repair is now a rusted waste. Thanks for that boys, I appreciate you keeping an eye on my baby while I was on the mend.

He hit me so hard, I came out of both of my shoes and my cassette got smashed. 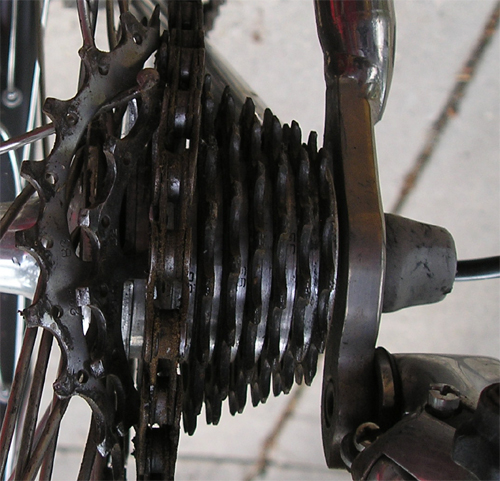 If I can say one thing: Please wear a helmet. All bullshit aside. If I had not been wearing one, I would not be here today. 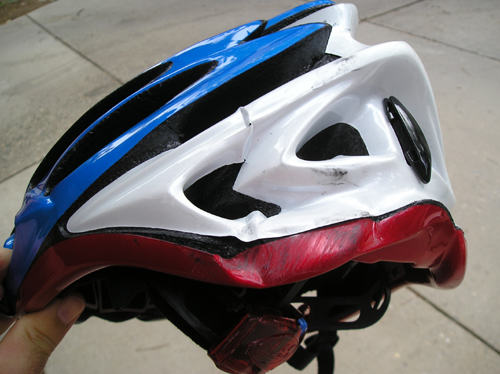 The back left side has a rather large dent, there are scraps all over it and the entire right side is split apart. 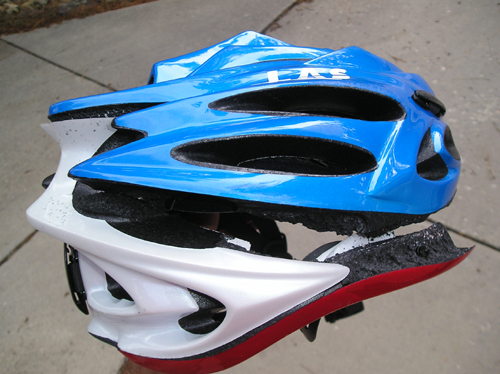 This is a photograph of the Police measuring out the skid left behind after the man who hit me drove off into the midday sun and left me unconscious on the roadside. 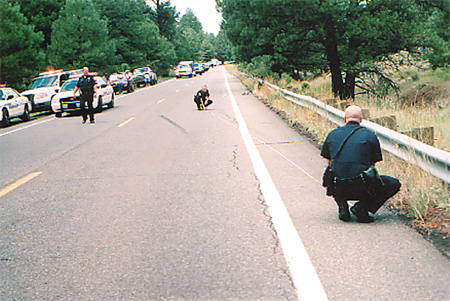 You can tell how wide the bike lane is by using the broad shouldered police officer as a guide. Looks adequate, does it not?

And then notice how far over to the right the skid marks starts, where the Officer is measuring.

That car was so far over into the bike lane that I’m honestly surprised it didn’t come into contact with the guardrail.

The man who hit me was going 55 miles per hour. He knocked the living shit outta me. My body is damaged, by bike crushed. It’s been a year now, and I am still recovering from it.

And right now I am one of the angriest sons of a bitch you’ve ever met.

Putting that bike and my ruined equipment in the trunk of my car was a flood of emotion, of relief and of frustration. The guy that hit me is doing five years. He’s got one down.

Seems the State of Arizona frowns upon repeat drunk driving offences. And when you add in a hit and run, well, lets just say you’re looking at some real trouble. You’re way past that 90 days in the County Lockup bullshit.

I wonder where I’ll be in four years, what kind of shape I’ll be in and what I’ll be doing. I’m just starting to come around now, after months of recovery. I didn’t work for nearly eight months, and I just finished a four month contract that was my initial foray back into the working world. My bank account and my ass both needed a little fattening up. And they got it. In spades.

I’ve been down so long, it all looks like up to me.

My first “real” ride back out on the roadways with my man Lovedog involved a woman turning right, right in front of me, and me hitting the side of her car.

The marginalization of cyclists continues…