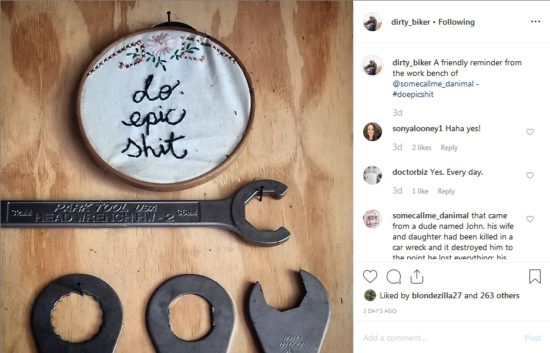 dirty stopped by the house for a night on his way around the last tour of the east coast.  as always, the doors are wide open for any family, as well as the tools, shitter, hugs, booze, and whatever else is needed.

it was days later when he tagged me on instashit, and when i saw the image it reminded me of the power behind something as small and simple as a cross stitch hung above my workbench.  why does it hang there?  well, whenever i am planning and preparing to take advantage of the fact that i am alive and free, i always find myself in front of my workbench fixing some piece of gear that will be needed for the next adventure.  and it is a reminder to make sure i do not hold back.

So the cross stitch… that came from a dude named John.

John’s wife and daughter had been killed in a car wreck and it destroyed him to the point he lost everything: his job, house, car, and health. he had nothing to live for and was on a quick path to a miserable end.  he had all but given up on living, and what was once a jolly, happy, gleeful man, was now so overweight he had trouble walking, and that was the most insignificant of his problems.  personally i don’t know if i could come back from that.

i did not know him at that time, but dude had some of the best friends in the world, without a doubt.  and some of them were friends of mine.

so a couple of his friends pulled a bike out of a dumpster and brought it to me and i fixed it up so he could have transportation and start to hopefully get on a positive path.  it was really all i could do.  in the end the bike was shit, so i gave him a new one with the promise he would use it to live a better life.  he was so thankful, so humble, and i could tell he wasn’t sure.  but what i did know was his friends loved him, and wanted nothing but the best for him, and they felt like having a bicycle would be the catalyst to him working through life, and not wasting away.

fast forward a year, i’m a couple days from leaving town to start a new life of my own (after losing everything – but nothing close to the degree as John), and i run into him working at a craft store.  while wondering around i saw that cross stitch and had to have it.  John, now healthier, happier, and holding a job, refused to let me pay and gave it to me as a gift with the promise that i would live up to it, just like he had promised me.

every day i do my best to live up to my promise, just like John.

i looked up an old friend of ours from a lifetime ago and learned John now has his own business and is doing really well.

so now it is time for you to step up your game.  take that chance.  lift someone else up.  make a positive difference. and give everything you’ve got.  and as cliche as it is, Do Epic Shit.

it's all bullshit, all of it. thesefuckingsoftpeoplewalkingaroundwiththeirheadsupthereassesnotlookingaroundtoseetheworldorenjoynatureorthecompanyofanotherhumanwiththeirselfentitledknowitallcantmakeamistakeeverybodygetsatrophypussyassattitudeandmindsetarethefuckingproblemwiththisworldandtheonlythingthatwillfixitisactualhardshipnothismanufacturedhardshiplikecrossfitorspartanraceoranyotherbullshitpansyasswannabeadventurecrapnopethesepeoplearepussiescompletepussieswitheverythinghandedtothemimmediatelynoempathynocompassionnoPASSIONnoloveforanythingotherthanselfimportanceandsuperficialhierarchythatisselfimposedinordertomakethemfeelworthwhilewhenalltheyareisatickorleechonsocietyafuckingcowheadedtotheslsughterwithnocluetheassholefeedingthemwillsoonbeslittingtheirthroatandchewingontheirgrilledassinaveryshortamountoftimesmilingwithnocareintheworldthattheywereneveranythingbutfodder.
View all posts by Danimal →

6 thoughts on “struggle and strife”