Yeah that’s right, I said Kansas City. Having experienced this event a few years ago, I can confidently say those kids in the middle of the country know how to throw one hell of a bike party. Crazy good trails and a party that could kill a horse. I couldn’t make it this year but our buddy Taddihog sent over a little photo dump of the party for our viewing pleasure. Things I learned from this: Speedos are for everyone, practice whiskey comes in a box and couches make good fires. Enjoy.

A very wise, sexy-as-fuck man once told me, as he swung around on a well-lubed stripper pole and smacked me in the face with a 14 inch purple dildo, “son, you can’t drink all day unless you start last night.” Sage advice to be sure, and Satan knows that I’ve made it one of my many mantras, but imagine if you will – and I know you can suckseed at such a task – the  aforementioned scene and replace the rod with a single-speed mountain bike in the middle of a dense forest in 90+ degree heat, soaked in box wine and Fireball, bleeding from every orifice, splayed out in the rockiest-bukake section of trail known to apekind – the Jigsaw. You may ask yourself, as I do daily, what is so wrong with the 8Lumens crew and their debaucherous brethren here in Kansas City? And why would they put on an event that draws 130+ riders and over 200 spectators to witness a couch being jumped whilst burning? Well, fine gentle-people, you have been warned, for we here in KC know how to party with our bikes on the finest single-track in the  Midwest; over 130 miles in the city limits. You may also assume that we live in a cowtown in flyover country with good BBQ and mediocre sports franchises and you wouldn’t be entirely wrong, but I have called this place home for 20 years now and our mt. bike scene is second to none. So, next time you are driving through, get the fucking MTB Project app and take a look: bring a big set of balls, a well-trained liver and enough room in your stomach for the best Mexican food this side of Tijauna. Then, next August-ish, sign up for SSKC and become a real-life TED talk, only with more thongs and dongs. 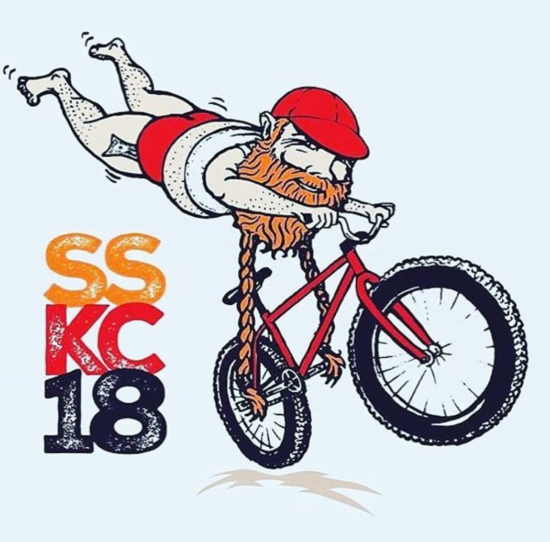 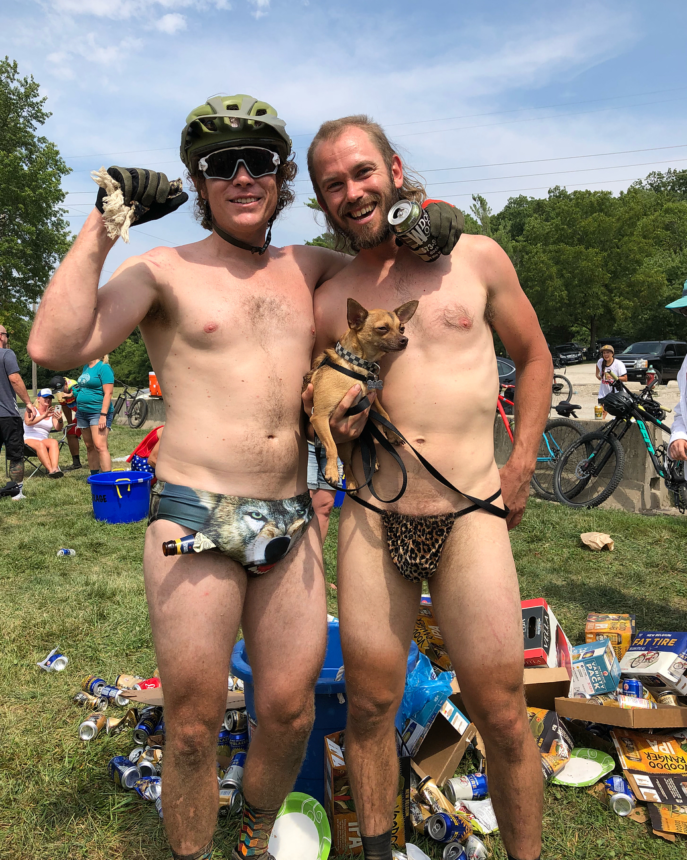 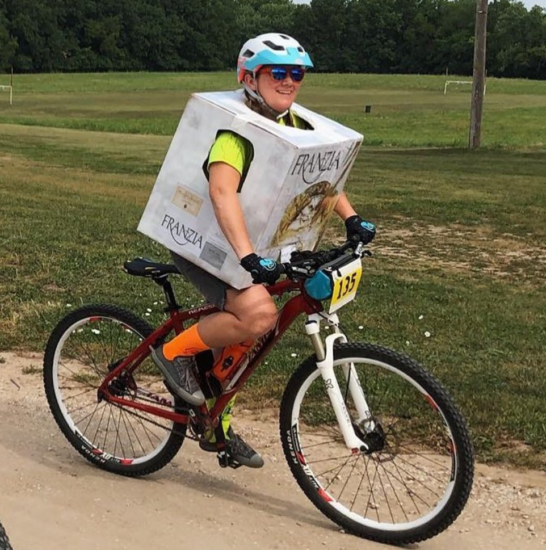 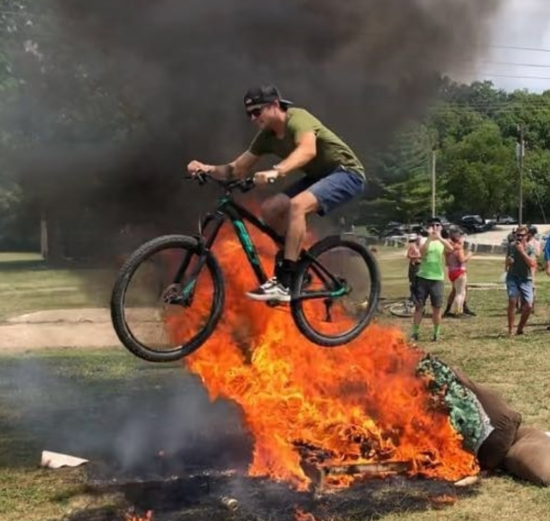 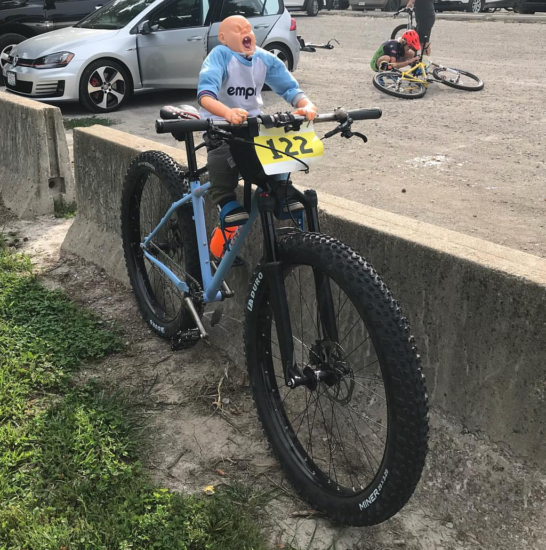 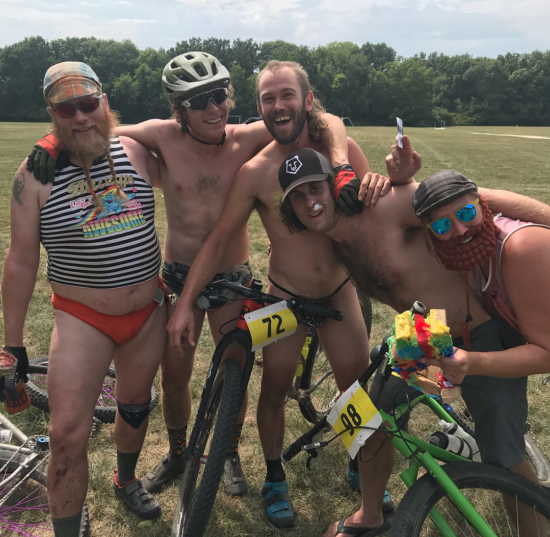 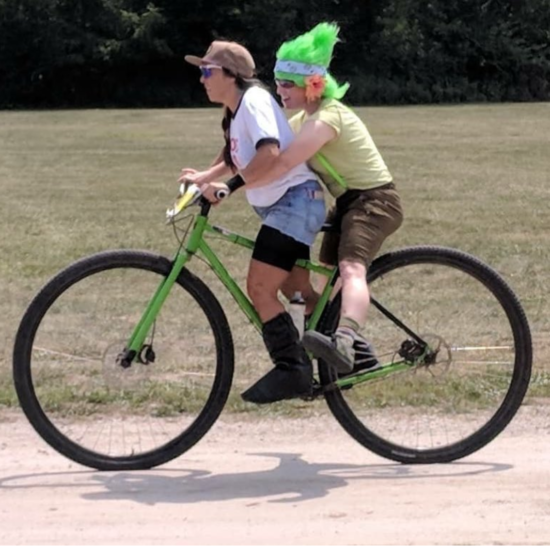 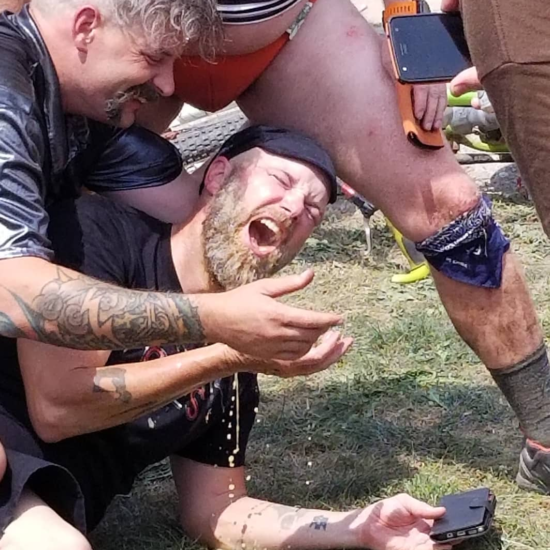 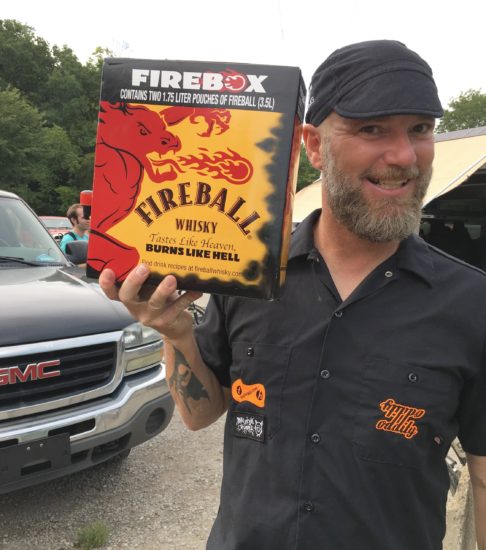 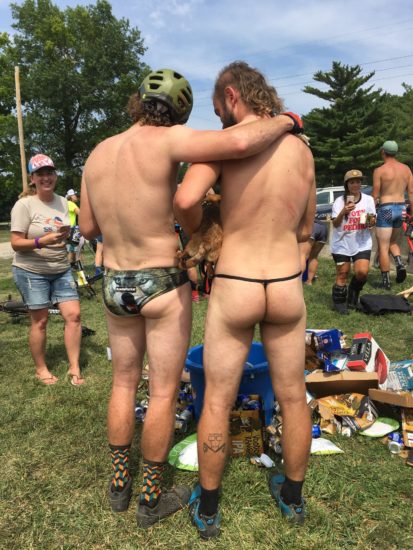 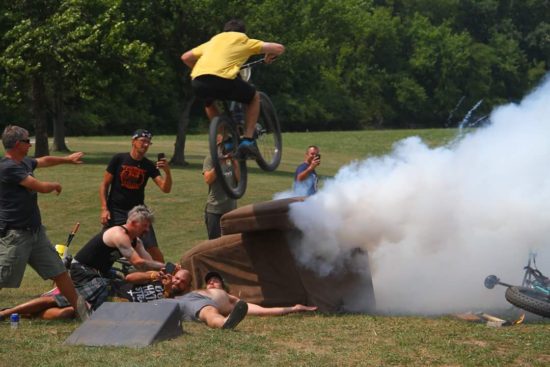 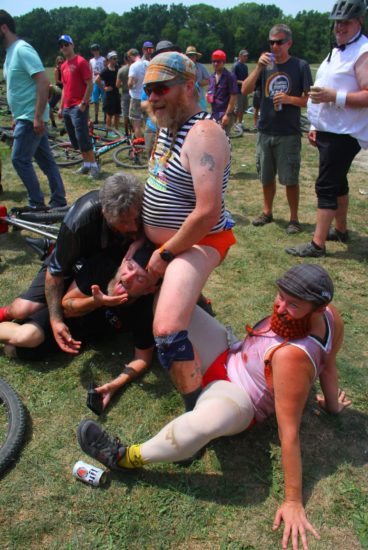 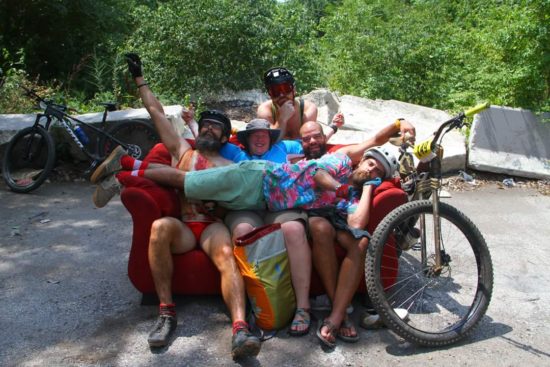 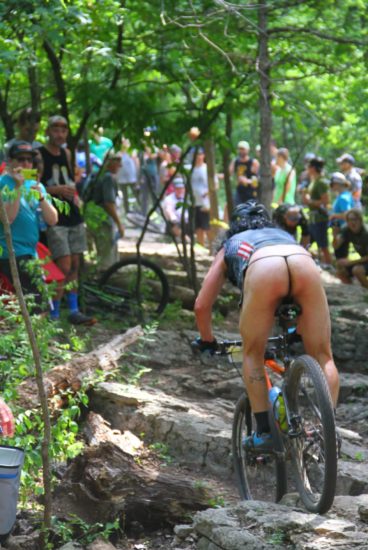 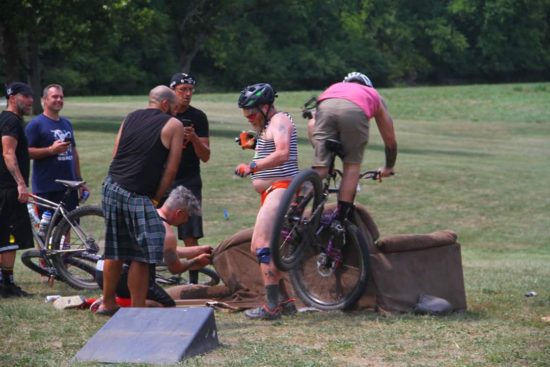 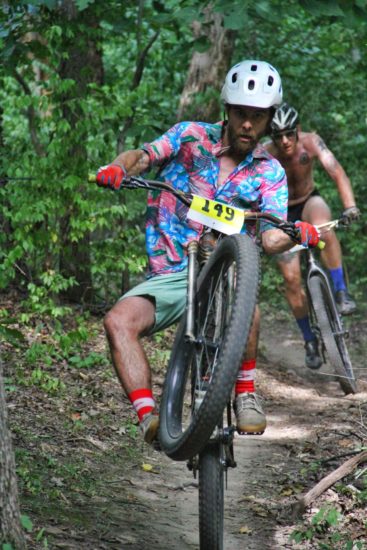 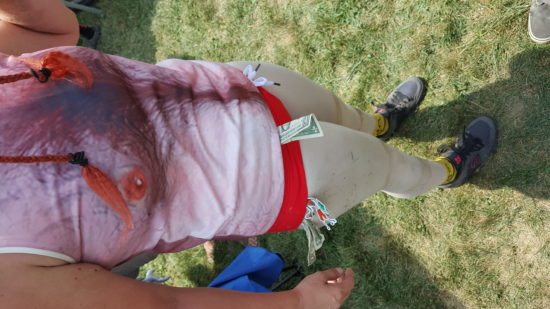 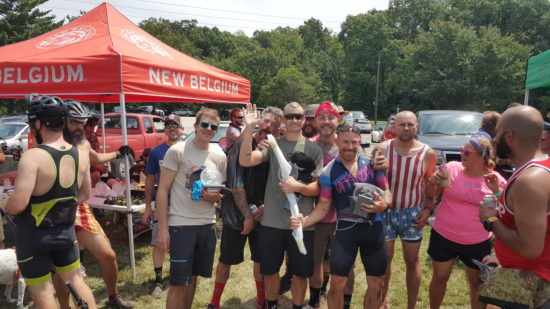 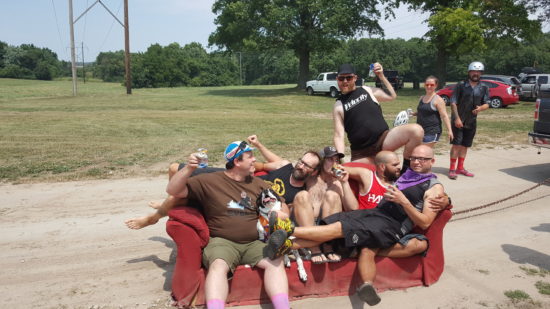 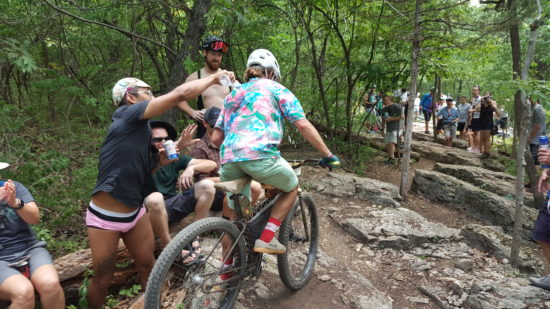 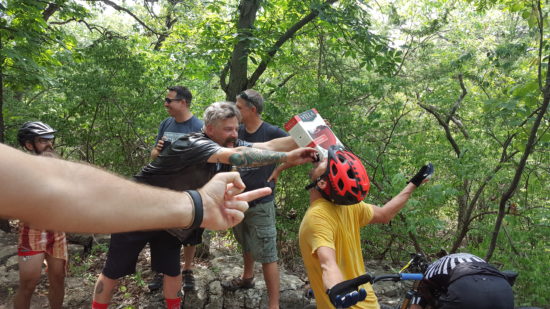 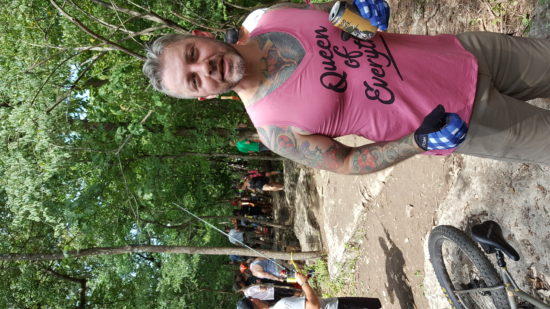 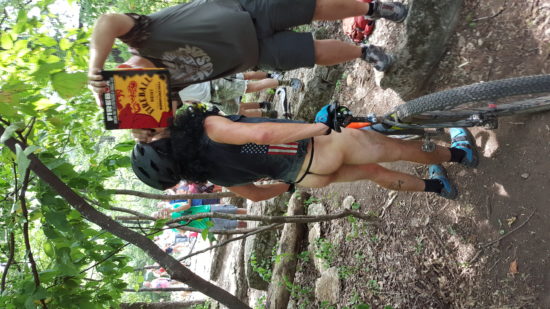 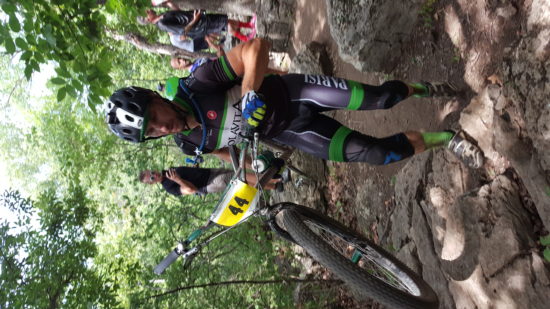 SSKC wouldn’t be such a kick in the taint without some heavy-hitting sponsors, and while I probably will forget a few and be shamed for all eternity, I will attempt to remember as many as my concussed, 67 IQ brain will allow. The first and foremost thanks go to our local trail-building group – known formerly as Earthriders – The Urban Trail Company, for without all the donations and volunteers, we would not have all the single-track with which to make this town a true mt. biking destination. This year we had sponsorship from New Belgium , One Star Bicycles, Velo-Garage and Taphouse , Hand-Up Gloves, Pedalino BIkes , Velo-Plus , Outvi Oddity Cycles , Pete Barth Photography , Frontier Bikes , Bell Joy Ride , Ramon Orduna -kick ass street tacos , The Ladydudes , Kevin Nierman ,  Club Ride etc. etc.
SSKC is on FaceFuck and the Grams, and I am under Taddihogg on both as well.

*I kept some of those pictures sideways because that just seemed to fit the mood. Get weird in KC.