I used to believe that being the first patron into the Yucca Tap Room was physically impossible. Something you’d hear about on Sagan’s Cosmos. A break in the logic of our universe. Clearly it has to occur because someone has to be first, but it can never be you. A drunken Sisyphus perhaps. Show up as early as you want but you’ll never be first. I have arrived at 6:04am to a crowd of Euro soccer fans wildly cheering a game of footy. I’d been there at 5:55am to find the 3rd shift enjoying their happy hour, and told I’d have to wait until 6am on the nose. And that’s fine. But who had been first? Or was he the first to never leave?

Until this time. We had caught our Black Swan.

I rolled up at 5:45am. Nebraska and Pugsley were already there. Doors locked. Just before top of the hour our barkeep pulls up out of the darkness.
“Is today y’all’s Tucson thing?”
Yep, sure is, 6th annual.
“Thought it was always November?”
Not this time. We know it ain’t 6am but can we grab a stool if we promise to play nice?
“Help yourself.”

Within a few minutes the rest of the posse rolls through. Tallboys and shots of whiskey all around. A brief explanation to the regulars why a bunch of oddly dressed bicycle types are occupying their seats at first call.

What ensued was your garden variety 120 mile group ride. We stopped at all the c-stores along the way. Restocked with road sodas and beef jerky. Every 10 miles or so we’d stop to circle the wagons and drink a beer. There were three first timers up to the challenge and Beer Century tales of years gone by were told. 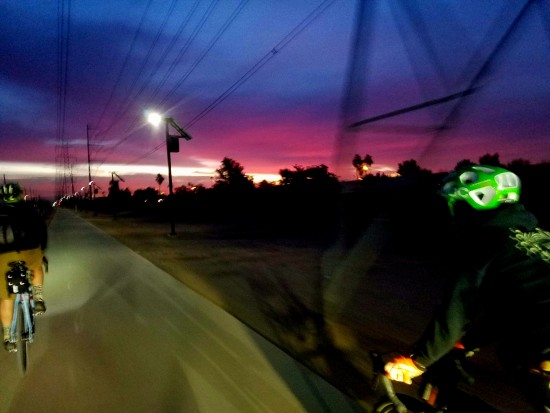 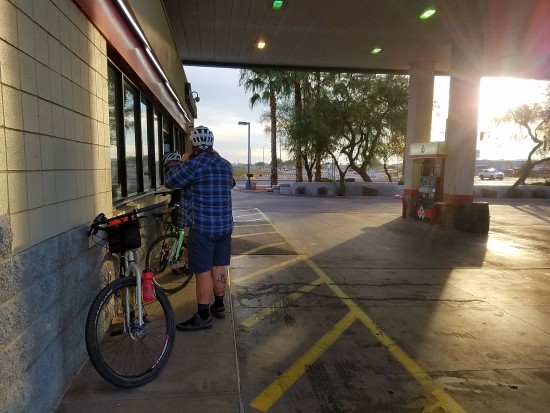 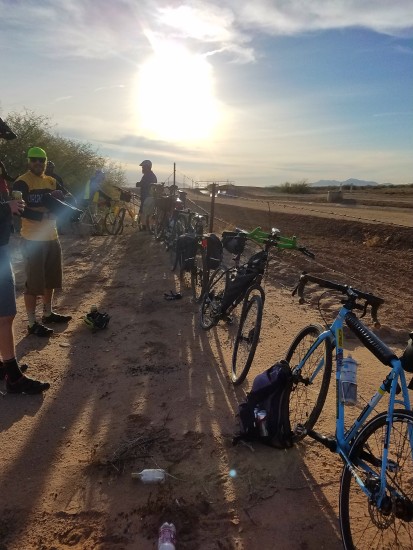 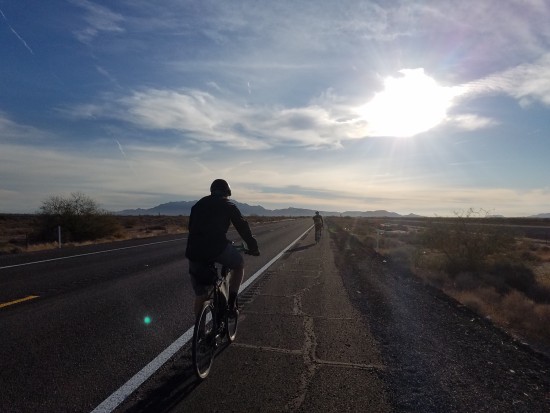 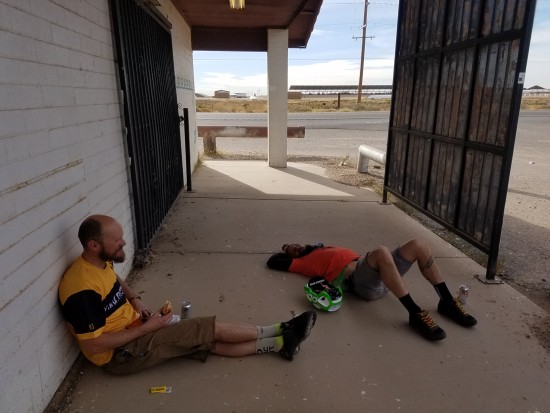 At the exact halfway point in the route there’s a neat pecan grove. It’s right where we jump to a frontage road with much less traffic. A perfect place to host a picnic of tubed meats, cheese, beer, whiskey, grass, and beer.

It’s also where we were to pick up our Tucson contingent who were riding an out-n-back. A gentle group of misfits who saw it necessary to run an escort mission and guide us into town; lest we get lost on our 6th outing. Only one of them showed up. A skinny half-drunk roadie awaited us in the pecan grove. Dance party underway all by his lonesome. He happens to be engaged to the head brewer of a fairly notable brewery down in the Old Pueblo. And she had sent him with rations. 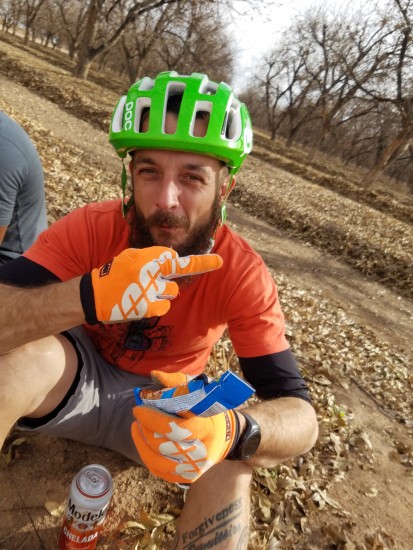 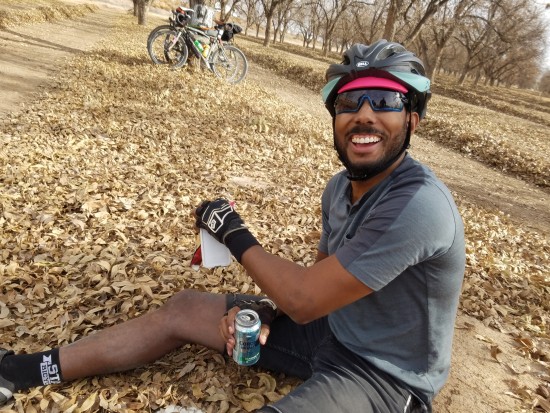 Shortly after lunch a van carrying several of our significant others pulled alongside. After making a few lewd gestures they motioned that we should pull over. Spilling out of the van they rather proudly presented us with a full cooler and snacks. This was not a planned stop, and it was good. Short rest beers and shots of whiskey had stoked the fire for a pit stop at the travel center down the road. Here one can acquire many “wild west” trinkets, amateur grade fireworks, and a DQ dipped cone. 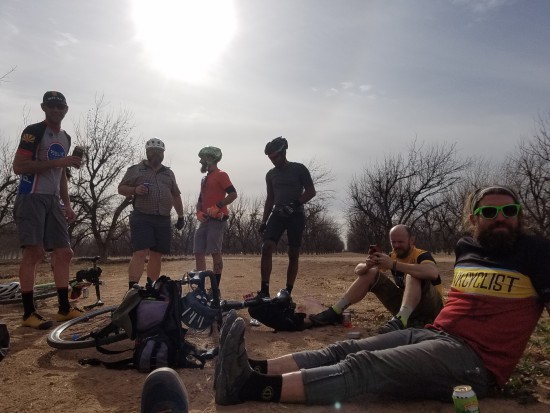 At the northern edge of metro Tucson we switch frontage roads and make a final supply stop at a well stocked Circle K. And right next door there happens to be a tavern. La Tumbleweed Lounge. The kind of place where you order 10 bottles of Tecate and are presented with a fully iced bucket and a bottle opener. Despite the fact that we were being eyed by the entire crowd, I took this to mean the bartender thought enough of us to handle ourselves.

A little further down the road we hit the Tucson Loop. The last 22 miles all on paved multi-use pathways. It’s a bit deceiving since you can see town “right there”, but it ends up taking some time. Fortunately though we had alerted the locals to our pending arrival. And Nate, the proprietor of Blue Dog Bicycles, intercepted us with cold beer and bacon. Nate is rather skilled in the bicycle party arts, and provided a nice last pit stop before we dragged ourselves into town. 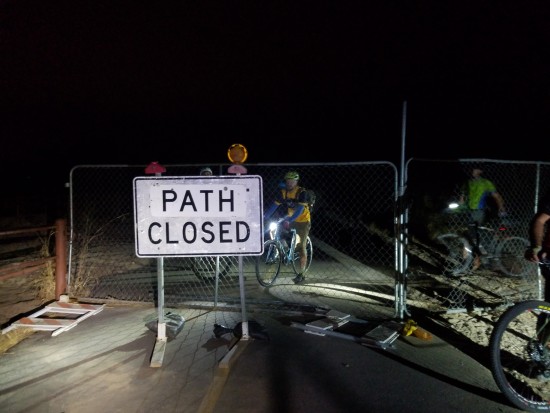 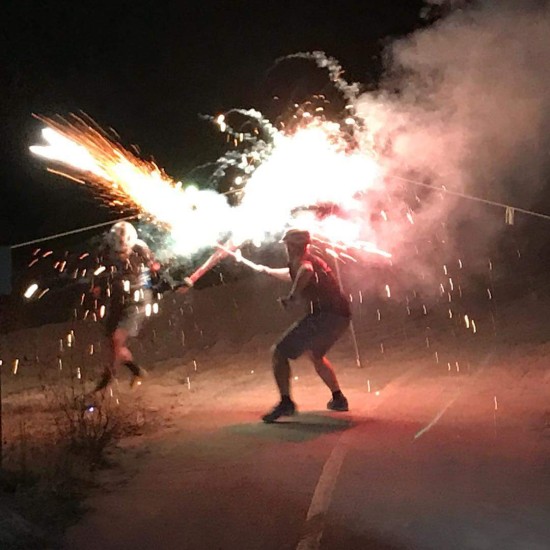 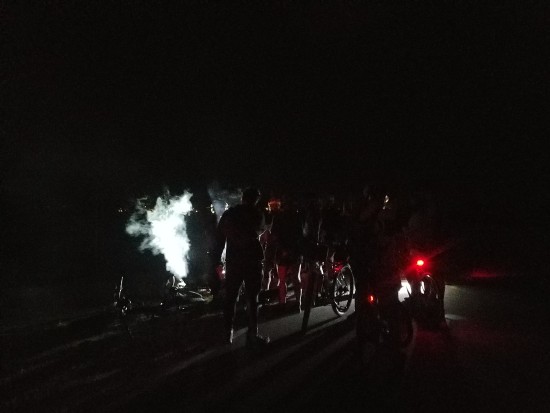 Upon arrival tequila, beer, and burritos were consumed. There were a couple Irish goodbyes but those that drank the tea lasted a little bit longer.

I’ve always viewed this ride as making something out of nothing. Arizona is a fantastically beautiful place with many amazing trails and roads to ride. But the I-10 corridor between Phoenix and Tucson is not one of them. Yet since we have friends in the Dirty-T and there’s a “point of no return” vibe to the one way trip, it’s been turned into an annual Thing. And new people keep showing up for some reason. So I guess we make it sound like a good time. Because it is.

7 thoughts on “Beer Century VI ~ Early Bird Gets the Stool”