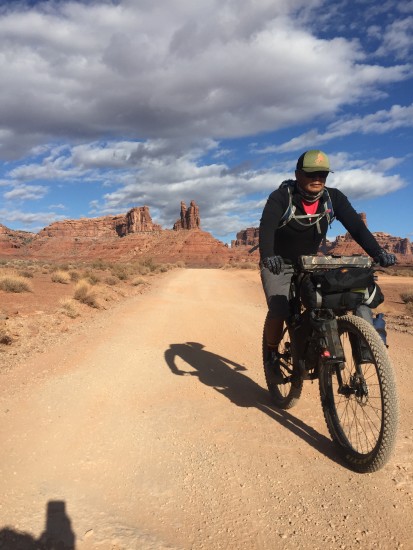 You’d think that, by now, I’d be good at this. Packing some stuff on my bicycle and riding into the sunset for a few days would be second nature to someone who’s done it over and over again. But I have come to find out that my second nature is the same as my first- and that is full of wrong moves, forgetfulness and new variations of old mistakes. My go to wrong move is to put off the packing until the lastest of minutes. It is a sure way to add some drama (or tragicomedy in my case) to your adventure. It’s been my experience that many of the things I have forgot to pack can be replicated using a beer can and some thinking, so I have gotten good at something…

But. Assumptions will do what they do. I’d figured I could just grab some beers at the last minute since I like a sports beer, not that heavy crafty mouthful some of y’all enjoy, and then they’d be cold to boot. So it was that I found myself, having left the luxuriously easy-peasy land of the lotus eaters, all warshed up on the sandy stretch of Arizona that is the Navajo Rez. I was meeting a friend of a friend to go ride bikes loaded. Surprise! The Rez is dry?!? Dang! I drove the 45 miles each way over to Mexican Hat to smuggle a case of cold Coors (#thatsthewrong) into my bike bags. Watch old bandit run, indeed. 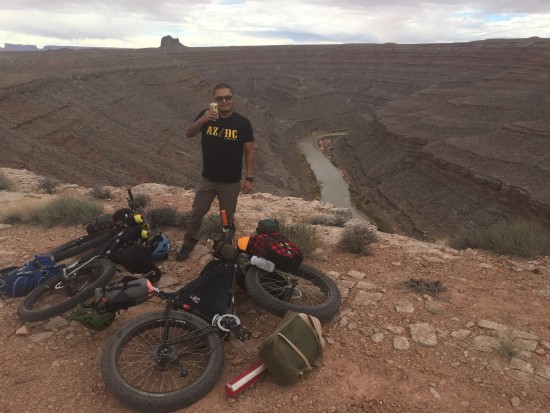 It can be odd meeting a real life person that you’ve only interacted with digitally, but Jon Yazzie is a gracious and welcoming fellow and we are both bike nerds so joining forces was seamless. We felt each other up about departure timing. I wanted to leave right away, having been in the car for 2 days. Jon wanted to wait for his new high top shoes to arrive, having broken his ankle a couple months before. Starting our team work off in the right spirit, we did both. While waiting for the full moon to rise and the package to arrive we discussed logistics and gear, as you do. I was quite a bit overfull with water because I’ve been without it in the desert and that suuuuuuuuuuuuucks. Jon set me straight about the resupply options and I was able to ditch some weight. Sadly, this did not really lighten my rig up that much.

The route was to take us out of Kayenta and over to Mexican Hat. Jon wanted to fine tune a route he’s been working on for his fledgling undertaking, Dzil Ta’aha Adventures. This project aims to get Navajo youth outside in order to foster a love and understanding of their heritage, and to promote wellness in a group especially susceptible to a sedentary lifestyle’s health risks- both mental and physical. Jon is an administrator at the high school (go ‘stangs!) and is involved with several vocational training programs there. These kids have very little in the way of resources. If you’ve been to the Rez, you will have seen the lack. There is “nothing to do”, and “nowhere to go”. The outdoors is literally all they’ve got. If Jon can get them interested in the amazing local landscape they will have both a playground and a classroom, a window into a rich history hidden in the rocks all around them. And, ultimately, this could afford these kids sustainable (on every level) employment in an area that lacks opportunity- they could guide trips and share the riches with you…so much to look forward to.* 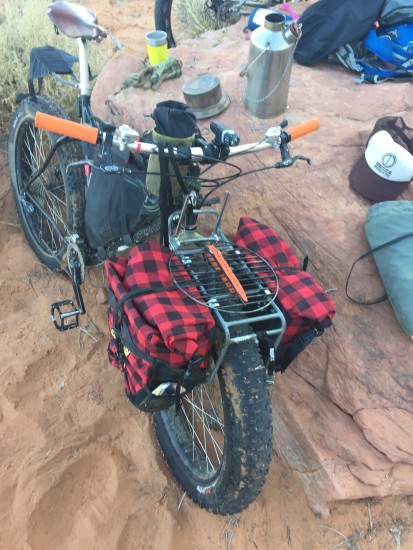 I can only speculate on what the locals thought as their headlights illuminated 2 jackasses on loaded bikes washboarding out the sandy sandy canyon, but I’d hazard they thought we were dumb and lost. (1 out of 2…) Our camp that night was a level patch of sand in the shadow of Comb Ridge. We had a small campfire and an #ultralight #bikepacking grill, and that’s half the ingredients for roasted chile quesadillas. Myself, I eschew the ultralight in favor of the ultradope, so I like to eat as well as I am able while on bike tour. Your freeze dried science food bags are OK when it’s required, but that’s never my first choice. I believe Jon was surprised when I began pulling actual foodstuffs out of my bags, though he has an excellent poker face so who can say? A cutting board (those super thin plastic jobs are so handy), some fresh pasillas and serranos, (hey!)Monterey Jack cheese, LARGE flour tortillas (the corn ones are- unless homemade- not as good and they dry out and fall apart)- all things I remembered to pack. 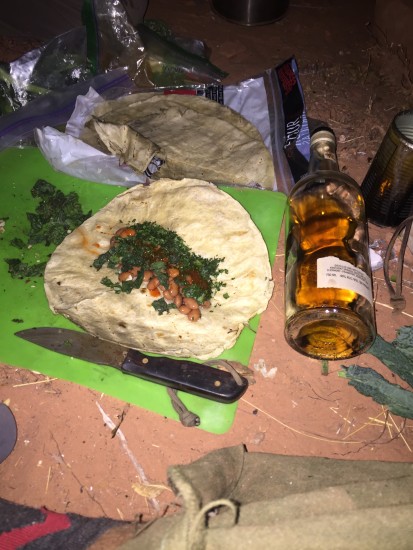 As a fan of western movies, you will no doubt already be familiar with Monument Valley. There is a lesser known story of the Old West Jon wanted to pursue with this route. In the classic canon my favorite villain is the Robber Baron. Easy to identify as a Black Hat, this moustachioed ne’er-do-well is always found hosing the locals by tying young ladies to some railroad track, stealing their land, poisoning the well and generally ruining the square dance. In Monument Valley, the baron came in the form of your creepy uncle Sam, looking for uranium. Scraping it up and spreading it around. You can read the story in the book, Yellow Dirt by Judy Pasternak. In the morning, we rolled by the Adakai homestead. It remains, a monument itself- a testament to whatever aspect of the tale stands out most to you as you behold it. I hear tell of sad, criminally foolish greed and a sadder, even more criminal disregard for our shared environment. Ironically, for me as a mountain bike enthusiast, much of the poison dirt was transported to form the tailings in Moab… 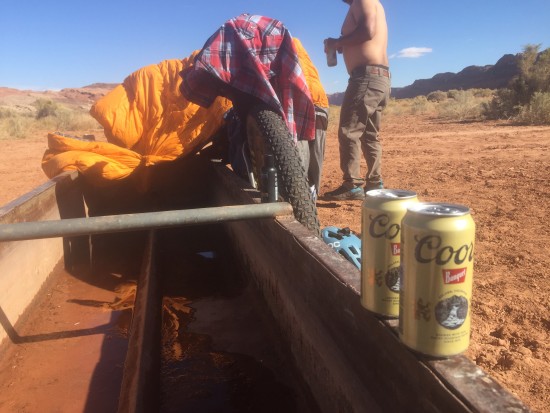 We rode on,when were weren’t pushing our bikes along the seemingly trackless sand floor of the valley. Push. Jon really…sandbagged…me with this route. 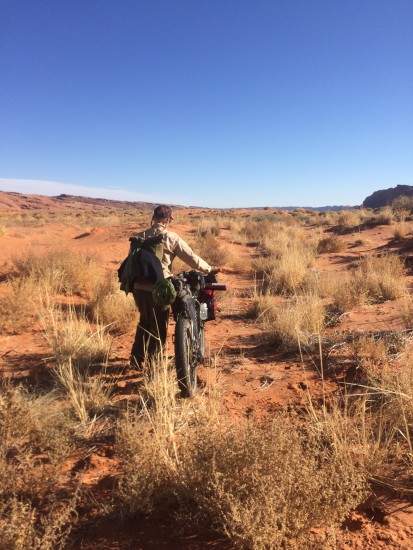 Push.  Next time I go, I want a more refined ride-oriented YES, not the raw and uncut MAYBE.  Push. Beats a NO, I guess, but it’s hard to be certain. Ride! His GPS said we’d logged 100 miles give or take by the time we rolled into the bar at Mexican Hat, and that seemed questionable but possible at the same time. Alls I knew for sure was there were cold beers that I didn’t have to lug, hot food that I didn’t have to cook, and tempting hotel rooms right next door. The old clock on the wall ticked past one gigantic Navajo Taco and several beers to arrive at what really time it was- time to get a hotel room like the soft “adventurers” we are. Hot shower, clean sheets…these things should be truly appreciated and deeply understood and never taken for granted. 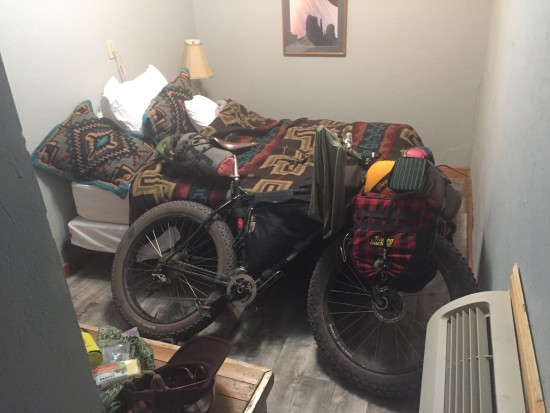 Upon our awakening the rough and tumble started right back in. Just outside our room we were threatened by a large, white, feral dog who felt we might interfere with his trash can raid. Hackles up and growling, he stepped towards us (2 grown-ass men?!?) before backing down and slinking off. Outside the cafe, we talked with ____, who was enthused about our rigs and wanted to compare notes. Your typical #biketour unplanned type interaction. 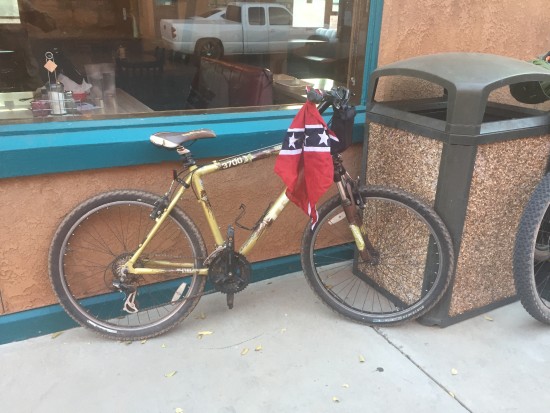 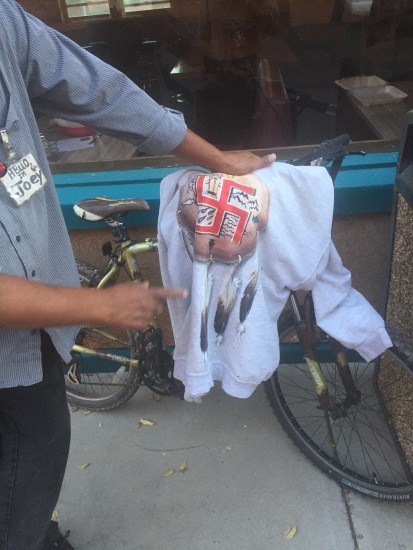 He has an interesting take on the rebel flag (basically a big FUCK YOU to the federal government, which he feels has fucked over him and probably you and me, too- I find it hard to disagree more and more these days)  and the swastika (according to him an old Navajo design indicative of 4 important elements: rain, mountains, people and something else I forget) and was planning on proudly displaying these items on his then-soon-to-be-upcoming tour from Flagstaff back to Mexican Hat. He wanted to bring awareness to the issue of Bears Ears National Monument (see again the federal government fucking us over, as this current shrinkage of the monument puts a lot of uranium back into play for mining companies…) He was going to do this tour on his shitty beater, with canned food and small campfires. I liked his style, #jiverecognizejive. Departing, we pedaled up the hill a bit for a gas station resupply of hot sauce, beers, and beer. The usual. 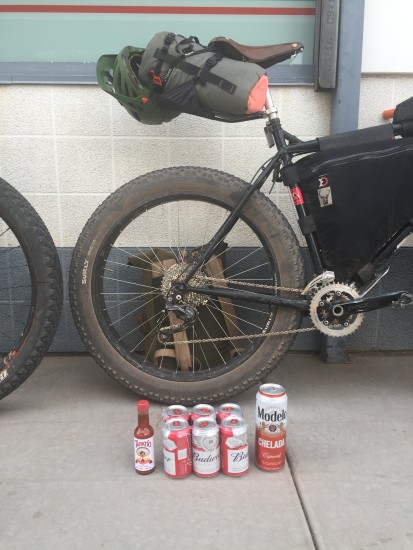 And then it was one wrong turn after another in search of the dirt road that parallels the highway. How often have you heard about that one? And then it was highway miles and miles to the real, actual dirt road to enter Valley of the Gods. Which is stunning. 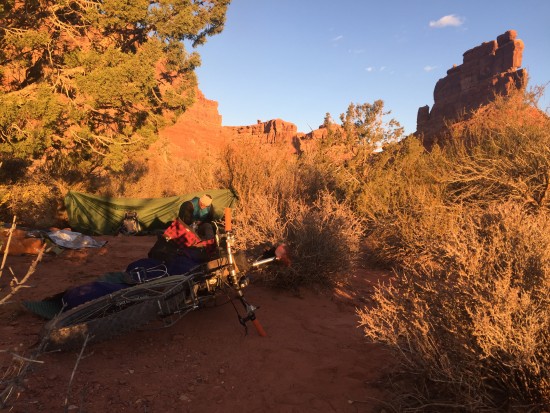 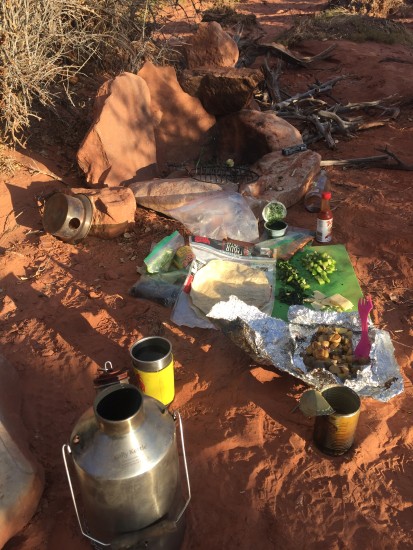 If this were a fictional account, I might talk of how all the campsites were wind-scoured and/or peopled. Of how we opted to make our camp in a wash, behind some trees for a windbreak and some privacy. Of how we strung up my old green tarp to further shield us from the wind and the view from the road and had ourselves a little campfire. To my mind there is little finer than that feeling which comes with the end of a long day of pedaling, when you feel so wrung out and quiet that you can be completely satisfied with sitting wherever you are. Just sit and be. If you’ve got some whiskey along, say a bottle of that Basil Hayden’s good good corn squeezin…why, then you’re alright. You’ll want some food soon enough, but that moment of peace is to be savored all on its own. 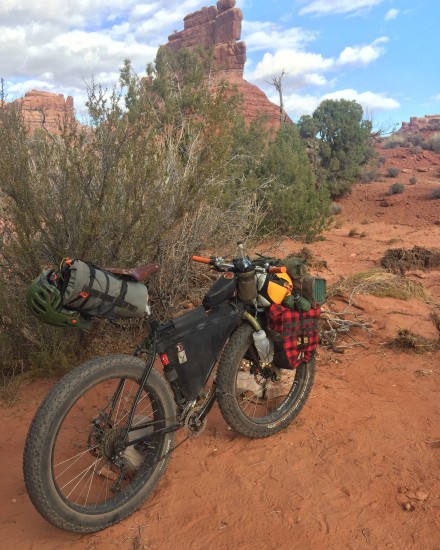 Go get some. Even if you blow it completely, it’s a Good Time. As always, you don’t need fancy gear just be willing and make it happen. There’s a lot (alot alot) of internet stuff-havers who don’t do shit. Let your motto be: Do shit, don’t have shit. Or some shit.

*As Dzil Ta’aha Adventures is a fledgling just barely getting it’s feathers, it could use all the extra morsels it can get to grow big enough to take flight. If you are (or someone you know is) in a position to drop some fat worms in their gaping maw, it will help some kids who truly lack resources. They need everything, but primarily: money, bikes (plus size and/or fat are suited to the terrain), camping gear. Contact Jon via email…jonyazz(at)yahoo(dot)com 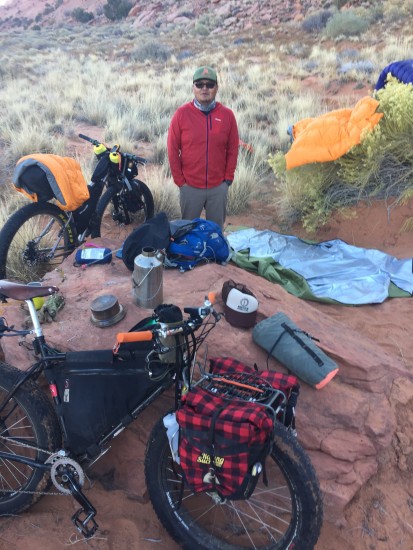 6 thoughts on “Notions of chance and fate are the preoccupation of men engaged in rash undertakings.”