Interbike, the annual trade show pilgrimage to the desert where bike dorks from all over gather to party like it’s spring break and maybe do some business. For the 14th time, I was one of those bike dorks pointing it towards the giant patch of light pollution in the desert. With the show moving to Reno next year, there was definitely a weird vibe this year. The show was much smaller and very few major players were there. Like when I say small, I mean it was REALLY small. I actually think the expo at the Whiskey Off-Road was bigger than Dirt Demo this year. Media folks were just wandering around scratching their heads with practically nothing to report on. People who did have booths were mostly just sitting around bored, fucking around on their phones and sneaking drinks. Between the internet, Eurobike and major brands doing their own private releases there really wasn’t much to see in the giant neon-lit Vegas convention center.

There has always been this “It’s cool to hate on Vegas” attitude at Interbike. I get it, I really do. But it ain’t that bad if you actually try. Sure, if you are an industry drone chasing those pre-season orders and just going from meeting to meeting. Then to every lame party at night because somehow Vegas is still a novelty to you, and you don’t mind spending $15 on a drink. Well, then it will be miserable after about 36 hours. But over the years I have found that to be a ridiculous way to roll. Drinking a 12 pack while sitting on the wall of a Casino is my entertainment of choice if I’m stuck in town. But there is so much cool shit to do, on and off the Strip, that there’s really no reason to hate on it. The street riding is great, rock climbing at Red Rock, a couple badass skateparks and Reverend Dick even showed me some rad Ethiopian restaurants. There are all sorts of things to do that I like to call them #AlternativeInterbike. Here are some examples from this year.

First, there is catching up with old friends from other parts of the world. Like my buddy Caleb here. He runs a bike company in Kathmandu called Portal Bikes. It’s badass. You should check it out 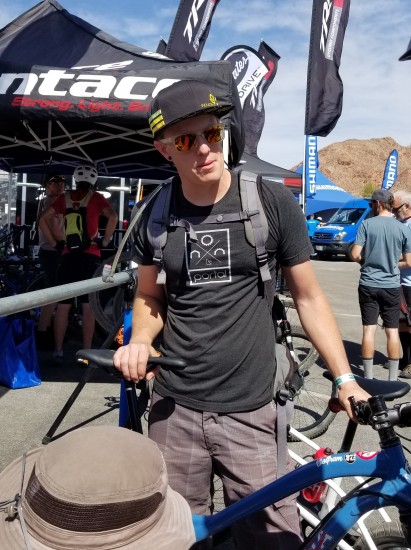 Then there are people you have always wanted to meet that you just might end up having a beer (and other things) with. Yo what up Floyd and Dave (and Souphorse) 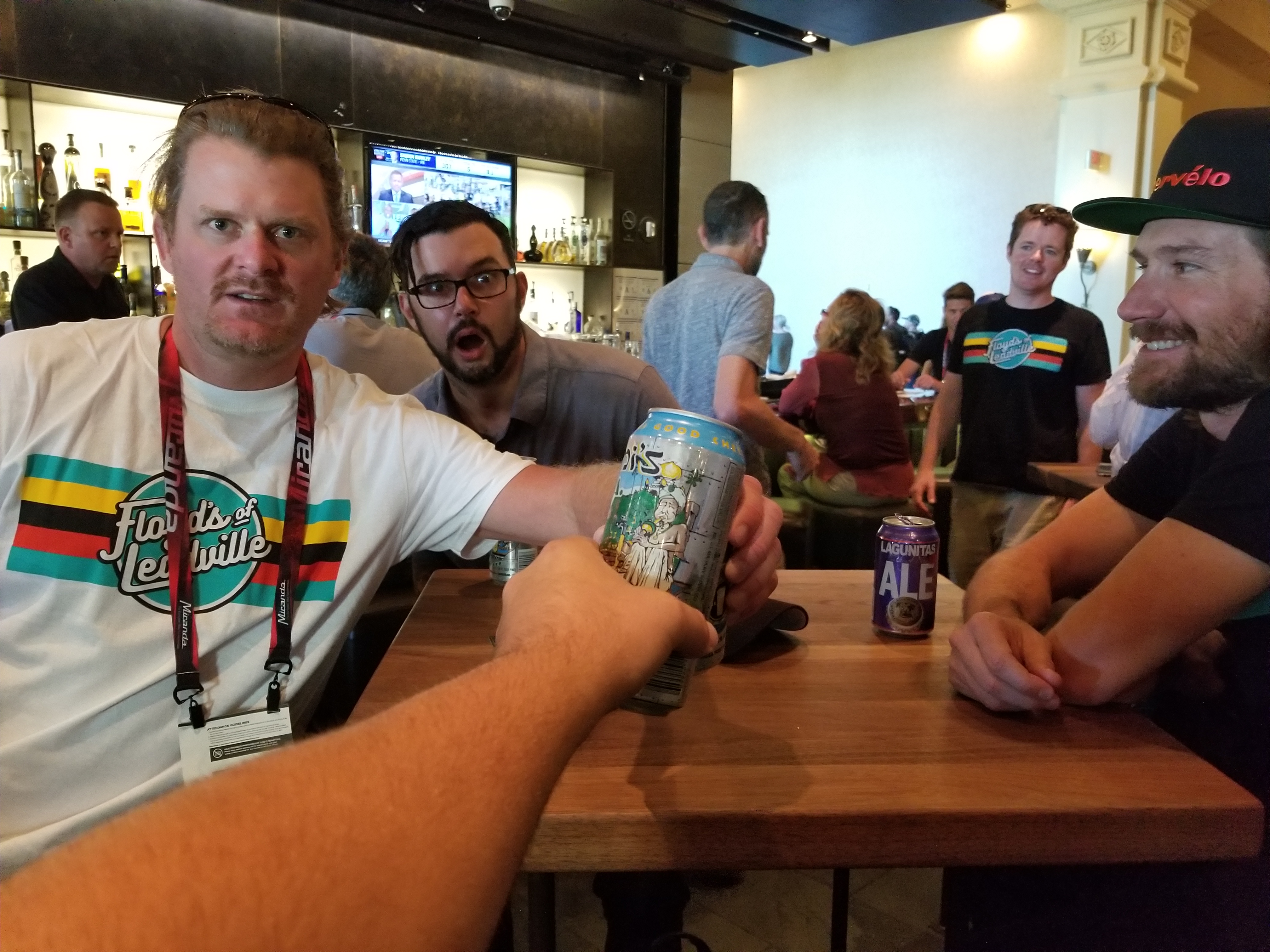 I found this camping/cliff jumping spot about 10 years ago and I have made it a tradition every year. Invite a few friends, drive out into the desert with a shit-ton of beer and jump off cliffs till you scare yourself because it’s too dark. This year I decided to have a more open invite and see who showed up. We had about 30 people out there hucking their carcasses through the air into Lake Mojave. Good shit. 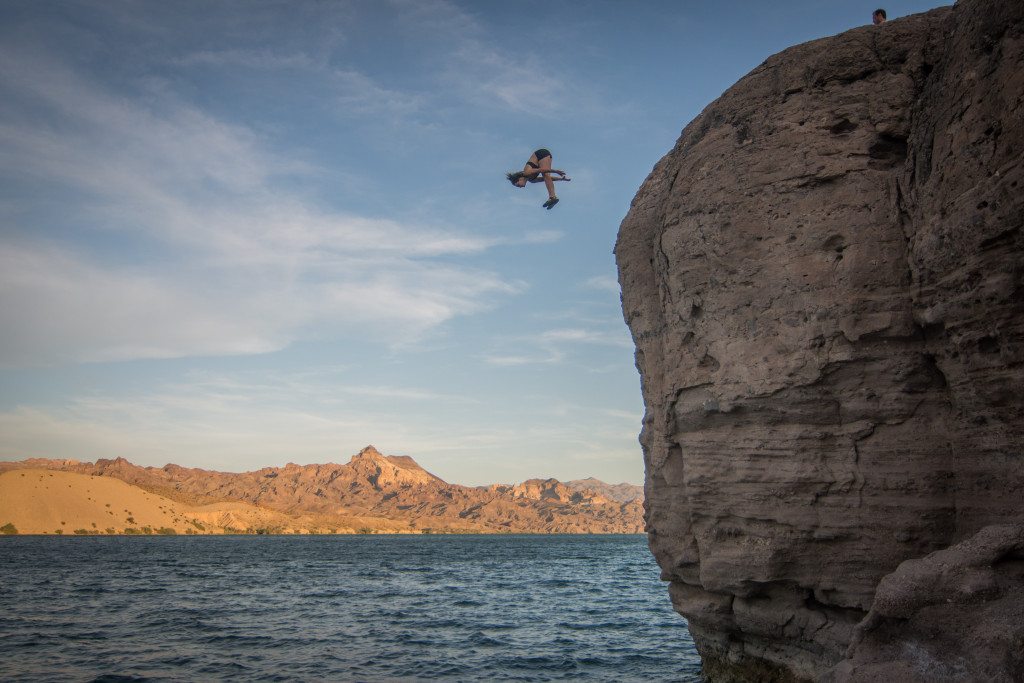 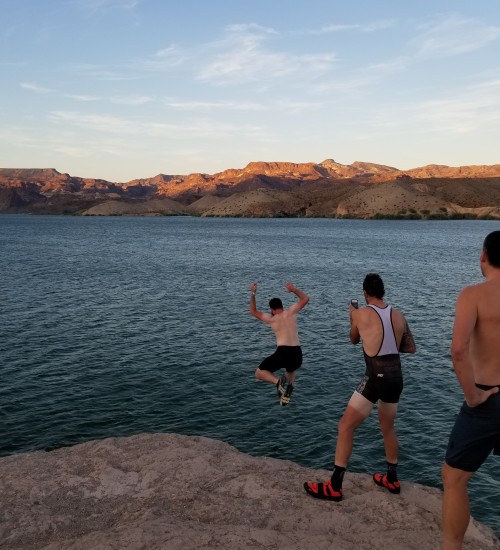 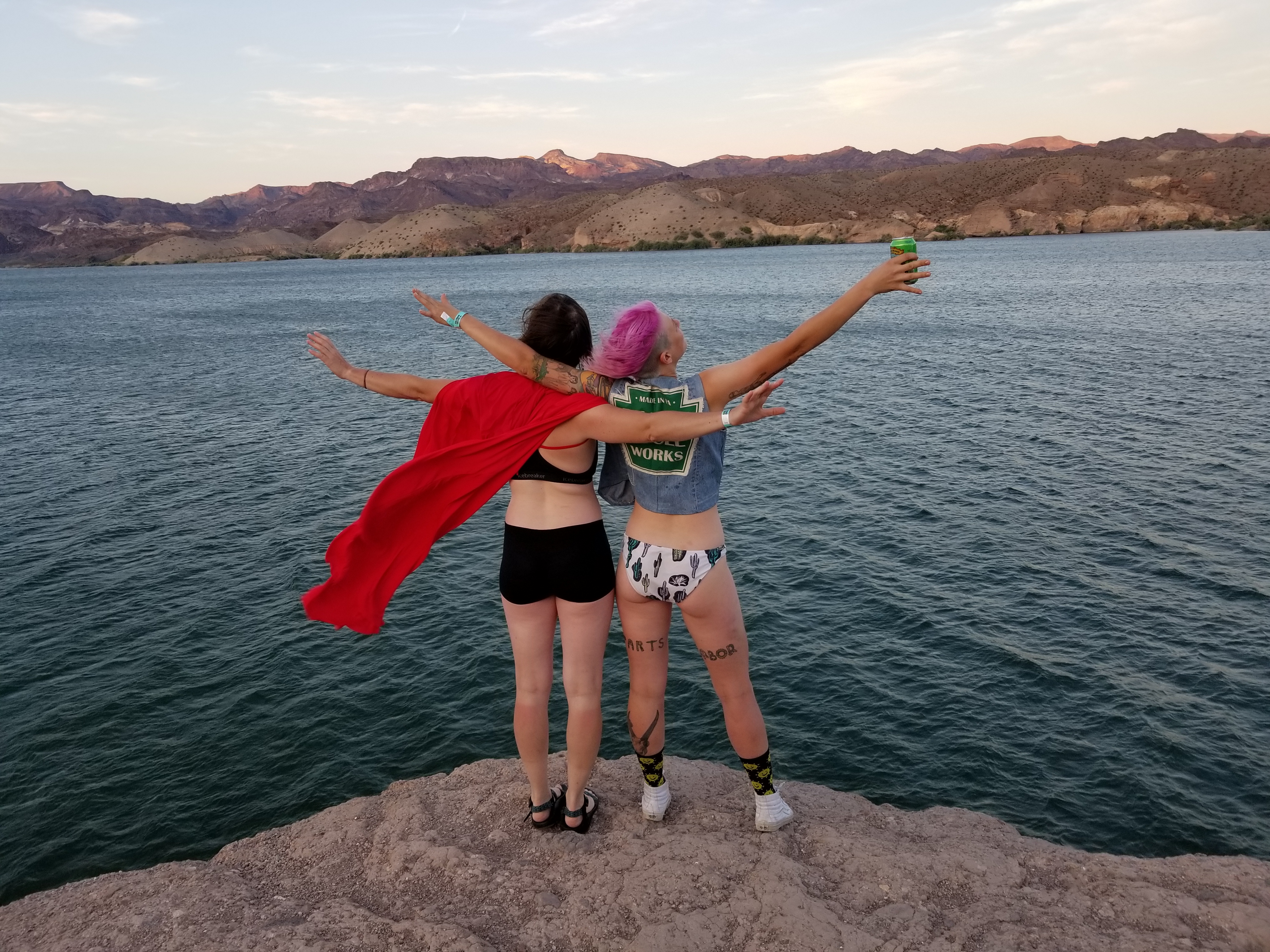 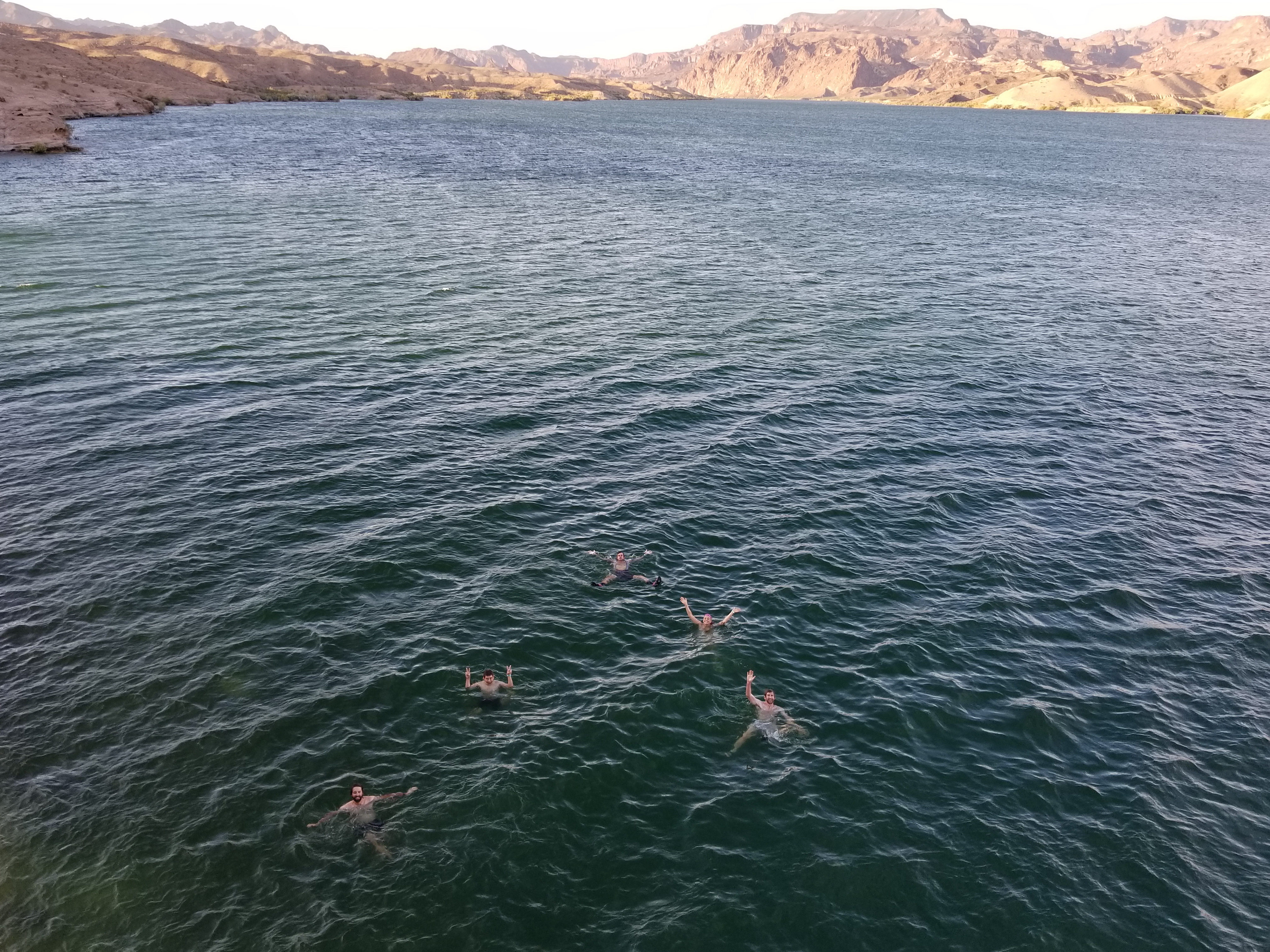 There was only a little bit of carnage. Not bad, considering… 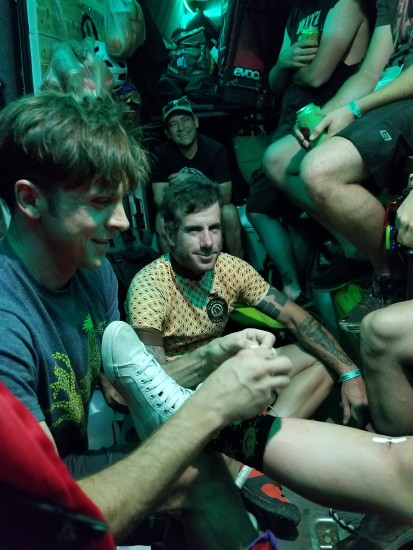 The media was so hard up for shit to write about that my little cliff jumping party made the daily show news. 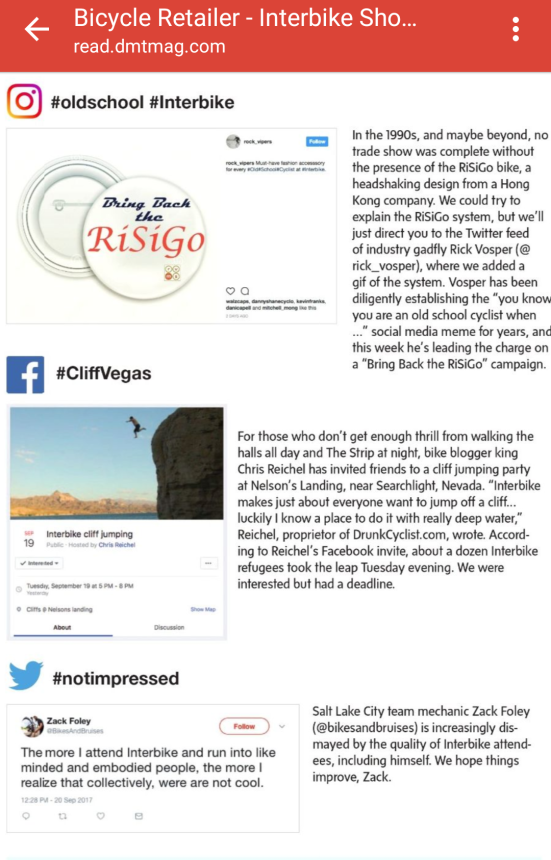 Watts and I decided to sneak into this little industry party and float around a lazy river and drink free beer. 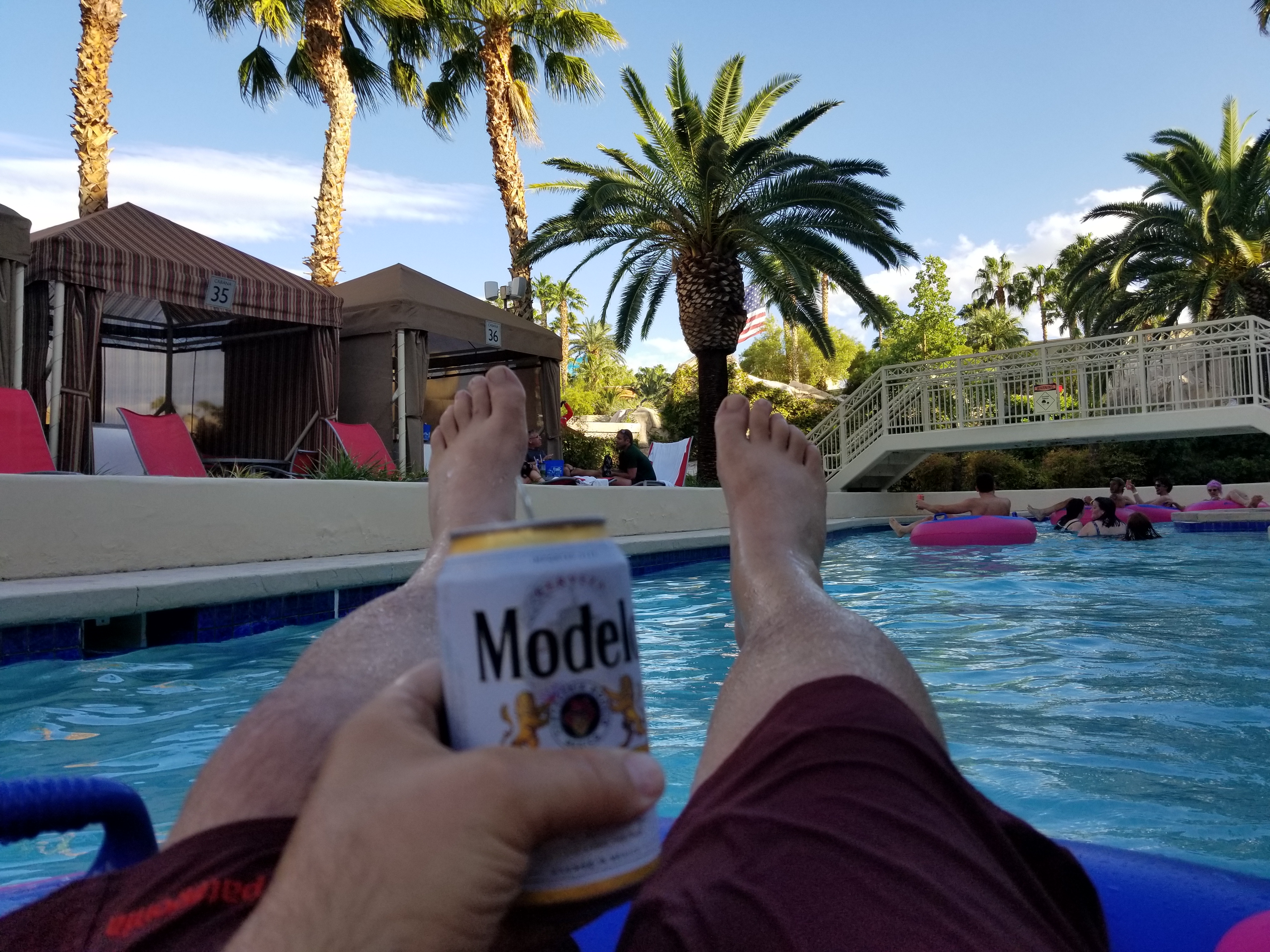 If you don’t read Watts’ blog you are missing out. Check it HERE. 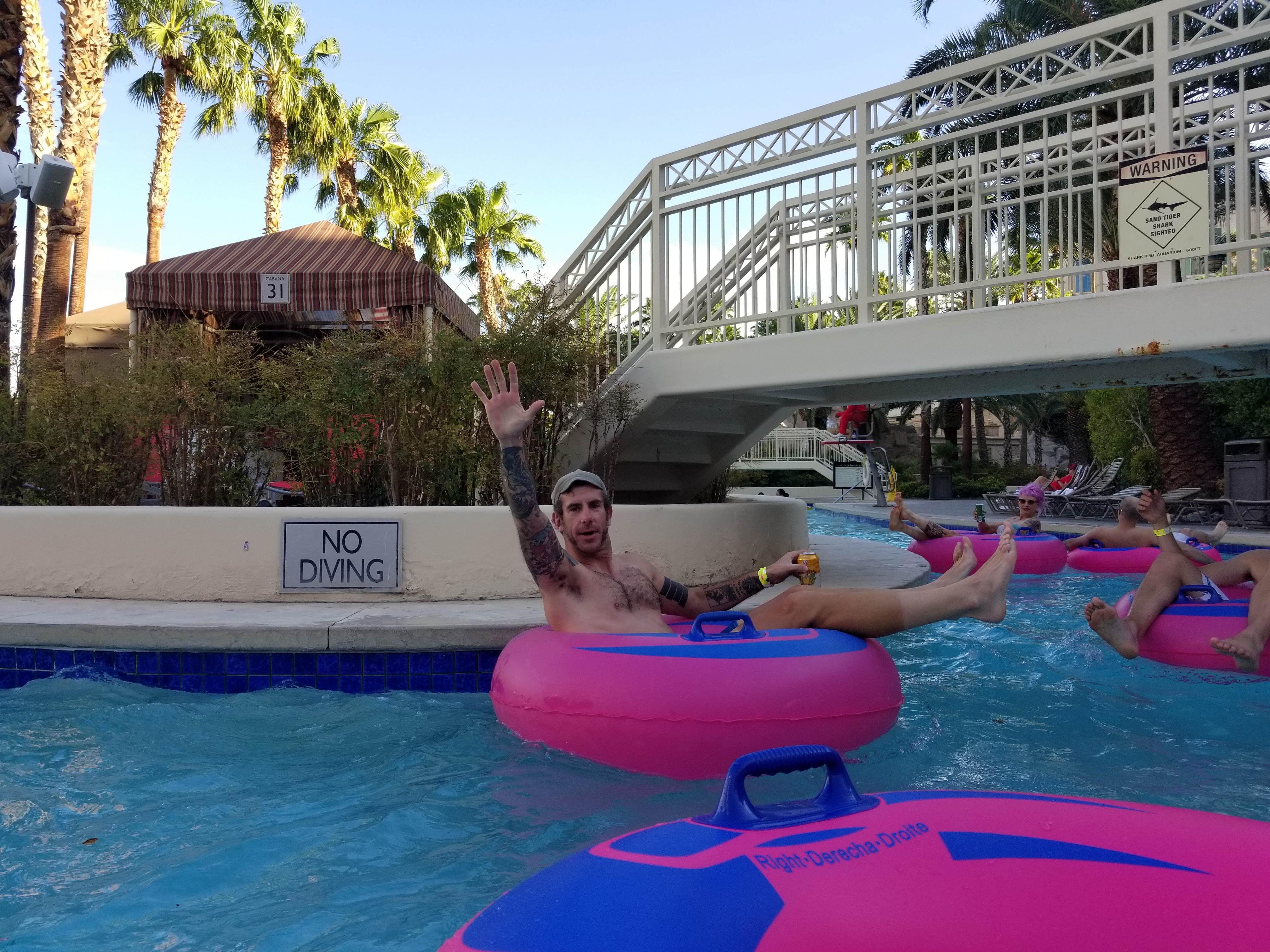 It wasn’t all fucking around and drinking with friends. There was one little bit of wholesome goodness. The Ride for Reading book delivery happened the last day of the show. The Las Vegas cycling community turned out in force but only a handful of people from Interbike came to help. It never ceases to amaze me that all those “cyclists” in the convention center can find so many excuses not to ride bikes and do good. You want to feel like a rock star? Try riding a bike, with a backpack of books, into a recess yard filled with 400 cheering and screaming children. You ain’t lived untill you have done one of these. We have talked about Ride for Reading before and we will keep preaching it. Bikes and books for children might be the only thing better than bikes and beer. Drunkcyclist is for the children. 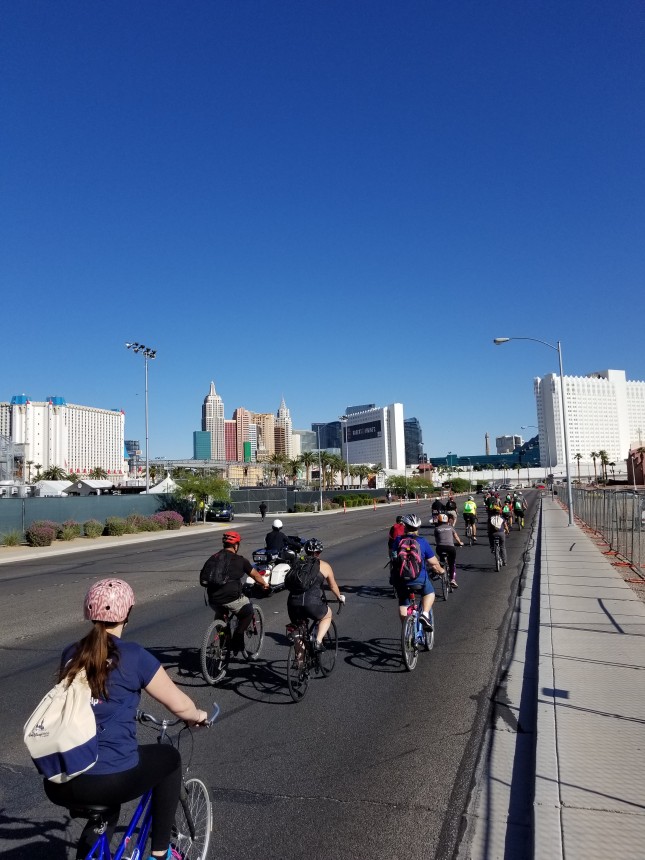 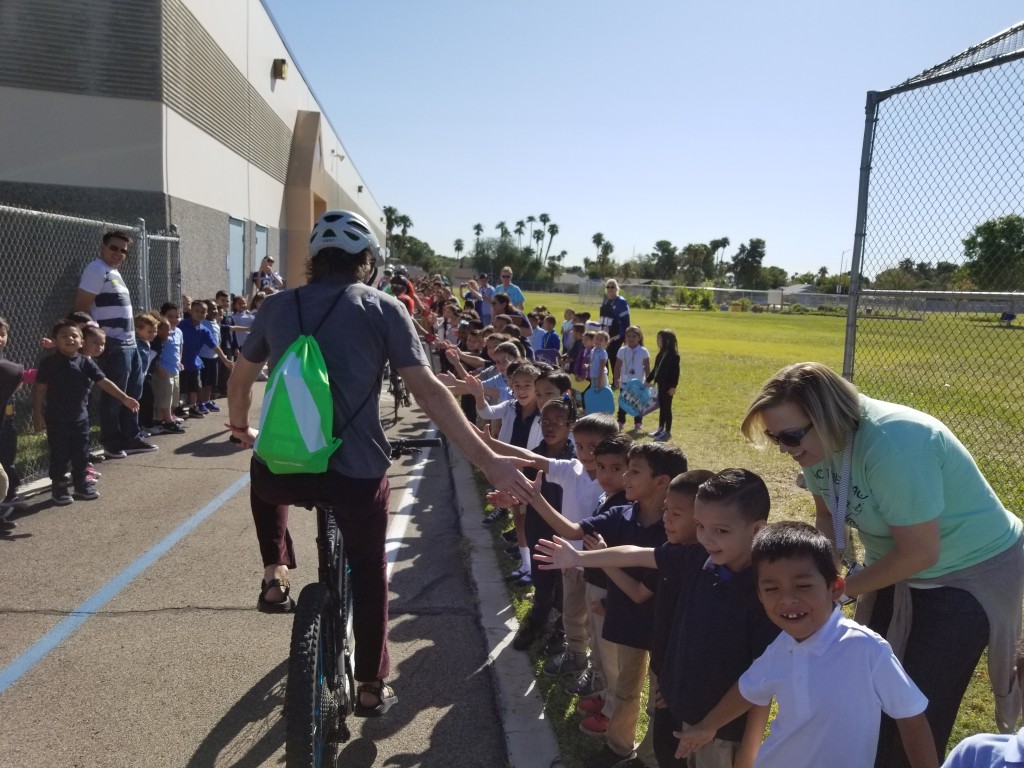 Long story short: If you are having a bad time at Interbike, you ain’t trying. I already have some bad ideas for Reno next year. Who wants to party?