I’m not much for new and shiny. I mean that in the latest gadget fetish, newest model, next iPhone ball gargling kind of way. New bike/tire/shoe/whatever day is still a great day for me. But in a more practical sense. “Fuck yeah, finally I get to buy new Giro commuter shoes because the plastic is showing in the heel of my current pair.”

I don’t care for concept restaurants. Nor spartan races, Rock n’ Roll Marathons, or CrossFitty crap. Not much for trendy cocktails; though I do like my gin. No Garmin on my bars or shits to give about Strava. In general gimmicky stuff. That’s not to say those all shouldn’t exist, but they’re not for me.

I do however like authenticity. In any form really. A good dive bar of course. Or a long ass ride with one or two good friends with no phone service. An old school steakhouse type joint where you enter through the kitchen Goodfellas style. You don’t meet crusty old guys with stories to tell in concept restaurants.

The same extends to bike events. Grassroots, if you will. Organic even. Whatever beatnik adjective you’d like. Races and events that are hosted by a local community and exist to expose others to their trails and support their cause. Or to simply have fun. Those are the kind of experiences that really get me off. Some examples:

I’ve talked about this before, but in Tempe we have STP. A weekly short track race that runs through our unfathomably hot Arizona summers. The idea being that summer is when we need the most motivation to ride. So we do it with friends who will tease you for not showing up. It’s been going on with varying levels of participation for 14 years now. Everyone chips in on beer, we pick a loop, race in circles for a little bit, then we go terrorize a local pizza joint that has $1 PBR’s. #thereisnowrongbeer  Underground. Free to “race”. Have an idea for a loop? Fuck yeah what ya got? 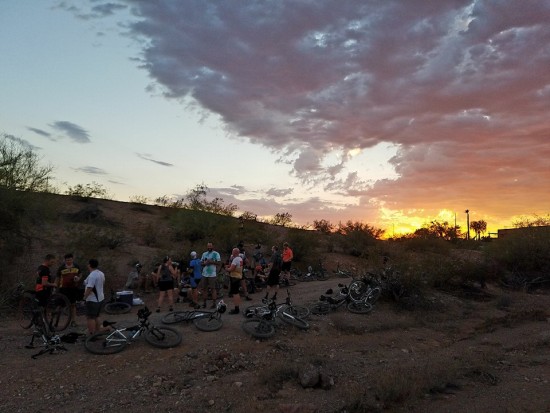 On a bigger scale, I recently raced an event here in Arizona that takes place up on the Mogollon Rim (mo-GHEE-on). It’s a heavily forested area to the northeast of Phoenix at the base of the Colorado Plateau, that is always at an extremely high risk of wildfire. There’s some beautiful views and killer trails. It’s not widely known as a mountain biking destination but that’s what makes this special. It’s appropriately named Fire on the Rim and the proceeds go to support the local fire prevention organization.

It’s staged behind a brewery that naturally pours beer all weekend. Free camping behind some stables. Friday night pasta dinner hosted by local grandmothers inside a barn. All of the course marshals and volunteers are from the community. And they stayed out there until the last goddamn rider was off the course. Live music all afternoon on a hand built stage next to a horse corral. Naturally there’s a silent auction with gift baskets and homemade yard decorations. It’s the quaintest shit you’ve ever seen. It’s fantastic because it’s not on a race circuit. There’s no USAC day license bullshit. Just a community that wanted to support their own cause and show off their trail system in the process.

I bring all of this up because I don’t think there’s enough of these kind of experiences. I’ve had many a discussion with other riders and heard “Man, I wish we had more races like that where I live.” Or similarly, “I would do that race if it wasn’t so serious/expensive/big.” Insert other detrimental factor of your choice. It’s easy to get distracted by the shiny advert posters, big name sponsors, and USAC season calendars. And those events are fun, don’t get me wrong. They often draw a big party and are well organized with name brand trails. But rarely do I walk away feeling more connected to anyone or anything afterwards. More just that I was there, because I felt I was supposed to be.

Social media, despite all of its ironically disconnecting influences, makes it incredibly easy to inform people in your circle. And also those a couple degrees of separation away. Therefore if you’ve had an idea for an event of some kind, just fucking do it! Go out and create something fun. You don’t need much. Some paper plates for old school numbering. Strips of pink ribbon tied to clothes pins make for easy course markers. Clipboard and a pen for timekeeping. Cooler for juice boxes, orange slices, and beer at the finish. Hit up a Goodwill or the sale bin at your LBS for some prizes. Beer permits are like $12. Ask a local brewpub if they can offer a drink special for the group for an after party. Cover the basics then tell your friends. And their friends. They’ll chip in $10 each. Start a phone tree if you need to. Next time more people will show. And there will be more beer money. Soon you will have a small following asking when the next one is.

And if you’re lucky enough to have some unsanctioned amateur races in your area, make sure you show up to that shit. Participate. That’s all you have to do. Be there. Create by numbers. Volunteer an extra set of arms. The more people who show to something gets the ball rolling. And keeps it rolling. That’s how word of mouth works ya know. In the Southwest the Arizona and New Mexico Endurance Series are absolutely on point. The Upper Midwest is full of goofy party races. GnomeFest helped rebuild a burned down trail center chalet. Keep an eye on the Surly blog for consistent reports on bad idea rides that might spark your imagination. Homie Fall Fest has been going on for like 18 years. And of course any single speed event is going to come along with your usual mix of senselessly hard and steep trails, too much booze, and general horseplay.

It doesn’t matter how small. If you find yourself wishing you had something, then create it. Participate in others’ creations. Be a part of that community and grow it. Be unsanctioned as fuck.