This story comes to you from Callum, an acquaintance of mine in Tasmania. I met Callum last year at a pub in Woodend, Australia; a small town outside Melbourne. We were there for SingleSpeed World Championships. Over the course of the weekend Callum told me of the Bottles and Chains crew he runs with on the other island down under. Bikes and beers for the fuck of it. We like that style.

Recently over on the facepage Callum posted a short story about the most glorious bike sale. Everyone of us has some shit story about Craigslist, or a low balling bike swap asshole. But this one is different. Good news in a sea of internet fuckery. One of new friends, shared beers, and passing a loved bike on to the next stage of its life. One that deserved to be shared with the masses. So I asked Callum to regale us with a full telling of the encounter.

Originally, I bought the bike from a Frenchman visiting Tasmania who was selling it to get a little extra cash to get home after his visa ran out. The guy was on a really tight deadline and needed the bike gone the same day I looked at it, the problem was I wasn’t going to have all the money until the following day. With his flights booked for the next morning he really couldn’t wait the extra day to offload the bike but we must have formed a trusting, bike loving bond that day because he left the bike with me after I promised to pay him the next day. If I had wanted to I could have taken this bike and never seen this guy again, but I gave him my word I would pay him and there was no way I was going to break his trust.

When it came time for me to part ways with the bike it seemed right to treat the sale with the same trust I had received when I bought it. This is where Dan comes into the mix. Dan had sent me a message several weeks after I listed the bike online for sale and expressed to me how he had fallen in love when the purple Cannondale CAAD 3 and he asked how I would feel about posting it over to him. At this point it’s worth noting that Tasmania is an island just below the mainland of Australia and when it comes to posting large items over to the ‘big island’ there are very few affordable choices available. I told Dan simply that I would post the bike anywhere it needed to go but that if he had really fallen in love with the bike that much and was willing to spend a quarter of the asking price just to ship it over then the best thing he could do was book a flight and come to me. On a good day you can book a round trip from Melbourne to Tasmania for around about $60. I told Dan that if he did choose to come over I’d pick him up, take him for a ride around the mountain that sits in my state’s capital and then help pack up his new bike and deliver him back to the airport. I really didn’t think that he would take me up on it but, for the second time, the bike brought out the trust in both of us because less than an hour later I had another call from Dan telling me he was on the way over in a weeks’ time.

I knew nothing about Dan before he arrived other than he was into bikes so when I was getting ready to drive out and pick him up my partner told me that there was a chance that he could be an axe murdering bike thief and that I needed to tell her where we were going and to be careful. However, when I first met Dan I knew that wasn’t the case, he didn’t have an axe for a start, he was relaxed and talkative and really excited to go exploring around Hobart. He brought along a bag of mini snickers bars with him, which he offered to me when he said he was hungry after his early flight, so I made the decision that before we went riding it was probably best to go and get a burrito and a coffee.

Thirty minutes in the car flew by while we chatted about what we each did for work and why riding bikes is so sick which meant we were soon in the centre of town. Dan threw his leg over the bike for the first time and went for a short spin around the carpark, when he got back to the car we discussed how absolutely awesome the bike was for its age, when a lady came walking towards us wanting to get in her car which we were blocking. The bikes’ trusting ways got this lady to stop and say how cool purple is for a frame colour, at which point her and Dan starting chatting about what he was doing here with me and the purple bike. They talked about all the good qualities of the bike and how cool it was that he had come all the way over to Tasmania just to buy a bike and go on an adventure. I couldn’t have planned the encounter any better and if I thought Dan was on the fence about buying the bike I didn’t doubt it any longer. He asked me if I knew the lady and if I had gotten her to meet us there so she could big note me and the bike to help with the sale, I didn’t and he was more amazed at how nice everyone he had dealt was so far.

Burritos were the next thing on the agenda and I was thankful for it because I was honestly pretty hungry and worried that if I didn’t have anything to eat before we went riding then I would be left in the dust. We ate as we walked back to the car and discussed where we were going to go riding; Dan wanted to go to the summit of Mt Wellington. It was an overcast day and the forecast was for a years’ worth of rain that day but it was where he wanted to go so I figured “screw it” let’s go and see what happens (if he did turn out to be an axe murderer at least he would be too cold to bother swinging). Tasmania is a relatively dry state but we are prone to getting four seasons in an afternoon and then another four that same evening so going up to the summit of Mt Wellington can be risky. 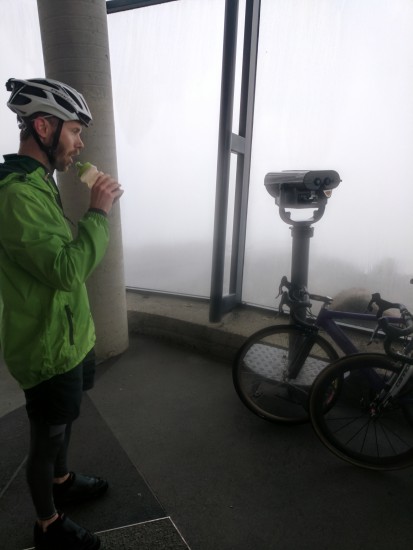 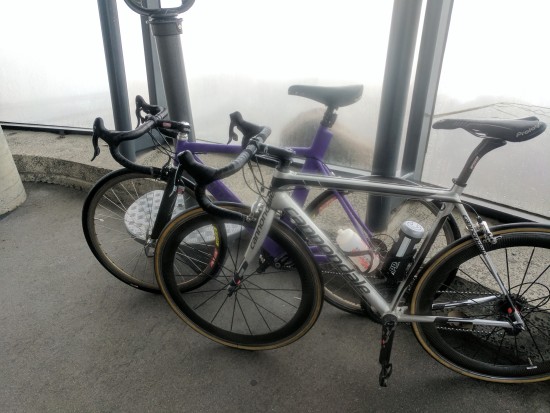 We started riding from the base of the mountain so we had about 10km of climbing ahead of us, for the most part the weather held steady with misty rain and manageable cold. The ride went really well; we met a few runners coming back down from the summit shouting encouraging words and sarcastically letting us know how much further we had to go, but the kilometres flew by as Dan and I continued to chat. Our conversation flowed along without effort and evolved from bikes to work, love life, favourite drinks, best and worst cycling experiences, and on and on until suddenly we were at the 1km to go marker. When we got to the summit we took some shelter in the lookout that normally has an uninterrupted view of Hobart and everything surrounding it, but on that day we couldn’t see a damn thing. The absent view didn’t seem to bother Dan at all and after we got a few photos at the top we got back on our bikes and started back down. The ride back down was pretty uneventful aside from catching back up to the runners we met earlier and shouting some encouragement of our own and ripping some skids so Dan could find out the point where the brakes locked up. It felt like an excuse to pull a few downhill skids to me but I’m a big fan of skids so I obviously joined in, for camaraderie. 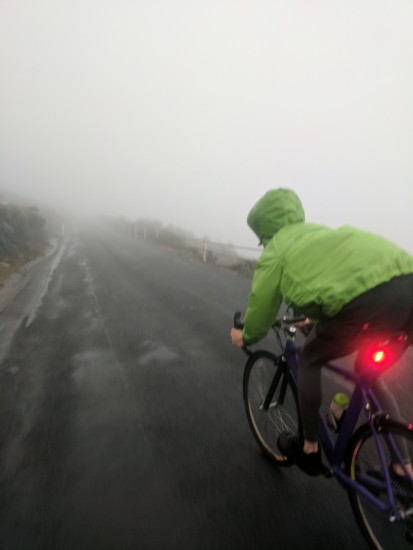 We got back to the car and started getting changed when a friend of mine (Ash) that lives nearby pulled up and gave me some tires that I’d bought off him but hadn’t collected yet. It was just by chance that he’d seen us there when he was driving past and he asked if we wanted to come around and have a few beers while we pulled the bike apart and boxed it up. Dan was absolutely keen for a beer; the ride was thirsty work and it would be irresponsible not to rehydrate promptly. Ash and his partner Emily had the fire cranking at their place and plenty of cold beers in the fridge. Not long after we got settled into a drink Emily brought down a plate of snacks and some old blankets they were throwing away so Dan could pad out the box. This was another great encounter in a long line of encounters that meant Dan quickly formed the opinion that everyone in Tasmania must have a heart of solid gold. I feel like this bike had become a focal point for good times to everyone who had contact with it, I had some really good times riding that bike and I like to think the Frenchman who had it before me did too.

It was getting late into the afternoon when we finally finished packing the bike. We didn’t see the point even bothering to take on such a task without a few safety beers, and you can never be too safe. We thanked Ash and Emily for the fire, beer, and blankets and got back in the car to leave, but I had a dinner I had to get to and I was out of time to get Dan all the way back to the airport so I dropped him at a nearby pub where he waited for a ride. I’ve sold a few bikes in my time as a rider and they always go the same way; you turn up with cash money and leave 10 minutes later with a bike, normally to never hear from that person ever again. This, however, was the best bike sale I’ve ever done, and we got along so well that I even forgot to let my partner know where we were going (she wasn’t pleased). Dan and I have stayed in touch ever since and I hope that the bike brings Dan as much joy as it brought me (if his trip was any indication, I reckon it will). 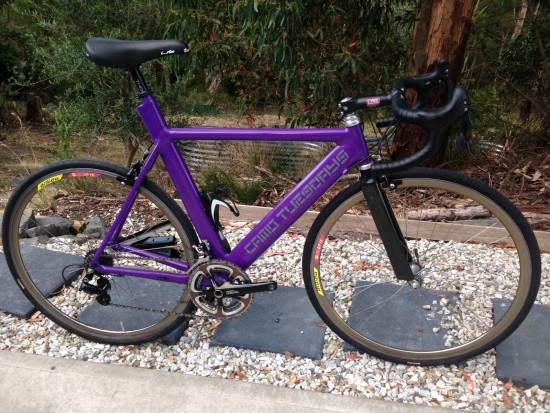 Never underestimate the power of a bright purple bike.

6 thoughts on “The Bike Sale”