The Burning Man of bicycles. OP. #24hop. Old El Pablo. The big one. 24 Hour Town. It’s been called a lot of names. It’s the largest event of its kind in the USA, top three in the world. 1,850 riders this year and sold out in 37 hours. Easily 5,000 people will arrive in camp. And it means something different to everyone that’s ever been. Like a good mushroom trip when the music is just right and everyone is in sync, you kind of just smile and nod with a giggle.

Next week’s edition will mark my 13th year in attendance. Some as a volunteer, some as a racer, some as a party facilitator. All roles are equally important. None exist without the other. I stumbled upon the event as a freshman in college looking for a way to get service hours for a “scholarship”. Sadow signed my whole semester’s worth in a single weekend. Until then I didn’t know you could race bikes and party simultaneously. I credit this event with sending me down a path that has introduced me to some of the best people I have the pleasure of calling friends. So come join us why don’t you? The following is our guide to enjoying all the 18th annual Old Pueblo has to offer, and your invite to the seedy underbelly that lives between the lines of the official event pamphlet.

Sunset Cocktail Party ~ Friday @ the Whiskey Tree
First and foremost, make sure you’re at this one. DC and your best friends at Oskar Blues Brewing are throwing our 4th Annual Old Pueblo Sunset Happy Hour Heckling Party. Be sure to familiarize yourself with the location of the Whiskey Tree. Just ask around, it’s on course and fairly close to the expo. This edition won’t feature our Cat. 6 National Title Race, but it will showcase the weirdest and strangest Old Pueblo has to offer. We recommend proper evening attire for this gathering. e.g. sport coats, bikinis, animal costumes, bolo ties, chaps, leisure suits, pasties, etc. 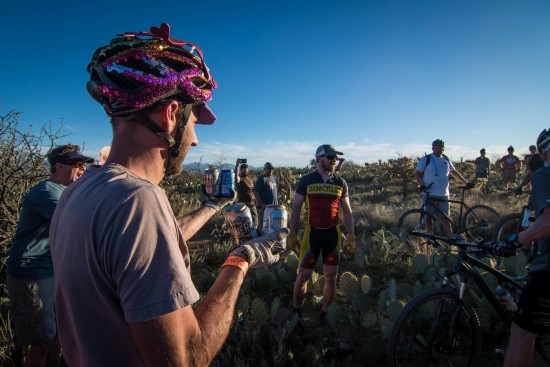 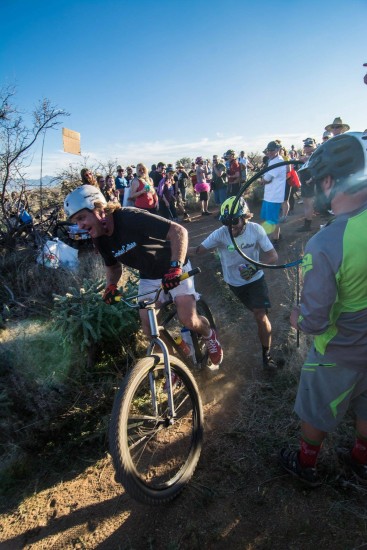 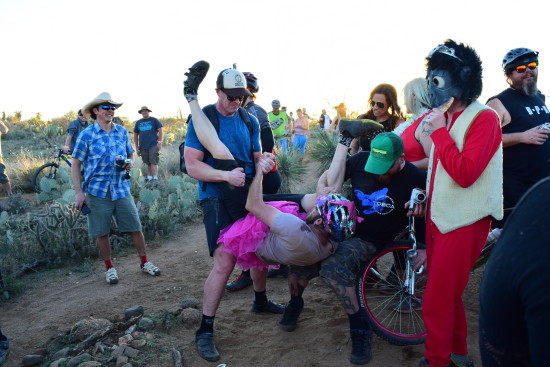 Club Ride Log Pull ~ 8:30p Friday in the Expo
Log Pull feats of strength. In the Expo. Sponsored by Club Ride. Get it? And so conveniently scheduled for right after our Whiskey Tree cocktail party.

Strategy – Race vs. Party
Are you here to be serious or are you here to have fun? If you have a rock solid plan either way, then stick to it. But balancing work and play can be surprisingly difficult here. Say you’re on a 4-person team and you get your first two laps in by 9pm. Campfire, a hot meal, stocked cooler; kind of seals the deal right? Experience says that if you’re not 1000% set on a game plan, let the laps and beers fall as they may, and don’t regret the outcome for a second. There’s always the coveted sunrise lap. 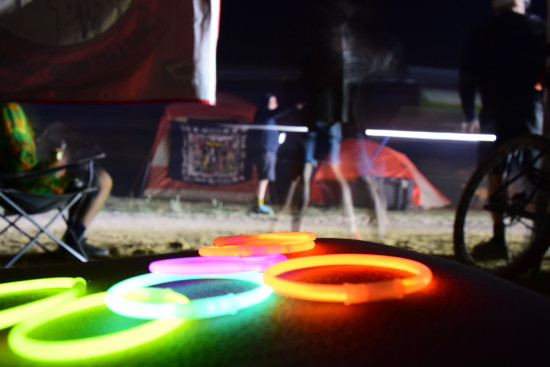 Racing duo is the hardest combo
It my seem counterintuitive but it’s true. Solo you can roll your own speed 24/7. 4-person or more you’ve got at least 3 hours to swap clothes, eat, drink beer, etc. Racing duo you’re constantly preparing. 10 minutes to camp, hour to refresh, 10 minutes back to the exchange tent; and you’re on stage again. Dropping two laps in a row is a decent idea. Gives you more time to settle into both phases. Just be aware that your partner might have tripped and fallen on a buzz while you were out. 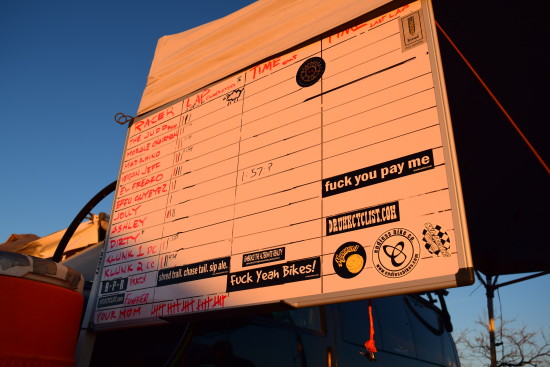 Don’t expect to find a campsite on Saturday
Every year without fail some jackass tries to drive their RV or vastly ill-equipped station wagon into the depths of camp about an hour before the start. Don’t be this guy. Beer and obscenities will be tossed in your direction. If you find yourself thinking “Wow, how come nobody else is camped here already?” There’s probably a damn good reason. Or alternatively “Shit, this looks like it’ll be a bitch to get out of.” Then don’t fucking bother. 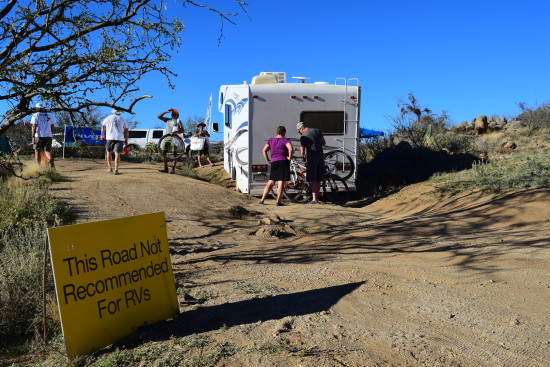 The Start
Riding the first lap involves a roughly 1/3 mile run to your bike. Pro tip: just walk. There’s no open container laws here. And the first lap is a gong show anyway. Even though it’s an augmented lap, after about 3 miles you’ll be dumped on to the singletrack cactus garden. Someone WILL crash. There WILL be a massive logjam. So take it easy! The fine folks at Catalina Brewing are always posted up on the right side of the run. Swing in for a beer and enjoy the walk to your bike. There’s often a clown and maybe some topless chicks along the route.

Whiskey Tree Treats
This race is usually held on or near Valentine’s Day. And for the most part nobody gives a shit. But, in the wee hours of Saturday night into Sunday morning, the Whiskey Tree is turned into a garden of love. Shooters hanging from the tree, chocolates on the stump, and a bottle of Crown in the sand. Sometimes a gnome to guard the garden. The Gnome of Love. Often courtesy of the SDMB. If a desert sunrise and a shot of Crown doesn’t tickle your fancy then go the fuck home. 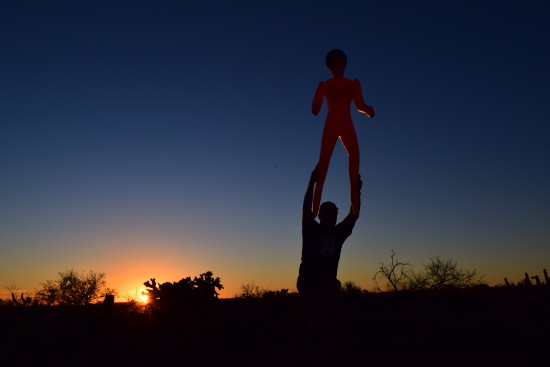 Rock Drop Sunday
One of the rules of 24HoP is that you have to finish AFTER 12p Sunday. If you start a lap before 12p, you must finish or else be DQ’d. The result is a mad dash of fast teams trying to squeeze in one last turn. And also a pileup of others stalling in order to roll through after 12p and avoid sure shame. All of which leads to a drunken spectacle on the rock drop that leads into the exchange tent. It’s a semi-easy feature, but when 500+ people are shouting and throwing beer on you, well, shit happens. This is the place to be to close out the weekend. 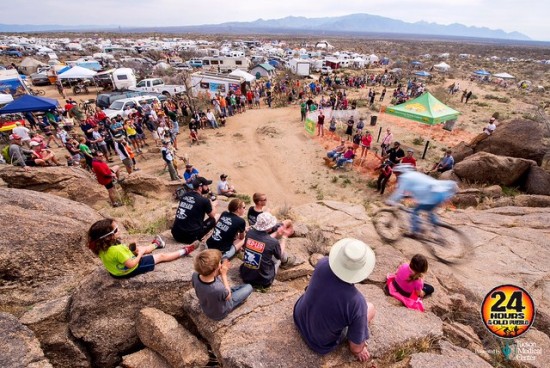 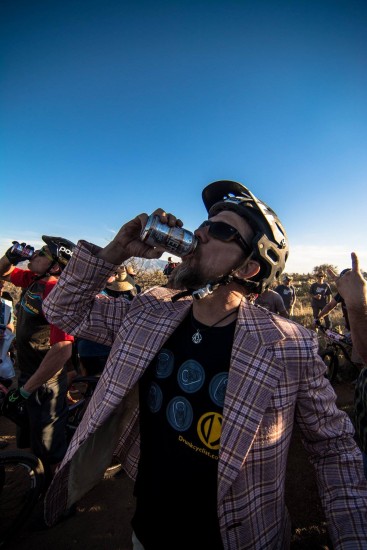 Thank your volunteers
This goes without saying but I will anyway. In short, don’t be a dick. To anyone. There’s enough type A Strava assholes out there already. Anytime someone who is not racing does something to help you, acknowledge that shit. At any event. They aren’t getting paid. Time keeper can’t find your team page in less than 3 seconds? Cut them some slack. Years ago I watched Sadow DQ a team for berating a volunteer. They also like beer, and candy, and hot chocolate. Bring them treats when you exchange laps at 2am.

So there it is. Your formal invitation to the shitshow. No save the date or RSVP here, just word of mouth and a bottle of whiskey. We’ll see you at the Tree…