My office Holiday party was last night. Many of you are probably going to one soon if you haven’t already. Maybe it’s tonight even. What a treat! Now, I don’t hate my work friends. But I call them work friends for a reason. I get paid to spend time with them. If they were regular friends I’d see them spontaneously outside of our scheduled, paid time together. They’re good people and I enjoy being paid to spend time with them, but I don’t often share much of “whatever it is that I do outside of work” with them. I’m sure you can relate.

This year I didn’t have much of an excuse not to go, and the vice president types spent their own money putting it together so I figured I’d make an appearance despite my general inclination. They sent us home early allowing for time to get ready. read: pre-game  On my way home it occurred to me that I could get to the party by riding the canal path for about 90% of the trip. This would allow me to avoid under consumption in order to drive home, or the need to request a Lyft after appropriate consumption. More importantly, it afforded me some pedaly time before social hour.

I pulled out the bike, stuffed a sweater and jacket into the panniers, and made for the liquor store. A few miles into the trip there’s a nice pyramid/tomb thing that overlooks town and the zoo. Perfect venue for a stove pipe of Dale’s and proper headset adjustment before engaging the extended work friend circle. 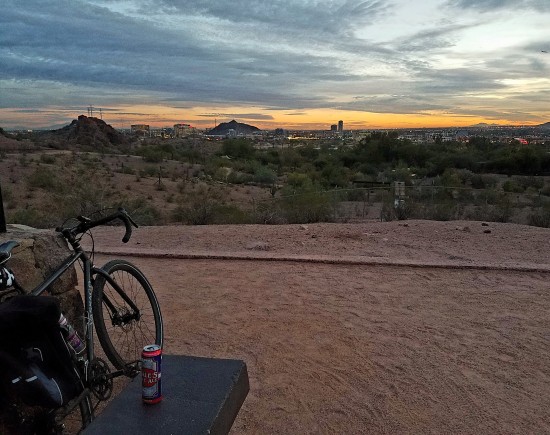 Upon arrival I coincidentally rolled past my bossman’s boss who was handing his keys to the valet. He remarked about how “crazy” I was for riding the 8.3 miles from home. I expected this. 8.3 miles is crazy for some people. But he noted that it’s a nice night for being outside and went about his way. What I did not expect were some of the more specific, yet innocent, comments from people I don’t know quite as well.

I know well enough that these questions come from a place of ignorance. It’s not a bad thing, they just don’t know. No harm done. Though I couldn’t help but feel as if I had somehow outed myself. Them wondering what other wild and crazy things I must do if I’m wacky enough to ride to the office party. I hope it’s some weird shit too.

Thankfully though my core team is pretty solid and we soon took the cool kid party to the dive bar down the street. A couple drinks more and then I rode home in the rain. A decently good time. One of those events that’s easy to rag on but usually ends up being kinda fun. And no strange looks today, not yet anyway.

Good luck to you on making the best of your office party season!