I first met Dr Jimi while standing next to a barrel of sake at a singlespeed party in Japan. I knew instantly that he was one of us. The positive vibes just radiate off this guy and he can party (and ride) with the best of them. The picture below kinda sums it up. Party. 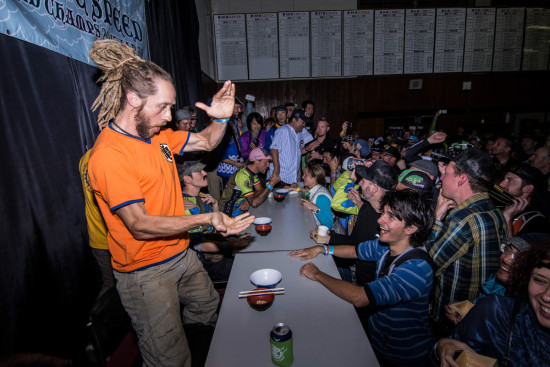 The fine Doctor lives in Cairns, Australia, a place that I have always wanted to ride since I was a little grom. I distinctly remember a teenage me pouring over all of the articles about the 1996 worlds when Palmer almost got the rainbow jersey from Vouilloz. The stuff legends were made of… So when Jimi told me that he would be attending this year’s edition of the Wold Cup there, I called him in to action. Sure, the mainstream media coverage of the event is pretty good, but I wanted to know from a fan’s (and local’s) perspective. I can’t understand what he is talking about half the time, but reading this Aussie slang is fun and he sent over some great photos. Thanks, Dr. Jimi!

Goorie Drunk Cyclist,
Between Jagermeister & Beer there is no winner and no loser. Its an equal life Happy.
So after 5 weeks (?) of randomness and adventure, countless slabs of cold golden neck charmer, a few litres of Jager, something resembling a work environment, a few hundred km’s on the G-Spot, more on some other treadly, 22 sets of chaffed arse cheeks, a visit from IMBA Sensei 1, a fuckin’ awesome set of double pluggas and the unfortunate silencing of a Rider that was more than just a Chainsaw.
Here is your report on the recent World Cup in Cairns, Australia. Brought to you by the Universe and a somewhat backwards perspective from behind the scenes and out in the crowds.
In 2014 due to a small amount of heavy rain before and during the racing, the trails looked like a mud-wrestling festival minus the bikinis.
This time round here may have been a few thinkin’ the same was about to happen again. Although we had a bit of rain during practice and qualifying, when it came race day, everything was lookin’ good. And the World was turning as it should.
This is Far North Queensland. It’s different to the rest of this Island. Tropical rainforest, The Ocean, waterfalls, swamp-balls & the Great Bleached Barrier Reef.  Up here special things are needed. Ingenious ways to remain freshly intoxicated. How to keep your beer cold in other ways than drinking it all before it gets warm. How to avoid turning into a drunken yob after a litre of Bundy Rum. The jungle here has special “treats” for those unawares. Woe the one who vears foul of the trail. Gympy Gympy gunna get you!
This area has a proud history of bicycles, Uncle Llew recently pointed out some old film footage of plenty of riders back in the 40’s gettin round in dresses and suits, no helmets, no agro dickhead drivers, Everyting Irie!

So when the World Cup arrives, there are a dedicated bunch of locals who well have been around since the 40’s or when we had a couple of World Cup rounds and a World Championship during the 90’s. Some may have been just kids at that time. These people make the World Cup in Cairns. Whether they be one of the hundreds of keen volunteers who spend many long hours setting it all up, the school mates of local hopefuls headin’ up to the Rock Garden with bells and whistles or the devoted pisshead carrying his esky up to the Cyclone to catch some mayhem. Without these people, this race would be impossible, the Jungle would be silent.

Nevertheless, the Riders rode. Some rode exceptionally well, some not so well, some ate some serious shit. But they all got out there and had a crack.Can’t take that away from ’em.

At the end of the DH day, Rachael Atherton had beaten local Tracey Hannah in the Ladies event. And Loic Bruni had just stayed in front of 2 crowd favourites, Aussies Troy Brosnan & Mick Hannah.

Sunday morning came with a cool breeze and a cooler beer. Alas, it was Jager day! No work for Dr’s or Mechanics that won’t grow fro’s today.The whole clan headed to the bar.
The Bar was perfectly positioned close by the Start/Finish area, big screens all round, a mechanical bull for the grommets, and plenty of beer. These guys thought of everything. Suddenly there were heaps of Ladies in lycra lining up. Allah, had we died and gone to heaven…?
No. Fuck, that’s right. Its XC day!

A few beers and a number of laps later, the Lady Viking Annika Longvad came flying home with a Sven’s helmet removing stealth hold atop of her stancheons, a Swiss freight train steaming in from behind and 50 secs back a crowd favourite, Aussie Reecca Hendersen came in for a visit to the podium.

By the time the men’s XC something was on, the IMBA head coach, the Mechanic, the Shimano Drivetrain, a couple of Mulally’s, the kids & I were headed up to the Crocslide/Jacob’s Ladder area of the course where the barby was being run by Captain Flaps & Lady Flaps with solid steel work by Rumble. The snags were gettin’ thrown on the searing hotplate quicker than those lycra monkeys could lap around again.
At this point, and seeing that our 4 Shimano designers had drifted from concentration, being the only Dr around I decided it was time to medicate some of the masses. So after a quick shot or 3 of self-medication (to make sure to be in correct frame of mind) . Icy cold herbal liquid from the green bottle was readily administered. Some well earned, some “in the knick of time needed”, some for them, some for him, some for the off-duty Firey, some for her.., ooh fuck yea, give her 2, Neko and his Brother were big fans of the Drunk Cyclist so they got a few too! , “How about you Officer? Some for you?”
It really is better to give than to receive.
Copious beers and a litre of Jager downed and apparently some man-machine Swiss bloke had scampered home in front of 2 flying Frenchmen.
XC Race over.
Jager Finished, no cold beer.
Cold beer at home…. Hey, where’s my bike?
Fuck,… where are the kids…?

**I know it happened way back in April, but better late than never.