Oh give me land, lots of land, under starry skies above. Don’t fence me in. Let me ride thru the wide open country that I love…

This whole #bikepacking fad is a stayer. I like it enough to practice a lot; you know, the overnight quick trips after work that allow you to cram an adventure into your normal life often enough that you can feel good about your lot. We can’t all access the helicopter. Then I get a swell head, thinking I got it dialed- which is funny (ha ha) because nearly every time I blow it somehow…

This most recent go round, I took my sons along on what they know to be a long, hot climb to a camp site with a view. It’s totally worth it to me on it’s own merit because I enjoy climbing, it’s got a nearby spring which is clean enough to drink right from the basin, it’s very flat, there’s firewood (when that is appropriate) fairly close by, and the view is fantastic. It’s totally not worth it to them because suffering is not it’s own reward, and “there’s nothing to do.” I make them go, anyway. We’ve covered this. They’ll thank me later.

The older of my boys (16) invited a friend. For the reasons previously stated, this is a hard one to talk his buddies into, but we were a party of 4 this time. I rode a cargo bike and hauled all the gear. Well, I want it to suck as little as possible and I enjoy climbing so what’s another 3 people’s worth of food and gear if it makes it more palatable to my companions? The teens rode 26″ hardtails, while my youngest (11) pedaled a 24+. Let’s talk wheel sizes.

We arrived at the put in, I popped a top and set about rigging. Being the sole “competent” organizer is somewhat stressful, but I try* to keep my cool- I want them to learn how to do this stuff for themselves ultimately, but in the interim I want them to have a good time and not be overwhelmed with mundane tasks they find boring. It’s a balancing act. We rolled out with all of our stuff, feeling confidently optimistic. We had snacks, party drinks, and all the gear. We turned my favorite corner, and began. 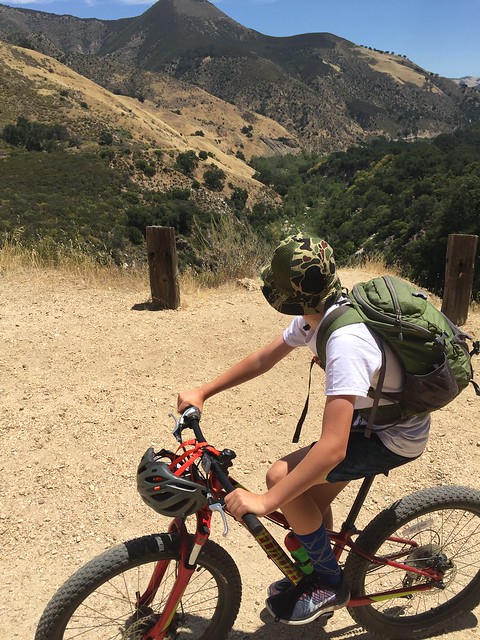 Riding a bicycle loaded for 4 is a weighty undertaking. I saw that sharp rock, all perfectly balanced with it’s blade to the hot sky, and I let the rear wheel ride right up onto it anyway. Handling? I guess. It’s a sad sound, that whoosh, as all the air comes out in a rush. I run presta valved tubes on that bike (yeah, yeah…it works around my neck of the woods) and I knew I had a spare because I’d checked when loading. So I cussed some, but it was no big whoop to lay it on over and pull the wheel and pop a top again and get to fixing the situation. I got a wrapper to boot the slice, and pulled out the spare. Only, the tube I’d witnessed turned out to be the 700c I’d packed last time on account of my wife’s bike, and the other tube was a schraeder 24+. Disappointed, but not alarmed (nor surprised), I pulled out the patch kit. Even though it was a slice, it was patchable. Only, the glue was almost completely dried up; just a gummy ooze. 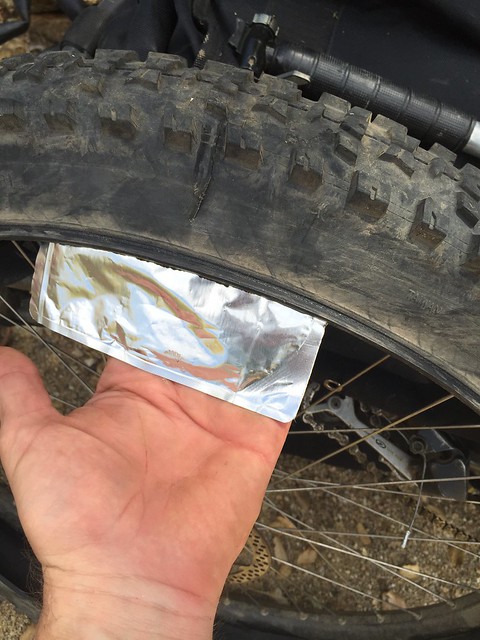 In light of the fact that the rear wheel on that bike was going to shoulder a heavy load, I decided to pull my older son’s front wheel and swap his good tube and tire into that position. Then I patched the slice as best I could, and put that assembly into his fork. I would have put the weak set-up in the rear, but clearance was an issue. The kids were hot and bored, so I sent them ahead while I assembled my bike and finished my tallboy. It didn’t take too long for me to round several corners and catch them, just long enough to begin to think that everything was cool. I sent the youngest and the friend to find shade up the trail, which would be some distance. Then I applied a new patch with the last of the gummy glue. I knew it wouldn’t hold. And it didn’t. 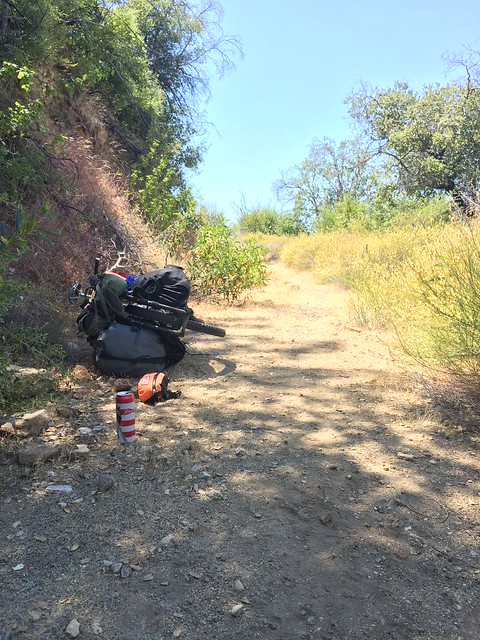 My youngest had the leatherman tool in his pack, and he was somewhere up the trail. I reckoned I could use the file to ream the presta-sized valve hole and jam the 24+ into the 26×2.4″ tire, but. We discussed options, my eldest son and I. Since his buddy was walking most of the time anyhow (not a rider), he wouldn’t be put out to hike without pushing a bike so we stashed the bike in the bushes and my son strode (not rode) up the trail to intercept the others. I’ve got a fork mounting bracket bolted to the tail end of the deck on the Big Dummy, so I figured I could tow the bike back down in the morning if worse came to worse. The little guy could ride on the deck, and my older son could coast down on the 24+. Looking for silver linings, you know. 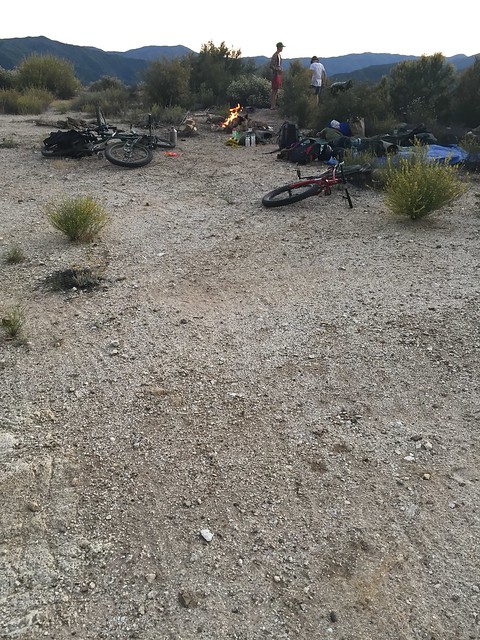 So we made it- got to camp, and did camp things: hiked to the secret swimming hole nobody knows about, lost my sunglasses, engaged in hand spun propeller toy contests, made dinner on the grill over the campfire, the boys had San Pellegrino blood orange sodas and I had whiskey which had been waiting under a bush, danced to the Backstreet Boys’ classic (don’t kid yourself), told stories, looked for shooting stars, watched the fire burn. 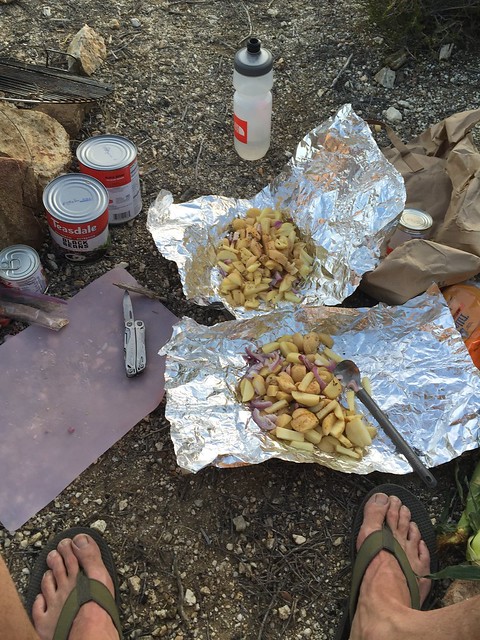 And in the morning, after sleeping with the stars as our ceiling (my favorite!), I awakened to face the fresh round of complications. 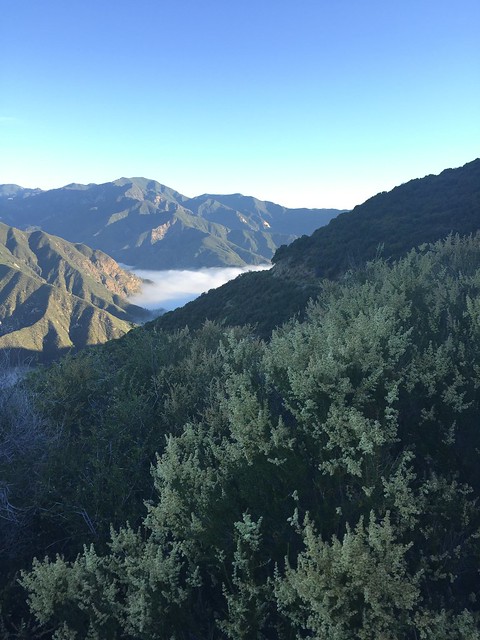 The friend drinks coffee, which was unexpected (he’s 16) so naturally I offered him my cup, having brought just the one. It was easy peasy to #wildharvest a double walled mug from a #locallysourced beer can. 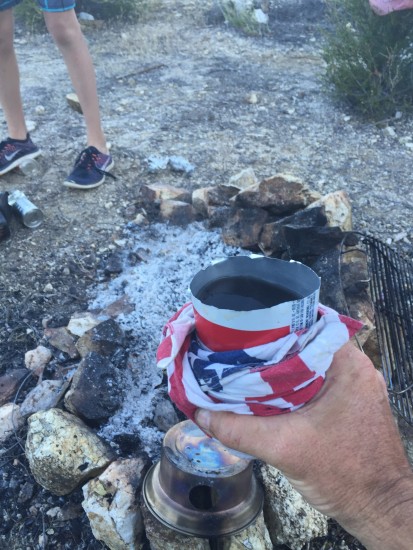 Of course I’d forgotten the handle for the Kelly Kettle, so I #bushcrafted a replacement from a sweaty American flag bandana, which I only charred a little bit. My #coffeeoutside filter is the finest other sweaty bandana. 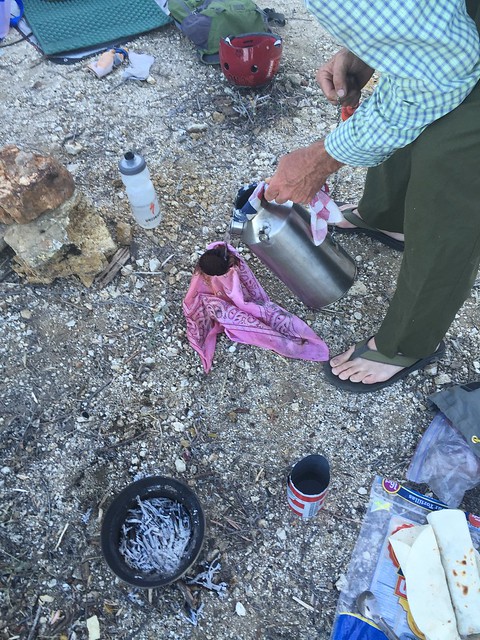 We broke camp. With the teens on bikes, and my youngest riding bitch on the deck of the Big Dummy, we rallied the descent to the stashed bike. Having the proper tool does help the repair process- it was straightforward reaming reaming checking reaming checking reaming until the valve hole was large enough, and the 24+ tube fit in the 26×2.4″ tire just fine. With all of us on our own rigs again, the bottom rushed up to meet us. We found ourselves at the swimming hole. 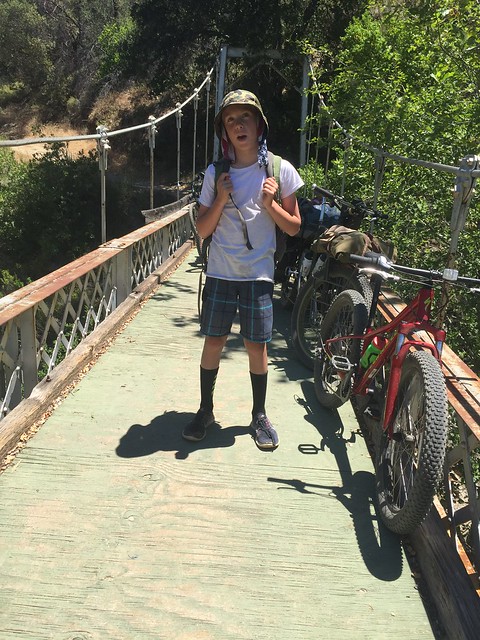 To which we promptly added the crucial element: the rope swang. 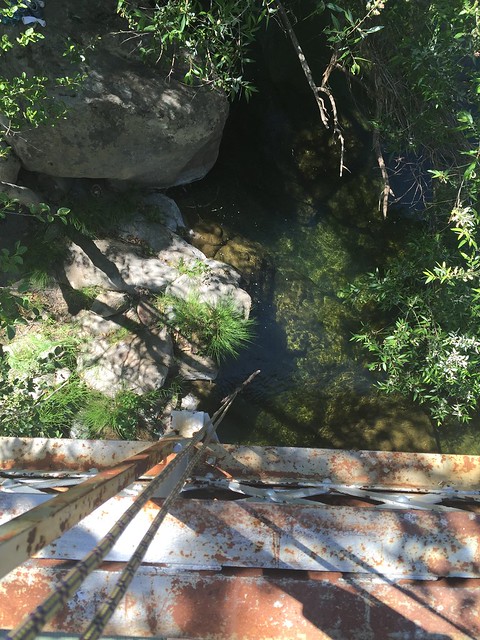 There is little better than riverside lounging. 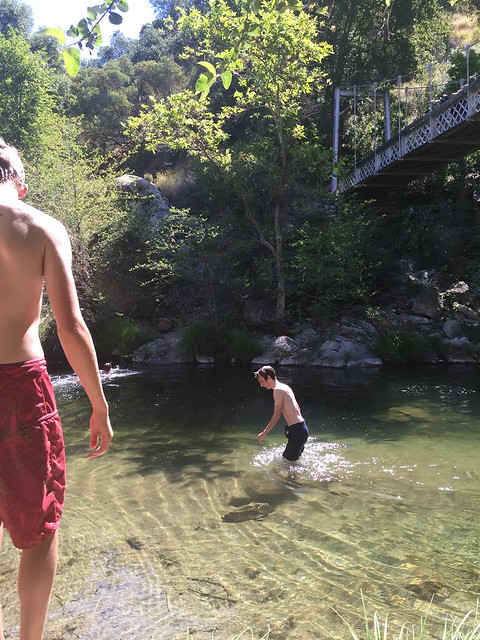 SUCCESS! So then I get to thinking that I’m an expert at adapting to ill circumstance- which is extra funny (ha ha) because it’s my mistakes that put me in those circumstances, but also extra extra funny (peculiar) because it’s so gratifying to blow it and still pull it off. Maybe more so than if it had all been textbook. Anyhow. You can’t fix stupid, but you can learn to work with it.

*I try to keep my cool, but I do yell some. You think I got this nickname on accident?

3 thoughts on “So ready for whatever”