So there I was in Houston’s Hobby airport, drinking a beer that the bartender had just bought for me. The shitfaced woman previously sitting on the adjacent stool was curious about my cycling helmet and reached for it, spilling her beer all over my bag. Bartender bought my round and was now inquiring about where I was going with that helmet. And once again I found myself explaining that some drunkenly tossed darts had lead me and a couple friends to Corpus Christi.

Admittedly, Corpus Christi was not at the top of (or even on) my list of places I had hoped to end up. I assured myself we’d land somewhere like Savannah, GA; Portland, ME; or Sun Valley, ID. But the point of this exercise is to illustrate the fact that all you really need for a good time anywhere is two wheels and some friends. You can dump us in any random ass town and we’ll bring the party. And to that point, I don’t think it gets much more random than Corpus. So off we went.

Chewey had flown down from Minnesota and rendezvoused with Kerry Coldhands in Austin a couple days prior. They then drove down to Corpus and met me on a Friday afternoon. Snagged me from the airport and aimed for the closest bar with all deliberate speed. This happened to Lou’s Saloon in a rather industrial part of town. And goddamn if it wasn’t the best place to start. This is a locals’ bar, and having never seen us before our lovely bartender Sharon supplied beers and immediately needed our story. Apparently not many people throw darts at a map and then wander into her bar. We were told to take a wander downstairs where there’s another bar. We passed a sweet grandmotherly woman while heading toward the stairs who whispered; “There’s a bunch of old Playboy covers on the walls down there, see if you can guess which one is Sharon!”

A month or so earlier I had emailed a couple shops in Corpus to inquire about their scene, routes, hole-in-the-walls, etc. Almost immediately I received a very enthusiastic response from Trevor with Bay Area Bicycles. We exchanged emails about the best routes, bars, and other happenings in the area. Turns out they host a small local race every Monday evening, the M.E.S.S or Monday Evening Street Sprint. A quarter mile sprint along the waterfront. Next to a bar. It sounded very much like Short Track Papago that we have here in Phoenix. Trouble was we weren’t going to be there Monday night. Not to worry. Their shop moved that week’s race to Friday evening so we could attend. These guys are alright. 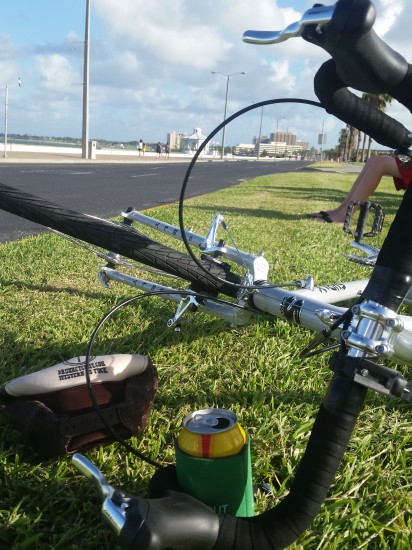 The M.E.S.S. is a simple format. There’s two groups; road bikes and mountain/cruisers. The top few from each heat move on to the next round and race again. 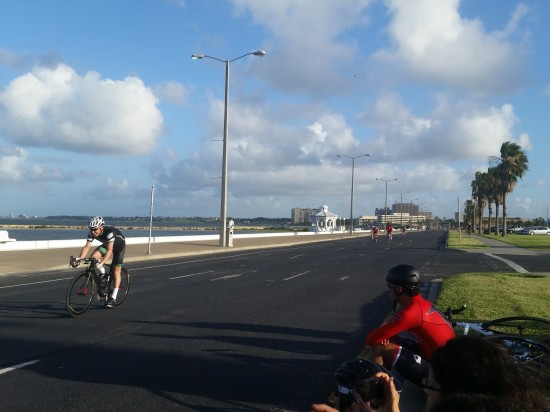 The three of us were on singlespeeds and thus didn’t last very long. No match for the big gears and fixie kids. It was an awesome gathering. Traffic free waterfront lanes. Big grassy park. Cooler of Lone Star. We shot the shit with the owner of the shop, talked about their group rides, and what the desert heat and Sedona are like. If you’re ever in Corpus on a Monday, go check it out.

From there the group took it upon themselves to show us around town. Read: attempt to drink us under the table. Normally that would be a tough task with our steeled trio. However they put a good hurt on us. A solid pub crawl rolling 10 deep on bikes. Someone may have fallen asleep in the grass outside the last bar. But in their defense, he had been awake since 4am traveling and had already done some work that day. 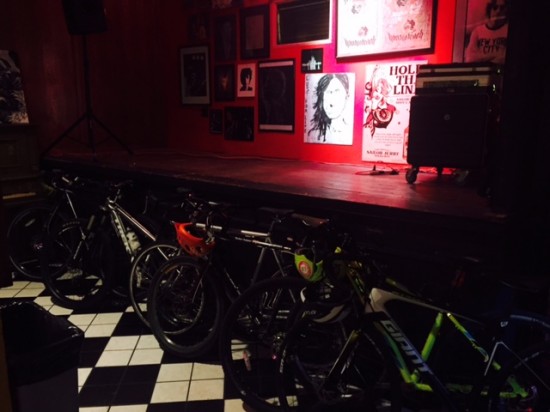 The next morning we loaded up with a few overnight essentials and hit the road. This is where the real experiment began. We opted to ride clockwise around the bay towards Portland and then on to the beach at Port Aransas. Leaving Corpus we had to finagle our way over the Harbor Bridge. I say this because it’s rather sketchy with traffic and certainly no bike lane to be had. There’s a minuscule walkway along the edge; maybe two feet wide at best. Which doesn’t have much railing and it’s well over 200 feet high. Either way it’s mildly terrifying. I chose to blast over in the traffic lane to get it over with while Kerry and Chewey opted for the narrow walkway. On the other side I waited for them in the grass alongside the exit ramp. A state trooper pulls up to me and rolls his window down. The following exchange told me all I needed to know about being a cyclist in Corpus.

Things calmed down a bit on the far side of the causeway where the shoulder widened and dumped us off on to a wetland path. It was a nice reprieve from the traffic and lead us a few miles into Portland.

From here we were able to sneak our way through mostly on backroads and in neighborhoods. Occasionally coming across fun places to have a beer.

And made damn sure we took every opportunity to join the locals in some day drinking. This place was an oasis of air conditioning and cheap hooch. 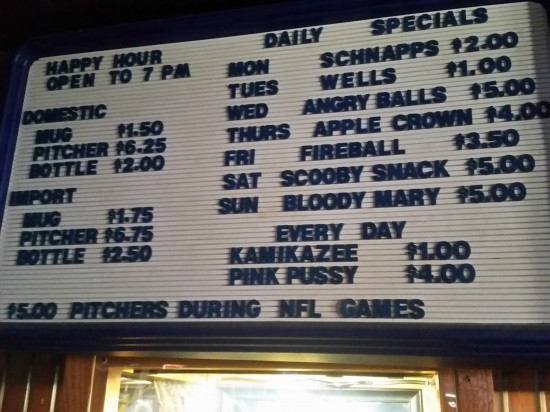 Despite our strongest desires to stay in the air conditioned beer hall, we rolled back into the humidity in search of a beach.

We snaked our way through the neighborhoods of Aransas Pass and stumbled upon some lunch and more beers before riding the Redfish Causeway out to Port Aransas. It was a splendid mix of headwinds, light rain, traffic, humidity, and the most pointless car ferry in history. The canal is only 1,500 feet across for fucks’ sake. Trust me, I mapped it.

Upon reaching the water we were greeted by an endless sea of pickup trucks and country music. But other than trying to ride in the sand it was rather pleasant. The sea breeze overruled the humidity for once and the people watching was top notch. Coldhands’ husband wasn’t able to join us for the whole ride, but he did drive down to spend the night with us on the beach. And he had a Jeep full of ice cold beer. Things were looking up. After sunset we rode into town in search of a bar, supposedly there was crab racing. We didn’t find the crabs but we found a bar nonetheless. Any port in a storm I guess.

The next morning we woke up on the beach to a rather impressive high tide. Thankfully Kerry had urged us to move camp further up the beach, saving us from a swim. 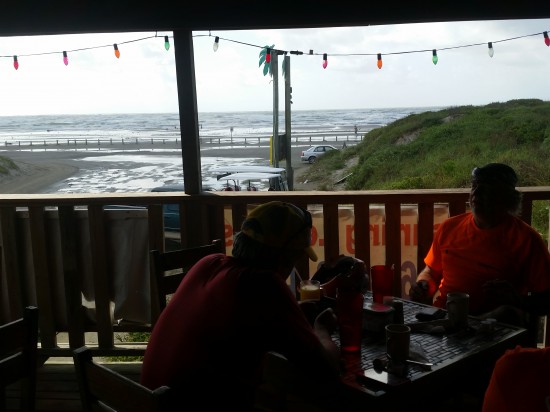 After breakfast Kerry made the decision to bail and catch a lift back to town. She was scared of the long, heavily trafficked road along the coast back to Corpus. So Chewey and I were going to roll it duo. Or so we thought. Alex from Bay Area Bicycles had decided that morning to ride out from Corpus, to escort us back to town. He didn’t even have our phone numbers. He just rode out to the coast hoping to track us down on a whim. On a fixie. Well thanks to some phone tag it worked out. And Alex rode with us all the way back to town.

The stretch along the coast was pretty shitty as it was pancake flat and was heavy with traffic. Fortunately there was a super wide shoulder to utilize. But the absolute worst part of the whole ride was waiting for us after we turned west away from the coast. The causeway bridge into Flour Bluff was terrifying. The thing is 150+ feet tall, with no shoulder. And no retaining wall or railing. It felt like the slightest miscue into the barely knee high barrier would send you over and into the channel below. Not fun.

But shortly after we found our way into the Barton St pub and all way right with the world again.

Continuing back into Corpus, another friend from Bay Area Bicycles tracked us down. Trevor joined the group for what was now turning into another bar crawl.

Having been dropped off in town hour before, Kerry was getting bored drinking alone. So she rejoined the parade for the last stretch. Ocean Drive along the coast just south of downtown is a pretty legit cruise. There’s a big park, decent bike/pedestrian pathway, and cool views of the city.

Sadly our bike shop friends had to peel off and attend to real life stuff like work and families. This left us once again to our own devices. So our last night in town was spent bar hopping and discovering the most handy of all vending machines.

Monday morning came and it was time to tear down the bike and make an exit. Being from the desert I don’t think much about rust. But a couple days along the Gulf Coast teaches you a lot of things….

Lesson learned: there’s fun to be had anywhere. Not every bike trip needs to be epic. Sometimes it’s okay to explore a new city that’s not in “Bicycling’s Top 50 Destination Rides”. If not for this experiment I never would have ever thought to travel to Corpus. And now I have some new friends and stories to show for it. You can’t discredit even the most obscure locations.

13 thoughts on “Darts At The Map ~ The Follow Through”