Now onto part 2 of the Boo RS-M review.  If you missed it, part 1 got into the background of Boo Cycles, and their use of bamboo as a frame material.  Let’s get all the fluff and nonsense out of the way, for the cost (approx $ 3500) of the frame, it better be a great fucking ride.  Tack on the premium ENVE hoops, a XX1 drivetrain, plenty of other high end parts, and its not long before the bike costs as much as a decent used car.  Not long into my first ride, the bike passed the initial “sniff test”, and I was looking forward to spending more time riding it.  This was my first time on a Lefty fork, and after the first few turns and bumps I was a fan.  I never really thought about it unless I was locking or unlocking it, which .  The XX1 drivetrain offered up enough gears for the Front Range, and the Enve hoops kept a turnin’ without issue.  It’s a decent assumption that if you are building up a Boo bike you have some coin, so you can spec it out to your liking.  With that said I’ll focus on the frame.

When picking up the RS-M I was told that the bike would be very stable when descending at high speed.  Heading down the first descent on the maiden voyage I forgot about the breaks and let gravity be my friend.  Nothing too gnarly as it was February and plenty of trails had snow on them, but once I had the RS-M up to “top speed” it felt very stable (compared to my aluminum hardtail), tempting me to descend at speeds that were beyond my ability.  One could argue that’s a bad thing, but since I never ate it while riding I’m going to call that a good thing.  I was also told this bike was made to be “railed when cornering”, but I guess I wasn’t taking corners as fast as I could have (I’ve never been one for “railing”) to notice a difference compared to my other mountain bikes. 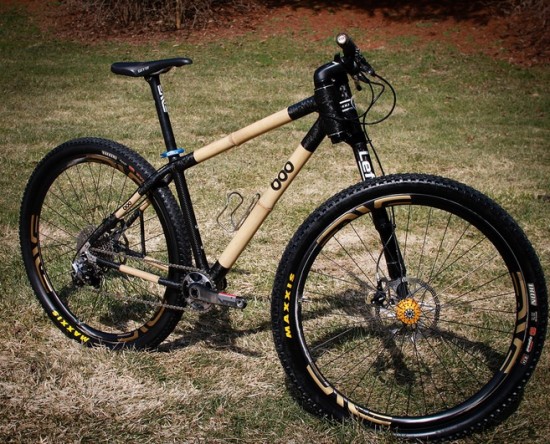 As previously discussed this bike is a bit heavy due to the bamboo, but the complete bike is still pretty damn light.  I never felt that my climbing was hindered by the added weight of the frame.  As is the always the case with riding bikes up hills, the major factors in how fast you go are the strength of your legs and the size of your ass and gut.  On a longer day in the saddle with lots of climbing, pushing that extra weight may add up and slow you down, but that is why they invented 42 tooth rear cogs.

According to Boo a benefit of the bamboo frame was how forgiving is, which I think worked to my advantage while riding it.  When I first got the RS-M, I had been dealing with some lower back issues.  The pain was bad enough that I had been told to take a couple weeks off the bike, and once I got back to riding to take it easy.  When I started to ride again (on the RS-M), I noticed that my back issues (pain, tightness, etc) did not manifest themselves during a 1-2 hour ride.  Whether or not that was related to a couple weeks off the bike to heal, new stretches I had incorporated into my daily routine, or the bamboo taking a bit of the harshness out of the ride is up for debate.  I think it was a combination of all three, but the bamboo probably played a part, so thats a win in my book for the bamboo.

The RS-M rides great (as expected), but the biggest gut check for the frame is the price.  Any custom frame is going to cost you a pretty penny, and the RS-M will set you back 350000 of said shiny pennies.  The price, while tough to swallow, might be justified after considering the amount of time and effort that not only goes into the bamboo to make the frame, but the construction of each frame.  As Jacob previously, their frames are like a fine whiskey that takes time to craft, and time equals money

It seems that one of the easiest things to be done when talking about cycling related products, is to trash the latest and greatest disgustingly expensive bike, frame, part, clothing, etc (we do it here plenty).  Personally, I think great products take time to develop and build, and therefore will cost more.  That high cost for a quality product can be justified.  Conversely, something that is expensive because it is bright, shiny, and new; but isn’t worth a shit is a colossal waste.  These are the products that should be trashed by the masses.  In short, a quality expensive item is cool, an overpriced item royally sucks.  That is the approach I’m taking, and think that quality of the material, craftsmanship, design, and production of the RS-M, can allow someone to justify dropping that kind of coin on the frame.  Also, if someone has the kind of dough to buy a Boo, they probably have plenty of disposable income and don’t want me to tell them how to spend their money.