I originally started this “Stuff Saturday” deal because I like talking about bikes. The little bits are cool but I really geek out on the new bikes that are unveiled every season. Sometimes at Interbike I won’t even drink for a few hours just so I can see more cool stuff. OK, that’s a lie, but I do really like checking out some new bikes.

Trek held a press camp a few weeks ago, just up the road in Sedona, to show off its new Fuel and Remedy models. I was out of town and couldn’t make it, so I arranged for a little private demo of my own. Well, that is kind of a lie too. We never get invited to press camps. We really aren’t house broken enough for those things. In reality, I just whined and complained enough to my local rep that he let me ride his bike for a week. Either way, I got to ride a cool new 2014 bike and now I get to tell you about it. 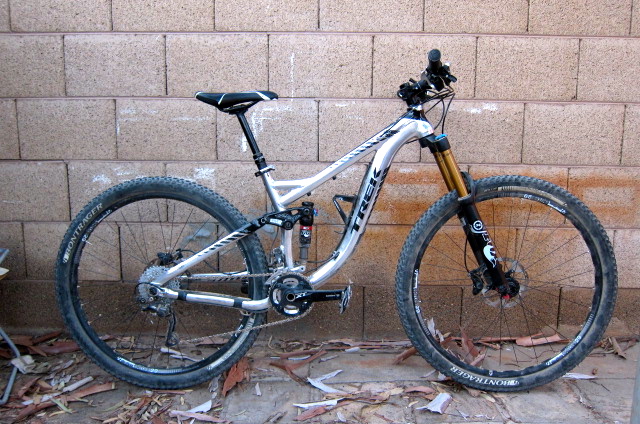 I have owned the 26 inch wheel version of the Remedy for a while and I must admit that I am a fan. It’s getting on in years now and I was curious to see what big wheels and some updated suspension would do to this already great riding trail bike.

It should also be noted that I have issues with 29ers. Not that I don’t like the idea of big wheels, I will ride anything. It’s just that I have a 29 inch inseam and I am constantly stuck in the no-man’s land between a small and a medium on every full suspension 29er I ride. That being said, this Medium frame fit me pretty well. Standover was good and a little shorter stem would get me really comfortable. This bike comes spec’d out with a full XT group and Fox suspension bits. I’m a sucker for the new XT stuff, it just works. It also came with some new Bontrager tires that I felt were completely out of place. Something with 5.5 inches of travel and labeling itself an “all mountain” bike should really have a little bit more meat on the treads. I realize that they need to keep the stock weight down ( ~29lbs) but seriously, these things cornered like I was riding on greased ball bearings.

I wanted to test this big girl on out on some rugged yet unfamiliar terrain. So I threw it in the truck and headed to Tucson for a ride with some friends on Mt. Lemmon. I did a few other rides in my area, but I felt that La Milagrosa trail would really shake down this bike on a bunch of different terrain..

There is a big climb at the start and when I wasn’t hiking, the Remedy climbed really well. It’s no speed demon, but it will get you to the top efficiently and in comfort. Dropping in on the downhill, I was pretty hard pressed to tell it was a 29er when rolling fast and straight. The wheel base felt normal to me and the 140mm of suspension soaked up all the hits. I think the only place this bike didn’t perform well was when the trail turned to really big hits at slow speeds. There is nothing agile about this bike. If I had a little more time on this bike I would adopt more of a “go fast and smash” approach to those situations.

I still feel that long travel 29er is a bit goofy, but it sure is fun. I don’t know if I would ever buy this bike, but I would definitely ride it again and again if given the chance. If you have the opportunity to throw a leg over one of these bikes at a demo or your local shop, I would encourage you to do so. It will give you plenty to talk about over post ride beers.

*Our friends over at Pinkbike were in Sedona for the camp and they did a little more legit coverage HERE.