As often happens when friends visit from out of town, I have been on a non-stop riding binge. Three days of pedaling and liver killing later, we find ourselves here on a Tuesday. My buddy dan is no stranger to DC and has reviewed some whiskey for us in the past so I decided he could just go ahead and guest-write my post for me.

When he rolled into town, my goal was to blow his mind with trails, views, and the overall awesomeness of springtime in the desert. I think it is going well so far. We headed out for a little Sub24 overnighter on the Black Canyon Trail with a bunch of beer and some big dumb fatbikes. We stopped at my favorite desert bar, rode some sand, some singletrack and slept in the dirt. The mileage was modest but being able to see my home turf through the eyes of somebody who had never been here before was priceless.

Here is what he saw:

rolling into the best bar i had ever been in in my life, we were greeted with smiles and familiar-to-Dirty faces.  this of course was followed by beers and banter with the locals, which was half of the entire town.  and these people were tough, real, and as genuine as it gets.

next thing i know, i’m rollin with a belly full of beer, a bike loaded for bear, and a smile like a Cheshire Cat.

there aren’t many pics of the haul to where we would camp for the night, as the extended time at the bar of my dreams put us racing the sun to the top of a table.  however, we beat Ra and bed down in time to enjoy the canyons and wash fill with the glow of the ending day.

being this is early spring in the desert, and most of the worrisome creatures don’t wear down jackets, we were able to bed down without anymore than a groundcloth and sleeping pad leaving the big sky wide open and the calm breeze lapping at our faces.  as the canyon closed dark, the sky lit up with more stars than night, meteors passing through, and the occasional red-eye flight filling the calm with a distant roar chasing it to its final destination.  with the days wear, and the calm of the desert night, we slumbered into our own snoring roar (which helps keep most troublesome and competing mammals at bay, plus fire attracts beings with exoskeletons that have sharp shit full of poison and such).

as the morning sun lifted out of it’s slumber, it dazzled with the beginning of a new day.  as i lifted my head to take inventory of the evening’s mess, i was rewarded with a rainbow of color as well as a really big fucking bull about 40 feet away staring me right in the face.  Dirty reassured me that i didn’t have to worry about it, and that it was fine… but i was between he and the bull, so yeah… no prob for you buddy.

as we packed it in, poured caffeine, and wandered a little aimlessly, we took in the morning sun atop of an old Indian turret used for relaying messages up and down the valley.  this was followed by a beautiful singletrack ride back to the wash and up the other side to the truck, which was waiting to haul us to our next adventure. the swooping turns and grades and drops led us from half way up one side of the canyon and to the other, and the whole time all i could hear in my head was  “walking on the moon.” 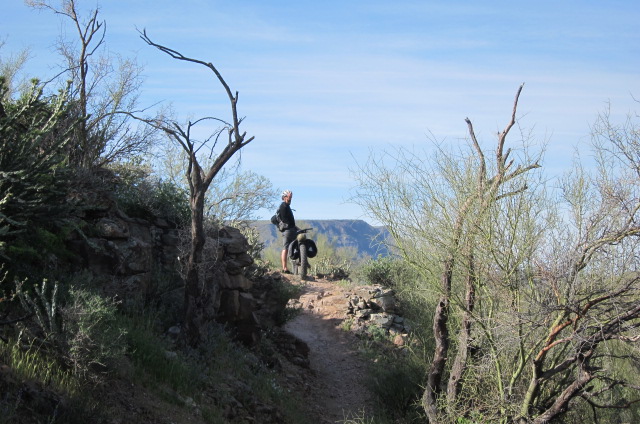 4 thoughts on “Tuesdays with Dirty…and dan”