Some people look to 24 hour racing for the personal challenge, some to play on a team, and others just want to enjoy the event in whatever way suits them. I flew to the Old Pueblo seeking a semi-rad weekend, and I mean that in the most exhausting, depraved way possible. I was quite nervous to be honest. What would commence is a reunion of folks who were ready to ride as many beers as they drank miles. It would be dirty, minus the inside of kegs, and we would probably all get into some sort of trouble. The relief I felt when the wheels were up off the Madison tarmac was akin to that first sigh in the morning when you take a dump; awkward, awkward, echhh, ouch, plunk, ahhhhhhhh….bliss.

Be forewarned, this post may not mean much to you if you weren’t at #24HOP, it might feel kind of like a Tucson visitors guide, or perhaps a shopping guide of slick gear, but maybe after reading it, you’ll feel like making the trip out next year, or to any of Epic Rides other events for that matter. It’s a gathering of awesome people doing awesome things, and who doesn’t want to get in on that?

Fun. It didn’t take long for any of that to get started. Julie Bar (who makes a damn good bar by the way) and Cirrus built the weekend hotspot, the Cirrus Lounge, and of course Doris the Drunkasaurus played a good host. That whore.

It was cray, there was some dancing, and there were bacon chocolate chip cookies. Thanks to Hillary for the nourishment and Sean for the delivery, these cookies sat well after washing it all down with a bottle of agua mágica. We needed plenty to get us through the gusty, sleepless night.

Everything was right until the party on top of the hill. For the record, this party didn’t actually occur, unfortunately and fortunately, but thanks to whoever wrote this. And oh yea, fuck Rapha. 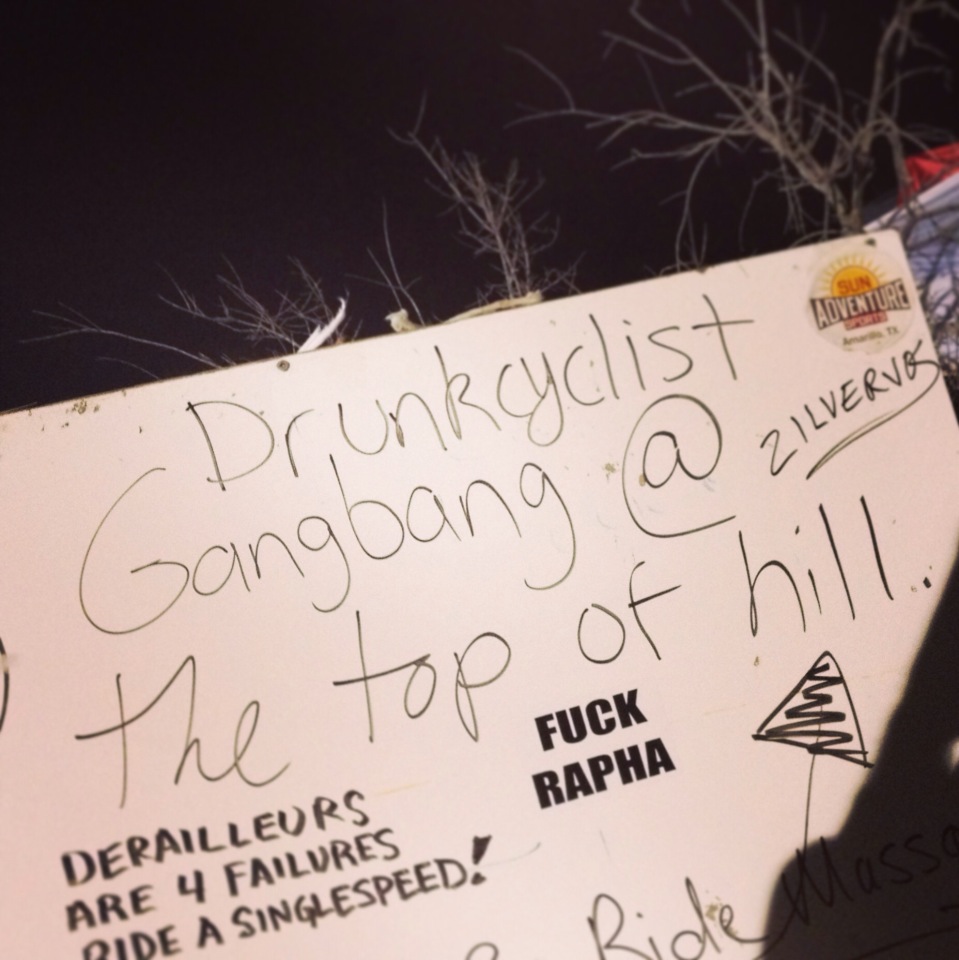 Anyways, I don’t like race reports all that much, and I don’t necessarily like long write-ups about events, so here’s a list of the top 10 things from last weekend (that I can remember). Hopefully you can make it out next year, because it’s one of the best times of your life.

Brought a tear to my eye having to leave Tucson. I love that place. It feels like home. But whenever life feels difficult, or weird, or boring, or just shitty, you can’t be a pussy about it. You know, because that’s just unproductive. Gotta keep and open mind and keep talking to people. Did just that during my 3-hour layover / 12-hour hangover at O’Hare Airport. I met a girl at the bar who was starting a blog. It seems like a lot of us here at DC would approve. It’s not live yet, but you might want to bookmark it and keep your eye out. Just sayin’…

If you want more from last weekend, and a much more professional report, check out Devon’s write-up over at Mountain Flyer. And speaking of Mountain Flyer, you might want to grab their latest issue. #dirtyhemingway