I share a fair amount of my activities with all of you here on this yellow page. But this year found me so busy (in a really good way) that I never really had time to post up everything I wanted. So I thought that I would use the new year as an excuse to be cliché and look back on some of my favorite images from the past 12 months. They aren’t mind blowing and I am in no way a photographer, I will leave that to the pros like D2 and Caveman. Some of these were from my phone, some from a DSLR, and others from a point and shoot. Either way, they were great memories and I thought you might enjoy them. 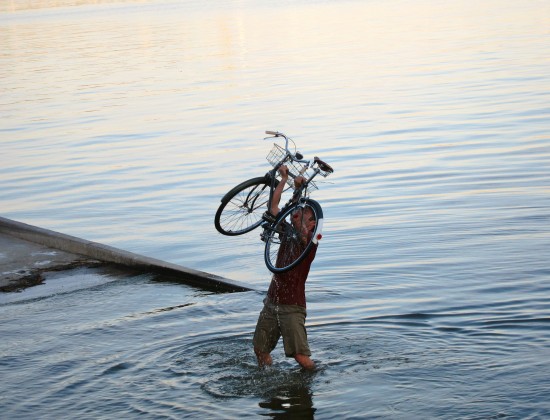 A bunch of friends and I decided to embrace our inner jock, call in sick to work, and take in a spring training baseball game. The ride there was mellow, the game was, well, a baseball game. But enough beers were drank in the sunshine that the ride home was pretty interesting. A video was made, but I think this picture sums it up pretty well. This year, I will call in sick more often. 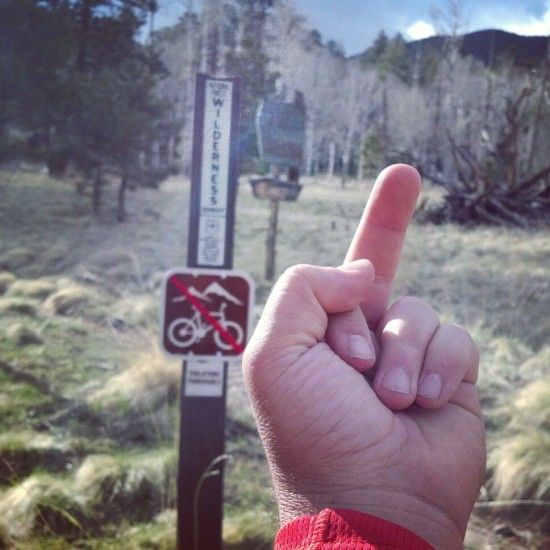 Last spring saw me trying a few new things in my never ending fight to beat boredom. Things like hiking without a bicycle. I stumbled across enough of these signs amongst the San Francisco peaks in Flagstaff that I felt the need to document how I really felt. 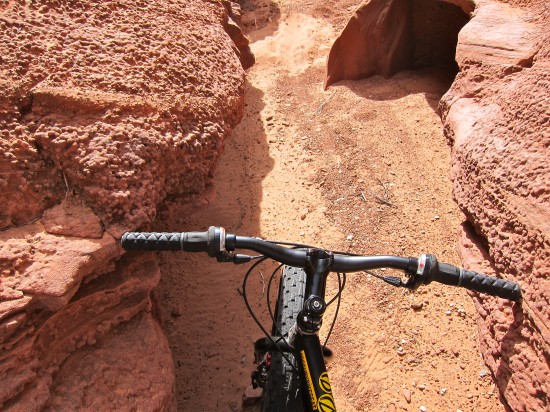 You probably remember the video I made with my fat bike hunting for slickrock on the shores of Lake Powell. But what the video didn’t show was the times that I was cruising along at full speed and came to a dead stop with my bars wedged in the canyon walls. It happened about a half dozen times and the conversations I had with myself were quite comical. 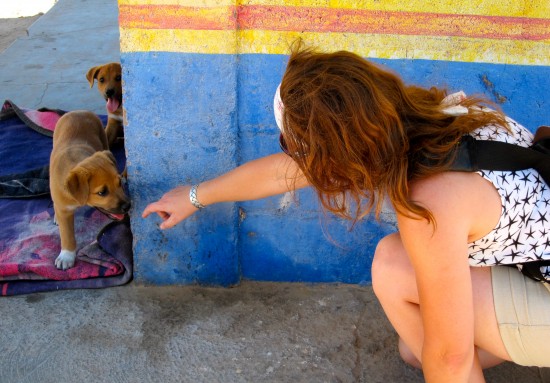 Before summer heated up, I decided to go down to Mexico and test out my new fat bike on the beach. My traveling companion seemed to be a magnet for every stray animal we came across. I think this image sums up the chill vibe of a long weekend in Mexico with no particular place to go. 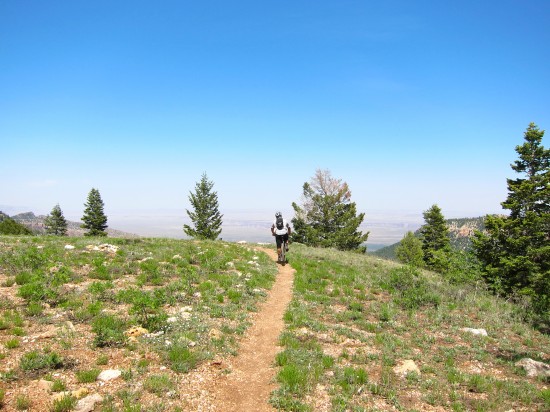 As the desert started to heat up, weekend migrations north started to happen more frequently. The Arizona Trail near the North Rim of the Grand Canyon is perfect for this.  Enormous views and very few people make this one of my most favorite places on earth. I spent days up there riding empty trails and encountering only a handful of people. 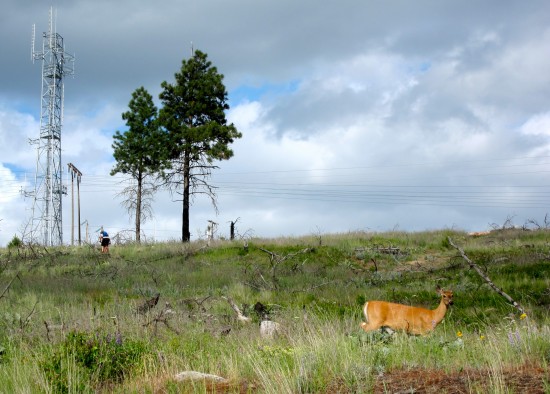 Running away from the summer heat once more, I found myself flying to Spokane to ride with Caveman. When I wasn’t making him stop and smell the roses or sit around a campfire he was dropping me on climbs. I stopped to throw up on this particular climb, as he rode away, and snapped this picture. 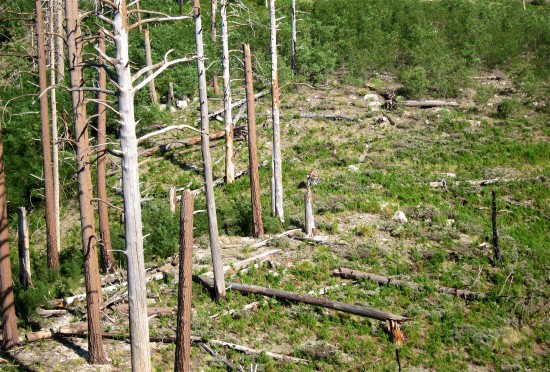 More than any other year, 2012 found me hunting for trails that I have never ridden before. I heard from some Tucson locals about a long downhill on Mt Lemmon and decided to go check it out. After a few hours of exploring and coasting we realized that we never thought about how we were going to get back up to our car. Turning around and riding back the way we came was the only answer. Here is my riding partner(little pink dot in the center) doing the single speed walk of shame in the post-fire landscape of Samandiego Ridge 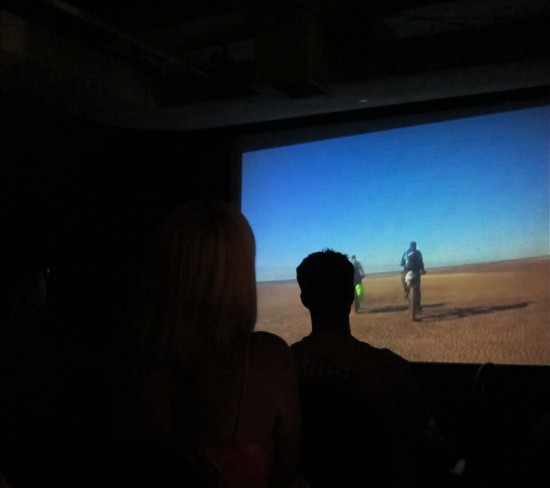 My buddy Joe did a couple showings of the Reveal the Path movie and we decided to show our Mexican fatbike video as an opening act. Devon made a great video and it was pretty cool to see the reactions of friends and strangers to our little adventure. About 85 people in one room watching a trip that was so personal to me, on the big screen, was a really intense experience. 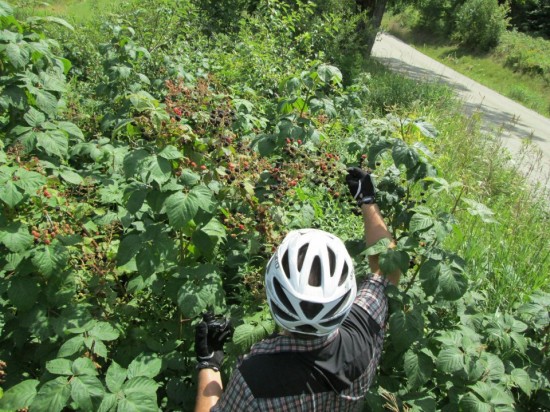 Single Speed USA was a damn good time. Too many beers and rowdy parties with a little bike riding mixed in. That was all well and good, but the highlight of the trip for me came 2 days after the race. While everybody else was heading to the airport with what little dignity they had left, S. Jesus and myself were getting a locals only tour of some pretty amazing trails. Roots, steeps, stunts and drops were interrupted by a stop at the biggest wild berry patch I have ever seen. Vermont energy food at its finest and a fantastic day on the bike. 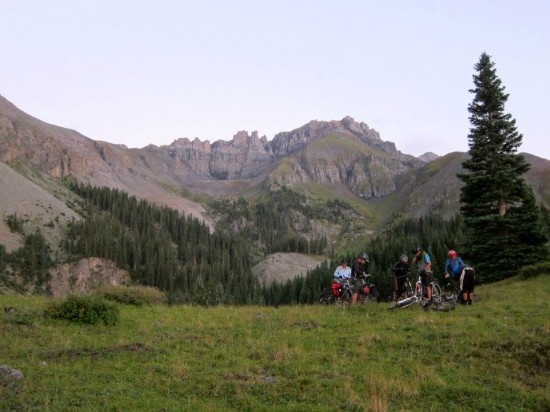 My buddy Maximum and I took a last minute trip to Telluride to see the Worst Named Bike Race on Earth otherwise knows as the US Pro Cycling Challenge. After we saw the race from a very comfortable rooftop in town, we set out for a little ride. Guided by Stompa Slappy we headed off into the hills to take in the amazing scenery. It doesn’t get much better than finishing a 4 hour ride with lights on a 30 minute descent. Thanks Slappy. 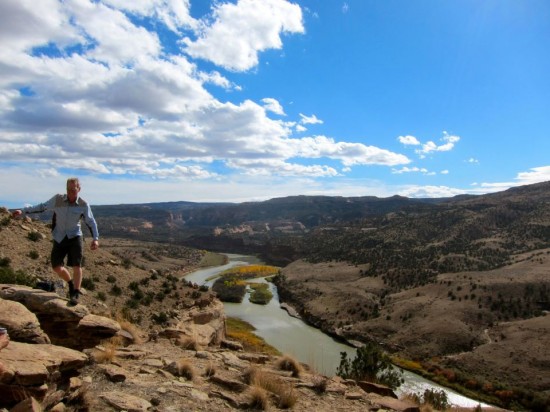 Never been to Fruita, CO? You should probably go. There are some pretty fantastic places to drink beers during a ride. Like here for example. 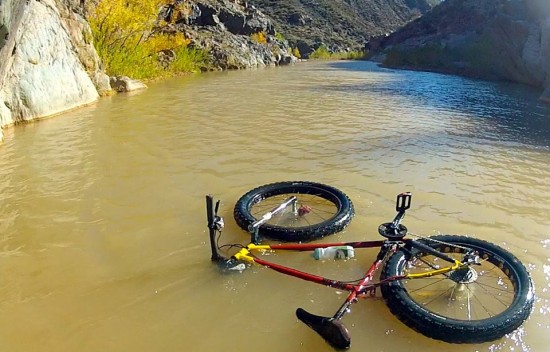 Continuing with my never ending search to ride my bike places nobody has ever ridden, I found myself nipples deep in the freezing cold water of Tonto Creek. This is a screen grab from my helmet cam and in the footage you can actually hear my teeth chatter. I’m not big on swimming, but at least my bike floats. 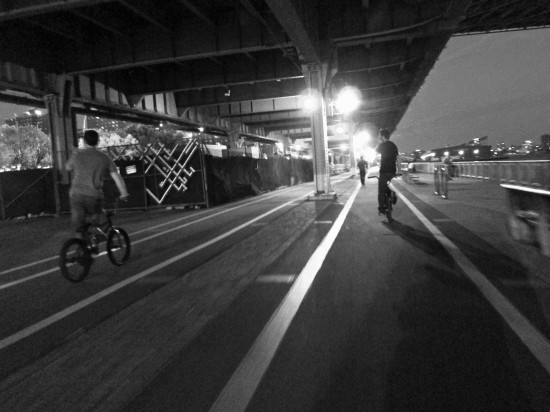 This might be my favorite picture from this past year. Three grown men cruising around the Lower East Side of Manhattan on little kids bikes, looking for spots. The same thing we have been doing since we were teenagers and will keep doing as long as we possibly can.

The past year may have been the best one of my life. I met more wonderful people and saw more amazing scenery than I ever could have dreamed. With a handful of states, Europe and Asia already on my calendar, it is shaping up to be another wild ride. I am fortunate to have an audience to tell my stories to and I thank each and every one or  you for taking the time out of your day to read my ramblings. I will do my best not waste your time. Bring on 2013!

6 thoughts on “Tuesdays with Dirty: A year in pictures”