So, I have been hearing my friend Paul Lacava for the last few years talking about this Bend, Or. to Oakridge, Or. ride he’s been wanting to do. Its some big miles and some serious hills to cross over for a solo bike ride for a day. Paul is one of those guys that when he says he’s going to do something, he’s gonna fucking do it. I am very proud of him for pulling this off and I think he should be also. I asked him last week before he did it to do a write up and shoot some pics with his phone, well he did both and you get to read his version of the almighty one day solo adventure

It’s 2:30am on September 19th, 2011. A time that may normally reserved for last call at the pub, or at least a good night’s sleep. But not today. Instead it was a pre-dawn wakeup call and time to depart. Not sure if I was looking forward to this day, but I just couldn’t shake this idea for a little mountain bike ride that had been in works for over ten years time. The type of ride that only happens if you start really damn early and end late. Hopefully the time was right. If it wasn’t, I’d find out in more ways than one. Ideas like this usually come about after a bad bet or a bunch of shit talking after a proper epic. A “What if we…..?” type of moment. And it festers in the mind like a bad cold, until it just seems right to give it a go and put it to rest.

This ride would combine some of the greatest trails that Oregon has to offer a mountain biker. Starting in the riding mecca of Bend, Oregon on the eastern flank of the Cascade Mountain Range, it would traverse some of the best trails in North America all the way across to the western slopes of the Willamette National Forest foothills, ending in arguably the best little town for all things two wheels and dirt, Oakridge. Various routes exist through this section of wilderness, some longer than others, but there is a clean and natural way to connect the dots between these two places normally reserved for a ride that ends where it started. It takes a little bit of imagination to think for a second that linking this route makes any sense at all. Attempts had been made to rope unsuspecting souls into this adventure, but alas, no takers emerged.

Not sure just how long this day make take, I started off by myself with a bit more gear on my back than was comfortable. Contents included enough lights and batteries to last a morning and evening without daylight, all the standard emergency supplies, bivy blanket, spare clothing, a few thousand calories worth of food, most notably a few slices of pizza acquired from Bend’s local hotspot 10 Barrel Brewing the evening before.

My chosen route starts off on Bend’s fast and flowy Mrazek trail and winds about 14 miles upwards towards Broken Top mountain and Mt. Bachelor. Lots of bar hugging tree lined corners and dusty trail brought me to the high elevation Metolious Windigo Trail. A few pairs of eyes glimmering in the dark fortunately only ended being a few deer trying to sort out why the hell I was passing through their backyard. Up here, a touch of moisture combined with the open canopy and loamy surface of this section was making for some absolutely prime conditions. The fall rains hadn’t quite delivered the goods yet, but peak fall conditions were close at hand. After a few hours the trail opens up into some rocky meadows that met with the sunrise on what was looking like a fantastic day.

From here you get a ripping section of roosting corners and wide open sweepers that drop you down towards Mt. Bachelor and right about where most rides turn around back home on a big day. The Metolious Windigo Trail winds up and around the northern side of the mountain around to the southwest through some sandy washes and technical lava rock sections towards Lava Lake. About six hours into things I was able to re-supply some water at a local campground right before hitting the only road and pavement section of the ride. I’d have to traverse around some the Three Sisters Wilderness region on about 7 miles of the Cascade Lake Highway and a few miles of dirt roads to the southwest before winding back onto more remote singletrack.

Feeling good and making fast work of the trail, I made my way onto the Lemish Lake and Charnelton Lake trails en route to one of the best places to stage a good weekend of mountain biking, Waldo Lake. This was far more painful that I planned. A lot of blown down trees lined the Lemish Lake trail and the going was slow. Legs were starting to feel a burn and about fifty odd hike a bike sections didn’t help. Waldo Lake has is one of the clearest lakes in the world, and a good sized body of water surrounded by an amazing network of pristine trials of which it would take days to ride all of. This section of high elevation lakes and peaks sits between roughly 5,000 ft and 7,500 ft and takes until late summer to be free of snow melt. If a person wanted to do a relaxing two day bender of riding, this would be the prime place to stop for a nap, day, or week rest. But no time for an extended tour, I made my way onto part of the northern section of the lake, where I had pre-arranged to meet my dad for some extra supplies. Not sure just how stupid this ride was going to be, I’d planned a possible bail out here and grabbed some additional food and a fresh pair of shorts. Enter secret weapon #1 and #2: the bacon avocado sandwich, and a plate of lasagna. It was nice to have the support, and my dad is the guy who most likely made these types of days seem like a good idea. A seasoned long distance trail runner, he’d spent more than 24 hours on a run or two, and this day didn’t seem all that bad with that to put things in perspective. Nine hours and 70 miles into the day, I left for what would be by far the most difficult part of the route.

About four days prior I had acquired a new whip for the day’s ride. Spending most of my time on 6” travel trail bikes and 26” wheels, I knew I needed something a bit faster. Enter secret weapon #3: the 4” travel Anthem X 29er full suspension bike by Giant. I was no stranger to this bike, working as a sales rep for Giant (Shameless plug), but I’d never spent more than about an hour on this bike and was happy with the choice. A quick ride two days prior confirmed a great fit and with a few tweaks like adding a dropper seatpost and some wide bars made this ride feel like familiar territory. After all, there was over 100 miles of sweet singletrack to cover today, plenty of time to rally some choice sections of dirt! The next section was a ripping-fast smooth descent on Betty Lakes and Gold Lake trail as I made my way over to the hardest climb of the day, Mt. Fuji.

Mt. Fuji delivers a 1-2 hour granny gear climb that is so slow you nearly fall backwards on every rotation of the pedals. This was the moment that I realized moving on from Waldo Lake was rather committing, and once I got a bit further there would be no turning back. This 2’ wide loam filled staircase to heaven would take me up over the should of the mountain and drop off the backside to the most feared section of trail all day, Bunchgrass Ridge trail. After filling up another 100 oz bladder of water in my pack at a small pond at the start of the trial, you get the worst visual of the day. 85 miles in, on the far horizon you can see east over to the Three Sisters, Broken Top, and then barely discernable Mt. Bachelor and Bend another 30 miles beyond that, a reminder of how far I’d come. 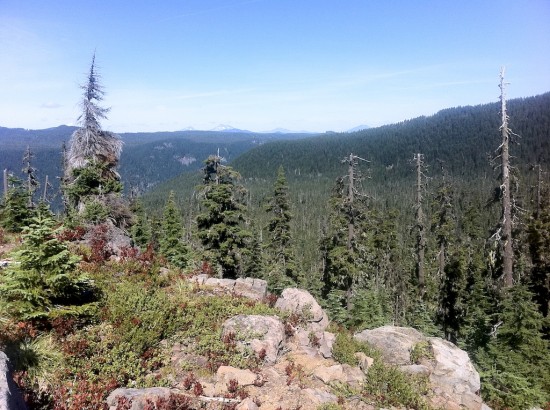 Bunchgrass Ridge can best be described as Oregon’s most epic and raw piece of adventure. Having finally ridden the trail for the first time a month prior, I wasn’t really sure whether it’d be a good idea knowing what lay in store. Sometimes ignorance is bliss. The biggest challenge of this day would be that the most ridiculous and most remote section of trail lies at the end of the ride, but arguably the best as well. Remote, overgrown, rough as hell, this trail will deliver you to your grave. There is no support out here, no lifeline except yourself, and I’d not seen more than one person on the trail all day, and most certainly wouldn’t see more here. The trail winds west on a sprawling ridgeline that just seems to go on for eternity as the trail drops up and down the ridge in a sea of open meadows juxtaposed with the dying trees of an old burn and a carpet of bunchgrass.

More of a visual masterpiece than a fun section of trail, the upper portions of Bunchgrass require miles of hike a biking. Today would be reduced to more of a stumbling death march. Two steps forward, one step back. It turns out that a Garmin doesn’t really register your movement when you are travelling less than 1 mile per hour, and this as a sad reminder of how things were going at this point. However, I’d come prepared for this moment. Enter secret weapon #3: Led Zeppelin’s Physical Graffiti. I’m not even sure what really happened during the next 83 minutes as this album progressed, but it didn’t really matter. Time had slowed to a near stop and I somehow made it past the top of the ridge and rolled into the next section of amazingly lush trail beneath an open canopy of huge Doug Fir.

Seconds turn into minutes, and the minutes turn into hours, and the climbing never ends. Bunchgrass trail incorporates approximately 4,000 ft of climbing a total descent of 8,000 ft as you finally fly down warp-speed foot-wide sections of super buff side slope down into Oakridge. The last light of day hits the west and the sun disappears completely during the final feet of downhill into town. Lights go back on. Hanging on by a thread, it all seems a blur at this point. I rarely have the opportunity to see both a sunrise and sunset in one day, let alone during the course of a single ride.

My unofficial goal was to make it to town before the Brewers Union Local 1080 pub closed up for the night. 8pm and the doors are still open and all the pieces had fallen together. A plate of sweet potato fries, a bacon cheeseburger, bowl of chili, and two imperial pints of great local IPA go down without a second to spare. It’s a good life. Over 110 miles of amazing trail, 12,000 ft of climbing, one mountain range traversed, this was a humbling experience, but I’m already looking forward to the next idea…

I am... Caveman. Spokane, Washington, USA
View all posts by caveman →

37 thoughts on “Paul just did something badass”