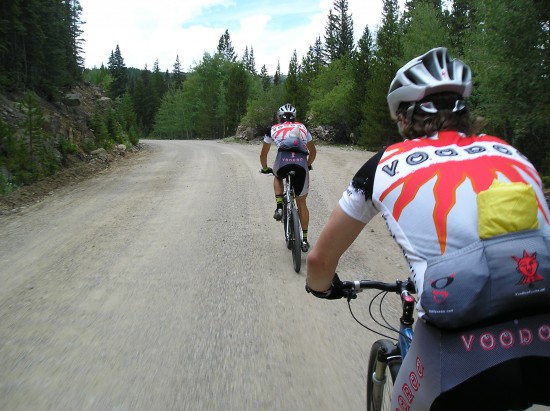 Benson and Me Riding up Sugar Loafin. Big Jonny Took this photo on the fly. Not sure what year it is though. One of the early years. 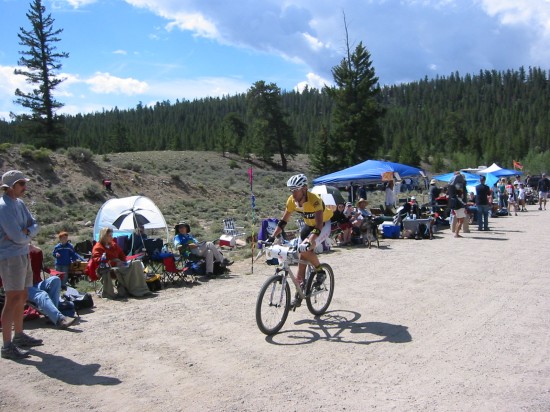 This is through one of the feed zones in the race. I was rocking one of the original jerseys back then. I must have been second the year before because I had the #2 plate on. 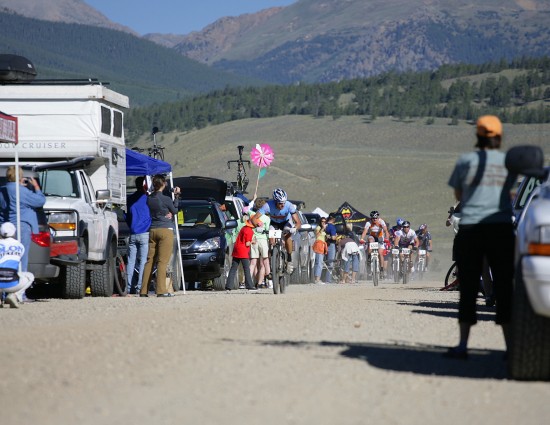 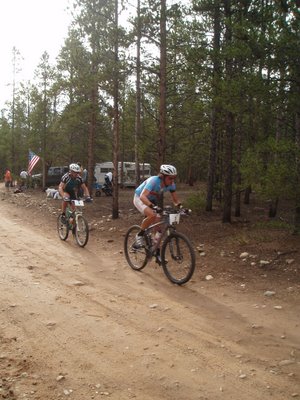 Weins and I giving it some stick. I think we had already dropped the field at this point and I was trying to figure out how to get rid of Dave. Pretty much my entire LT 100 mtb life was figuring out how to get rid of that guy. One thing that I will say that Dave is a class act. I respect him to the utmost. 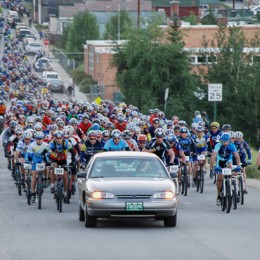 Start of the race one year. Now the field had tripled in size. Back in the day it had a more local and intimate feel. Now we are all just cattle following the lead moto.

One of the climbs that I used to train on all the time for the race. People could never figure out how I got ready for the race. Easy its called secret training. I did it when you were asleep. While you were in your room getting weaker, I was out there in the sticks getting stronger. 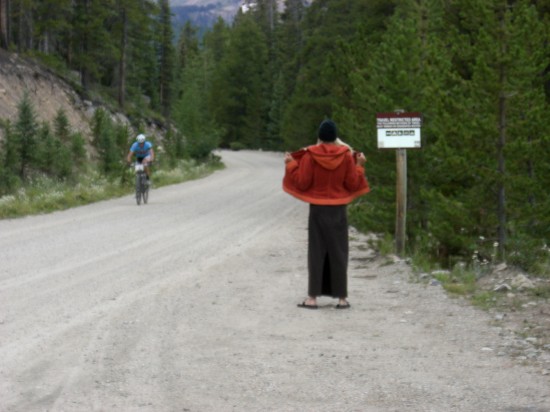 For sure a reason to race! 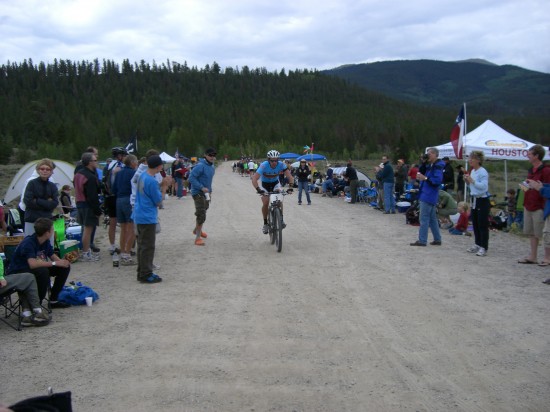 Not sure where this was or what year. But its good to see come clouds. 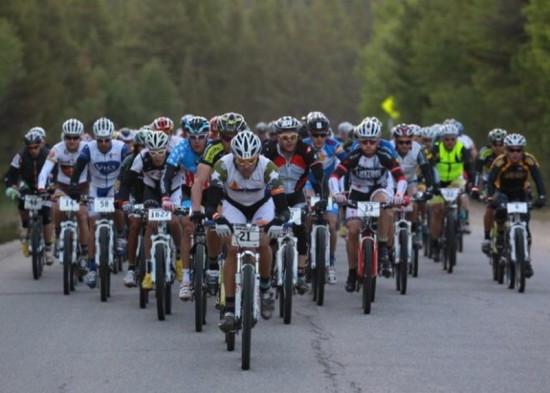 On the pointy end of the stick. This was my worst year ever. My body didnt wake up and things didn’t go well all day. Sucks when in 10 years I went under 8 hours every time but this day. 8:04 or something around there. Oh well in 10 years only one off day. Lots of people would kill for an 8:04 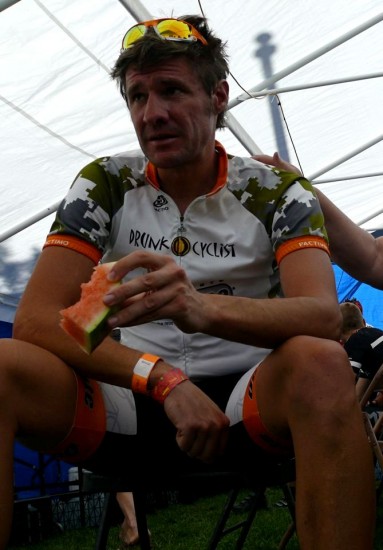 Me completely wasted on my 8:04 day. Too much stress and way too much booze that year. 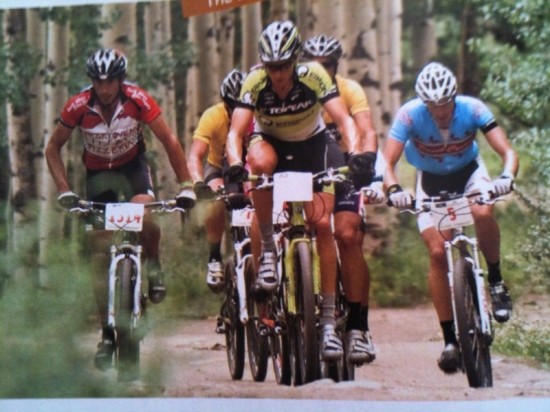 Ah what a great year. Black Cloud is just off on my side, you can see his yellow DC jersey. The other yellow jersey is Lance. I had attacked about 1 mile in and soloed all the way up and into Columbine. 43 miles is a long way to go by yourself. People weren’t even cheering for me. Fuck You. They were waiting for the poster child. Fuckers, fuck you, I hope you got what you came for. It was great to see Dave beat him that year. Mad props to Dave for sure. 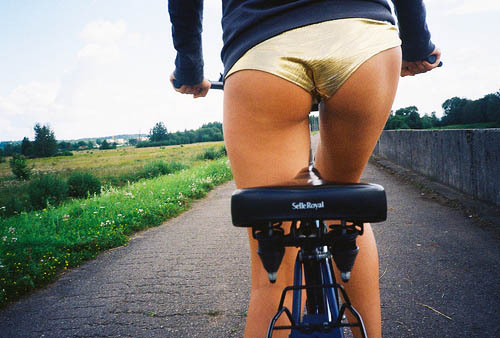 We all need more of this on our rides. 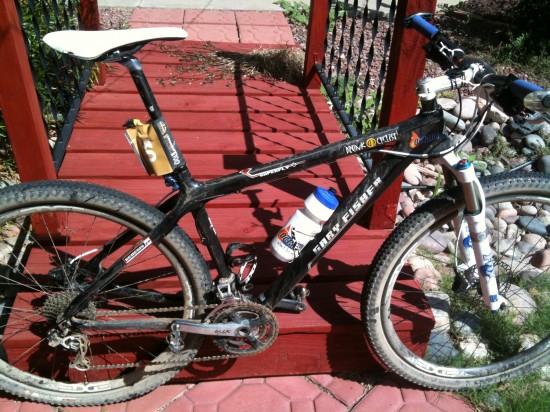 My borrowed whip for this years race. Big time shout out to B-Man at Fairwheel bikes. B-man has consistently helped me out from day one with whatever I needed. This year he just looked at me and said take mine. Yours is a pile is shit. I said ok. Gary Fisher 29er superfly. Carbon Edge wheels. Then just a mix of xt/xtr Nothing fancy but for sure getting the job done. Thanks B.

Let me know when you want to go to Tinys. Burgers and beer on Ajo Highway. But they only take cash….. 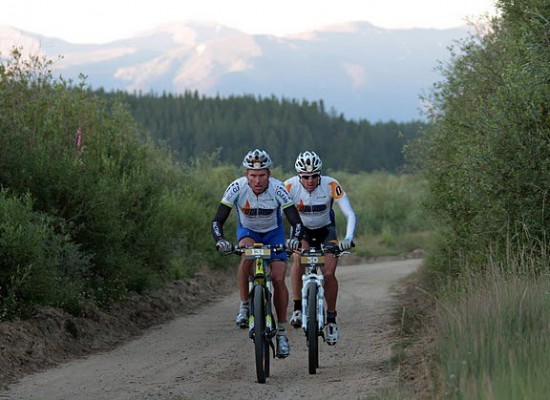 The real pointy end of the stick. Good friend of mine PT and I off the front this year. Dont ever be afraid to race your bike. You didnt come there for conversation or to make friends, and in the words of the Wolfe “it aint a drinking contest” So get on with it and race the fucking thing. Yes it hurts but what did you think it was going to be? A tickling competition? These lads are out to hurt each other. 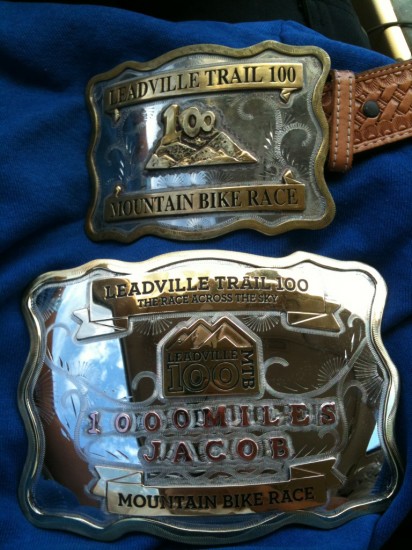 Do 10 of them and you get one of those and 10 of the smaller ones. Funny how things change over the years. At some point I want to be somewhere and wearing the fucking huge one and someone says yeah I went under 9hrs I got the big one. I’ll just pull my shirt up and say yeah how about them apples. But seriously the thing is huge and I dont think it can be worn without some sort of back brace.

One time I was at a party wearing one of my big (small ones) and some drunk guy comes flying up into me and says you’re not a mountain biker, you’re a fucking roadie. I asked him why he thought that? He said LT100 was a dirt road race. I said ok. That seemed to piss him off. But hey buddy, Im wearing the buckle and you’re not. So give it a try and lets see how you do. Crickets were chirping….

This race has been a good one for sure. It brings people to thier knees and takes others to a place where they didnt think they could go. I have never been afraid to attack in this race and just like all races, race this bitch from the front. I have seen Big Jonny go from barely finishing it, to coming close to 9 hours to getting hit by a drunk driver. I was there when Gnome inploded his first year and then came back to help work over the Hair Farmer on the flat ground. I heard Bensons tire blow in the first 2 miles only for him to get lost because the course wasnt marked. Ive seen it as a grass roots race, some sort of step child of a bastard race that everyone could fit into the gym for the awards. Now its a cattle call to the start and people dont even train for it anymore. They just show up. I hope for your sake your choking on your own lungs as they fill up with fluid. This race deserves respect. I always said if your not waking up in the middle of the night scared and sweating then your not ready.

The race this year was a zoo as normal. Loads more people. You all should be sending a email or a phone call to the race people about starting oh about 3 min back from the lead group. I would say that you never had a chance but I do know of 2 guys who made it from way back there to the sub 9 hour mark. So it is possible. Then lottery, yeah its not a lottery. Its just like the rest of the world, its who you know. So if you dont get in, just start calling and if you know Kevin Bacon then you should be able to get in. It started fast this year and ended even faster. Todd was for sure a worth winner and there is no doubting his ablitities. Just like Tex said if you can get it done in 2 hours you will be the guy getting it done in 7 hours. Or 6:20 if your Todd. I myself had a great day on the bike. No real problems with food or anything like that. Just a great ride on a great day to ride. I myself was planning just to scrape in under 8 for my final one. Much to my suprise when I hit the top of Columbine 10 minutes to spare and feeling great. The amount of traffic still comeing up the hill was ridiculus. The cut off times for this race need to be harder and enforced. Its for saftey folks. Yours and mine. Then ride back up Powerline was a tough one as usual. I did get to meet Dirty for a second. That was a pleasure. 40 hands I know from back in the day. ( I hope you learned your lesson to never challenge Big Pun to a drinking contest) So there is a good photo of the DC ape and myself or a shell of myself at the steep part of Power line. Great to see you Dirty. Then pretty much a ride back into town. Really. Its was just a good day. Nothing super fast just nice and steady all the way in. I didnt have that big punch that I needed or like I had 5 years ago. The years are wearing on me and its getting harder to train. But its been a great run for sure. I wouldnt change it for anything. Thanks to those that have helped me over the years. Benson, Tex, Wolfe, B-man, Gnome, Bacardi Marty and all the teams that I have been on over the years you have helped more than you know.

And now a word from our sponsors: www.athleteoctane.com.

I’ve been drinking it for over 10 years. It helps me recover from hard rides and hang overs. What more do you need?

See you on the trails. 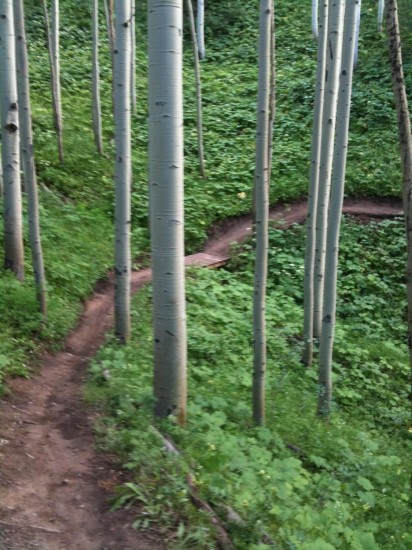