One more day again, eh Tommy? Survived the Pyrenees. Just like you did in 2004. You never fail to impress. 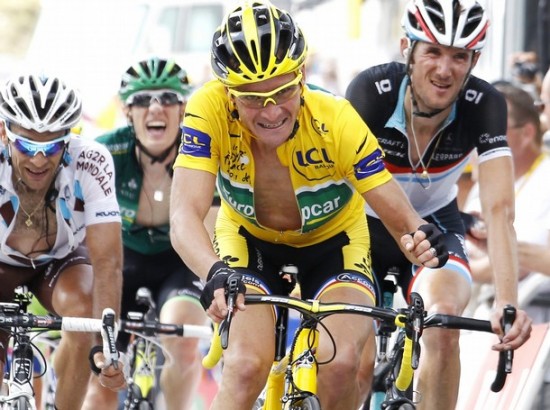 I’m not quite ready to call him a potential Tour winner. He will need a substantially stronger team around him to achieve that goal, even if the maillot jaune has a posse.

But, I suppose Pickering may be on to something: Doubting Thomas grows in confidence.

Many have commented on the changes in racing, this year being part of the trend. The boys just look, different. The exploits somehow more human, more believable. Anyone can see that professional cycling has changed.

“I have probably improved since 2004”, Voeckler pointed out. “This year, I have the best legs of my career, but if I’d had the same legs as today in 2004, I still wouldn’t have been able to follow Armstrong and Basso.”

“Since I turned pro in 2001, things are getting better and better in cycling,” Voeckler said, not afraid to speak his mind.

“In the past few years, I’ve learnt not to pay attention to what the other riders are doing but I do think the people who run cycling are working in the right direction.”

Between the statements yesterday of Floyd Landis and Thomas Veckler today, I feel pretty good about where things are going.