I’m generally more comfortable playing tour guide as opposed to being on the tour. Friends come to visit, you hit the pubs, you ride the trails, show them all the great food you have in town. But when I travel I usually enjoy finding my own way. Stumbling upon all of those things au naturel. It feels more accomplished and like I’ve made more of a connection with the environment.

But on occasion you have to sign up for the grand tour. And succumb to the whimsy of the kangaroo court of friends you’ve collected over the years. It’s only fair. You can’t demand of others what you’re not willing to return. Seeing as Charlie has now made two journeys to visit my desert, I owed a visit to the isle for his Gravel Dash.

Chewey was hip to this adventure too, so early on a Thursday afternoon this May we found each other in London. Made our way to a Hyde Park hotel, asked for a couple beers from the kitchen, and got to building bikes in a way too small room. European hotels are meant for small people and small tyres. Charlie lives way the fuck out in the famed English countryside so we’d have to make a train journey to his village. But first we needed a night of drinking in London to make sure the bikes worked properly after the flight. Which ended at a basement bar in SoHo where we shared pints with a bloke who claimed to have raced with Bradley Wiggins when they were young. There was little credence to his stories but he did have a spindly frame and a Specialized shirt on, then he hugged Chewey as we left, to which he commented later “the kid certainly felt like a roadie.” 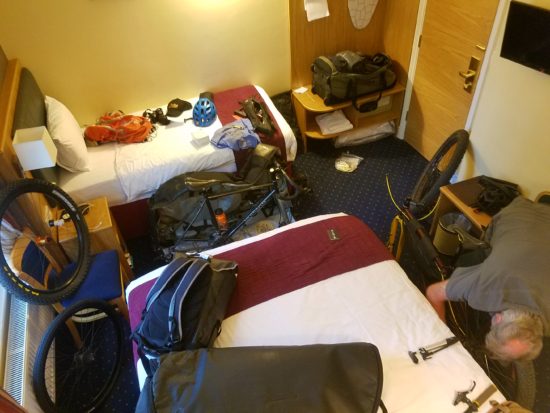 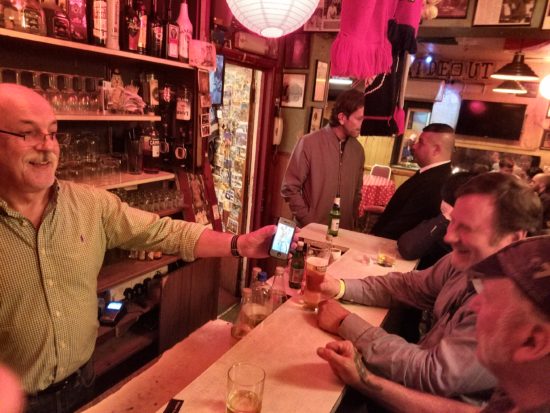 In the morning we hastily bought tickets and forced our way onto a train with all our gear. Again we found the cycle space more adequate for fixies and Bromptons, less so for our 29+ wheels with frame bags galore. But alas we arrived in Bournemouth to learn that a Welcome Committee had been dispatched from Swanage. Jon, Ian, and Dave had ridden an hour to find us in a pub mere meters from the train station. And so it began. A four day tour (glorified pub crawl) of the Dorset coast that would include 150+ miles of riding, numerous changes of plan, roast lamb, feats of strength, a woodhenge, colloquial debates, an injured Frenchman, and a sea cliff picnic. 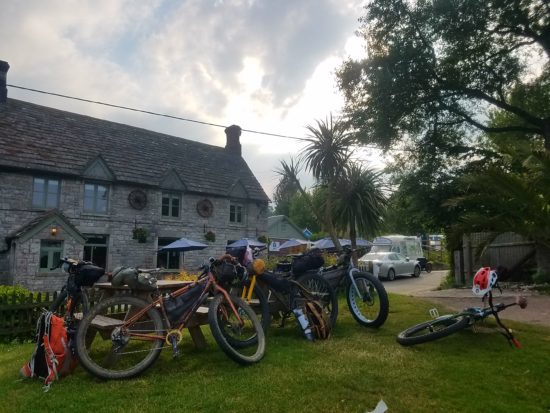 After an hour plus of banter the Welcome Committee saw to it that we actually made it to Swanage. But we still invoked the ‘every pub on the left’ method of procrastinating. Fortunately just past the chain ferry across Poole harbor there was a lovely brick inn overlooking the sea with house made ales. It was the most British thing I’d see up until this point. It was also where Welcome Committee leader Jon informed me that he was under contract with Charlie as our handler for the remainder of the weekend. The last time Charlie came to Arizona I sent him, Ian, and Gil off on the AZT for a three day journey to 24 Hours of Old Pueblo. I even made them fancy maps. However according to Charlie the maps called my career as a professional cartographer into question. So henceforth Jon was under no circumstances to give us any accurate information. Whether it be distance, direction, historical fact. Everything that came out of his mouth was a 50/50 gamble. And he peppered in just enough British jargon to make anything sound legit. 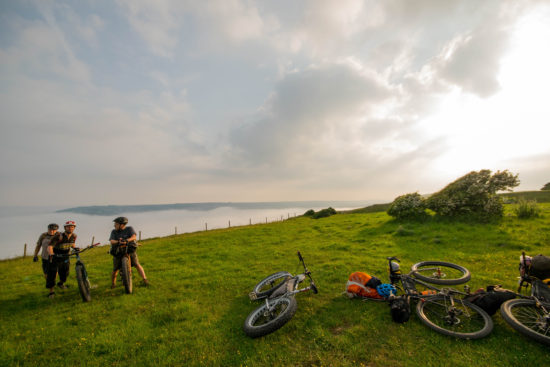 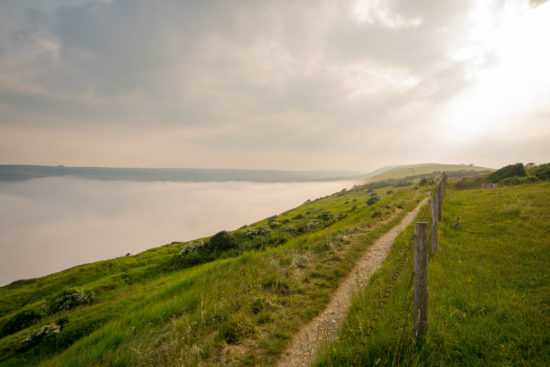 The whole Gravel Dash affair starts and ends behind a pub. With Charlie shouting mostly incoherent directions and poems about living life to the fullest. The Gravel Dash is also a bikepacking event. A two day ride with a group campout/party in the forest. All sorts of rigs were loaded down with food, and tents, and waterproofs. Though since the pub wasn’t open yet, we stood around near Ian’s van drinking beer until it was time to depart. i.e. 30 minutes after everyone had left. 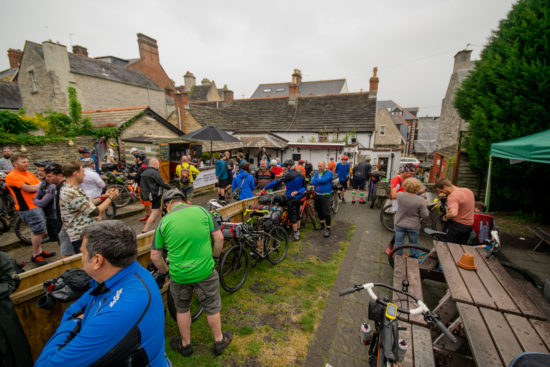 I thought Jon was kidding when he said he’d escort us at all times. But he was like a shadow. Offering questionable history and local knowledge at every turn. There would be no escaping the misinformation. However, the man is a licensed gin and tonic aficionado. And at the top of this particular climb he busts out a flask of frozen limes and proclaims “G&T stop!” Things were getting on nicely. It was here we rendezvoused with the Surly boys. Fleck, Trevor, and Duncan joined our merry band at the back of the pack. 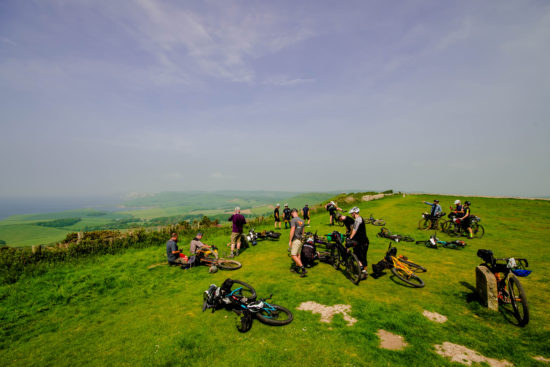 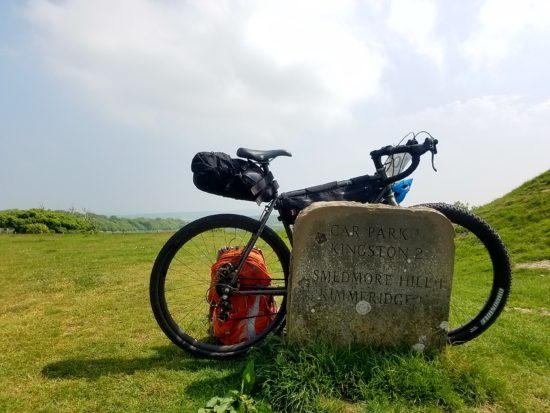 Yes that’s a 3.0 Chronicle up front and a 700×42 in back. It may look ridiculous but it worked surprisingly well. Except for the touring cassette. That made some of the climbs a bit grunty. 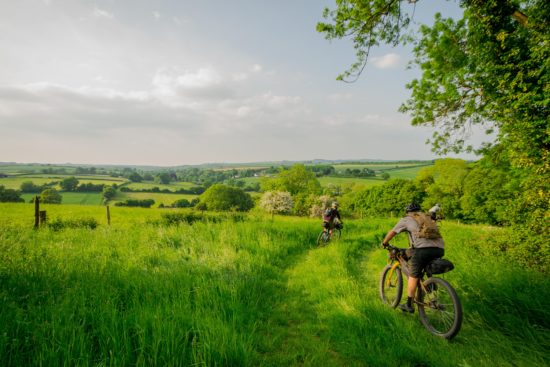 The Gravel Dash route finds its way through the most peaceful countryside imaginable. It was like riding through a chapter of Winnie-the-Pooh. Quiet. Lush. A calm breeze. Scantly placed and dubious course markings. Even if we had got lost it would be a 10km ride in any direction to the nearest pub. 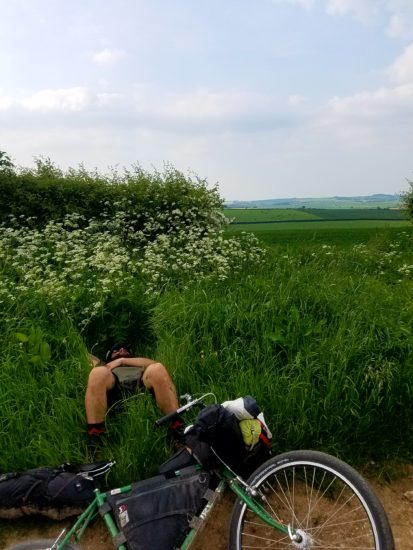 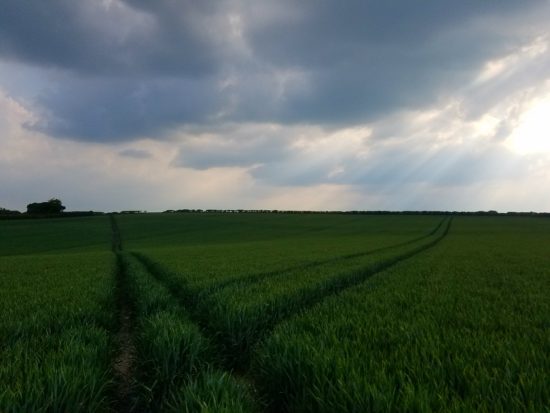 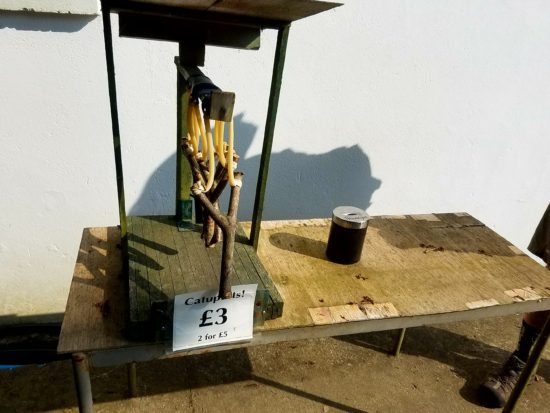 You bet your ass we bought them all.

Towards the end of day one the rain kicked in. Some of the crew opted to take the “Broom wagon of eternal shame”. Which was stocked with beer. So pretty decent accomodation as broom wagons go. But I joined up with Gil and Jason. After all the whinging from Charlie about the trail in Arizona. And the assignment of Jon the handler. I had to arrive on a bike. And we were the last ones in. Because someone had to be. And because it’s not a bloody race. Sure we could have rode faster, but at what cost? I didn’t travel 5,500 miles to pass up pubs and gin stops in green pastures. 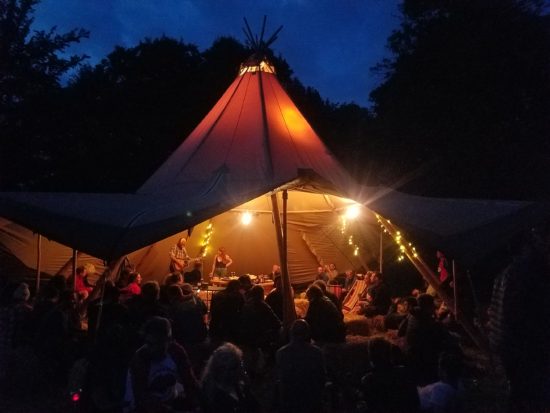 At Gravel camp there was a bar. And a kitchen. And a giant tent with a table of cheese. And live music. Charlie and his chef pal Joel run a catering outfit known as Wild Isle Kitchen. They legit forage for things like berries, mushrooms, and wild garlic. Joel had concocted this fantastic roast meal with veggies in a camp kitchen under a tent. The local scout troop was selling beer and cider for £2. It was by far the most exquisite bikepack camp I’ve ever rolled into. 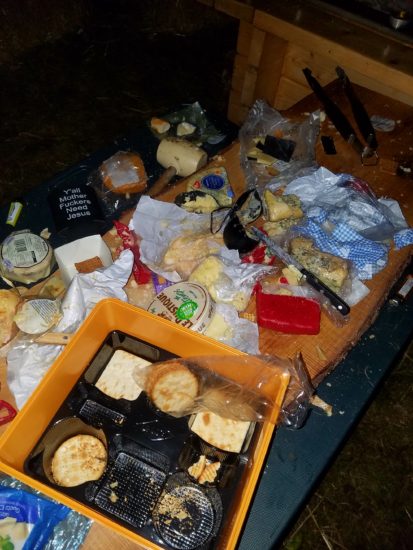 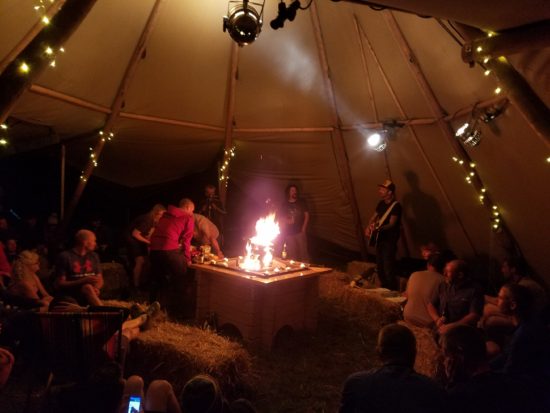 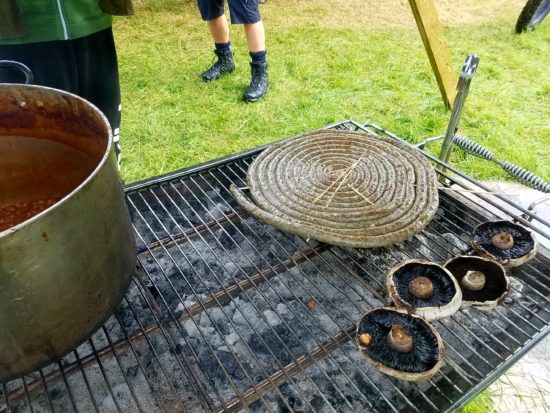 Morning came and Joel once again had this ridiculous spread of breakfast. That is indeed one giant wheel of local pork sausage.

The night before, after pouring gin and tonic #4 Jon the handler and I stood by the fire, arms on each others shoulders. We decided that maybe the next day we would skip the actual course in lieu of a Dorest pub crawl. Which would lead us back to Swanage. You’ve got to ride your own race they say. Sometimes it involves a detour to pubs. And possibly a steam train back to town if it hadn’t been Sunday. And sometimes it isn’t a race at all. 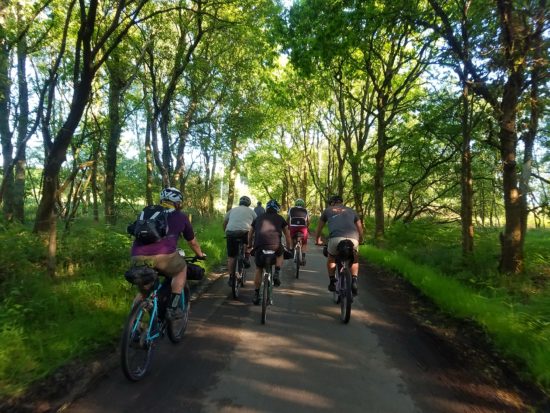 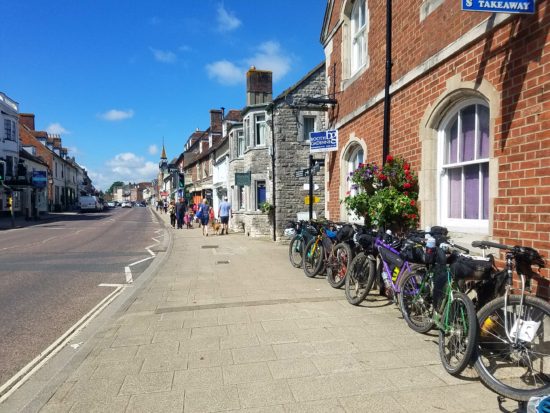 Despite all the pub gardens. And the cider festival we accidentally stopped at. Plus the riverbank we had to drink by with baskets of fish and chips. Despite all those headwinds we persevered and made it back to Swanage. Waiting there was the actual finish line and a party of course. Awards handed out and stories of the ride shared. Some bloke even ran the entire fucking thing. And faster than we rode it. Before too long Charlie was ready to stir the pot and started signing people up for the charity beer chug. A £10 donation got you a 2L das boot of ale. Timed in front of heckling crowd. I felt accomplished in my 01:24 time, and Fleck was just a split second slower. Not bad for two Colonials we were told. 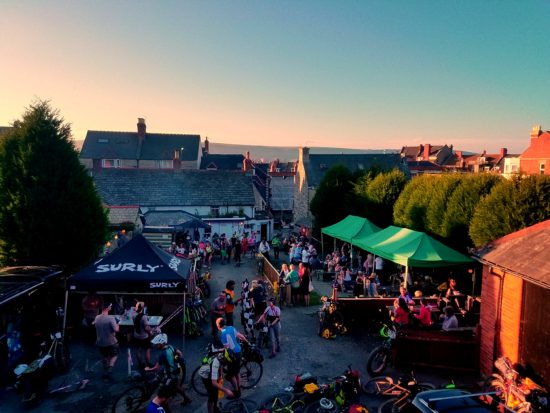 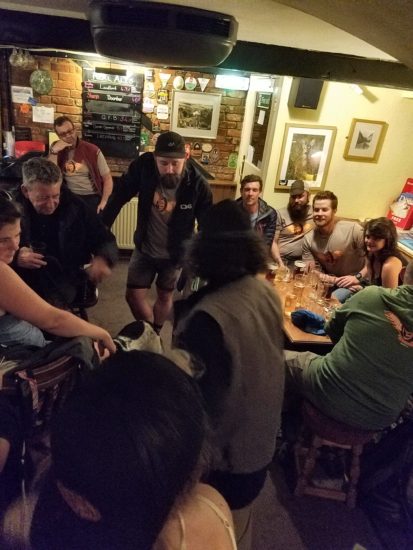 The after party bled well into the night and into the Red Lion Inn. And when the Inn had had their fill of us we took a stroll down to the waterfront. It was a pleasant nightcap to a chaotic weekend. Just a bunch of bike friends from different parts of the globe wrapping up a weekend of what makes us friends. 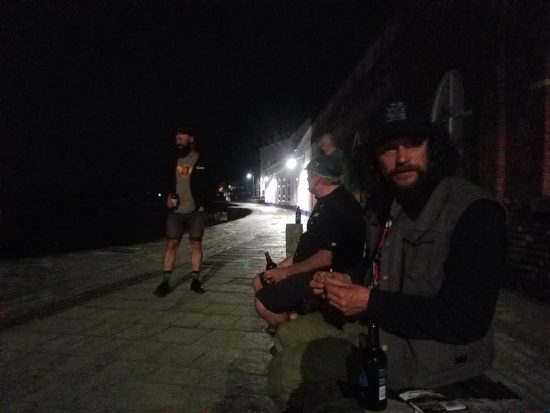 Monday was a bank holiday for the Brits so most of the Swanage kids had the day off to help show us a good time. Minimal arm twisting was done when Charlie suggested a stop at the market, then a ride up to the lighthouse to picnic by the ocean. Assortment of meats and cheeses of course, biscuits, fruits, and other weird British oddities. 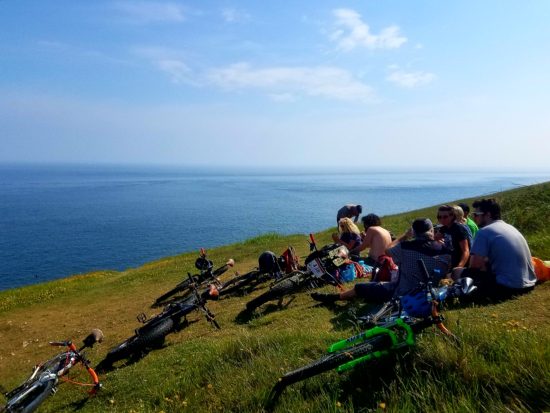 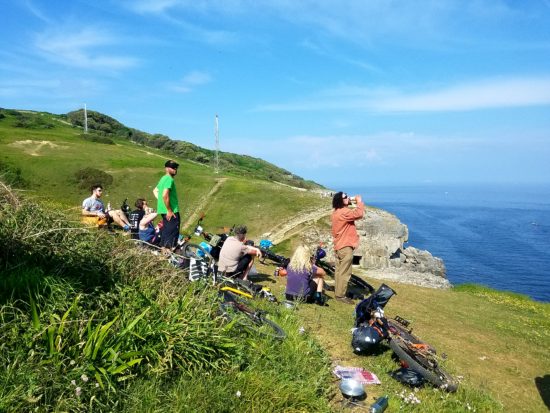 To mark our final evening in town we made another trip up the hill and through the farm gates to the Square & Compass, the greatest pub in the world. I had been hearing about this place for years. The site of many a Bikemonger story. It even has a museum of local artifacts sourced by the owner himself. It’s even near a cute little Woodhenge. 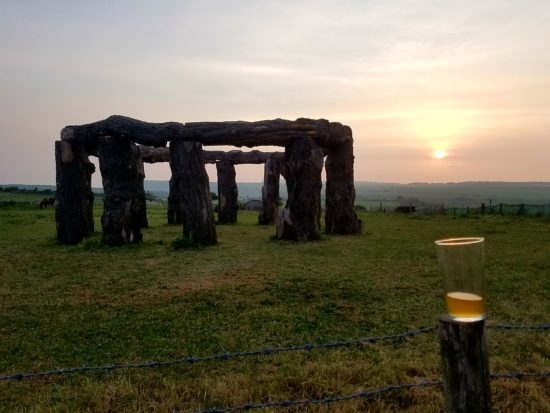 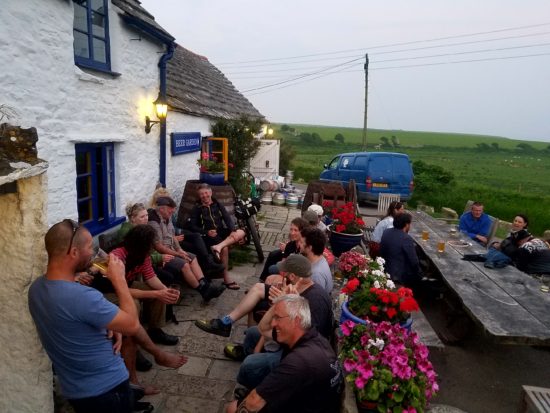 A photoshoot was necessary for some reason. 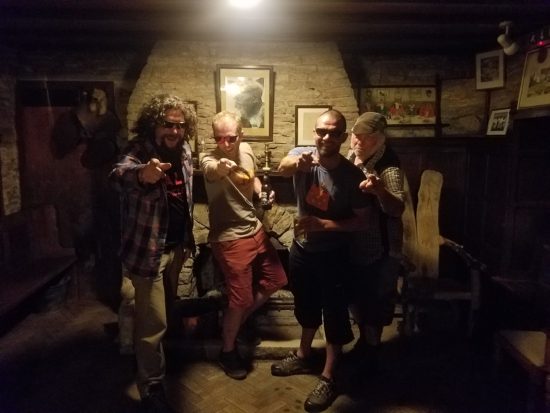 On the return trip downhill back to town Ian and Jon took to the gate relay. Leapfrogging each other from one gate to the next so the group could ride through each without stopping. However Jerome the Frenchman misjudged one. After the work that had been done back at the Square, it’s likely the gate was shifting from side to side, making it much harder to pass cleanly. It was determined that his shoulder was fucked. Charlie called the A&E, Ian and I rode down to the road to signal them up the path, Laura and Charlotte rode to the store for beer. It was quite a group effort. 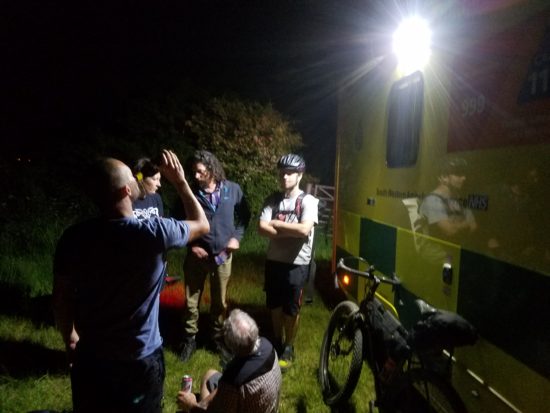 After all this it ended back at Bikemonger headquarters. Having known Charlie for 8 years now, it felt very appropriate to wrap up my visit to his corner of the world drinking lager in his shop at 4am on a Tuesday. 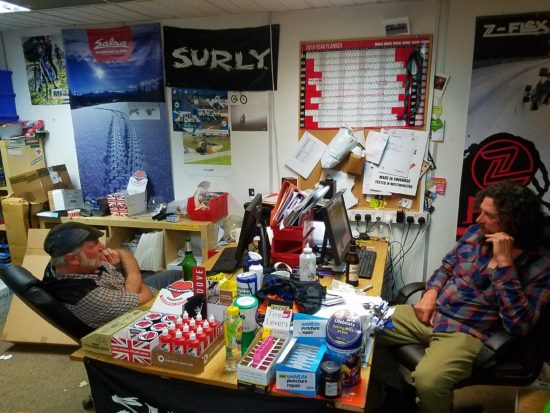 It felt good to be on the tour for once. To let others show me the good stuff. As much as I enjoyed each piece of the experience, I could see everyone else getting just as much back by showing off their local favorites. The Gravel Dash packed more British into one weekend that I ever thought possible.

Chewey and I had no plan after this. We literally sat in the Red Lion looking at train times to Belgium. Do we know anyone in Lille? We had another 5 days to burn and nowhere to go. I loved it. In the end we went back to London for a couple days while Charlie went back to real life for a bit. He said that if he could get three days work done in two, he’d meet us in Bristol and we could tour the Avon canal. So we did. 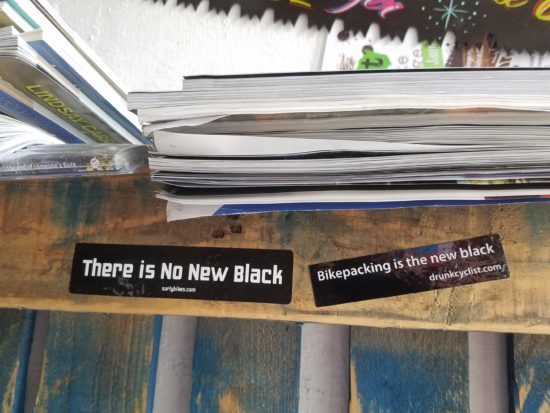 5 thoughts on “The Dorset Gravel Dash”