What’s up, world? We’re cracking open this week’s Six Pack a day late because I’ve had a cold, and had to do some #adulting yesterday that got me all hung up. This is me, making excuses. 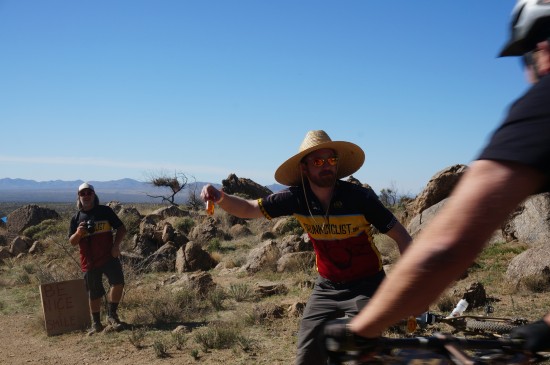 Last weekend was the 17th Annual 24 Hours in Old Pueblo mountain bike race — the largest 24-hour mountain bike event in the country, as the good folks at Epic Rides say. It’d be hard pressed to contest that claim after witnessing a steady stream of trucks, SUVs, and RVs fill Willow Springs Ranch, about an hour north of Tucson. I even saw a scrappy little Fiat ply its way up the dusty, rutted roads of the campground.

For those looking on from around outside Arizona, here’s a primer: 24HOP is more than the 17-ish mile course that flows through a cactus labyrinth. The 24-Hour Town, as the camp and expo are known, is a spectacle on its own. You could easily come for the hang and party, let alone participate in the course (which, when it was in the dark hours of the morning on Sunday, some people rode the course anyway, sans number plate). 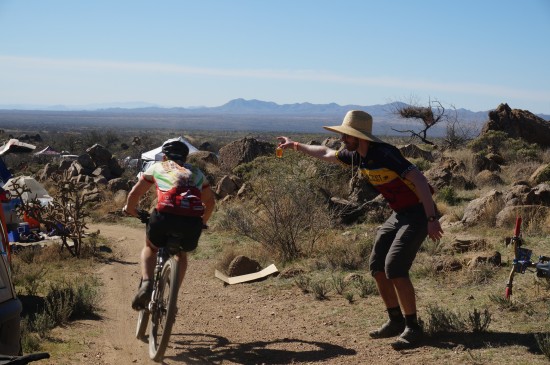 By succumbing to the whims of the desert for two nights, you find yourself stress-free, basking in the campfire glow and camaraderie of cyclists and campers alike, maybe a little buzzed, dusty and sunburnt, all grounded in the reality that there’s no quick, easy way out of 24 Hour Town except on a Life Flight helicopter (unfortunately, a couple riders who crashed were flown out). There were some folks who camped out there for weeks. I heard someone say it feels like a small-scale, MTB-focused Burning Man, but I doubt that person has even been to BM. Perhaps for the folks who’d been there more than a few days. 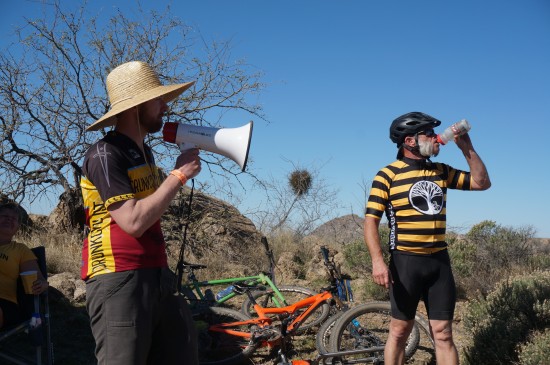 The racers who were actually in contention likely didn’t stop at the Whiskey Tree or take a handup. For the rest of us sheep, a few nips of whiskey in the desert were par for the course. And the Friday DC Beer Crit was the biggest yet.

Whiskey Tree in bloom at #24HOP. 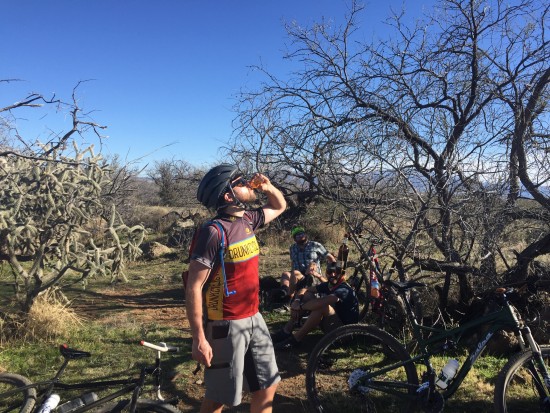 We’ll turn this guy into a longer post, but wanted throw this up while it’s still fresh.

Beer 2: Rough start to Valley of the Sun stage race

While we were in the desert at 24HOP, our roadie brethren up I-10 in Phoenix raced the Valley of the Sun last weekend. And there was a crash.

Crashing sucks, no matter what.

Beer 3: “I’d like to press fit your bottom bracket”

Yesterday on the Book we posted a link to a story about a British dating site for cyclists called Ride2Love. The post prompted some clever and equally smarmy cycling pickup lines. Good for the lads and lasses.

“I have a Specialized Body Geometry saddle. Come over and I’ll show you how well the blood circulates around my prostate.”

“Is that Stans on your face or are you just happy to see me?” (Gross, man, but well played).

And my favorite: “Sticks and stones may break my bones, but chainwhips excite me”

I like the way you move that free hub body.

This week in stupid…

Let’s get serious for a second. There’s a State Rep. in Missouri, Jay Houghton, who gained brief notoriety among the cycling community for proposing that all cyclists have a 15-foot tall fluorescent flag attached to their bikes. It’d look a little something like this:

@cyclelicious — the folks @StlBicycleWorks made a 15′ pole today to show ridiculousness of MO bill. pic.twitter.com/FAjeCB0XvV

I just…sigh. It’s a ridiculous proposition, considering the clearance issues for power lines, trees, and bridges. Not to mention there’s no suggestion of what the funding source would be for said flags, what the specs are, and on and on. Pelotons of flags!

Here’s Houghton’s reasoning for the bill:

But, wait! It gets better!

The same Rep. Houghton is proposing a bill that would allow ATVs (all terrain vehicles) and golf carts used by the disabled, or those over 55, on the 238-mile long Katy Trail on the first and third Wednesdays of the month. The Katy Trail runs east-west across Missouri, from roughly St. Louis to about 80 miles from Kansas City. More, from the Biking Bis blog:

According to the Missouri Bicycle and Pedestrian Foundation, the research division of the Missouri legislature said the trail isn’t wide enough for two golf carts to pass each other and needs widening to 14 feet. The cost for a new base, ballast and surface, if contracted out, would be about $168,000 per mile … This does not include what it would cost to modify our bridge decks.”

Dirty could tell you all about it. He rode the Katy Trail this summer on his tour from Oskar Blues’s Colorado brewery to the new mothership in N.C.

Come on, Missouri. We’re counting on you. Don’t be the Donald Trump of states.

Last weekend, Jan 31st, 2016. The RidersGottaRide crew went up to Rays MTB in Cleveland, OH to host the King of Rythm (sic) and help with Rookie of the Year. Danny Rumple came along and we decided to raise money to see him flip the Tree box jump in the Rythm (sic) room. The Tree box is one of the longest box’s in the room, and when Danny went for it disaster struck!

Beer 6: What a wonderful world

Let’s wrap this Sixer on a positive note. If you’re like me, you still think earth is just a sphere of shit flying through space. But here’s a tale to the contrary.

Stephen Fabes, a junior doctor from London, has spent six years cycling round the world. He has slept in schools, in police stations, in churches, mosques, monasteries and in army barracks – and thinks the world is a much better place than we are led to believe.

As someone who’s done a good bit of touring, despite my cynical philosophy on most things, I have to agree. When you’re on two wheels, it ain’t so bad out there. I’ve been on the receiving end of places to stay and cold beers when I least expected it. Dirty and others around these could tell you the same.

So when you pedal on down to the bar this weekend (or this afternoon), buy your pal a round. Be the better man or woman and flick some cosmic generosity dust into the ether. Maybe they’ll pay it forward.