The hangover haze is starting to clear from Single Speed AZ last weekend, held right here in Tucson. Between that and 24HOP coming up this weekend, it’s a little chaotic around here. And it’s all in the name of having a hoot on two wheels.

Next week we’re slating for heavy coverage from 24HOP, so as this week’s Firestone-Walker inspired Six Pack goes down, we’re hitting you quick, hard and fast with a few tasty bits from the Interwebs. Enjoy.

This past weekend was the annual Single Speed AZ race, which is the unruly clash of the gearless, beerless fearless. Maybe not beerless, but it completed the series of that last sentence well, so deal with it. My MTB was out of commission because I cracked my hub at Sweetwater Preserve in Tucson with Cupcake a few weeks ago, so I rode my SSCX rig up Redington Road to the aid station. Throughout a sunbaked afternoon, the crazies came through for refreshments. Thanks to our homies for throwing a heckuva party.

Here’s a weird video we shot, taken from a bottle of Old Grand-Dad’s POV:

And let’s not forget Reverend Dick, whose crank arm fell off his Pugsley at some point. Fortunately for he and I, we made it to the after party early and got started accordingly:

Beer 2: Woman in the Rad dress

Now, this ain’t new, but it’s new to us, and probably you, too. Behold, the Woman in the Rad Dress. 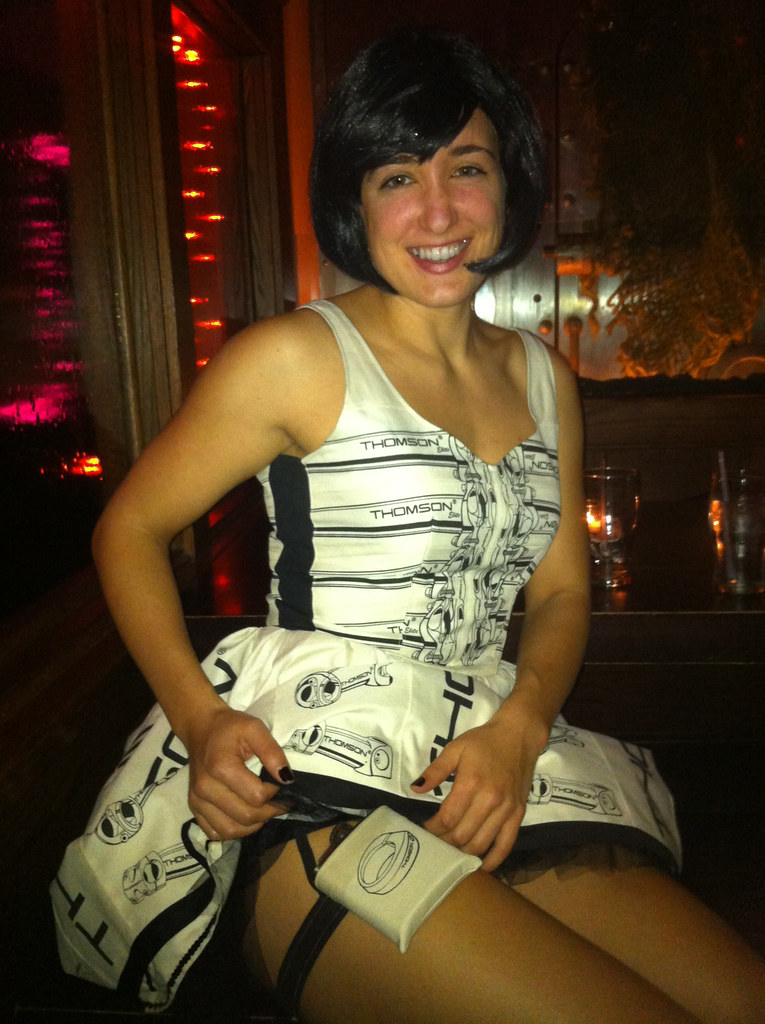 We came across Katy Steudel on Instagram a couple weeks ago when we reposted one of Thomson’s pics. Someone brought her up in the comments, as Instagrammers do. So we messaged her and got some intel on her sartorial creations. 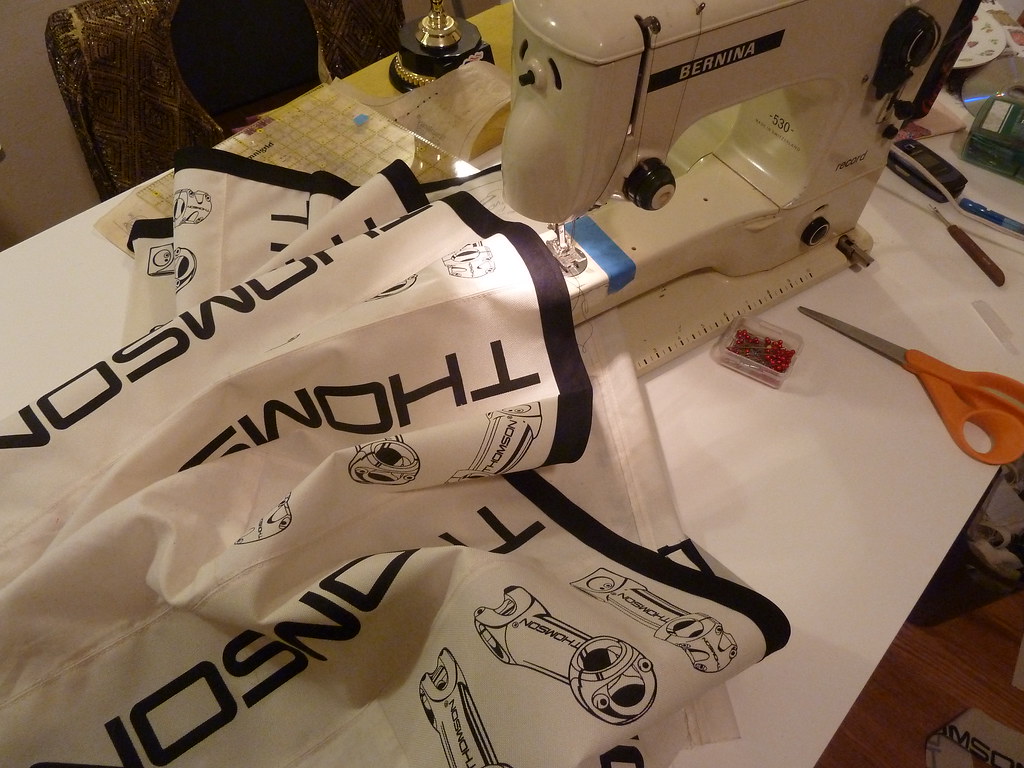 She made the Thomson component bag dress back in 2012 (full deets on her blog). It took a couple weeks, 16 Thomson seat post bags, 9 stem bags and 1 seat post collar bag. Katy had been collecting them for years. Once she determined the pattern she wanted, she was short a few seat post bags. She says the hardest part was figuring out how to sew a dress. “I hadn’t done a dress pattern before,” which, she notes, is relatively simple. Originally from Wisconsin, Katy is now a mountain bike graphic designer for Cannondale in Connecticut.

Good on ya, Katy.

Beer 3: Winning the Super Bowl is great, but…

… going for a bike ride whenever you want, on some real nice bikes, is even better.

Great ride with @life_at_elevation! Love playing around on the bike and as an athlete I love pushing limits and being competitive. @srammtb #allforone I go big. What do you think happened with my shock? @rockshox I love the bike and seeing what all it could do.

Kudos to David Bruton, Jr., a safety for the Denver Broncos, who won the #SportsBall championship last Sunday. Even though he didn’t play because of a broken leg, he can still rightfully kiss that Lombardi trophy whenever he damn well pleases.

Why Bruton? He’s been a recent media darling — or anomaly —because he’s an NFL player who’s an outspoken cyclist. Dude likes to shred: road, MTB, he doesn’t care. He already plans to get into the riding scene competitively one day, and I hope to never have to race him.

For a nifty profile on Bruton, check this vid from Denver’s NBC affiliate.

Note: We had an auto-playing video embedded here previously. We weren’t sure if it was annoying, but this email today confirmed it:

it is really damned annoying going to a web page and having some video you can’t even tell where it is, start playing automatically. It’s a completely aggravating voice coming from *somewhere* and when you can’t see the friggin video itself, it is USELESS ANYWAY. Like those stupid mouseover ads they intentionally put on the right that start playing some fucking voice when you move your mouse out of the way to see the main content. When I hear a video playing and I can’t see where the hell the sound is coming from, I just leave the damn website never to return. Not to mention that distracting POS animated gif on this page for some stupid epicrides registation. I BOYCOTT companies that force their fucking advertising on me like this. Shit website.

So we removed it. But we don’t get the swipe at Epic Rides. Sounds like our commenter was pissed off about some other pressing business. Or, perhaps she wakes up everyday as a boiling cauldron of torment. We hope her day goes better. Really. Thanks for the click.

I’m just kidding, by the way. Winning the Super Bowl would be dope AF.

Back in December, the world’s best road cycling team, Etixx-Quick-Step, which names Dutchman Niki Terpstra (who won the last two years), and other winners, was effectively disinvited from the Tour of Qatar.

The reasons? Yes, there are more than one. For one, disrespecting a female race employee. But the best reason, of course: taking too long to change.

From the good folks at Velo News:

[Sheikh Khalid Bin Ali Al Thani, president of Qatar’s cycling federation] said Etixx-Quick-Step’s problems have gone on for years. The most common problems, he said, involved the delay of the podium presentation.

“They’d take too much time changing their shoes, sitting around, and then meeting the press while keeping us waiting,” Al-Thani said. “They can’t do that. Then there were some problems with hotels, discipline… things.”

Schadenfreude is delicious. Maybe if they wore a dress made from Thomson bags, they’d podium up a bit quicker…(Ohhhhhhhhhhh SNAP!)

No, not us. Since politics is in the air, we thought we’d plug a new chill ride, one big hot lap around Washington, D.C., where you can take in the sights. In May, the D.C. Bike Ride will cruise 17 miles around the capital of ‘Murica, not all unlike NYC’s Five Boroughs tour.

@nwrighteous is going coast to coast, but not before a DC rager in the Oval Office.

While there were a couple different iterations of such casual rides in the 1990s and early 2000s, D.C. Bike Ride will be the first time a ride of this size — organizers expect about 8,000 riders in its first year, with as many as 18,000 in future years — has been attempted in the District.

“Most of the other events of this scale are for the racing, competitive communities,” said Greg Billing of Washington Area Bicycle Association. “This is really focused on people who may not feel comfortable riding around D.C. streets day in and day out.”

Which presidential candidate is most likely to make an appearance? I’ll say none. Good. It’d ruin the ride, anyway.

And since the 24 Hours of Old Pueblo is upon us, our sixth item is a shameless plug. See you in the OP!