Top of November to ya.

If you’re new to this, which you might could be since there’s only been one other post, this is No. 2 of a handful of stories that gives a nod to the unsuspecting hovels, dives and dens of iniquity across the United States where, if you sniff around and find the right person, the cold beers will materialize. And sometimes, they cost nothin’. Of course, you need to roll in a bike to do this. These are places I found while touring across the country this past summer, from Virginia to California.

Now, in this second installment of my Beer Fairies of the Western Express saga, I’m about to spit some history. Maybe get a little Huck Finn on you.

To the banks of the Ohio River we go.

After spending the afternoon at Against the Grain, the brewpub attached to the Louisville Slugger Field that’s so well-stocked you can’t tell what came first—the baseball bats or the beer—my riding compadre John and I decided to get back on the road. Bloated with beer, bourbon and barbecue, we pedaled up and over the Big Four Railroad Bridge back into the state with America’s weirdest alcohol laws: Indiana. 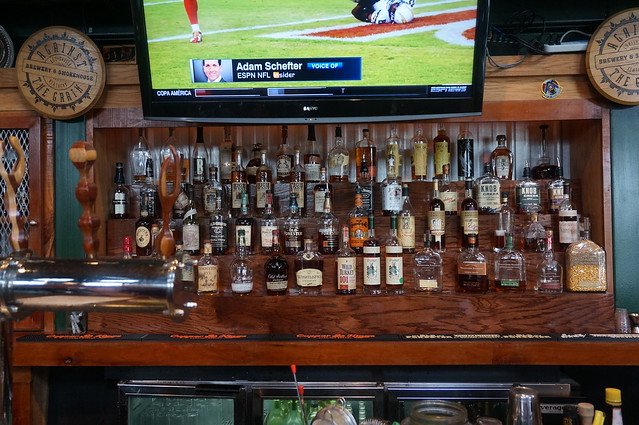 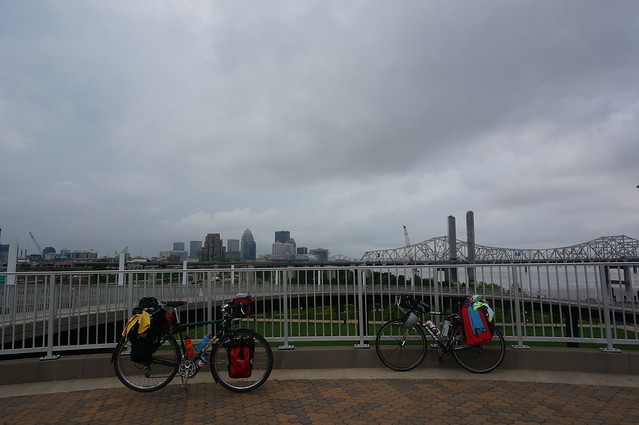 My compadre, John, a bartender from Columbus, Ohio, and I headed deeper into southern Indiana, our route yo-yoing along the Ohio River depending on what topography felt like doing. In Corydon, Indiana, which used to be the capital before Indy, we hit up Point Break Brewing for a pick me up IPA before pointing our bikes south and heading straight back to the Ohio.

The last 17 miles along Heidelberg Road were a couple notches above a gravel B road. Rolling Midwest farm roads, nothing special. The kind of landscapes that Normal Rockwell would’ve considered, but passed up for more idyllic, pastoral ones.

We stupidly tried to evade a few farm dogs that gave chase and handily caught us (beer+adrenaline = you’re not as fast as you think you are; plus, loaded touring bikes). As July 4th eve set in, we couldn’t tell if we were hearing fireworks or rifles popping from the trees, but either way, America. Fuck yeah.

Brandenburg, Kentucky, was the destination. We weren’t sure where to stay. Not a new situation. Campsites we sure to be full on a holiday weekend, but somehow, some way, we always found a place. At the bottom of the last sharp descent into the Ohio River valley, the road hit a T in what appeared, uh, to be a village. No. More like a hamlet. A crumbled brick storefront greeted us. Next to that, an empty lot. And then a bar across the street from a municipal garage. 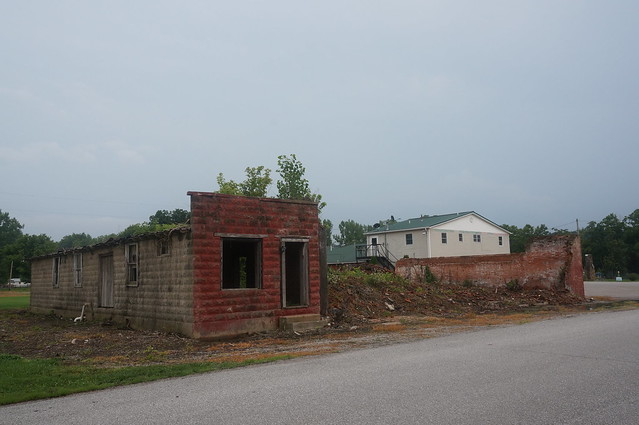 John and I stopped, sizing up the place, looking around for the best way to the bridge over to Kentucky. Looking over one shoulder and the next, I saw a sign in front of a mobile home: River Side Camp Sites. Behind it, an empty green lawn dotted with RV hookups stretched against the banks of the river. No one was there, even on this 4th of July weekend. But, hey, if the good old Midwestern lass perched atop the trailer out front was any indication, it was worth poking around. Like an Ohio River siren, luring in unsuspecting drunkcyclists and river rats. I see what you’re after. Alright, I’ll play into your hands, lady. 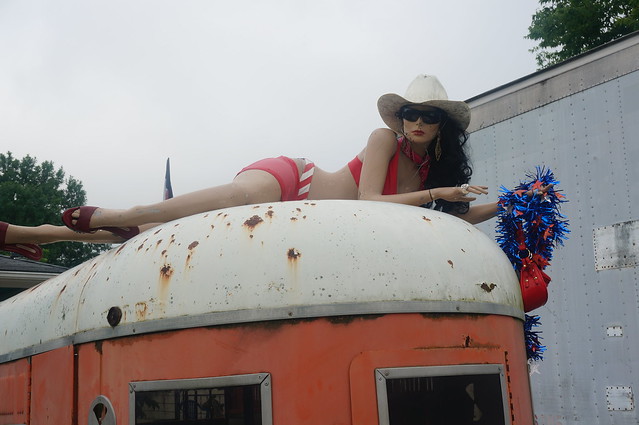 Before I made it to the trailer’s front door, Perry popped out. He was a thin slip of a guy in a faded hoodie and baseball cap who was already lighting a cigarette before the screen door closed behind him.

“H’Sup, fellas?” with a twang I couldn’t quite nail down. Texas? Kentucky? Arkansas? We asked about camping. “What ya got?” Perry asked, looking for something behind us. “Camper?”

We explained we had bikes. “Oh, you towin’?” Bicycles and tents. “Oh. Whoa-hmmm. I don’t think Miss Holly will go for tents, but I’mma ask’er,” he said.

John and I looked at each other, bewildered that there could possibly be an objection to something that wasn’t an RV, given how little space we needed at an RV park that appeared completely vacant, as Perry disappeared back inside. Perry returned, obsequiously holding open the door for an imposing, handsome woman whose blonde hair was piled into a beehive. She threw up her hands with a cigarette in one.

“Tents?” Yep, we said, and invited them to look at our bikes. She asked where we’d go to the bathroom, on account of our not having RVs to piss and shit in, then carry it around in a tank. We said, uh, we’d wait for the bar to open? We offered her money to stay, and after seeing our bikes weren’t motorcycles, she objected to the thought.

“You kidding me?” We were staying the night for free. “Y’all come on over to the bar when you’re set up. Have some food and some beers! DJ comes on at 10!”

At the other end of the park was an abandoned camper underneath a shelter, but that’s where the running water was. It was just a few steps from the Ohio River. We could make out the line where the grass gave up regrowing against repeated floodings. There was just mud. As John and I set up our tents, we watched a barge head downstream. The damn thing had to have been a half-mile long, loaded with piles of black ore. 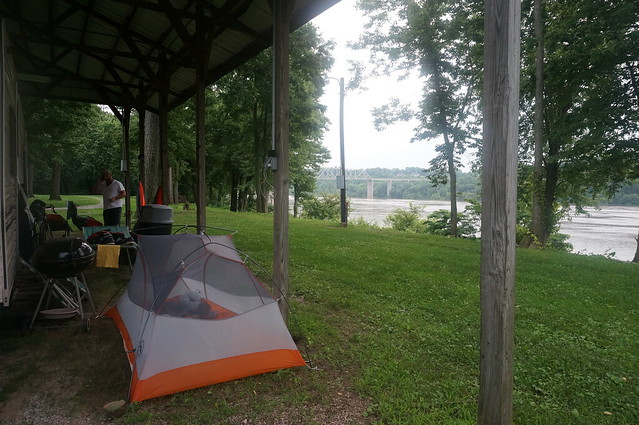 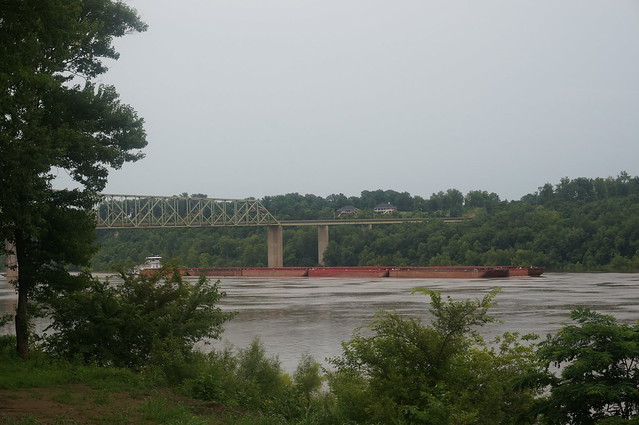 John and I got all reflective. That’s the thing about the Ohio River. It’s not a clear, mountain-fed stream to splash around in, or an aspirational place to own adjacent land. It’s a serious, not-fucking-around kind of river. Especially when we were there, it had just crested after swelling from weeks of heavy rain. The current carries logs, old boats and other debris toward the Mississippi, and it doesn’t give a shit what’s in the way. If you had the misfortune of ending up in the river and hadn’t drowned yet, you could bank on a tree coming by and finishing the job. It’s a highway you don’t want to run across. Barges inched up and down every hour or so, lit up with beacon lights, commanding a mutual respect with the water. A working river.

As we set up our tents, Perry made his way across the campsite toward us. “Hey guys, we’re ‘bout to hook y’all up if you want.” He explained there was an apartment above the bar, which I interpreted as the drunk tank, where we could shower and crash for the night if we wanted to. John and I said we’d think about it, and thanked him. When Perry wandered off, John and I figured on a Friday night, we wouldn’t sleep above a bar. But a shower sounded nice. With camp set up, John and I walked over to the River Bottom Inn, the one establishment in town. At that point, we noticed we didn’t know what the town was called. A banner draped across the bar’s broadside read, “Mauckport, Indiana.” 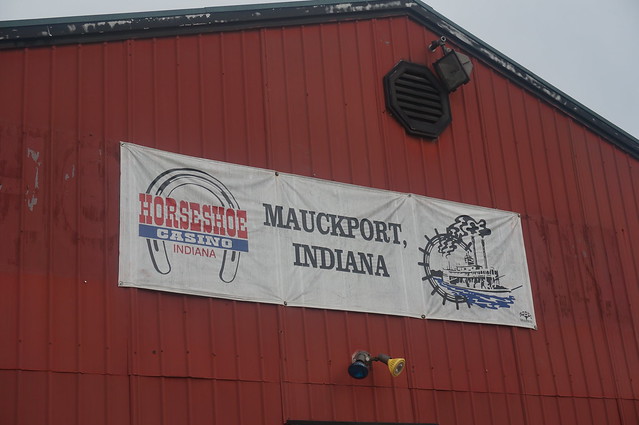 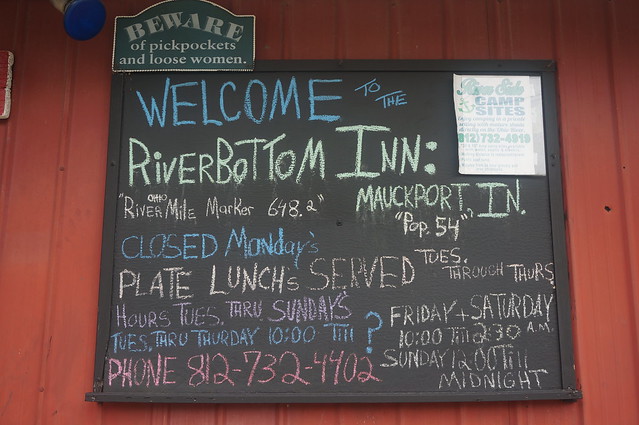 Inside the smoke-filled, quiet bar, Perry sat on a barstool at the door. Waved us toward the bar, where we sat next to a couple and another guy who, if I guessed, was a truck driver.

Suzanne the bartender came over. “You’re the bikers, yeah?” We nodded, and she handed us an envelope. It read, “For the Guys.” Inside were a few old bar flyers with kitschy caricatures of waitresses that Midwestern moms would find funny, one with a text bubble reading “Are y’all ready to order, or do you need a couple more minutes to stare at my big hair?”

In the margin, a handwritten note from Holly at the RV park: “Thank you and good luck – we never get any excitement, and I grew up in the big city. I also have a Facebook page.” Her card, paper-clipped to the flyer, said Holly Kingsley. Owner of the River Bottom Inn. And the RV park. And also a councilwoman, we learned.

Suzanne the bartender brought us rounds of High Lifes, a few shots of Wild Turkey, and fried cod sandwiches with fries. She was nostalgically pretty, like Sloane Peterson in Ferris Bueller’s Day Off—and somehow “the lord blessed me” because she had five kids and still looked 35. When we told her about our trip, she said a couple guys from Virginia were canoeing down the Ohio River and had stopped in Mauckport, camped at the RV park like we were. No shit. I wondered if they were still alive.

Suzanne lived across the river in Brandenburg, as did many of the patrons. On the weekends, the River Bottom Inn got bumpin’ after midnight, when the bars in Kentucky closed. Then, a stream of coal rollin’ pickups headed over the bridge and partied two more hours. We weren’t sure if we’d make it that long, at our going rate of whiskey intake.

“Didja know that until about 10 years ago, it was illegal for a single woman to sit at a bar unaccompanied in Indiana?” Suzanne said, flipping a coupe coasters at us like a casino dealer.

After we ate, Perry showed me the apartment above the bar so I could shower. NASCAR posters adorned the walls—but, like, tastefully. They were centered and aligned with other posters, including a Jenny McCarthy one from the 90s. On one wall was a big navy Commonwealth of Kentucky flag, as though this pad was a secret hideout for the Kentuckians to infiltrate Indiana, should the need arise. At one time, it did.

Back down in the bar, billiards balls clashed and beer cans cracked open. I sat down in the middle of Suzanne explaining how Mauckport was the site of Indiana’s only Civil War battle, a Confederate artillery raid, and how the town got wiped out in the 30s from a flood. This is the town I imagine Neil Young is singing about in “Revolution Blues.” Mauckport’s story has been one of steady decline. At least until midnight when the population of 54 doubled every Friday and Saturday night.

John and I got a couple rounds of pool in, one of many we’d duke out at random bars across the country. We batted the 8 ball around until 12:30 when the Kentuckians showed up.

“Yippie kay-yay, Fahriday!” announced the first guy, followed by a coterie of holiday-drunk women, more guys. Because we’d been drinking since 1 p.m. beginning in Louisville, I’d about had it. We’d never go to bed, and I didn’t want drunkos knowing that I was camped out across the street. Being fucked with by drunk locals is not fun when you’re in a tent.

John and I went to settle up, expecting at least a $50 tab. Suzanne asked for $25, and said she took care of a couple ‘our rounds. It’s one thing to show gratitude for a free place to stay and shower. Tack on half a bar tab? For what, because we showed up?

They hoped we’d tell people down the road nice things about Mauckport.

6 thoughts on “Bottoms up at the River Bottom Inn”