We’ve often mentioned that February is usually the busiest month on our bike calendar for the year. The weather is phenomenal and friends are visiting, SingleSpeed Arizona kicks off the party, and then 24 Hours of Old Pueblo brings all the friends together again. This year we invited a special friend from England to our big show. Charlie the Bikemonger. We’ve got a rowdy history with Mr. Bikemonger, as you’ll soon discover. So we lured him to the desert with tales of cacti, Mexican food, surfing, real whiskey, and killer trails.

As this was Charlie’s first journey to America, I asked him to recap his experience. What follows is the Bikemonger’s photo essay of his experience. Be sure to read this with your best southern English accent….

Wind it back a few years… These two damp tired yanks pulls up on their bikes at SSWC Ireland, they adopt us Brits because we have whisky, wine, tobacco of sorts, and shelter… It’s pissing it down. We get on real well. Go forward a year or two… So, I get this damned stupid Facebook message from Dirty at drunk cyclist.. “Hey buddy are you coming to Alaska for the world champs, got a place to stay?”  Hell no, Alaska is the other side of the bloody world, and if I’m going to Alaska for a drunk weekend, it will be for months… Into the wild stuff, you know what I mean.  So I declined.

“Hey, we are doing a ride near you soon, wanna come” now that sounds reasonable, so I agreed. “Count me in, where are we going?”… and then the reply…. “We are riding across Iceland, that’s kinda near you, Bitch”. Damn those canny colonial chaps, called me bitch, so I had to go. But that is another story. However whilst sat in a volcanic spring with single malt and re-hydrated beer, in Iceland, dodging volcanoes and earthquakes, and even bloody hurricanes, they told me about SSAZ, their home town, and the 24 hours of old El Pablo (or something like that). And I must say it all sounded warmer than Iceland.

Well, surviving Iceland with Jesus and Dirty, I came to trust these two deviants, and within a few hundred days I was at one of the London airports with a bike that had no frame, and a rare mini Simmons surfboard. I’ve never been to the American colonies before, but I’ve been a skater since 1977, I love Ween and the Dead Kennedys, and I’ve never met an arsehole American (yeah I know, what’s the chances of that?) … So here we go. Bring it on.

You know chickpeas, and lentils… What’s the difference between a chickpea and a lentil?

Picked up at Phoenix and the whole place, even the airport is really fucking American. Everything looks just like the movies, and their customs guys are hard bitches. 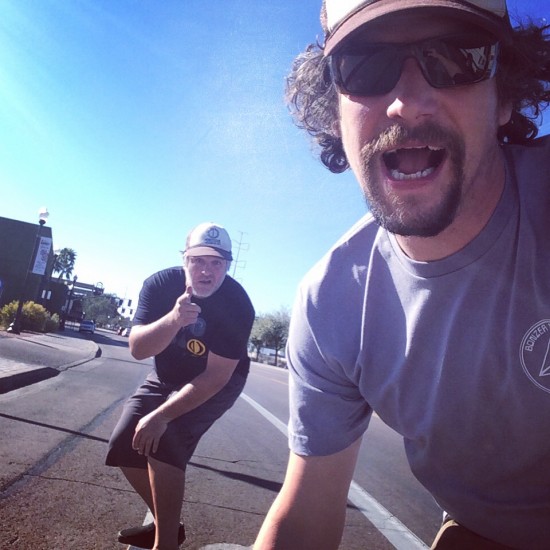 Beer, Jesus’ house, Chewy and Spinner, Kerry and the others. That Pale Verde bar, it’s 8am UK time I am on the Tijuana hookers (it’s a drink you know), sofa as a bed. Sara has the nicest presentation of “good morning”. That is not prison slang, she just says the best “good morning” ever.

Pickup truck takes me to SSAZ, in some weird cowboy town with an awesome bike shop. My new titanium vassago 29+ frame is waiting for me, so I start building with help from Tom, Paul (components chap) and a great guy from Niner. All brands I have backed over here in the UK. Building a bike under an illuminated bar sign, in the desert, is not something you get to do often in the UK, I think I might like this place. Beer, cakes, probably some food… And then Teleported in a u-haul to some desert for fire, whisky and sleep. Man, sleeping in the back of a pick up truck, it’s ace, you can’t do that in England, you would drown.

SSAZ was incredible. Dirty has resurrected a great mountain trail…. Mile after mile of remote crazy rock gardens, bitching heat and no puddles. Stayed focused, kept an eye on my water, played it cool, did alright. They don’t have mud out here, just dry dust, it’s just like that one day a year we get in England when we can ditch our waterproofs. Awesome race… I totally won the single speed European offshore championships (I was the only euro there). Met a great gold toothed hermit, drank beer, and didn’t die. Then music, excellent thrash band in a sort of cattle shed behind the Flat Tyre bike shop. kaolin the bike shop overlord, what a guy, I need to hang around guys like this, just so it makes me look respectable. 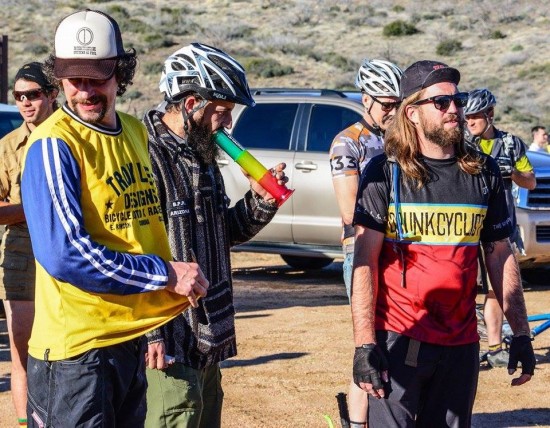 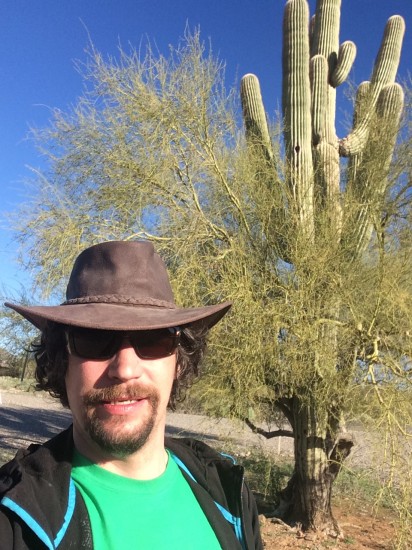 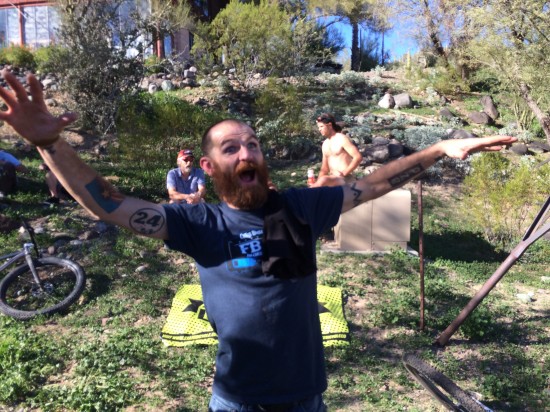 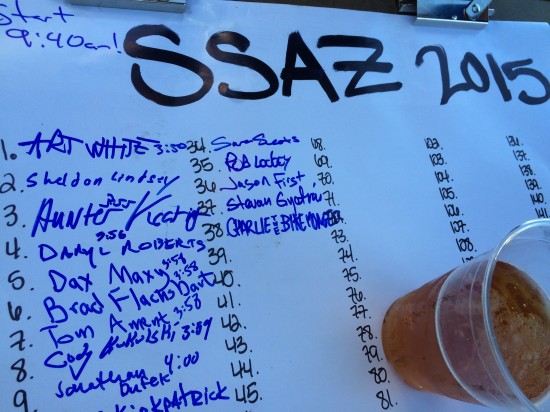 Jules from surly almost pissed in her camel back….

I recall gunned up sheriffs and fire.

Next up was a great big road trip blag to Baja Mexico… Seafood, machine guns, chili, surfing, weird Mexican wine, more fish, beer, remote desert surf, dust roads, and I bought an awesome poncho. I could bang on about this leg of the business trip for a thousand words, but it would get on your tits, because it was just brilliant and you weren’t there. But I must tell you that beer bloody Mary’s with chilies and beef jerky are a frequent morning snack in my bike shop now. 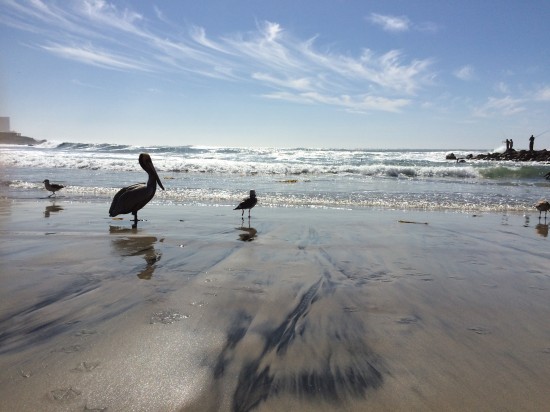 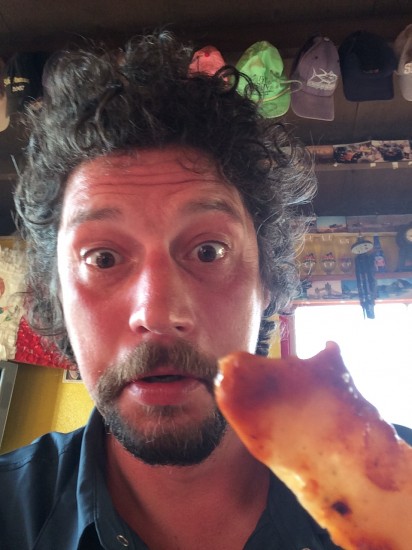 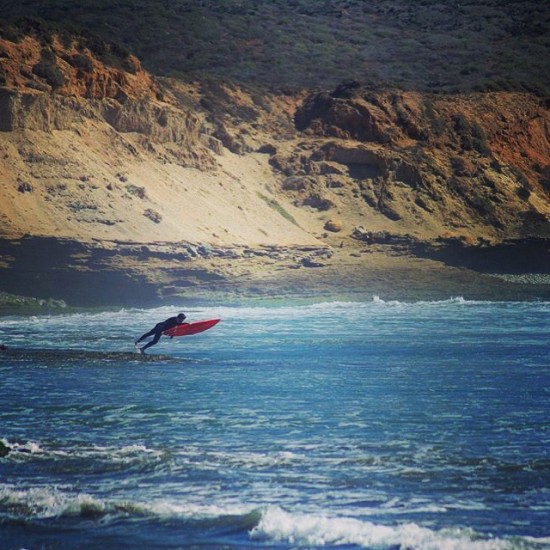 Back to AZ, and off to the 24 hour race. What a scene, everyone was there, and the course was so flowing. The right honourable righteous bastards at “back of the pack racing” set up a camp that is better than my house. We had kegs of beer, food, music, chairs, TV and constant coffee. 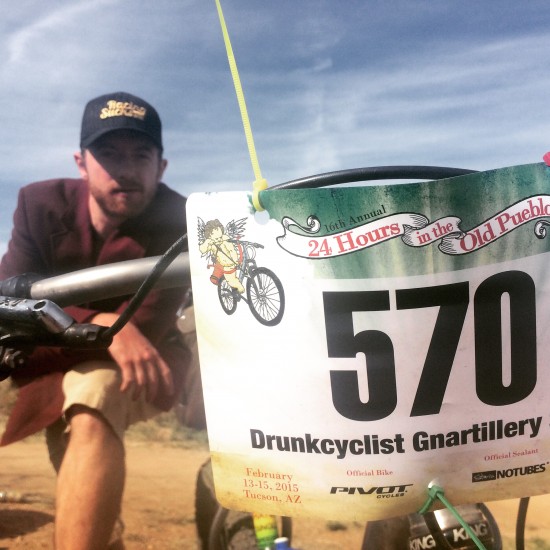 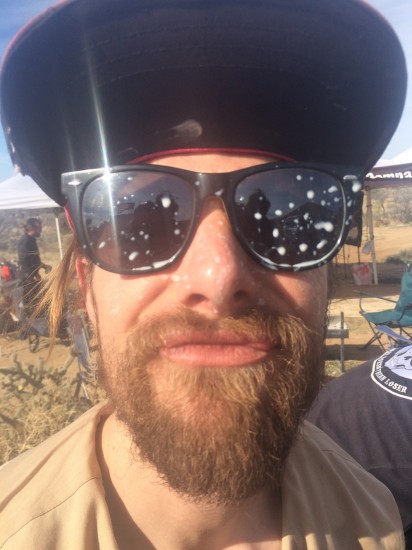 Before the race a quick roll down to another whisky tree (sorry forgot to mention the SSAZ race had a whisky tree). Hold on I’m out of sequence now… Screw it… Anyway. Jesus and I are rolling the tail end of the course heading to the start. I’m following him and I spot something in my peripheral vision… A fucking great rattle snake, Jesus had scared it, and now it was pissed off. I skidded out, lay the bike down about 4 foot away and ran like fuck in the opposite direction.  I flapped around like an idiot. I found Dirty and told him, he returned with a snake grabbing pole and a dustbin and went snake hunting. That is not normal. In England we have one poisonous snake and no one ever dies. We have a king, proper castles, taxes… And you guys in America are at least 200 years overdue on your taxes… But we don’t have anything that will kill you… Other than football fans and a really high fat diet.

What happened next… I’m not sure. There was some racing, and more bars. And then I went to visit the freezing northern colonies of Minnesota. I went from a lovely 30°c (that’s European temperature for “nice”) to -25°c (that is beard freezing and scary) in a single day. My remote family at Surly looked after me in fine style, made new friends at 45NRTH and actually did some real business stuff. The QBP gang made a freezing wasteland a welcoming and fun freezing wasteland… But a great big part of my heart (probably the bit bunged up with cholesterol and chile) will always be in AZ. 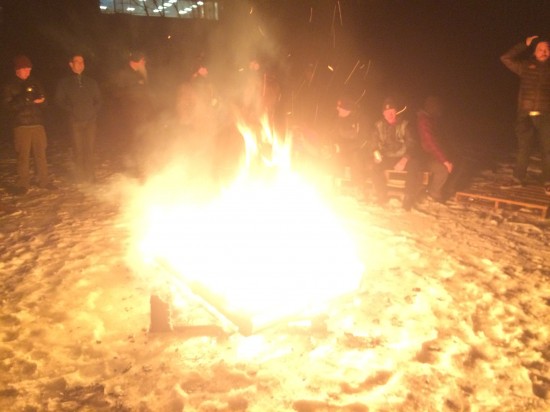 Oh, yeah… Chickpea and lentil… What the difference between Chickpeas and lentils???

p.s. ~ Hey Charlie, Arizona was a Territory, not a Colony. Good luck getting your taxes.