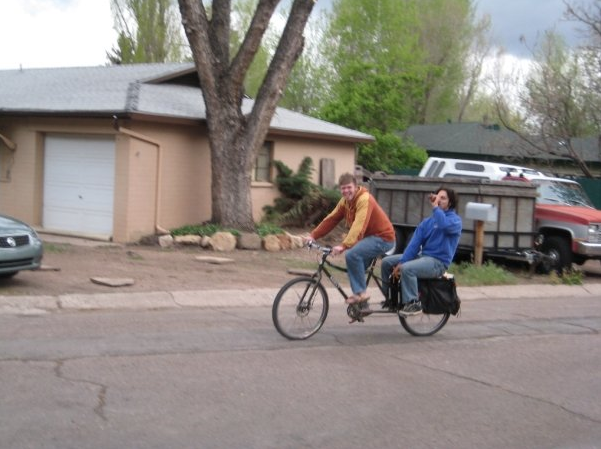 ( A BRIEF NOTE about the photo: I couldn’t find the pic I wanted to post of me actually racing a bicycle. It was a specific photo. So in its place is me in my element: drinking a beer on the back of someone else’s bike.)

“Just hang onto my wheel.”

I’ve heard that so many times in my life. Just hang on. Follow me. Stay with me and you’ll be fine. Keep pushing, just keep up. One time, I heard it in a race. A friend, Corey, said it to me. “Just hang onto my wheel. Don’t stop pedaling.” I had shouted up to him that my legs were cramping and I was going to fall off, just disappear. He wouldn’t let me; keep pushing. We’re almost done. We weren’t actually almost done with the race, but how the hell would I know? There aren’t any windows in the pain cave.

As it turned out, I won the race.

Well, my age group anyway. Corey had pulled me to a win. He didn’t have to, but he did. He wanted to see me win as much as I did. Why? Who really knows. The good ones among us, we want to see others succeed for the same reason we like a good movie: the plot is engaging. For me, I stood on the top of a podium and it was great. I smiled, I took my prize, I shook hands. But really, it was Corey’s win…and when I thought about it, that was even better.

The process became very intriguing to me after that. I was poor, I was a kid, I had a bike and I had no direction. What better place to work it all out than on mountain bike race courses in Arizona? Winning wasn’t something I did often; since then, I’ve learned that I’m something of a whiner, so the long-haul never makes sense to me. About halfway through, I start to question the existential value of suffering for a silly medal or worse: a pair of crocs, or brake pads that don’t work with the brakes I have. Once, after a particularly grueling 24-hour race, in which I came in tenth place, my mother asked me, “Why do you do this to yourself? What do you get out of it?”

Let me be very clear: that does not translate to other areas of my life. I’ve had to take the 24-hour race of every single facet of my being, from the working world to personal relationships, to simply going to the store to buy avocados. There is no correlation. You can win every race on dirt and lose at everything else, so you have to ask yourself what matters more. The idea of winning, or the idea of trying.

One day, several months after Corey pulled me to a win in a mountain bike race outside Flagstaff, Arizona, I decided to do something stupid. This was something I was quite adept at: making bad decisions. I did this often, with great success. In this case, I decided to take part in a mountain bike race on a Saturday, followed by a road crit on Sunday.

Number of mountain bike races I had done up until this point: 25+.

Number of road races I had done up until this point: 1.

Number of crits I had done up until this point: 0.

I’m not good at math, but that doesn’t sound too goddamn good.

Corey was there for the mountain bike race but he was not taking part in the road race. I finished DFL in the mountain bike race on Saturday and my legs felt flayed. A Sunday in February rolled around quicker than I would have liked, and I found myself in Phoenix, Arizona with a lot of balls and not a lot going on in my brain. Let’s race. I’ll win. Sure I will.

The crit is the sort of creature that likes to lure you in with a sweet face and bite you in the nuts the second you’ve begun to trust it. This particular tiger in a zoo was held at the University of Arizona in what amounted to a business park. Lots of turns, not a lot to look at; good for focus, bad for the unseasoned rider.  I was 23 at the time and my motto was, “Fuck the world. I’m bigger than that.” Mind you, the day before I’d finished DFL and had gotten a good dose of “You ain’t nothin’ but a little shit with a big ego.” I don’t know if any of you have ever been 23, but that kind of logic does not compute. Pass me a PBR, I say.

Alright, be a responsible reader here. Don’t let me bore you with the details of a bicycle race. The fact is, I was on dirt one day and on pavement the next, and long story short, some assface clipped my front wheel and I went down going 30 miles an hour. Let’s talk about the fractured hip. Let’s talk about the three broken ribs. Let’s chat for a moment about the fourteen-inch hematoma that wouldn’t disappear completely for almost three months.  Let’s talk about road rash that seeps through your pant legs and makes grandmothers in diners look at you and actually gasp the way grandmothers do in movies. Let’s talk about it, and then let’s forget it. Who cares anyway? I fell down. We all fall down. There’s nursery rhymes about it. Get. Over. It.

That’s all well and good, but what I really want to talk about is a night, two weeks later, in a 4000 square foot house I did not own.

In the dining room: a trainer, my road bike, and my dirty mountain bike.

In the kitchen: various powders and energy bars and bibs hanging on door handles.

I was the luckiest 23 year old alive. A Mavic rep I met by accident while wrenching at the local shop told me he needed someone to move into his huge rental out by Lake Mary. I moved in. It was a massive house with a hot tub in the back yard and a garage perfect for wrenching on my own bikes. The luckiest. Goddamn. 23 year old. In Arizona.

This lucky sonofabitch was lying down in his bedroom upstairs, his hip still bleeding, the bones inside still broken and aching because this lucky kid did not have health insurance. This lucky kid woke up sometime around one in the morning. His hip, still seeping blood and pus after so many days and nights of healing, was stuck to the sheets of his bed because pus just wouldn’t stop pussing and the pain just wouldn’t stop paining. This is about a moment a few days earlier when that lucky little kid decided it would finally be okay to shower, that the open wound on his hip might be healed enough, but it wasn’t, the tricky bastard, the hot water hit it and the pain was akin to living through a plane crash, and that lucky 23 year-old hit the floor of the shower and blacked out from the pain.

I am explosion happening. I am combustible. I am ground zero in a particularly intense battle in a useless war. I am history.

What I’m telling you is my life story. I’m telling you about the end of my racing career and my foray into the world of working for a living, of being someone I’m not, of being a former rock-star who used to sign tits and who used to stand on podiums, but someone who now goes to work and pretends to be working when the boss comes around. The story’s in the downfall, right? That’s plot. Then we reflect on it all, and that’s character development.

Here’s the twist Shyamalan ending that you were perhaps expecting, but seeing it in action still feels gratifying because we’re all suckers for surprises.

The twist ending is this: I’ve been hanging off Corey’s wheel for most of my life.

Not Corey’s in particular. Don’t be stupid. Come on. Keep up.

Let’s get back to the dirt.

It’s several years later. I’m riding my singlespeed up a particularly grueling piece of shit climb somewhere in Colorado. I’m fatter now, I’m lazier now. I spent several years as a teacher and now I’m tired and cynical. One student tried to sabotage my truck’s gas tank with sugar. Another student’s mother threatened to slash my throat. No lie. So here I am, fat and probably a little drunk, climbing up some loose granite climb outside Colorado Springs. I recently lost my job and I have no idea how I’m going to pay this month’s rent. I have a wife and a dog, but no goddamn job. And I’m climbing.

On gravel that refuses to clasp hands with your tires.

On singletrack that washes out in hard rains.

On an orange bike with one gear that’s always just a little too tall.

And after all this time, I’m still hanging on Corey’s rear wheel.

Except now, Corey is my wife. She’s saying to me, “We’re almost there. Just keep pushing.”

There won’t always be Corey’s rear wheel for you to follow.

Take advantage of it while you can.

19 thoughts on “A Brief Story About Avocados and Lions”