The weather here in Colorado has been ridiculous lately. The warmest January on record was followed by the snowiest February on record, and now in March, it’s in the mid-70s. When I got back from my business trip last week, all the snow was gone. So what’s a fat-biker to do?

Take his fat bike to the skate park, of course. Photos below (courtesy of Stephen Downey).

This is part two of the Meriwether Fat Bike review, in which I outline how rad or sucky it might be. If you just want to look at pretty pictures, do yourself a favor and scroll through, then go to MERIWETHERCYCLES.COM and just buy one. It’s that good. I don’t ride bikes I don’t like. Those days are over; at this stage in the game, I ride shit that’s rad, and this is one-hundred proof rad.

For the more discriminating bikers among us, read on. I’ve got lots of interesting shite to say.

I asked Whit from Meriwether to build me a fat bike that would also be good for running 29+ so I could do some bikepacking this summer. I’ll do another write-up when that adventure actually happens; at the moment, I’ve only ridden it as a fat bike. This is a do-anything rig, ready for snow and ready for getting weighted down with packs for a multi-day trip. The chainstays are as short as they can be with the 5-inch tires, and Whit put swinging drops on there so I can customize the ride depending on what wheels and tires I’m rolling at any given time.

The stays are pretty wide, but I haven’t yet hit my heels on them, so that’s good. There’s a learning curve to riding a fat bike; it’s just so damn wide. But this was no worse or better than riding any other fat bike in that regard.

She’s damn sexy. The lines are sleek. I wanted a curved top tube for aesthetics, and Whit really nailed the aesthetics for sure. If I had to do it over again, though, I might go with a straight top tube. Fat bikes have a really high standover, and I definitely whacked my nuts more than once on the inaugural ride. It’s something I’ll get used to (moving out of the way, not whacking my nuts), but I guess the question is, are aesthetics more important than my testicles? 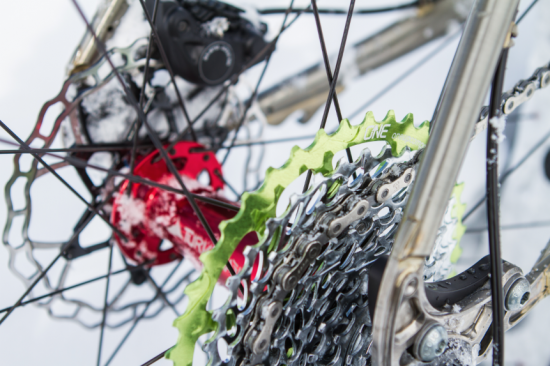 I wasn’t sure if I wanted to run 1×11 or just do 1×10. OneUp Components was awesome enough to send me their 42T cog to try, so I’m running a 1×10 with this cog. Tell you what: with this thing, I see no reason to drop all that coin on 1×11. It shifts smoothly, it gives me the climbing gear I need when the snow is thick, and it costs a fraction of what just the cassette of a 1×11 setup would cost. High marks for this. I see no downside so far; we’ll see how she does in the long run, but I’m confident. 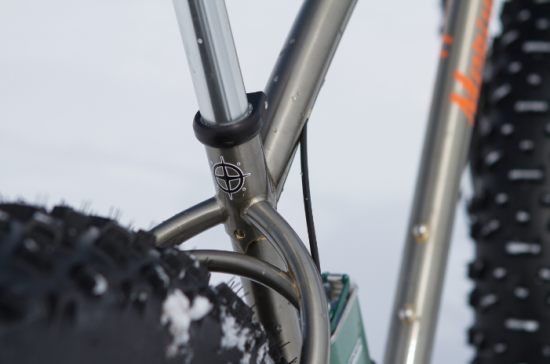 You just never really know what you’re going to get from a custom builder. The default is to hide your mistakes with the paint job, but I wanted the bare steel look, which Whit grudgingly did for me. When I got the frame, I expected blemishes; I think that’s what gives the bike character. It’s great to be able to see the builder’s process. It makes the bike feel like it has personality. Whit does such a great job with his welds, though, that there are few imperfections, and the ones that do exist are just cosmetic. This frame is burly.

The oversize headtube is fine. Look, I just don’t shred hard enough to notice the difference between OS and 1 1/8. Maybe some people can, but I don’t. I can tell you this: for a steel frame, this flexes remarkably little throughout. I can stand up and crush, and feel like I’m jumping forward on a more rigid material.

XT brakes were a no-brainer. They work, they feel good. Nuff said. 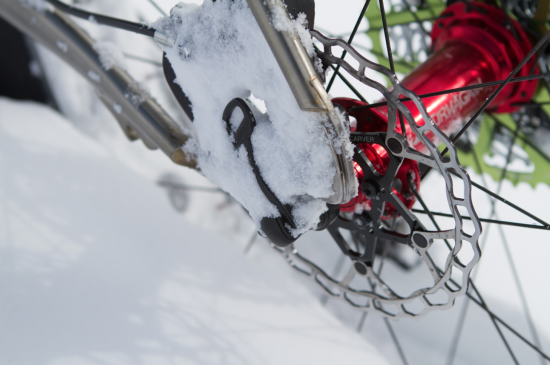 Carver Bikes provided the brake rotors to mate with the XTs. Carver is a small operation out of Maine, my former home. They’re a good bunch of guys, which is enough reason to support them, but their rotors are light and tough, which also helps. It’s two-piece construction, and while I don’t have enough time on them to tell you how they perform longterm, so far, so good.

They’re touted as the lightest 2-piece rotors on the market, and I can believe that. It’s a bit lost on the fat bike, since it’s a pig overall (as all fat bikes are), but the price was good and they are so far as durable as I need them to be. 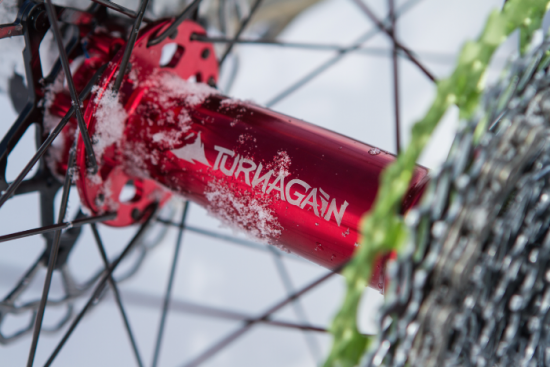 Dem boys at Turnagain came through again for me. They’re the sister company of Borealis Fat Bikes and they are continually tweaking their products to dominate the Fat Bike world. The first iteration of Turnagain wheels didn’t blow me away, but these are a vast improvement. The hub engagement is good, and the end caps stay in place when you’re putting the wheels on or taking them off. I opted to NOT GO WITH CARBON FAT BIKE WHEELS BECAUSE WHY THE FUCK WOULD YOU RIDE CARBON FAT BIKE WHEELS? End rant. 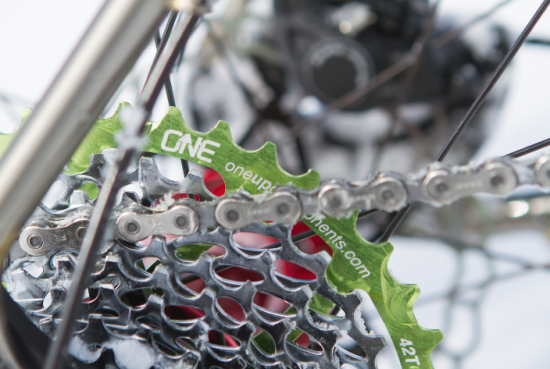 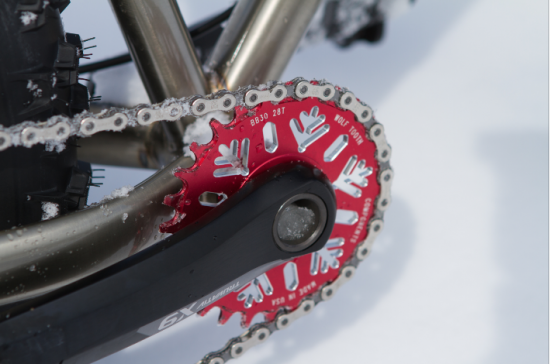 Wolf Tooth Cycling makes a rad ring. The narrow-wide chainring is a must. It’s mounted on an X9 crank from SRAM, which is rugged and reliable. Overall I’m happy with the drivetrain. Any drivetrain I don’t have to think about is a good one in my book.

Like I said, the weather turned whacky here in Colorado, so when I got back from a business trip to California, the sun was shining and the snow was gone. So I did what seemed most logical: I headed to the skate park to see if I could hurt myself and break the bike.

Okay, so this is not really likely to tell you much about how it handles in the snow, but there was a lot to be learned from riding this beast in the park. First off, it really steers. My big complaint with fat bikes is the sluggish steering, and while you’ll never escape that with 5-inch tires, I found that the geometry of this bike coupled with the suspension from the Rock Shox Bluto made this bike cut into corners in ways other fat bikes I’ve ridden just couldn’t do. I felt stable in turns and wall rides. It rides like a mountain bike, not necessarily like a fat bike. 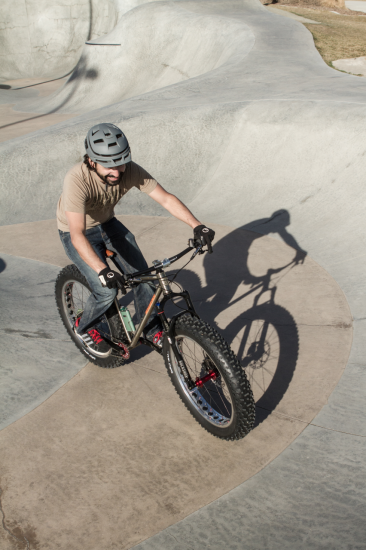 Yeah, yeah, so this is turning into a stroke fest, isn’t it? I’m sure you’re asking, okay, so what’s the downside to this bike? Well, it’s definitely heavy, but it’s steel, so what do you expect? And the BB shell is super wide, so the Q-factor is off the charts, but again, this was my own making: I wanted to be able to fit 5-inch tires with enough clearance I wouldn’t hear the tire dragging on the stays.

So what’s the real downside?

Yes, as rad as I think fat bikes are, I still really believe they’re seasonal bikes. I’ll probably ride this on dirt occasionally, but it just can’t beat my 29er for summer singletrack. Luckily, Meriwether Cycles does more than just fat bikes. He does mountain bikes, cross bikes, etc. Essentially, Whit builds bikes for adventures. Tell him what you want and you’ll get it. 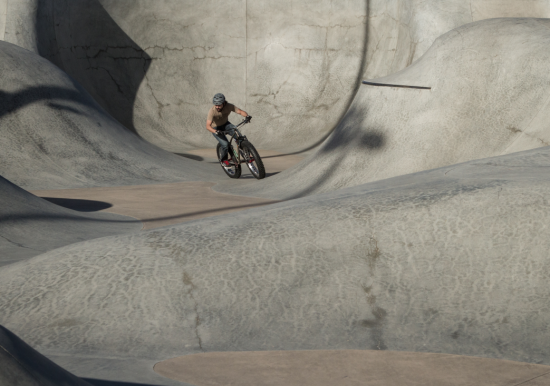 That leads me to the best thing about Meriwether: Whit listens. We had a very in-depth conversation over the course of months about what I wanted from this bike. It was by no means slapped together. All the details were discussed, from geometry to cable stops (which, by the way, the internal routing is awesome). Whit is an attentive builder and he wants to get you exactly what you want, and he will ask and re-ask questions until he’s sure he knows what you want. I loved the discussion about the bike; if nothing else, it got me super stoked to see the finished product. 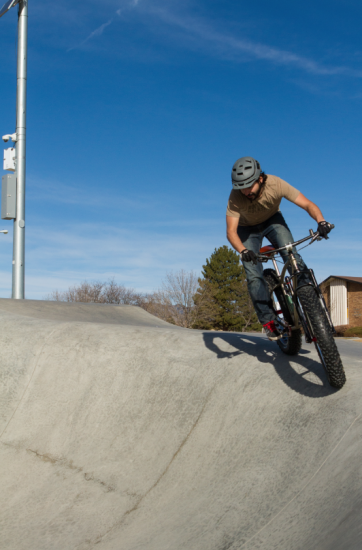 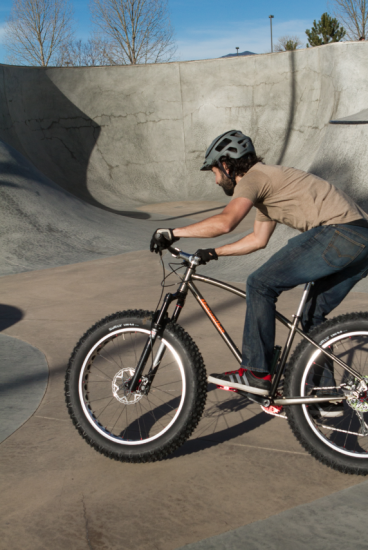 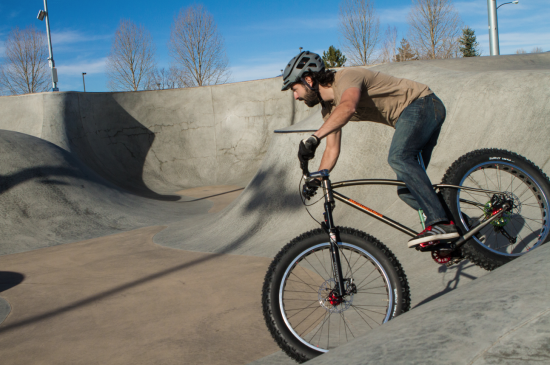 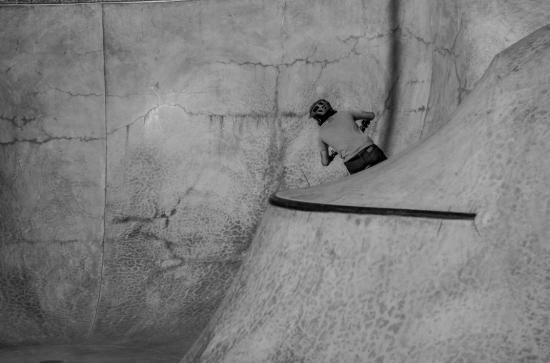 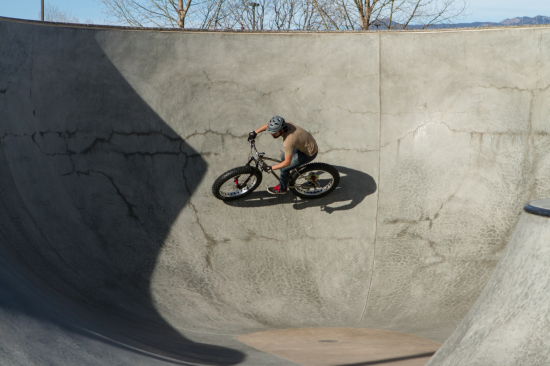 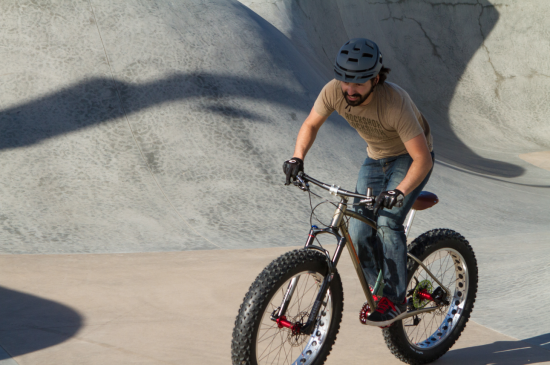 So, the last word:

As a grudging convert to fat bikes, I can tell you I’m stoked I have one now. I’m also really glad I went the custom steel route for a lot of reasons, but most importantly among them is the ability to make a bike that fits my body and my riding style. Whit was awesome to deal with and the finished product was near perfect. I know this sounds like a stroke fest, but I honestly can’t find much wrong with this bike aside from it being heavier than a carbon bike. If you’re going to be racing, probably not the best choice for you, but how many racers do you know that get custom steel frames to race on? That’s a dying breed.

So I highly recommend Meriwether Cycles if you’re looking for custom steel at a reasonable price and a really good experience. Whit’s attentive and good at what he does. Check out Meriwether. 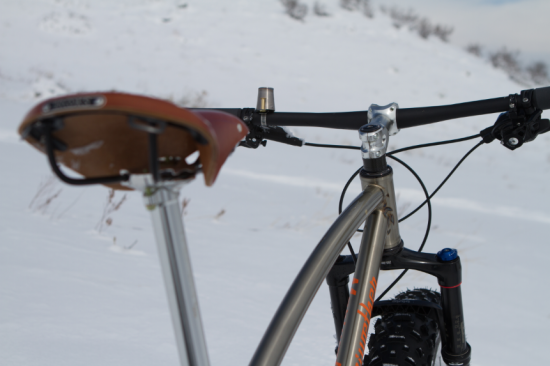 16 thoughts on “Meriwether Fat Bike Review: How D2 Got His Stoke Back”