A while back, I was hanging on the patio of my neighborhood bar with a bunch of buddies sharing stories of recent adventures. You know, some good old fashioned beer drinking and bullshitting. A few of the guys are kayakers and were telling me about some of their latest runs in places I have never been. Awesome tales of wild horses, interesting rock formations, river otters, and a bunch of other stuff I wouldn’t mind seeing for myself. The only problem is, I don’t do white water. Screw that.

It might have been the whiskey, but I had an idea! Maybe these kayak nut-jobs knew of some cool canyons with sandy bottoms where I could ride my fatbike. Since most creeks in the area can only be run after a hard rain (flood) they are usually pretty dry most of the year. It had been a couple months since the last rain, and everyone at the table started listing off places faster than I could write them on my bar napkin. My buddy Jeff recommended that I go to Tonto Creek first. He hopped on his phone to check the flow rate and said there was little to no water at the gauge. So I went.

About 45 minutes out of town, I turned on to a dirt road and found a place to stash my truck. Jeff’s directions were simple:

Ride up the dirt road until you see a bridge. Hop the fence and ride down stream until you hit civilization.

Easy enough, and that’s exactly what I did. The first few miles were sandy and dry river bottom. There was some boulder hopping, then some cliff shimmying, all capped off with a little cold water swimming. I also learned that my fatbike can be used as a floatation device. It was a long day and ended up being a bit of a death march. But I got to see some places I normally wouldn’t otherwise.

I had a GoPro on most of the day and I made a little video of the misadventure. I am not a fan of all helmet cam videos so I kept it under 2 minutes for you. It’s just a little taste of what the scenery was like. 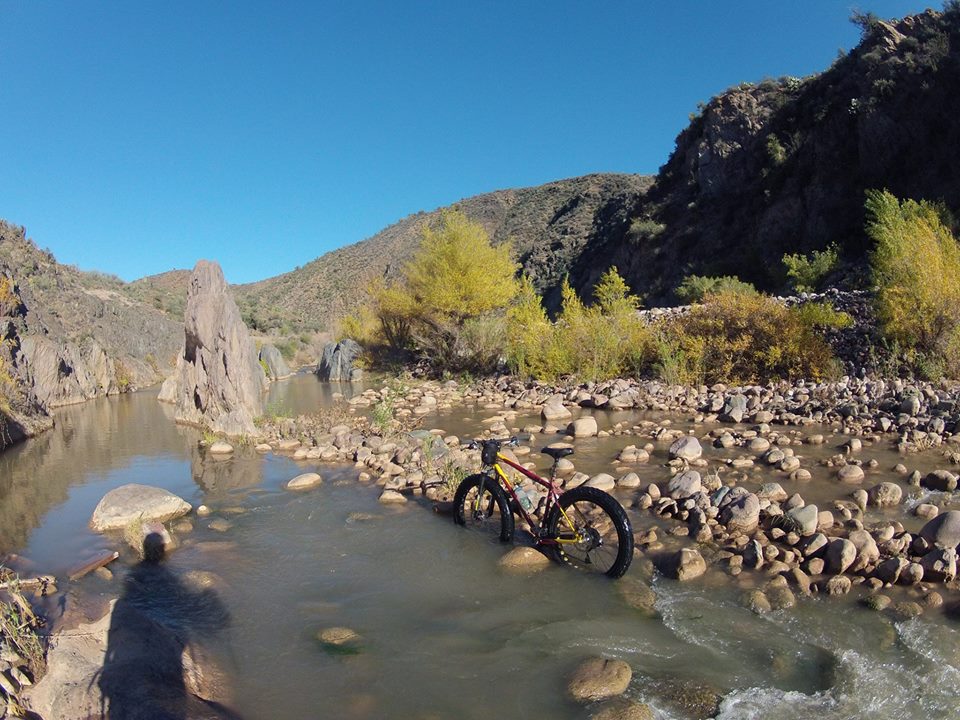