As usual it’s taken me far longer than anticipated to put down some words on this one. Fuck Yeah February has been ratcheting up and time is precious.

The last time I toed the line for 12 Hours of Papago three years ago I didn’t even make it two full laps. In an effort to “train” for Old Pueblo that year I came in with “goals”. But I paid the price for straying from my roots and crashed early, and hard. Dirty found me wandering in circles at the top of a climb and had the good sense to pull my sorry ass from the race after a severe concussion showed its effects. So with that lesson in mind, this time around I formed a different strategy. Come out strong and win the party division.

I called for backup with a teammate in the form of two-time 24-Hours of Old Pueblo champion Michael Melley. Not only does he straight crush on a singlespeed, the man reps DC like a boss. He’s also the brains behind our beloved Short Track Papago series here in Tempe. And since this race runs those same trails, I figured we’d do it STP style. Fast and drunk, one beer per lap, handed up in the exchange.

Rolling up to the start area I was still reeling from the night before. Caveman happened to be in town that week so we got a jump start on the race prep by showing complete disregard for what most would consider proper hydration and taper prior to an event. We saw the dark side of 3am before it occurred to me that the race started in four hours. So I took a quick nap and dragged myself up to the park. I was prepared to take the first lap, although not excited to, when Melley and I had this exchange (his words):

Melley -“You wanna go first or should we ro-sham-bo?”

S. Jesus – “Sounds good….(crack of beer can)….(large flask hits the table) want some?  It’s about half full….it was a late night”

Melley – “uhhh….not yet, it’s not 7am yet” (Note to self Mike, you are wearing a DC jersey and this is not your normal 12hr race effort, you are not solo, and you are here to have a good time, you better have some beers.)

The course is an eight mile loop through Papago Park. Miles one through four wind around the southern portion of the park and are filled with loose, punchy, little bastard climbs. The second half follows a good length of flat bullshit canal path out-and-back before returning to the singletrack leading back to the start. It’s far from the best riding in the Phoenix area compared to places like South Mountain and the Black Canyon Trail. But for an urban park so close to home it’s enough to scratch the itch. I’m all for playing out in the desert wilderness, but there is something intriguing about turning laps in a 12-hour adjacent to an eight lane highway. Dirty and I went for a booze cruise through here just last night, and we couldn’t help but think of how much more fun we were having than those folks on the Loop 202. 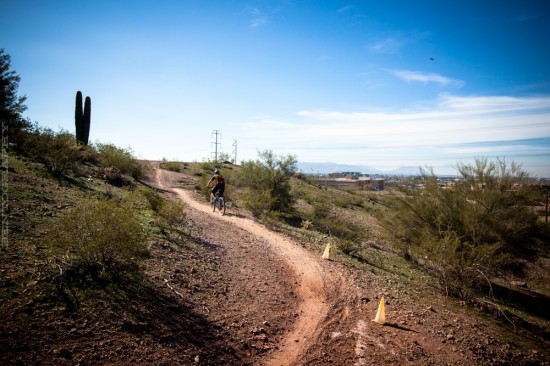 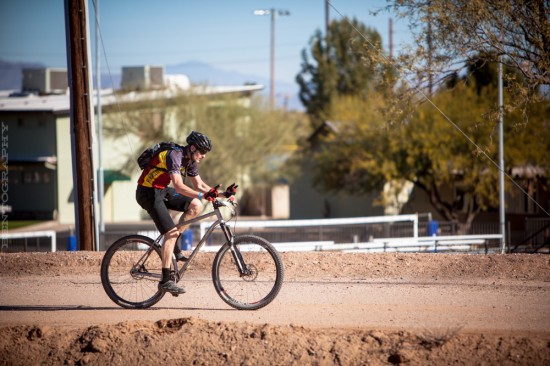 We traded two at a time for the first half of the race knocking off solid 28-30 minute laps. But around 2pm the pace and choice of racing style eventually started to catch up to us. Cramps began to strike and knocking off twosies was becoming less enjoyable. However we were informed that we had a solid grasp on first place, which was unforeseen to some watching us trade beers at the tag line. So we switched to one lap per, and that seemed to keep us in a groove for the rest of the afternoon. We lucked out with intangibles and managed to stay clear of wrecks and mechanicals, so going into the final two laps I seemed to find a much needed third wind.

At the end of the day we each put down 11 laps, and hung on to take the win in the SS Duo category. I finished our last lap to Melley and Caveman fully prepared to shower me in cheap beer. Couldn’t write a better ending. Considering that our only plan was to ride hard and drink some beers, taking home a little hardware was a nice bit of redemption after my last outing here. And our buddies Ben and Vince took third in a solid effort for Sunday Cycles. Not to be outdone, friend of DC Mel Liebling fucking hammered the women’s solo SS division with 17 laps. And our boy JP was in the lead for the geared men through mid-afternoon, but we had to watch as he suffered through a re-injured ankle and was forced to exit the race. 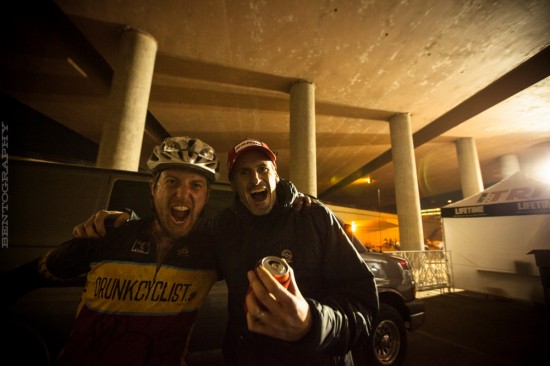 Yes yes, good times all around. While it’s always preferred to be out among the wild ripping some amazing trails, it’s nice to know you don’t have to stray far from home to ride hard and bring the party.

SSAZ went down last weekend and it took me the better part of last week to recover. And I didn’t even fucking ride the whole course. More on that to come, fashionably late as always. For now it’s full steam towards Old Pueblo. Fuck Yeah February is in session.