Saddle up, bitches. It’s gonna be a sloppy comments section. You wanted a real rant? Here it is.

Well, we all remember this, don’t we? 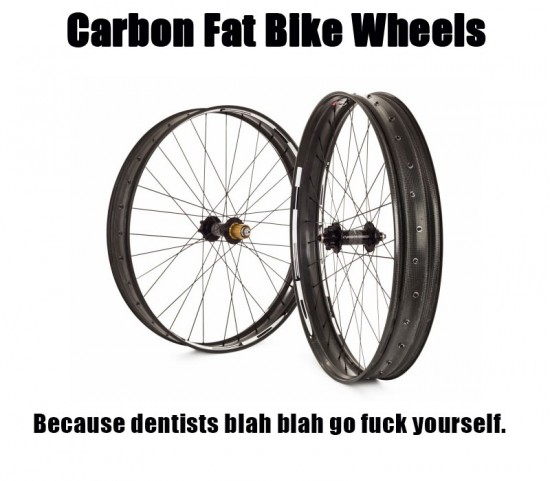 Many of you seemed to miss the point of my post slightly, perhaps because I only wrote about 40 words (which apparently now constitutes a rant). So let’s start a real discussion based off this, my REAL rant.

First and foremost, I need you to understand that I HAVE ABSOLUTELY NOTHING AGAINST CARBON as a material used for making bicycles. I also have nothing against carbon fat bike rims, as stated (well, except for the fact that they’re completely antithetical to a bicycle that weighs 45 pounds to begin with).

My issue is this:

There were some people who immediately understood why I was shitting on the HED carbon fatbike wheels. Others took the opportunity to call D2 a fag or whatever. We’ll ignore those twat nozzles because I don’t pick on preschoolers. But I want to talk to you, all of you who said “Who cares if it’s carbon or steel or bamboo or a pile of donkey sperm?”

Well, we can shout and scream at Specialized all we want, but it’s YOU that’s really ruining it for the rest of us. That’s the attitude that’s boxing us out. That’s allowing the world of mountain biking to get the train run on it like some coke whore at a Rick James concert.

I have nothing against carbon. It rides well. I dig it. But here’s what I don’t dig: mountain bikes that cost $10,000. Rims for a fat bike that cost $1500. And no, I don’t hate it because I can’t afford it. Chances are if I could afford it, I wouldn’t buy it anyway. No, I hate that shit because it’s making our little piggy bank sport into a  Bank of America.  It’s taking a good thing and making it blingy and shiny so the price tag goes up. And you know what happens then? We get priced out of our own world. You say, “hey, if some dentist can afford the wheels, more power to him. Let him spend his money.” What you don’t realize, however, is that the more he spends his money on shiny bullshit that doesn’t really improve our sport or our culture, the more you have to spend YOUR money just to remain a member of this culture.  PBR used to cost $1 at the bars until hipsters discovered it. Now it’s $8 on a Tuesday night. Dentists are the hipsters of the cycling world (NO, I have nothing against specific dentists, either. Think of them as a metaphor).

I’m very fortunate. I work in the industry, so I get sweet deals on stuff. Yet with all these deals I get, I still can barely afford the prices that have skyrocketed over the last decade. When I started working in the bike industry, shit was expensive but not unaffordable. A kid who saved his pennies could get a killer race bike that might propel him onto the podium and a race career could be born. Now a fucking Strider costs almost $200. Are you fucking kidding me? We’re taking a future away from a kid who wants a bike. We’re keeping that kid on the couch, and that’s the shittiest possible thing we can do as a cycling community. Because some day, that kid will grow up to be the dude that brings the bottle of whiskey to the cold night ride. If he’s not there, you’re cold. And worse, you’re sober.

The bike industry, and more specifically the mountain bike industry, used to pride itself on the grassroots nature of the thing, the idea that the trail was most important, and yes, they were always there to turn a profit, but they catered to all of us, not just the richest 1% of us, or the ones who had connections in the biz. Mountain biking was something we could all do, and the industry WANTED us to do. Now it’s a commodity. Now it’s another goddamn stock or bond to be traded. Now it’s the fat cats. No one exemplifies this bullshit more than Specialized. They are the Bank of America of cycling. Fuck them, and fuck carbon fat bike rims for everything they represent. But fuck you too for letting it happen, and fuck me too for not speaking out loudly enough against it.

They might ride like a fucking Ferrari, but you know what? If I had the money for a Ferrari, I’d still drive a beat up pickup truck because my money, my time, my effort, and my life is worth more than some fucking shiny piece of shit that doesn’t make me a better person and doesn’t make the trails any more awesome than they already are.

I care about this industry a lot because I think bikes are the best thing about this upper-middle-class country we call home. I think they’re the best thing about this wide world that I just haven’t seen enough of. And I’ve been around in this industry long enough to see good people get priced out. Fuck that. I’ve been priced out of buying a car. I’ve been priced out of buying a house. I’ve been nearly priced out of buying real food, for fuck’s sake. I feel pretty powerless when it comes to that stuff, but in the bike world, I’ve got a stake in the game and my cards are on the table. I’ll do what I can to fight the corporate bullshit that squeezes us out because some chode with too much money to spend ran out of alimony payments and wants something shiny he’ll ride twice a year. I can do without a house and without a nice car. I can live on Ramen for months on end. But I WILL NOT GO WITHOUT MY BICYCLE.

So in summation, I reiterate: stay true to what bikes are about, not what the industry wants you to think it’s about.

Now go ride a bike. We’re all friends here because we’re all on two wheels. Best to remember that, isn’t it?

68 thoughts on “The Sunday Spore with D2: “A Treatise on Carbon” Edition”