Travis McCabe has had a breakout year in the U.S. domestic road scene, taking big wins at Nature Valley Grand Prix and the USA Cycling Amateur Road Nationals Crit. In chamois, he’s known as T-Money, in street garb, he goes by Rufio. We’re super stoked for the kid out of Prescott/Tucson not only because he’s kicking ass on the bike, but because he’s one of the nicest dudes you’ll meet, and he’s always down for a good time. Might as well start calling him Smiles and Miles, because that’s most of what he’s doing these days.

I made it to a couple stages of the Nature Valley Grand Prix last month to watch Rufio lay down rubber and induce serious pain. He took the the stage win at the Menomonie Road Race and does a good write-up here for those of you who like reading about tactic and whatnot. He also took a respectable second place at the Uptown Crit and promptly chugged my beer upon finishing. Travis is a straight baller and we caught up with him to ask a few questions in typical DC fashion.

Drunkcyclist: If you were a stripper, what would your stage name be?

Travis McCabe: The Mop, because I mop up all the wetness.

DC: Did you really do El Tour de Tucson on an Elliptigo?

TM: Oh yea! In Daisy Dukes with a neon shirt and aviators. I did the 50-miler. Two and a half hours of Elliptigo’ing in style. PT introduced me to the Elliptigo like three days before El Tour and I was like, “Yea, fuck it I’ll do it.”

DC: Give us a little background, where are you from? Why bikes?

TM: I’m from Prescott, Arizona. It’s been in the news recently for a pretty tragic event. I’m super proud to call Prescott home. Born and raised there, it’ll always be my home. I started riding bikes my freshman year in college right in between running season and summer. Didn’t really want to cross-train for running anymore so I decided to ride and started working at a local bike shop. I realized that riding bikes was way more fun than running would ever be so I ran one more year at junior college, hated it, hated running, and started riding full time. Raced that year and went from a five to a two. The guys in Phoenix told me that if I was really serious about doing this, that I should move down to Tucson where the cycling community is. So I’ve been down here ever since and now Tucson is my second home.

DC: Speaking of running, you had a little run-in with Cupcake a few years ago right?

TM: Yea! I think that was the first time we met. I was like, “oh shit, this kid’s going to just annihilate everyone in the beer mile.” Then you showed up with no shoes on and I was like “ah fuck I can beat this guy.” Ended up throwing up all over the place. Panda Express two hours before a beer mile isn’t a good idea. Threw up all over, so did Snake.

DC: Did you have to buy new pants after Menominee to make room for your bigger cojones?

TM: No, I just had them hemmed up a bit, I took them to a tailor. Much cheaper.

DC: How did that beer taste after the Uptown Crit in Minneapolis?

TM: Ohh man, so good. It almost tasted like victory.

DC: Have you ever rubbed one out in your altitude tent?

TM: Yes. I’ve also had sex in my altitude tent. I didn’t last very long. It was just so hot, we were both pretty much high. There’s no oxygen. So we were just sweating and she was finally like, “this can’t happen.” So we turned the thing off and opened the vents and finished it off outside of the tent. I think that’s really the ultimate VO2 training right there. Like those 30 second, minute long efforts really pay off.

DC: The Boneshaker Project. Whose bone is actually being shaken here, at whom, and for what purpose?

TM: I don’t know how to answer that one. But hopefully all of our bones have been shaken after this season the way it’s been.

DC: Any relation to the actual Rufio?

TM: Nope, I wish. I think at heart I am. I don’t ever want to grow up either, and I think I like danger just as much as he does.

DC: You lost some teeth a while back, what happened there?

TM: I was still kind of learning the ins and outs of riding, you know, how to turn and stuff. Ended up learning the hard way by not cornering properly in dirt and eating some Dutch pavement. Lost some teeth. I was only five days into a five week long trip over in Holland. Got to take advantage of Holland’s universal health care system which was cool. I had fake teeth the rest of the trip, I still have fake teeth!

DC: I like the look without teeth, why the fakes?

TM: Well, I was seeing this one girl at the time and I tried kissing her with the fake ones in and they broke. So I only had one tooth in the front and I tried kissing her again and she wasn’t having anything to do with it, straight up denied me. I think that was the last time I talked to her. I tried calling her a couple more times but she was just over it. I don’t blame her either, I was just walking around with no teeth, proud of it too.

DC: Who in their right mind wheelies through the “techy” section at Whiskey 50?

TM: Dude I didn’t even need to. I was fucked because I took the wrong line and nailed a rock. There are just so many people there cheering and I didn’t want to unclip and look like a total chode. So I just manhandled my way through it and ended up with a wheelie. And kept it upright through there so that was pretty sweet. 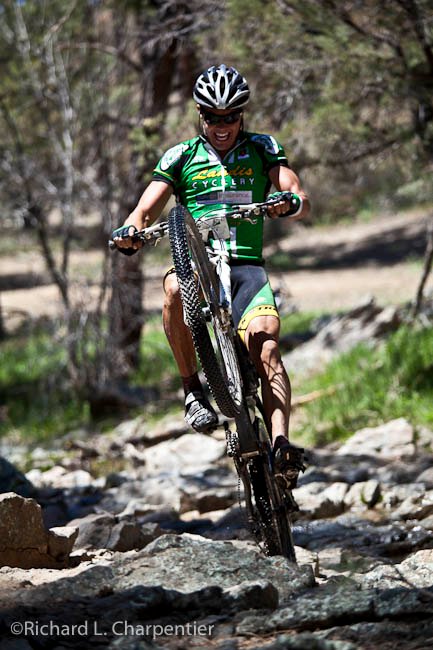 DC: So what’s next for you?

TM: We’ve got Cascade Classic starting the 15th through the 21st. After Cascade, I’ll be guest riding with some pro teams for Tour of Alberta and Tour of Elk Grove and also possibly the last crit at Interbike. It should be good.

DC: Are you a believer in beer as a recovery drink?

TM: Fuck yea! I’m amazed at how many other people on our team drink beer too. I wouldn’t say we are all alcoholics but we do have our own six pack after each race. Having an Australian and a New Zealander pretty much guarantees you’re going to have beer on you at all times. In Tulsa, I ended up on the bar dancing with my shirt off and pretty much blacked out at this biker bar. Coming into Nature Valley I thought I was going to be total shit. I was literally hung over the entire day of driving. I woke up and we were in Minneapolis and had to race. So yea, I’d say beer is an excellent recovery drink.

So there you have it. Do yourself a favor and get lots of beer on ice for the post ride recovery, and get that altitude tent ready while you’re at it. Cheers!