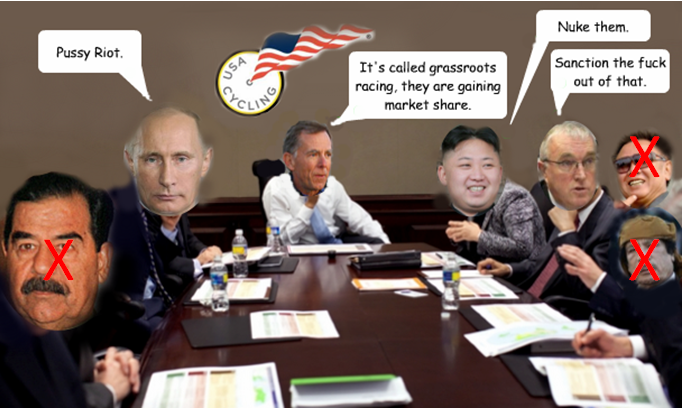 You’ve released a clarification of the “rules” for us mountain bikers to abide by and only one thing comes to mind; it’s a quote by Henry David Thoreau, “Any fool can make a rule, and any fool will mind it.”

I’m not sure which planet you live on, this is Earth by the way, and we are talking about America, which last time I checked is a democracy, and for your clarification, means we live in a society for the people and live by rules that are in the best interest of the majority. In our small-ish cycling community, recent consensus says your organization is full of shit and people are tired of it. Have you looked at the comments on your facebook recently? You try and force your way into the scene but we aren’t just going to follow suit like mindless cattle and subscribe to your crap, sorry.

Cycling, as overseen by USAC, is a system imposed by well-meaning paternalists and rationalized with fuzzy sentiments about caring for the continued development and well-bring of the sport. But it is, nonetheless a deeply flawed and overbearing organization that’s holding mountain biking back. A solution to your problems is not to restrict members their rights, but allow them to do more, or just continue as it has been (e.g. race unsanctioned events that pay real dollars). Of course, this isn’t something you would entertain because once you give up that last bit of power you have, you’re toast, kaput. You have an inferior product and seem to be clueless on how to appease the mountain bike community.

You see, what’s great about the internet  is that it’s easy to look up history. In your case, that’s not good. I recommend reading Les Earnest’s articles entitled, “USA Cycling’s History of Crooked Elections” and “USA Cycling Politics” for a better idea of where your ineptness came from and perhaps maybe you can put to use some of the information to avoid mistakes in the future, but I have a feeling it’s too late.

Another thing about the internet is you get to see people’s opinions on stuff. Take Eric for example, where he gave his thoughts on how you could improve:

Dear USA Cycling and the UCI,

I ran a 5k running race today. I didn’t have to buy any kind of licence. Entry was only 15 bucks. My heart rate went up. I raced some people. It was fun. No one gave me a hard time about categories or paperwork or not having sleeves on my jersey. Hundreds of other people showed up and did the same thing. If you want to grow the sport, look at that model, not telling people they can’t race events just because you don’t like competition from other insurance agencies. Thanks for listening (yeah right).

While in a state of contemplation, I often think about simple things, like how cool eyeballs are, or how whenever I smell TenFidy, I get a funny feeling in a different part of my body. Another cool thing about human beings is that we have this capability called thinking. It’s a way for us to decipher right from wrong, real from fake, and legitimacy from desperation. You come across as an organization in dire need of something, perhaps money, who knows. But it goes without saying that the enforcement of your “rules” act in the interest of USAC, and not the cycling community, which is unfortunate.

I particularly enjoyed reading the well thought-out perspective of Chloe Woodruff, who makes a living riding her bike and has dreams of racing the 2016 Olympics. The burden of your governance along with the ill-timed announcement of enforcing 1.2.019 should be enough to make you rethink the direction your heading and salvage whatever is left of this dying beast.

You’re called USA Cycling but this whole thing seems un-American. Mountain biking was born out of a bunch of hippies looking to have a rolling picnic and some friendly competition in the woods.

No thanks for your effort in trying to fuck everything up, but we will take our sport back now. Don’t let the door hit you in the ass.

Seems that Team Sho-Air has decided to deliver the first punch, we stand in their corner. Race the forbidden race. 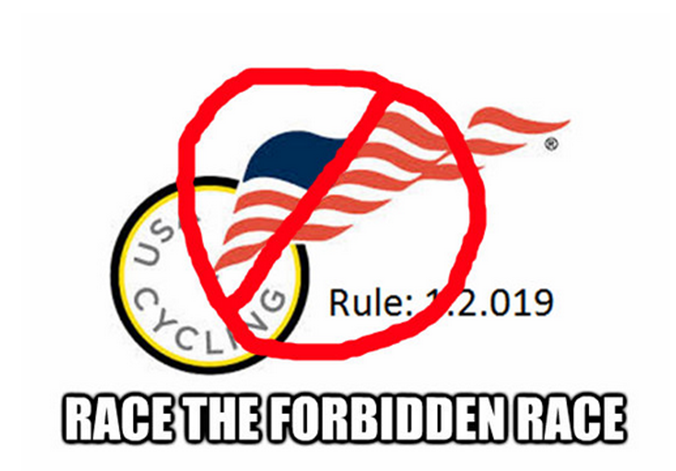 25 thoughts on “A Drunk Letter to USAC”