Much to my surprise, the highlight of my Interbike experience this year was not the parties or bike gadgetry. It was some books, a bunch of children, and a short bike ride. For those of you that know me, I hear you laughing and you can stop now. It’s a pretty well known fact that I don’t really care much for children. I am allergic to responsibility and I have made it this far without having any kids of my own (that I know of) and I intend to keep it that way. But this little interaction with the kids was powerful enough to even melt my icy heart just a little bit.

There is a great organization out of Nashville, TN called Ride for Reading and their mission is pretty simple. Get kids excited about riding their bike and reading books. This is the second year in a row that they have brought their mission to Las Vegas. Since I am pretty excited about bikes and books, I thought that I should probably tag along.

We met up in the parking lot behind the Sands convention center at 8:30am, which is mighty early in Vegas time. Even with the early start there was still a sizable group of people from all over the country. Pro racers, sales reps, shop owners and an assorted other volunteers. Since a lot of people flew in for the trade show without bikes, Pivot Cycles stepped in and offered up their demo fleet for the morning. This was huge and it dramatically increased the amount of people able to go on the ride.  We loaded up our backpacks, panniers, and trailers with hundreds of books and set out to the local elementary school with a police escort. Safely tucked under the wing of 6 motorcycle cops, we took the whole lane and got to proceed through every intersection safely. It was like being in a presidential motorcade and it was great to see the police officers just as into our ride as we were. 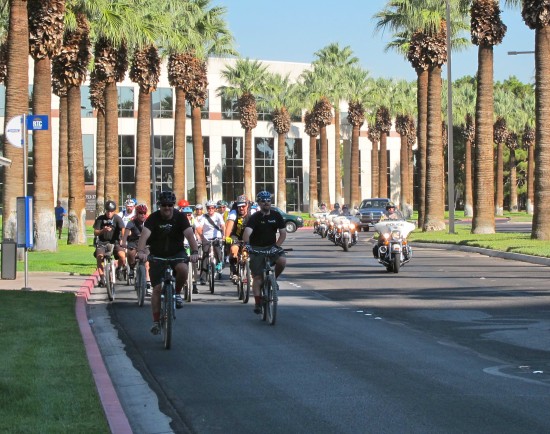 A short ride later we arrived at an elementary school that was basically in the shadow of the Las Vegas strip. It was absolutely the last place that I expected to see a couple hundred kids in a recess yard. We were greeted by lines of cheering kids and high 5’s as we rolled into the yard behind the police motorcycles. It was like we were the most wholesome rock stars ever. 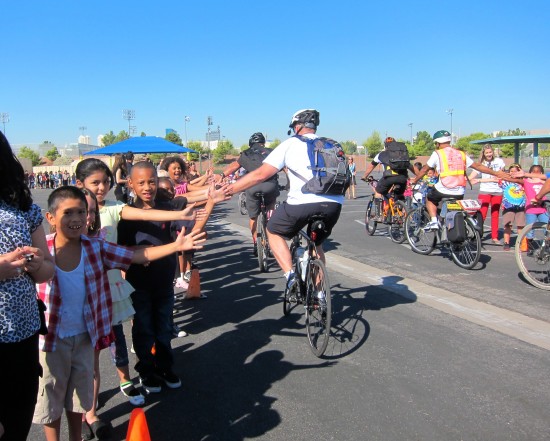 We dropped off our cargo and then we all watched in amazement as Matthew, the founder of Ride for Reading, mesmerized the children with his message. He got them to raise their right hand and promise to read their book at least twice, and promise to never throw it away. By the time he finished they were buzzing with excitement to get their books. You can see a great example of his skills here, give it a look. 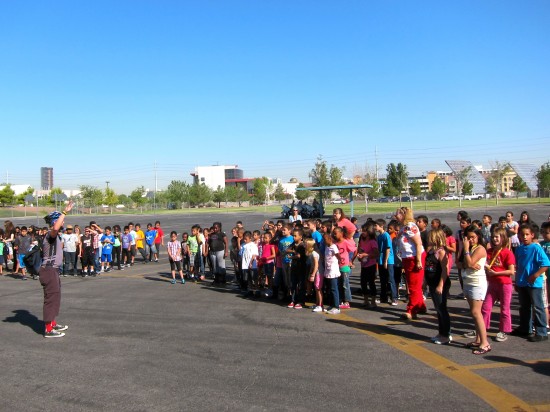 Then the kids were let loose to select 2 books that they can take home to keep. We had the opportunity to interact with the kids and help them pick out books that they were most excited about. This was a little overwhelming since my children social skills are near zero, but I made it out alive and I learned a whole lot. 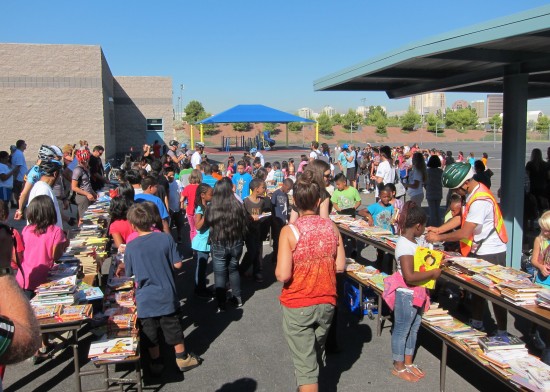 Since most of us had responsibilities to get back to at the trade show, we made a pretty discrete exit as the kids kept pouring over the books. The police officers went the extra mile and were nice enough to escort us back.

As we rode back to the convention center I wondered out loud why there wasn’t more people on the ride. It was a truly awesome turnout but right there in front of us was a building with thousands of cyclist in it. There were even booths set up inside by people who run co-ops, do community outreach, or volunteer to go to different countries to deliver bikes. Where were they? I will give them the benefit of the doubt and assume they just didn’t hear about it. But consider yourself notified. I want to call out every bike company in attendance and challenge you to show up next year and make this the biggest group ride that Las Vegas has ever seen. I dare you.

I can’t really express how cool this experience was for me. Getting kids excited to read is pretty darn important and this seemed like an incredibly effective way to convey that message. After all, what kid doesn’t like riding their bike? If you think this is something you might want to do in your area, National Ride for Reading Week is a great place to start.Their goal is to have 25 cities participate this year and I see no reason why that can’t happen. Why not your town?

I am in the process of rallying my troops to do a delivery here in Tempe, AZ. Because like my idol and mentor ODB said..We are about the children, we teach the children.

28 thoughts on “Tuesdays with Dirty: Drunkcyclist is for the Children”