It’s no secret around here that I have been bit by the fat tire bug. It has only been about 6 months, but my fat bike is now in direct competition with my single speed for the go-to bike of choice.  The fat tires open up terrain in the desert that would normally be completely miserable. It is allowing me to go deeper into the desert on less popular trails and up sand washes where I never would have thought to go before. I dig it.

My off the shelf fatty is pretty sweet, but it is definitely designed for snow riding. Although it is relatively light (33lbs) it is pretty oaf-like in technical terrain. After a couple big rides, I desired something that rode a little more like a mountain bike and a little less like my mom’s hybrid. I was discussing this issue with my buddy Angry Buddhist over some post ride pints one day. He tells me to check out this company called 616. They are new on the scene but they are based in Michigan and are diving nipples deep into fat bikes.

“Hey man, Michigan is cold with lots of snow. How the hell is that going to solve my snow specific bike problem?”

He just said “Trust me, check them out”. Angry or not, it’s generally good practice to trust a Buddhist.

Come  to find out, these boys aren’t new to the game at all. 616 Fabrication is one half Slingshot Bikes and one half Nuke Proof. It’s probably safe to say that these guys have witnessed more innovation and evolution of the mountain bike than you could shake a stick at. Joining forces and going at it with a new company could only turn out great. It also made me a little bit nostalgic. Nuke Proof was my hub of choice as a punk kid in 1996 when I built my first “real” wheelset.

After being put in contact with the crew over at 616, they were more than happy to produce a bike that would be associated with DC. They even said they could do something special with the paint to really set it apart. A couple months of impatient waiting went by and this is the final product:

I think it turned out pretty damn good. I have only been riding it for about two weeks, but a few things are really noticeable right from the start. First, it’s pretty damn light. With the exception of White Brothers carbon fork the the rest of the build is fairly modest with a SRAM X-9 drivetrain and Avid mechanical brakes. It tips the scale at just under 33 pounds. Essentially the same weight as my Aluminum fatty, except this guy is steel. And we all know that steel is nothing, if not real. That leads me to the second observation, it rides like a steel dream. Everything you would expect from a high end custom steel frame, except this one has 4 inch wide tires. The third observation was the noticeable difference in handling most likely due to the chain stays being a half inch shorter than what I normally ride. It rides like an actual mountain bike. Just what I was looking for.

Like I said earlier, I only have a couple weeks worth of rides on it. But I have been trying to put it through it’s paces right from the start. I took it on a little exploratory ride along the Agua Fria River last week with my good friend Turkey. On this day I learned that even when you slip and fall into a stream and sink, this bike still floats. Good to know. Here is a little video I put together from that day. It’s not as interesting as my last video, but it was a damn fine way to spend a Tuesday afternoon.

I also had the opportunity to take the bike down to Mexico this week. I was really looking forward to seeing how it rode on the sand and it didn’t disappoint. Good thing, because I have some plans for this girl south of the border. 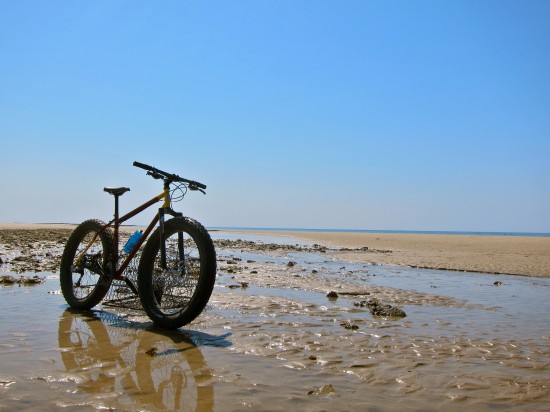 I will do a long term review of this bike in a few months after I get some more time in the saddle. My first impressions of this bike have been overwhelmingly positive. I think it is safe to say that there is now another legitimate choice for a fat bike on the market, and it’s 616.