Due to a combination old man winter lurking around the corner and a work load this semester that has been cockflogging me, I decided to make one last attempt for a long day in the mountains.  Nederland was the destination, the same trails where the rowdiness that was SSUSA took place, for myself and two friends.  We hit the trails under blue skies and warming temperatures, with no goals other than to spend the day riding trails.  For the first few hours all was going well, the trails were in great conditions, the pace was “gentlemenly”, and new trails were being explored.  My buddy who is tragically stuck with the nickname, “Man Pup” for the rest of his life, returned the the scene of last years debacle, to get his redemption on a jump that ruined his day.  Caley was busy showing us how great his new “play” bike was, and I was doing all I could to soak in the day, knowing it may be my last long mountain bike ride of the year. 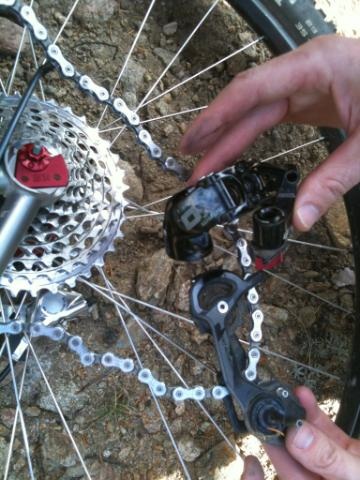 The riding was full of standard Colorado high elevation sterotypes, narrow sections of singletrack lined with trees, aspen trees with bight yellow leaves, and 13,000 ft peaks in the background.  Then things got interesting.  It was the standard “I was just riding along” scenario, and the next thing you know Man Pup’s rear derailleur was was in two pieces.  The pieces were removed, and a singlespeed was made, and a sigh of relief was breathed knowing the ride could still continue.  Despite a few wrong turns here and there, we finished the ride, and made our way back to the car.  Our smiles were wide, and spirits were high knowing that if this was our last long mountain bike ride of the year, we had done it right.  With the car loaded up we headed back down the hill, with one more stop to make.

We made a stop at Boulder’s Valmont Bike Park, which for the next hour was our playground.  Despite the fact that a Sunday afternoon is probably the highest traffic time to visit the park, it was an amazing place.  Pump tracks, slope style areas, skill loops, and dirt jumps all of which seemed to have been designed perfectly, were being used by riders of all ages and all sexes.  The highlight had to be riding behind a kid who was probably 4 or 5 years old, who appeared to be having the time of his life riding his bike on a mountain bike trail.  All in all it was exactly what I was hoping for a day with no other motivation that riding my bike with some friends.