This one hits close to home for me, and many of the cyclists in the Front Range are sending our positive vibes to the two who have been injuried.

Officials said that two cyclists were struck by a vehicle near Nebo Road around 8:50 a.m.

Colorado State Patrol Master Trooper S.S. Schwanke said two vehicles were driving eastbound, toward Boulder, when one of the vehicles made a right turn into a private drive.

The second vehicle, identified as a Ford Escape by a state patrol spokeswoman, swerved into the left lane and hit the cyclists, who were heading west, toward Lyons.

Schwanke said one of the cyclists was airlifted to St. Anthony’s Central, while another was taken by ambulance to Boulder Community Hospital. The extent of their injuries are not known at this time.

Charges against the driver are “pending,” Schwanke siad.

Read full article as well as a video interview with one of the officers on the scene over here at The Daily Camera. Judging by the picture below of the damaged bicycles, this was a serious collision between the automobile and the cyclists.  Please be safe out there. 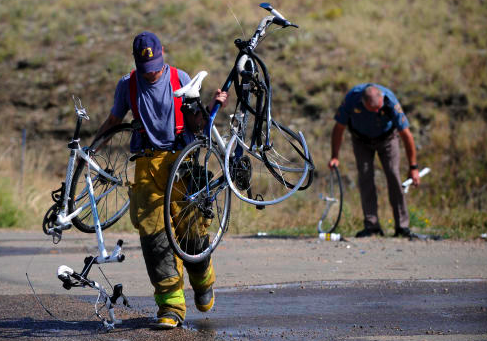