Needed a little study break from the books so headed out with some of the Fly V Australia riders this morning to stretch the legs. Boys were passing thru town, fresh off a Victory at La Vuelta de Bisbee, and now on their way to Tour of Gila. Damn nice bunch and awfully friendly. Sure were interested in those things ya’ll call saguaros…Yep, just don’t touch ’em. Right Snake?

Looks like there will be some heavy hitters in Silver City this year. Hopefully, Phil Z. can follow the right wheels and pull another rabbit from his hat! I don’t know about you, but I’m rather indifferent about some euro pro’s coming to a local race. It’s rather akin to the Yankees showing up at your local diamond and kicking your ass. However, it’s a great infusion of interest and notoriety in a race that was close to going the way of the dinosaur a couple years back.

WOW, what’s this?? Someone has a conscience? Glad to see someone actually admit guilt for a change and not say shit was slipped in mah drink the other night at the discotech, or must have been that shot of whiskey, or even a tainted supplement.

Switzerland’s Thomas Frei has confessed that he has doped for the last two years, revealing he tested positive for EPO after taking a micro-dose the evening before the early-morning test…

He said that his positive test on March 21 happened almost by chance, revealing details of how athletes try to avoid being caught. The previous day he had given himself a micro-dosage of EPO for the first time in three months. Frei claimed that if he had drank enough water after the injection, the urine test would not have shown the EPO. However, he did not drink the required litre of water even when the controller arrived at six o’clock the next morning.

Doped for two years, huh? Previously rode for Astana, huh? No fancy technological aides to beat the system, just make sure you drink enough water. I still have my doubts about this guy.

Well, now back to the books. Indirect & direct accounting methods, leases, annuity of bonds…I liked it better when I was sitting behind the bars and not this pile: 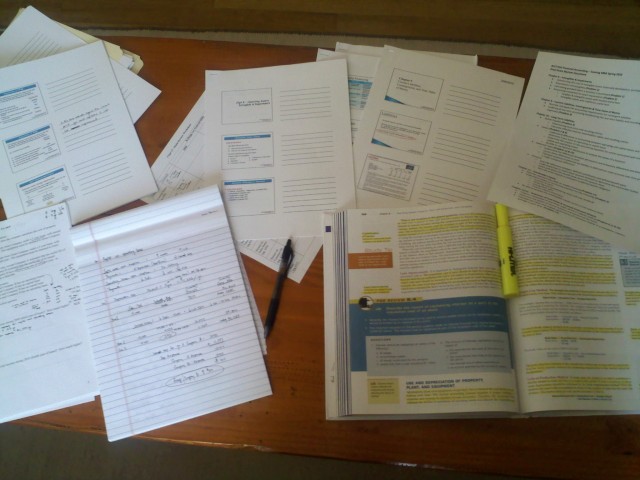 One thought on “Two Wheeled Tuesday”