I believe Floyd…was doped to the gills.

The Mennonite Sensation is now the first man ever stripped of a Tour title for a doping offense.

Something to be proud of, I’m sure. 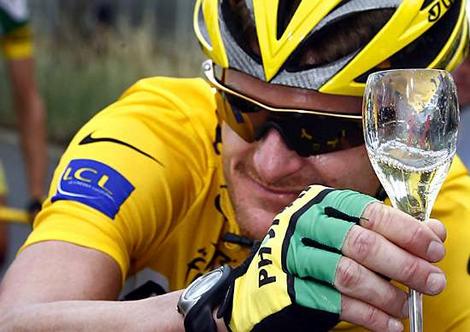 The International Court of Arbitration for Sport (CAS) dismissed Floyd Landis’s appeal of his suspension for doping at at the 1996 Tour de France.

In a 3-0 decision released on Monday, CAS confirmed the initial decision issued by a panel of the American Arbitration Association (AAA) on 20 September 2007.

“Consequently, Floyd Landis is disqualified from the Tour de France 2006 and is suspended for a period of two years starting from 30 January 2007. Floyd Landis has been ordered to pay the sum of $100,000 to the United States Anti-doping Agency (USADA) as a contribution towards its costs in the CAS arbitration.”

Travis Tygart, the head of the U.S. Anti-Doping Agency, said he was “satisfied with the decision.”

“This sends a message that no one – no matter what resources they have at their disposal – can hide from the truth,” Tygart told VeloNews.